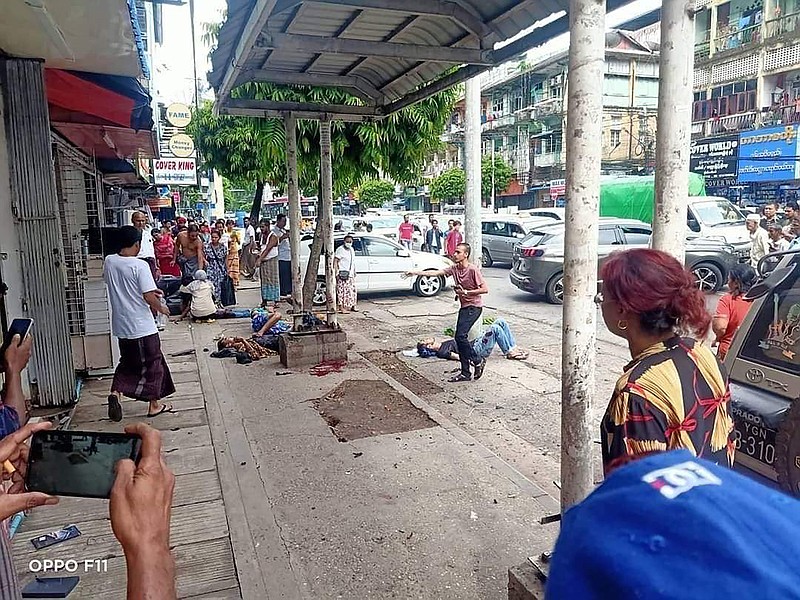 In this photo provided by the information office of Myanmar's military, four injured people can be seen lying on the pavement after an explosion at a bus stop in downtown Yangon on May 31, 2022. One person was killed and nine wounded when what authorities described as a handmade bomb exploded. The military and its foes blamed each other for the blast. (Myanmar Military True News Information Team via AP)

BANGKOK -- Burma's military government and its opponents traded accusations over a bomb that exploded Tuesday in the middle of the country's largest city, Rangoon, killing one and wounding nine others.

A story in Wednesday's edition of The Global New Light of Myanmar, a state-run newspaper, blamed the People's Defense Forces, the opposition movement's armed wing, but did not supply any evidence linking them to the blast.

It said the attack was made with a "handmade bomb planted by PDF terrorists at a bus stop" roughly one block from the Sule Pagoda, a city landmark. The blast occurred at 3:20 p.m. and a 30-year-old man died of wounds in his chest and abdomen, state media said.

A spokesperson for the self-styled National Unity Government, the main opposition body that loosely commands the People's Defense Forces and its various local units, pinned the blame on the military government.

"The brutal genocidal military has been carrying out senseless bombings and killings against its own civilian population across Myanmar," said a statement by Sasa, the National Unity Government's Minister of International Cooperation.

The Assistance Association for Political Prisoners says 1,876 civilians, mostly in cities and towns, have been killed by the security forces. Their figures do not generally include casualties of war in the countryside.

On Wednesday, the international human rights organization Amnesty International accused Burma's military of carrying out atrocities in the east that constitute war crimes and probably crimes against humanity.

It charges in a report that civilians from the Karen and Karenni ethnic minorities have been the targets of unlawful killing, arbitrary detention and forcible displacement.

"The world's attention may have moved away from Myanmar since last year's coup, but civilians continue to pay a high price," Rawya Rageh, Amnesty's senior crisis adviser, said in a news release.

The National Unity Government's Defense Ministry in a Wednesday statement said the ruling military "have sought to place blame on ethnic resistance groups and revolutionary forces in similar incidents in the past."

Urban guerrillas are part of the resistance movement, carrying out targeted killings of people associated with the military and bombings of establishments with official ties. But People's Defense Forces-affiliated groups in Rangoon posted statements on their Facebook pages denying involvement in Tuesday's blast and accusing the military of staging a provocation.

Another fatal bombing occurred Tuesday at an education office in Naung Cho township in Shan State in eastern Burma, for which state media likewise blamed the People's Defense Forces and National Unity Government.

The Global New Light of Myanmar said a headmistress died, and six education personnel and a civil servant were injured.

There were at least 260 attacks on schools between May 2021 and April this year, and explosions in and around school buildings accounted for almost three-quarters of that total, the non-governmental organization Save the Children said in a statement issued Wednesday.