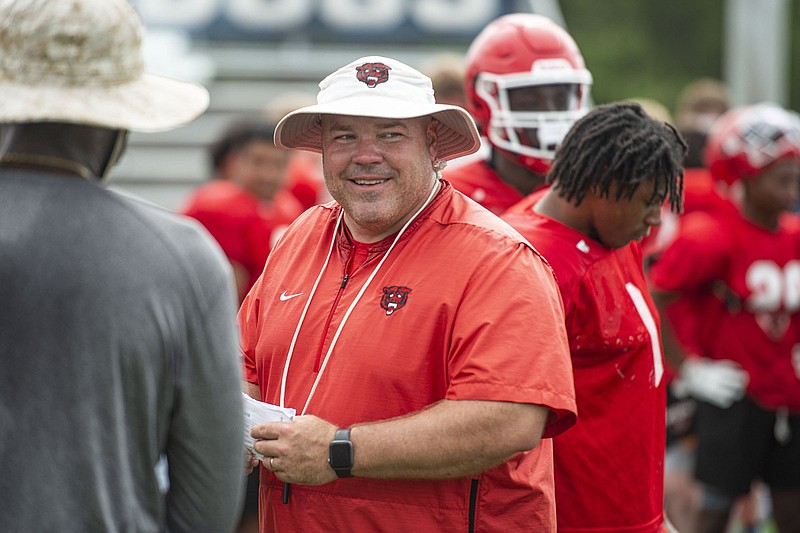 GREENWOOD -- Ryan Solley's playing career was marked by a tough, hard-nosed attitude that was equally matched by his play on the field.

Solley, one of the best linebackers to ever suit up at Fort Smith Northside, was selected for the Associated Press Super Team, led the Grizzlies in tackles all three years and was the Most Valuable Player -- an oddity for a defensive player -- in Northside's 12-6 win over Springdale in the Class AAAAA championship game in 1999.

Wednesday at a team camp hosted by Greenwood, Solley took his defense through the first live action against competition as the Grizzlies' defensive coordinator.

When Felix Curry was named head coach in January to succeed Mike Falleur, who retired after nine years at Northside and 30 overall as a head coach with 202 career wins, Curry turned to Solley, a veteran assistant coach to take his place as the defensive coordinator.

"Coach Curry is my mentor," Solley said. "I learned a lot from him. When we thought this was going to happen, it seemed like a pretty seamless step, you're going to be the D.C. and keep playing good defense."

Solley has coached the defensive line and linebackers through most of his years as an assistant coach under Darrell Henry and Falleur, and now wants his tenacious attitude to infect the entire defense.

"Absolutely, if you're not a tough, hard-nosed guy you can't play defense," Solley said. "That's just the way it goes, it doesn't matter if it's noseguard or free safety. The D-line and linebackers, I was heavily involved in them the last nine years, but I feel my personality kind of creeping into the secondary a little bit, a little fiery."

Solley will lean on senior Julius Thomas, who will move from defensive line to linebacker as well as junior Sebastian Garcia, who also makes the same move, as physical leaders on the defense.

"Julius Thomas is a prototypical Mike Linebacker," Solley said. "He can run. He's what we were known for in the 80s and 90s. He's a nasty kid. The defense really runs through him. We moved Sebastian Garcia from D-line to outside 'backer. He's a hard-nosed kid. They played a couple of years at D-line, and now they're seeing it from a different perspective. They're doing a good job with that."

"We feel like the five guys we put out there at DB in our 5-DB system are as good as anybody," Solley said. "We can man them up, we can play zone, we can run some traps. All five guys can do it. We're excited about the secondary."

Solley may have to share another top cornerback in Pum Savoy, who's competing for the starting quarterback position and took a lot of the snaps there on Wednesday.

"We leave that to Coach Curry," Solley said. "Coach Curry makes those decisions. We've got some stuff worked out in practice, we do a lot of sharing. We feel like we have our best 11 out there but also I've been working with these guys for a long time and we want what's best for everybody.

"So, if that means sharing or making a tough decision like giving up somebody like Pum Savoy to play quarterback we're all in line with that. If that's what is the best for the team, we're going to do that."

The Pulaski Academy Bruins began summer preparation for their first season in Class 6A with the team camp on Wednesday at Greenwood, which will be a fellow 6A-West foe in the new two-year classification cycle.

"We're just working hard in the weight room for sure, moving up a notch," Pulaski Academy coach Anthony Lucas said. "We're just going to prepare like we've been preparing. Our nonconference games through the years, we've played bigger kids and high-caliber teams to prepare us for conference. It's going to be an adjustment because it's going to be week in and week out. We'll continue to do what we've been doing, but maybe a little bit faster."

Pulaski Academy and Little Rock Christian were elevated to Class 6A after being deemed dominant according to the Competitor Equity Factor. The two Little Rock private schools were placed in the 6A-West to form a nine-team conference, which also means an earlier start to the conference schedule.

"It does change some things for us," Lucas said. "We're used to having a three-game nonconference schedule. Now, it limits us to two. We're excited about it. We'll adjust."

Pulaski Academy, like Greenwood, has won 10 state championships, which is the most in the modern era of the playoffs, which began in 1968.

A total of eight schools were represented at Greenwood's team camp; Rogers, Fayetteville, Pulaski Academy, Northside, Alma and Russellville in addition to the Bulldogs.

"We had really good football teams here, well coached with good football players," Greenwood coach Chris Young said. "It gives you an opportunity to see different things; different offenses and different defenses. The benefit of playing good teams is it shows you where you need to get better. We like to do that in the summer. It was a great camp."

Unlike the 7-on-7 passing tournaments, players don pads and live scrimmage in team camps.

"There are benefits of 7 on 7," Young said. "We're not a big 7-on-7 team but we like to go out there and let our quarterbacks throw and our kids to compete. This is real football. Obviously, we're big on tempo and we want to stay up and we not tackle kids to the ground. It is more like a traditional Friday night."

"The biggest thing is that every team left healthy," Young said. "We had a sprained ankle and a sprained wrist. That was the No. 1 thing was making sure everybody was coached up with the proper tempo."

Wednesday's team camp was one of eight days of competitive activities for each team participating allowed during the summer, according to Article IV, Section 1, Rule F of the Arkansas Activities Association Handbook.