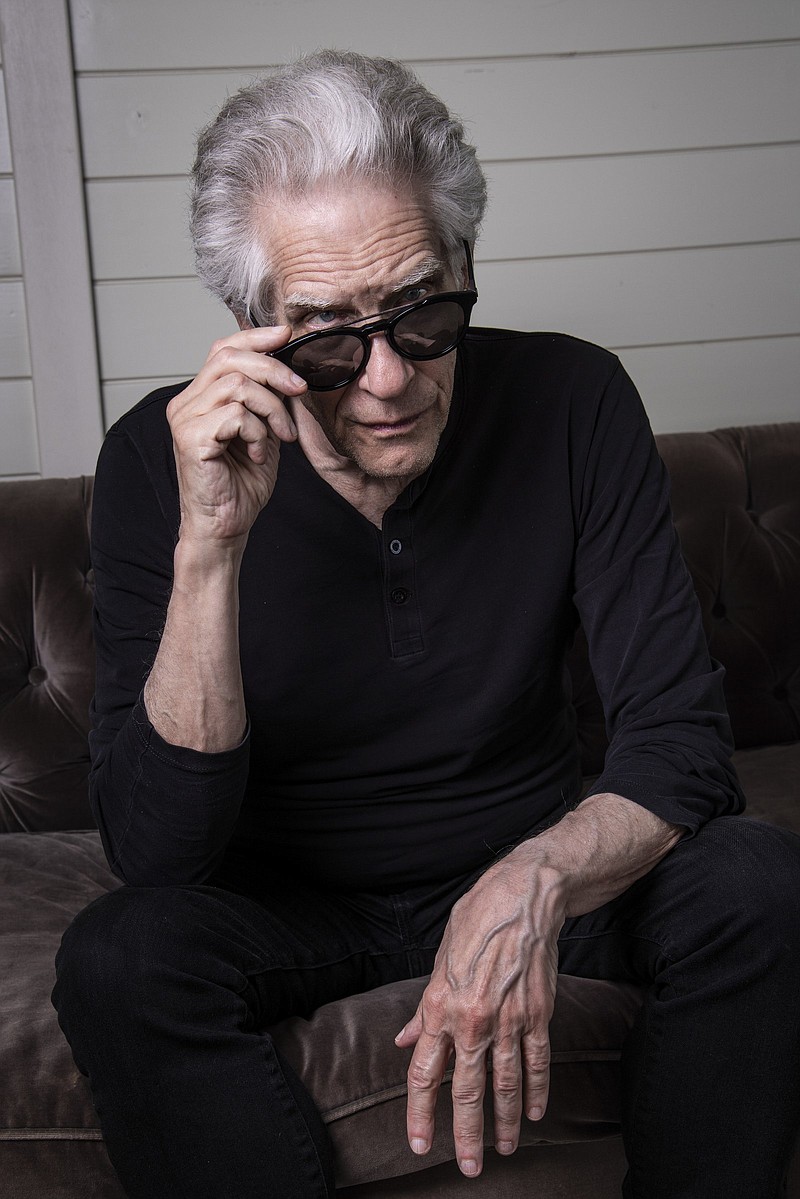 In the eight years since his last film, 2014’s “Maps to the Stars,” 79-yearold director David Cronenberg tried (and failed) to make a long form episodic series for a streaming service and had cataract surgery that literally changed the way he sees things. Now he returns to his familiar themes of body horror and philosophy with “Crimes of the Future.”

CANNES, France — David Cronenberg is sitting on a balcony when a squawking seagull flies overhead.

The 79-year-old Canadian auteur has long been fascinated by what’s in our bodies and what we put in them. His latest film, “Crimes of the Future,” which opens in theaters today, stems partly from his interest in the ubiquity of microplastics.

Cronenberg, who sat for a recent interview at the Cannes Film Festival where “Crimes of the Future” was premiering, first wrote the film’s script in 1998. Sensing it had grown only more relevant, Cronenberg unearthed it for his first film in eight years, and, he says, didn’t change a word.

It revolves around the performance artist couple of Saul Tenser (Viggo Mortensen) and Caprice (Lea Seydoux). In a near-future where plastics have changed human biology, they artfully remove tumorous organs from Tenser in surgical performances. It co-stars Kristen Stewart as a bureaucrat turned super-fan after witnessing a performance.

Art as an organ cut out and displayed is a fitting metaphor for Cronenberg, whose early films (“Videodrome,” “The Fly”) made him a master of body horror. The director is simultaneously auctioning an NFT of his recently passed kidney stones. Mortensen, who starred in Cronenberg’s “A History of Violence,” “Eastern Promises” and “A Dangerous Method,” calls “Crimes of the Future” Cronenberg’s most autobiographical film.

“Each time when I watch one of his movies,” Mortensen says, “I see more.” For Cronenberg, the layers of “Crimes of the Future” were a way to probe both the nature of being an artist and the way our increasingly unnatural environment is transforming our bodies — not to mention seagulls. It’s an evolution that doesn’t frighten but excites Cronenberg. He marvels at how scientists are already working on whether plastics might be made edible — and maybe even taste good.

AP: As you’ve aged, has your relationship to your body changed?

CRONENBERG: Oh, of course. Usually dismay, but it’s not so bad. It’s very interesting. It’s a part of life that you’ve anticipated and read about and blah, blah, now you’re experiencing. It hasn’t been as bad of one as it could be, let’s put it that way. I’m 79. I don’t feel that age at all.

AP: Do you take care of yourself?

CRONENBERG: I’ve been lifting weights since I was 16. Not to be a bodybuilder, but just to stay in shape. I don’t smoke. I don’t drink. Not out of any political or sociological agenda. I just have never been attracted to those things. Maybe that helps.

AP: So you think about what you put in your body?

AP: Much of your work is about the connection or disconnection between one’s body and the world around it. In the years you’ve been making films, technology has increasingly entered our bodies, even if it’s not a videocassette in our torso.

CRONENBERG: Well, I just had cataract surgery. Now, that’s amazing. Basically, they’re destroying the lenses in your eyes, sucking them out and then putting in plastic lenses that unfold and become your eyes. I’ve been looking through my lenses for my whole career as a moviemaker. And now the reason I’m wearing sunglasses is because I get more light in my eyes because of the cataracts being gone. Everything’s brighter. The colors are different, quite different. I joked with my director of photography that we’ll have to recolor the whole movie now that I have different lenses in my eyes. That’s pretty intimate. Technology in your eyeballs. I’ve got hearing aids. I’m totally bionic. Years ago this would all be problematic. My career would have ended a lot sooner because if you can’t hear and you can’t see, it’s hard to make movies, you know?

AP: Do you imagine that what we can do to our bodies, and what will be judged acceptable, will only increase in time?

CRONENBERG: Absolutely. We’re now realizing that just drinking water from a plastic bottle is depositing microplastics into our bloodstream. Even before that, it was posited that maybe 80% of the human population has microplastics in their flesh. So our bodies are different than human bodies have ever been before in history. This is not going away.

AP: Do you foresee battles over things like computers implanted in our brains?

CRONENBERG: There’s a Nobel Prize winner named Gerald Edelman who said the brain is not at all like a computer. It’s much more like a rainforest because there’s a struggle for dominance in your brain with your neurons that’s constantly changing. The thing that people are afraid of with mRNA because it’s a new thing and they say Bill Gates is inserting microchips in our body, it’s fantastic! It’s such a breakthrough. CRISPR is fantastic. Now, can it be used for evil? Well, yeah, like the atomic bomb. But beautiful things absolutely are possible from that.

AP: In presenting “Crimes of the Future,” do you feel like you’re putting an organ out for display?

CRONENBERG : (Laughs) I’m presenting my kidney stones to the audience. I’m saying “This came from inside my body.” How more intimate could it possibly be? Yeah, I mean, that’s the metaphor. That’s the surgical organ metaphor in the movie, an artist putting out their inner-most intimate thoughts and feelings and visions and whatever else. Definitely you are vulnerable. You are incredibly vulnerable.

AP: This is your first film in eight years. How do you feel about how the movie landscape has changed?

CRONENBERG: O n e of the things that brought me back to moviemaking was Netflix and the idea of streaming and a streaming series. I tried to make one. I thought, well, this is not really movie making, but it’s still cinema. It’s a different kind of cinema, seriously different. I thought, well, this is a whole different ballgame, and yet it’s still cinema. I mean, my idea of cinema. I think theaters are dead. I think they’ll be a niche thing for superhero movies. I haven’t gone to the cinema for decades. You know, I just prefer to watch it at home. And the TV sets have gotten so good, the sound systems have gotten so good that I defy those who say that you can’t have a true cinematic experience at home. I completely don’t agree.

AP: “Crimes of the Future” hinges in part on how far Saul Tenser is willing to go for his art. Are you thinking much about death?

CRONENBERG: I’ve always thought about death. I don’t think you can be a human being without thinking about death. Ever since I was a kid and I had a pet die, you think, what just happened? Where’s that cat? You realize that not only are you going to die, but your parents are going to die. I can still remember the moment when I had that discussion with my parents. So it’s always a question. At my age, I wouldn’t say it’s more of a question, except that you have many friends who are now dying, who are exactly your age. Every time I look in the newspapers there’s a guy that I knew — William Hurt, for example, or Ivan Reitman — and they’re younger than I am. There’s not much you can do with it other than to acknowledge that, yes, you will die. Beyond that, what can you say? I always thought in novels where it would say for a living author “Born 1943—.” It’s like the dash is waiting for you. It’s waiting for you so that it could be filled in. And I’m saying, “(Expletive) you, I’m not going to die. I’m not going to tell you when I’m going to die.”