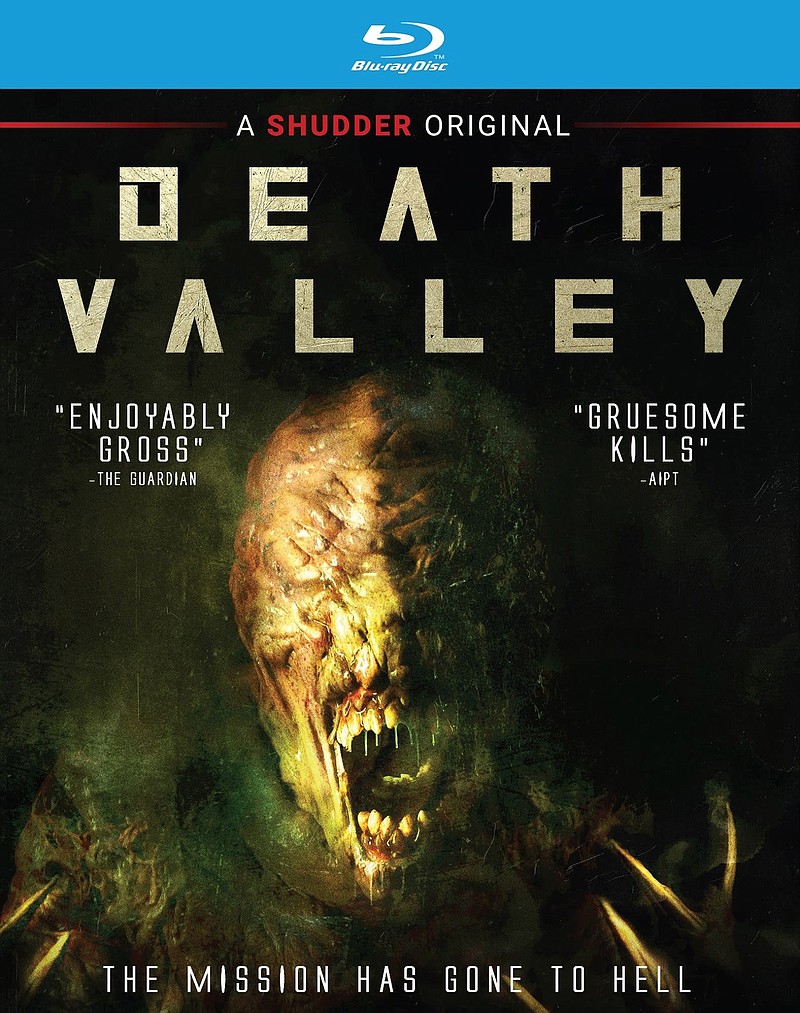 "Death Valley" (not rated, 1 hour, 31 minutes, DVD, Blu-ray, On Demand) A serviceable if not spectacular monster movie in which two hired mercenaries who are commissioned to rescue an imprisoned scientist from a secret facility are hunted down by a terrifying creature of unknown origin. With Jeremy Ninaber, Ethan Mitchell, Kristen Kaster; written and directed by Matthew Ninaber.

"Double Threat" (not rated, 1 hour, 32 minutes, On Demand) Action thriller in which a well-trained fighter skims money from a gangster organization then goes on the lam, accompanied by an accountant who is in way over his head. With Danielle C. Ryan, Matthew Lawrence, Kevin Joy; directed by Shane Stanley.

"Wolf Hound" (R, 2 hours, 10 minutes, On Demand) This historical drama, based on actual events, concerns a recon mission during World War II over Nazi-occupied France by pilot David Holden (James Maslow); when shot down along with his B-17 bomber, he learns the Germans are loading his U.S.-marked aircraft with a city-destroying super-bomb that could help the Axis win the war. With Trevor Donovan; directed by Michael B. Chait.

"The Race to Alaska" (not rated, 1 hour, 39 minutes, On Demand) This scrappy documentary follows an epic sailboat endurance race from Port Townsend, Wash., to Ketchikan, Alaska -- 750 miles across icy waters with no support -- known for attracting unusual and unique personalities competing for the top prize of $10,000 (second prize is a set of steak knives), directed by Zach Carver.

"Sonic the Hedgehog 2" (PG, 2 hours, 2 minutes, On Demand) This decent-enough comedy sequel, based on the video game franchise, concerns Sonic (Ben Schwartz) who, eager to prove he has what it takes to be a true hero, gets a chance when Dr. Robotnik (Jim Carrey) returns with new partner Knuckles (Idris Elba) in search of an emerald that has the power to destroy civilizations. With James Marsden, Ben Schwartz, Tika Sumpter, Natasha Rothwell, Adam Pally, Shemar Moore, Colleen O'Shaughnessey, Lee Majdoub with Idris Elba and Jim Carrey; directed by Jeff Fowler.

"The Time Capsule" (not rated, 1 hour, 45 minutes, On Demand) A fresh approach to the time-honored youthful-romance tale is offered here when a jaded politician (Todd Grinnell), fresh off an electoral loss, escapes with his wife (KaDee Strickland) to a lake house where he spent summers as a teen; that's where their lives are disrupted by the appearance of his first love (Brianna Hildebrand), who returns from a 20-year space voyage and hasn't aged a day. Co-written and directed by Erwann Marshall.