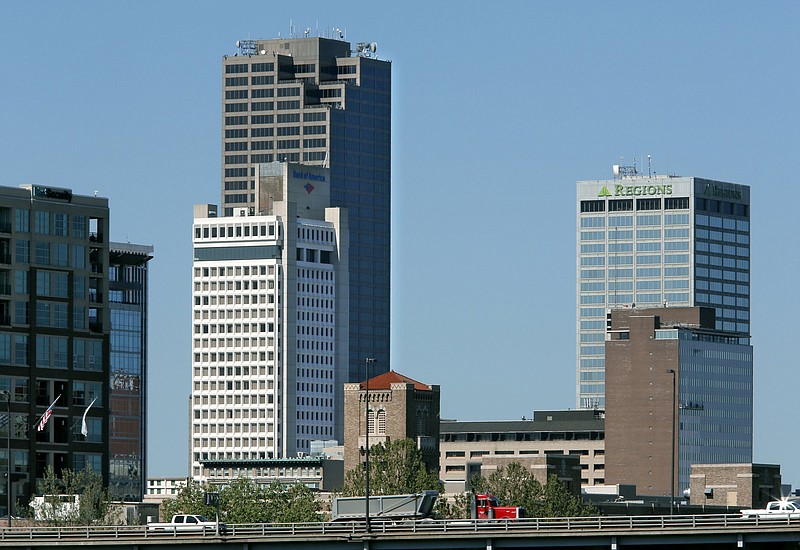 The Regions Center tower (right) as seen from the Clinton Presidential Park Bridge in this file photo. (Arkansas Democrat-Gazette)

Officials with Taconic Capital Advisors said Thursday they intend to invest in upgrades to the 30-story skyscraper at the corner of West Capitol Avenue and Broadway Street.

The acquisition is "a vote of confidence in the future of the (downtown) sub-market and the building itself," Taconic said in a news release. The sale price was not disclosed.

The purchase could help revitalize the downtown real estate market, which has stagnated in recent years as West Little Rock and suburban markets have lured tenants from the central Little Rock area. Companies shifting to more reliance on a remote workforce also has taken workers out of hubs like downtown Little Rock and put more pressure on building owners.

"Anything that creates stability in the ownership of those building is good for the downtown market," said Kelley, chief executive officer of Kelley Commercial Partners. "It presents more confidence that tenants can rent and not be worried about the condition of the buildings."

In a report issued last month, property management firm Colliers of Arkansas also hinted at a new energy developing for downtown revitalization. Little Rock's core could benefit from "planned mixed-use re-developments as well as downtown beautification projects (that) could help promote walkability, community, and ultimately, more destination areas," the report said. "Building improvements are still expensive, but there is growing momentum to revitalize the area."

Taconic said it will use CBRE Group of Dallas to market the property to professional service firms, corporate users and government and government-related tenants. CBRE will handle leasing and management of the facility.

"We really like the proven stability of the sub-market and the very limited supply that's been added here for the past 30 years, which in our minds provides an extremely rare opportunity to own what can easily be the best building in the market with the right attention and strategic investment into the building," said Alex Fleming, director of asset management at Taconic. "Our goal is to do just that -- be the premium space offering with the most attentive level of customer service to our tenants. We're ready to hit the ground running to realize that potential as soon as possible."

Regions Bank will continue to occupy the building, Taconic officials said, with a spokesman adding that no decision has been made on whether to rename the building.

Most importantly, Fleming said the new ownership will focus on existing tenants.

"Our first priority is making sure that our in-place tenants are happy and appreciated, so we're looking forward to hearing how we can work with them to make this a place that they're proud to call home for many years to come," he said. "They, as well as many local brokers and vendors, have been very patient during the trailing years of inactivity and challenged ownership, and we intend to make up for lost time so that their patience is rewarded."

Regions Center has been tied up in bankruptcy proceedings since 2016 and was put up for sale by the trustee for the case last October. The building, which opened in 1975, is valued by the Pulaski County assessor at $30 million.

Taconic Capital Advisors has about $8 billion in assets under management and operates out of offices in New York, London and Hong Kong. The company says it is "rooted in distressed and opportunistic investing" and its real estate division invests in all asset classes in public and private markets.