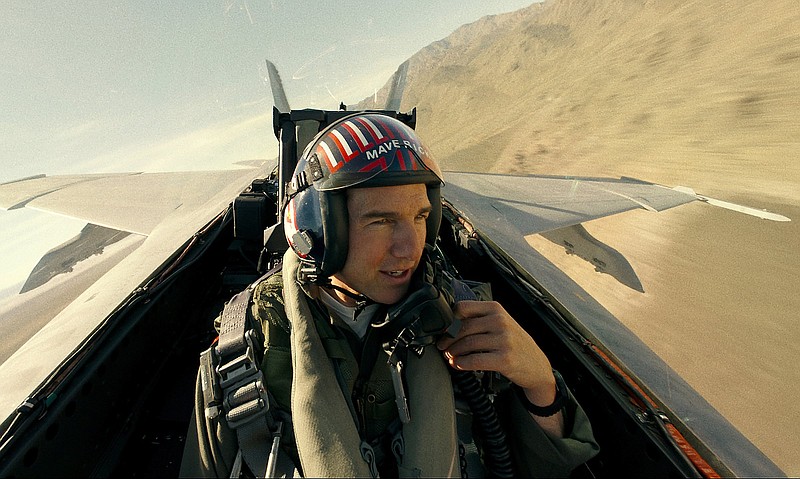 In the constant war of attrition that is pop culture, Tom Cruise has become what feels like the last movie star standing -- the dude found on a life raft, surrounded by the emaciated corpses of his fellow sailors who succumbed to the exposure and the thirst, with a scraggly beard and lips so sunburned they're nearly swollen shut, but still able to grin toothily at his rescuers.

To survive such an ordeal, in this case the glaring eye of public scrutiny for very nearly four decades (prepare to feel morosely old: "Risky Business," Cruise's break-out hit that put his name on the map, came out in 1983!), one must be as steely as a girder and twice as determined as everyone else. A recent feature on Cruise in Bella, celebrating his umpteenth return to the big screen, quoted him as saying he never takes a day off. For him (and trust me, him alone) the press tours, with their grinding repetition and highly regimented daily schedule, are what he considers his "vacation days" -- that is, days that he's not actually on set, or in the office, working on putting another film together.

We can agree that Cruise is a peculiar man in many ways -- never more evident than the disastrous press tour he managed himself back in 2005, where he mansplained to Matt Lauer about mental health (irony unbridled), and jumped around on Oprah's couch like an otherworldly creature trying to emulate human emotion after mainlining a few seasons of "The Price Is Right."

In interviews, he tends to come across uncannily like many of his characters: Overtly controlled, somewhat menacing, and disarmingly on point in a way that feels as if he's dispatching his lines from a script he's coldly writing as he goes along. He speaks in declarative sentences. He doesn't hem and haw. And many of these peculiar utterances are punctuated with his trademark pressing smile.

Yes, those blaring, science-crafted chompers of his, long a staple of his characters' psyche, reveal time and again a man whose self-doubt has been beaten into submission and locked deep in a dungeon with no window. His smile is rarely mirthful, but, rather, the luxurious leer of a man with seemingly no weakness to betray. The summary Cruise character is cocksure to the point of mendacity: He wields that smug grin like a gunfighter releasing the hitch on his holster. It holds everyone at distance, carves out space for himself in a crowded room, a force-field of self-assuredness that nothing can penetrate. (For Cruise watchers, perhaps the consummate on-screen moment for this particular smirk comes in Martin Scorsese's "The Color of Money," when Cruise's brash young pool prodigy has a revenge match against an equally petulant veteran pool shark -- played by real-life pro Keith McCready -- both of them baring their prodigious teeth at one another like dueling barracudas.)

There's no wonder, then, so many of his most enduring roles -- in "Top Gun, " "Days of Thunder," and the many installments of the "Mission: Impossible" series -- involve so completely the indulgence of his irrepressible id: He's the best fighter pilot, the best bartender, the best secret agent, the most humane sports agent, and the last Samurai. Of course it would therefore stand to reason he'd be the most enduring movie star of the last half-century: If you listen to him, he's the best at nearly everything he does.

It's not that Cruise, now with some 45 features under his belt, has never challenged his brand. Memorably, in films such as "Born on the Fourth of July" (which earned him his first of three Oscar nominations), "Magnolia" (his second nomination), and "Edge of Tomorrow," he takes that same irritating self-assurance and turns it on its head, but even then, he is always the central focus of everything in the film. I remember first seeing "Jerry Maguire" on the big screen back in 1996 and by the end, after endless close ups of Cruise's face articulating emotions, feeling (somewhat claustrophobically) as if I'd spent the entire evening camped under his nostrils.

All of these things are at least subjectively true, but, by this point, with his "Top Gun" sequel hitting screens this past Memorial Day weekend -- and obliterating the box office in its wake -- it feels as if Hollywood has never needed him more, a platitude that can be extended out to include the multiplex multitudes themselves, buying their tickets and anticipating a return to the whole idea of Big Cinema, in the Age of Post-Pandemic Entertainment.

From its inception, Hollywood has always been known as a "dream factory," in the sense that it was able to replicate a kind of heightened reality that the rest of us could readily recognize and empathize with, if not actually exist in. Not to get too Nicole Kidman for AMC here, but Hollywood films, while bigger than life, were always, somehow still of it, apace. There were shocks, thrills, laughs and lovebirds, but they spoke to us in ways we could connect to -- and with -- creating an indelible portrait of the human experience writ large.

I've long been more forgiving of the MCU (a childhood of reading Marvel comics, coupled with a daughter absolutely besotted by the movies, no small factors), even as many of my colleagues have become completely worn out by the Disney machine, churning out endless reams of highly hyped intellectual property content like one of those Hula Hoop factories in "The Hudsucker Proxy." I can't blame these weary critics, even if I don't quite share their ire.

But the Marvel films, as sweeping and encompassing as they can be, are mostly a collection of A-list actors standing in front of large green-screens on an otherwise empty set, often covered in ping pong balls, holding their mystical hammers, ray blasters, and adamantium shields as wooden dummies for the CGI artists to turn into exciting agit-props.

It's the new school. You shoot on-set, your costumes are CGI, your backgrounds are CGI, the stunts are CGI, often your entire character is CGI, all in an attempt to best emulate the comic book artform crafted by pen-and-pencil geniuses like Jack Kirby, Steve Ditko, Bob Kane, Jim Steranko, Arthur Adams, John Byrne, and George Perez (R.I.P), to give comic readers an animated replica of what they saw in the page panels.

Tom Cruise has never appeared in an MCU film. He's never been a superhero, as such, though many of his characters are, in fact, heroic beyond normal measure. There is, I suspect, a reason for that: Since '96, Cruise has added to his insane (apparently unceasing) work schedule by producing many of his films himself. I can hold him to task for some of these films as an actor (can't say I cared a whit about "War of the Worlds," "Rock of Ages," or "Knight and Day," as forgettable a film as Cruise has ever made), but as a producer, for the "Mission: Impossible" installments, easily one of the best series of action films ever made, and here, with "Top Gun: Maverick," there is a great deal to appreciate about his refusal to bow before the digital god.

Cruise has held fast to the idea that something performed will always be more exciting than something manufactured; that real bodies, performing death-defying stunts (many of which he does on his own), will engage the viewer in ways deeper and far more satisfyingly than yet another superhero battleground that ends up, essentially, a CGI cartoon (I'm looking at you, "Aquaman").

Christopher Nolan, with his version of the "Bat"-franchise also understood this basic action principle. It made those films far more visceral and affecting, even given their laborious length, than the "Justice League"-style of CGI-overkill (long a staple of director Zack Snyder). Last summer's MCU installment, "Shang-Chi and the Legend of the Ten Rings," helmed by Destin Daniel Cretton, had a dynamite first act of martial arts ingenuity, but eventually devolved into a CGI slog of flying dragons and energy fields shooting out in all directions, which felt especially disappointing after it whet our appetite for the much more enthralling thrills of watching a dude having to fight off numerous attackers within the pressing confines of an articulated city bus.

If "Top Gun: Maverick" is a throwback sort of affair (this is a false conditional, the film revels in its '80s roots so blatantly that David Bowie's "Let's Dance" is playing in the background of a modern San Diego bar, and Cruise's signature Aviators are polished to a metallic gleam), extolling many of the virtues of the first film, in its unbridled cheerleading for the U.S. military in general, and the Navy very much in particular -- even as it has diversified its cast to include women and people of color as the "best of the best" -- we can at least appreciate that Cruise (the man, the icon, the alien construct of unknown origin) also holds fast onto those elements of the pre-digital age that can still raise the hairs on the back of your neck.

Cruise's character in "Maverick," Pete Mitchell, is an older man in this film, referred to more than once as an anachronism, about to be phased out by unmanned drones, which, as his fed-up commanding officer (Jon Hamm, in full exasperation mode) explains, never get tired, don't miss assignments and certainly don't undermine their commanders (well, at least until SkyNet takes over).

Cruise, as Mitchell, mulls this would-be evisceration over a beat. You're expecting him to make an impassioned counter argument to his aggrieved boss, explaining how flying a war plane is all about feel, and intuition, and achieving the impossible, but in the end, it seems he can't really refute his commanding officer's point. Instead, he speaks soberly, as a man who has already considered his particular place and time receding into the mists of history, and, here, might as well be speaking for an entire older generation of movie-goers, eager to go back to the days when a big action film would leave you both thoroughly drained, and somehow, also twitching with adrenaline.

Maybe so, he finally agrees.