Ukrainians hold on as they await West’s aid 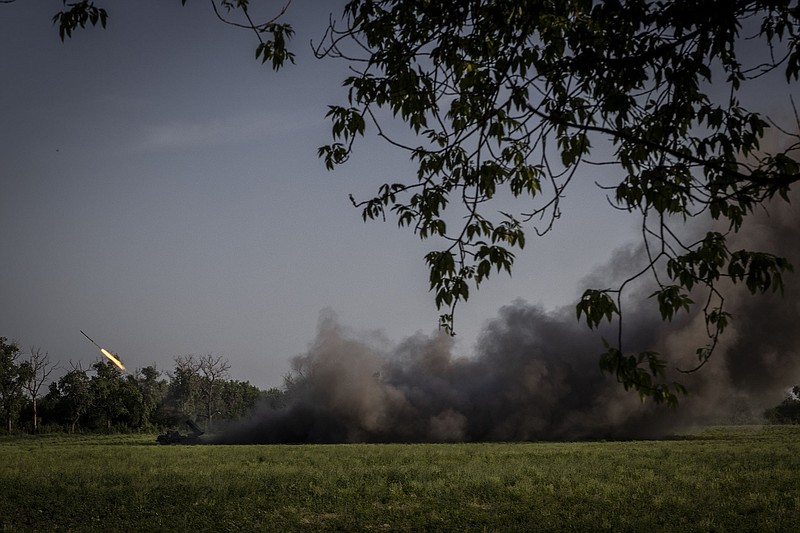 Ukrainian forces fire a salvo of rockets from a Grad launcher Thursday near Sievierodonetsk in Ukraine’s eastern Donbas region. Russian forces continued to pound towns in the area as they worked to tighten their hold on Sievierodonetsk. More photos at arkansasonline.com/ukrainemonth4/. (The New York Times/Ivor Prickett)

KYIV, Ukraine -- Ukrainian forces locked in a grinding battle for control of the country's east struggled to hold off Russian troops and buy themselves some time Thursday while they await the arrival of the advanced rockets and anti-aircraft weapons promised by the West.

With the arms deliveries possibly weeks away, Ukraine is looking at a prolonged period of grueling combat, military analysts said.

"There's a time lag, so the next few weeks are going to be pretty tough for our Ukrainian friends," said retired U.S. Lt. Gen. Ben Hodges, former commanding general of U.S. Army forces in Europe.

"And this can go on for quite some time," he warned.

Britain on Thursday pledged to send sophisticated medium-range rocket systems to Ukraine, joining the U.S and Germany in equipping the country with some of the advanced weapons Kyiv had been begging for to shoot down aircraft and destroy artillery and supply lines.

Western arms have been critical to Ukraine's success in stymieing Russia's much larger and better-equipped military during the war, which was in its 99th day Thursday.

The Kremlin warned of "absolutely undesirable and rather unpleasant scenarios" if the latest Western-supplied weapons are fired into Russia.

"This pumping of Ukraine with weapons ... will bring more suffering to Ukraine, which is merely a tool in the hands of those countries that supply it with weapons," Kremlin spokesman Dmitry Peskov said.

Russian forces continued to pound towns and cities overnight and to tighten their grip on Sievierodonetsk in the eastern industrial Donbas region, which Moscow is intent on seizing. An estimated 800 people, including children, were holed up in bomb shelters at a chemical factory under attack in the city, the regional governor said.

In the neighboring city of Lysychansk, some 60 percent of the infrastructure and residential buildings have been destroyed by nonstop shelling, a local official said.

Britain's Defense Ministry reported that Russia had captured most of Sievierodonetsk, one of two cities in Luhansk province that had remained under Ukrainian control. The Donbas is made up of Luhansk and Donetsk provinces.

Speaking by video link to a security conference in Slovakia, Ukrainian President Volodymyr Zelenskyy called for even more weapons and sanctions against Russia to halt such horrors.

"As of today, the occupiers control almost 20 percent of our territory," he said.

Zelenskyy said Russia had fired 15 cruise missiles in the past day and used a total of 2,478 missiles since invading. He said "most of them targeted civil infrastructure."

British Defense Secretary Ben Wallace said Britain will send an unspecified number of M270 launchers, which can fire precision-guided rockets up to 50 miles. Ukrainian troops will be trained in Britain to use the equipment, he said.

On Wednesday, the U.S. said it would supply advanced rocket launchers to Ukraine, and Germany agreed to provide up-to-date anti-aircraft missiles and radar systems.

Analysts think Russia is hoping to overrun the Donbas before any weapons that might turn the tide arrive. It will take at least three weeks to get the precision U.S. weapons and trained troops onto the battlefield, the Pentagon said.

"Supplies of Western weapons are of great concern for the Kremlin, because even without sufficient weapons the Ukrainian army is daringly resisting the offensive," he said.

Zhdanov predicted Russian forces will be exhausted when the fierce fighting in and around Sievierodonetsk is over, giving Ukraine time to get the weapons and prepare a counteroffensive.

Kyiv also got a diplomatic boost with the formal installation Thursday of a new U.S. ambassador to Ukraine, Bridget Brink.

Brink said her top priority "is to help Ukraine prevail against Russian aggression."

"There is no place on the planet I would rather be," she said after presenting her credentials to Zelenskyy. "President Biden has said that we're going to be here, helping Ukraine, for as long as it takes. And that's what we'll do."

Brink is Washington's first ambassador in Kyiv since former President Donald Trump abruptly forced out Ambassador Marie Yovanovitch in 2019. She later became a key figure in the impeachment proceedings against Trump.

Also Thursday, the U.S. announced new sanctions on Russian oligarchs and elites, including some of the richest men in Europe and their families, as well as penalties targeting more Kremlin officials, businessmen linked to President Vladimir Putin and their yachts, aircraft and firms that manage them.

Also included in the announcement by the departments of Treasury, State and Commerce are sanctions on God Nisanov, one of the richest men in Europe, and Alexey Mordashov, one of Russia's wealthiest billionaires, along with his wife and two adult children.

Mordashov is the main shareholder and chairman of Severstal, Russia's largest steel and mining company. Acting under earlier sanctions, Italian police seized one of his yachts.

"Russia's elites, up to and including President Putin, rely on complex support networks to hide, move, and maintain their wealth and luxury assets," Brian Nelson, U.S. undersecretary of the Treasury for terrorism and financial intelligence, said in a statement.

"We will continue to enforce our sanctions and expose the corrupt systems by which President Putin and his elites enrich themselves," he said.

Imperial Yachts SARL, a Monaco-based yacht brokerage and yachts including the Russia-flagged Graceful and Cayman Islands-flagged Olympia, are identified as blocked property connected to Putin.

A representative from Imperial Yachts said in an emailed statement that "the accusations made against us by the U.S. Government and in the press are false. We will pursue all available legal remedies to resolve this matter promptly." The company added that "we are not involved in our clients' financial affairs."

Others included in the latest round of sanctions are Yury Slyusar, president of United Aircraft Corp.; Vitaly Savelyev, Russia's transport minister; Maxim Reshetnikov, the country's minister of economic development; Irek Envarovich Faizullin, the minister of construction, housing and utilities; and Dmitriy Yuryevich Grigorenkothe, deputy prime minister and chief of the government staff.

The Commerce Department added 71 more people and entities located in Russia and Belarus to its sanctions list, with the intent of restricting the Russian military's ability to obtain technologies needed to further its invasion.

The U.S. has worked closely with allied governments in Europe, Asia and elsewhere to impose thousands of sanctions on Russian elites, oligarchs and banks. Allied governments have done everything from barring individuals from trading in Russian gold in the U.S. to banning companies from providing accounting, legal and consulting services to anyone located in Russia.

Western allies have also begun considering whether to allow Russian oligarchs to buy their way out of sanctions and using the money to rebuild Ukraine, according to government officials familiar with the matter.

Nate Sibley, a research fellow at Hudson Institute's Kleptocracy Initiative, said the U.S. could do more to impose sanctions on wealthy Russians, including Vladimir Potanin, who is the richest documented person in Russia worth roughly $30 billion, and Roman Abramovich, who recently sold his stake in Chelsea, a Premier League football club in London.

The European Union Council has imposed sanctions on Abramovich, which he is fighting in court. Potanin has largely escaped sanctions.

"It begs the question, why is U.S. Treasury dragging its feet on this," Sibley said. 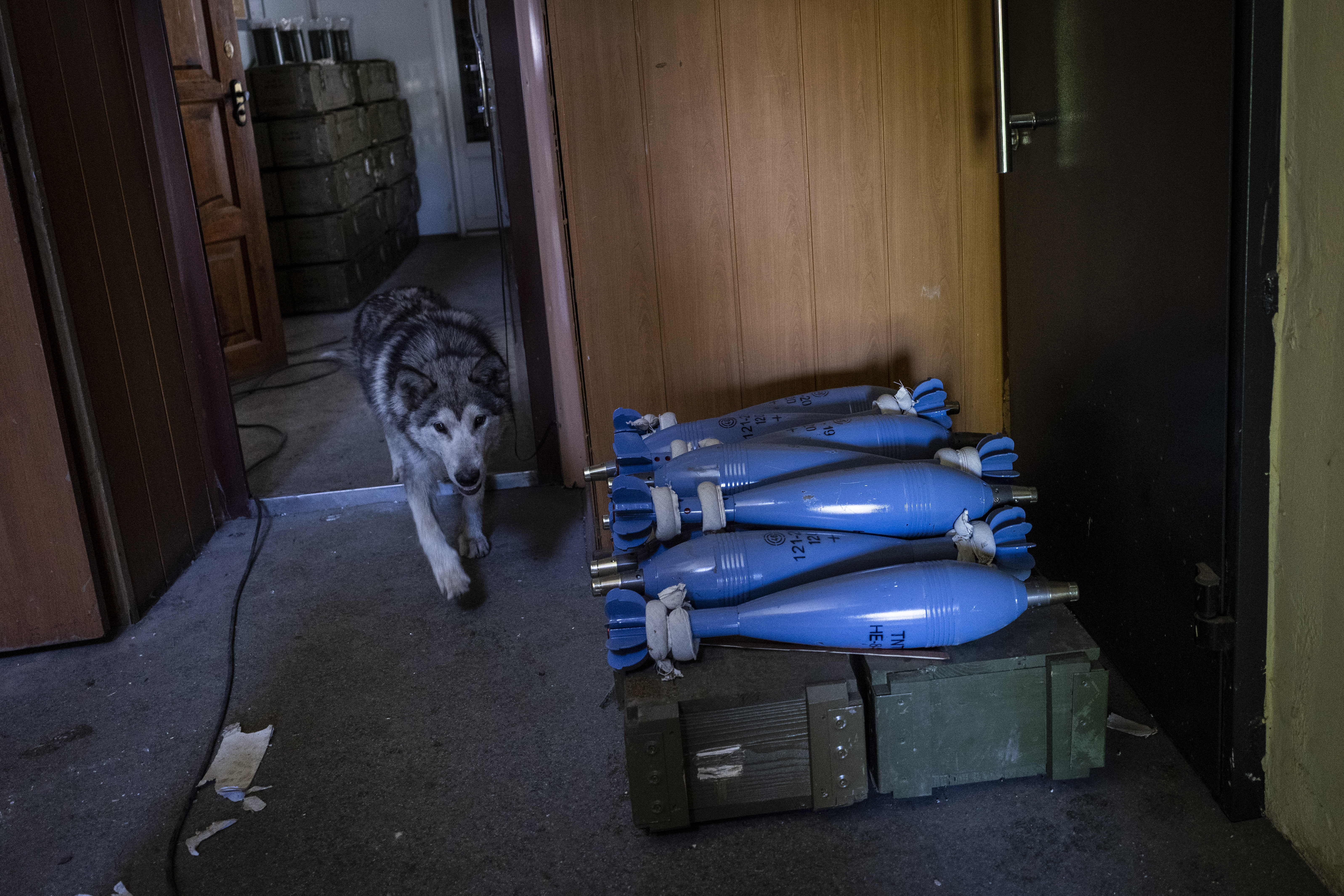 A dog walks past shells used by a Ukrainian artillery unit in a village near the frontline in the Donetsk oblast region, eastern Ukraine, Thursday, June 2, 2022. (AP Photo/Bernat Armangue) 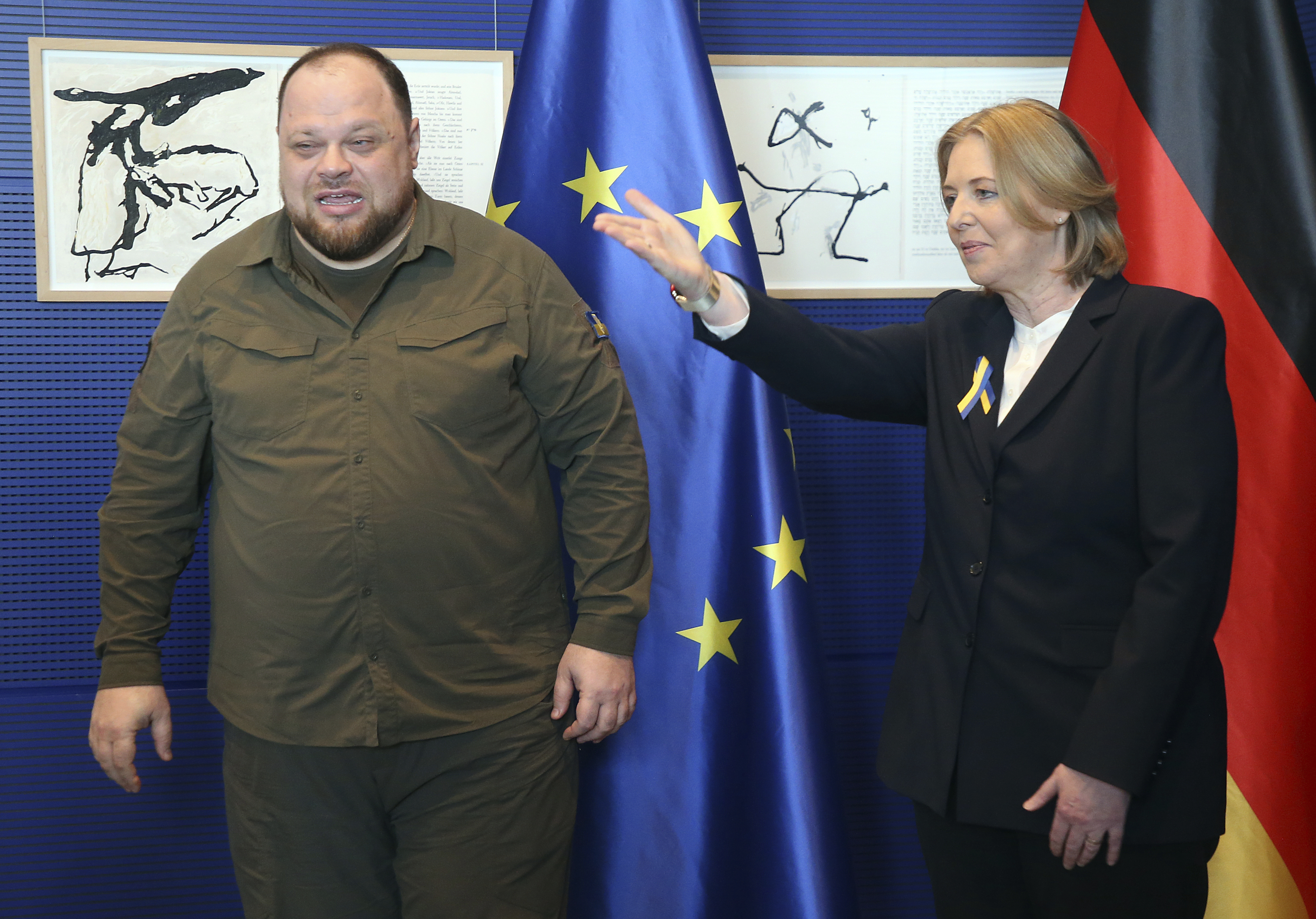 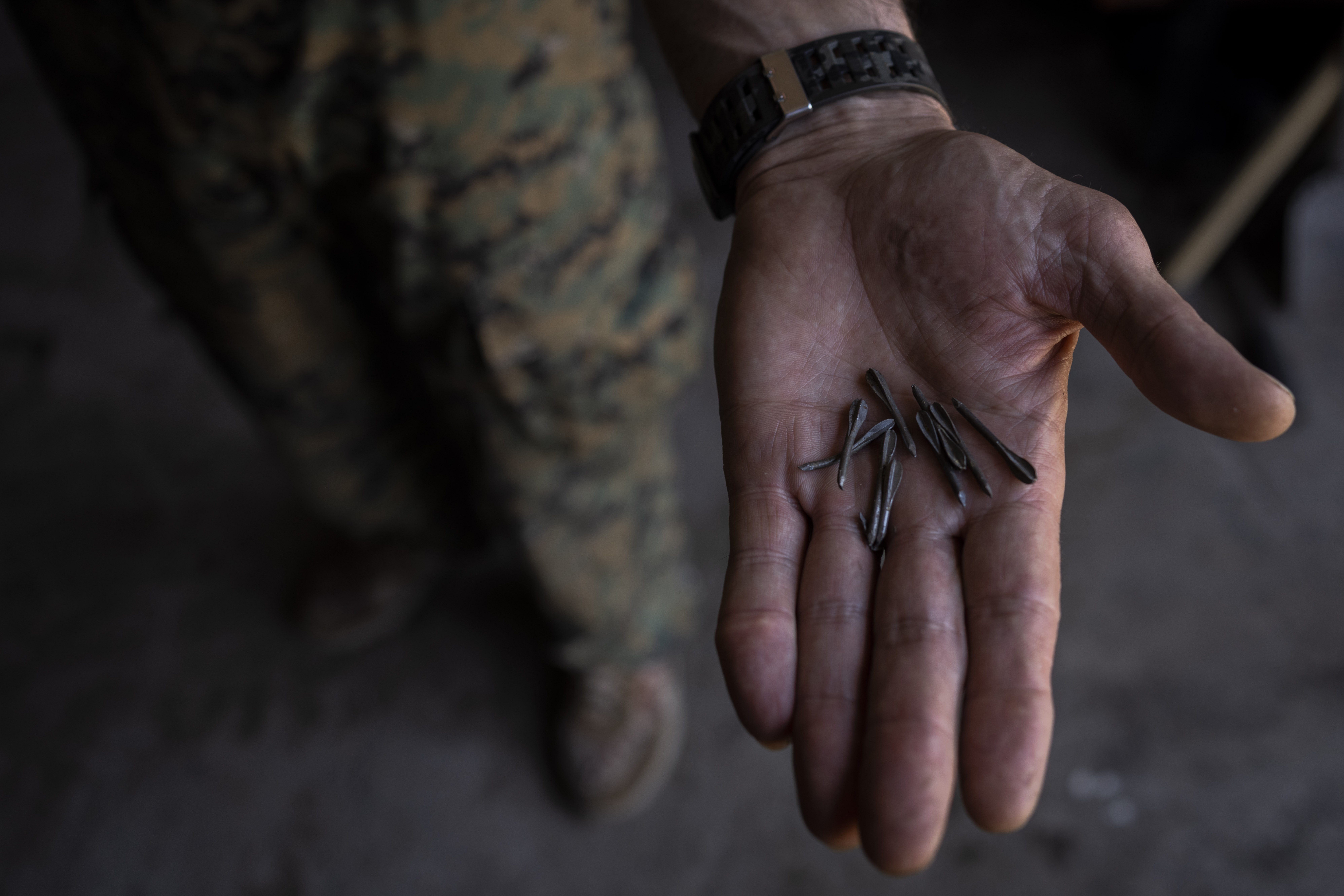 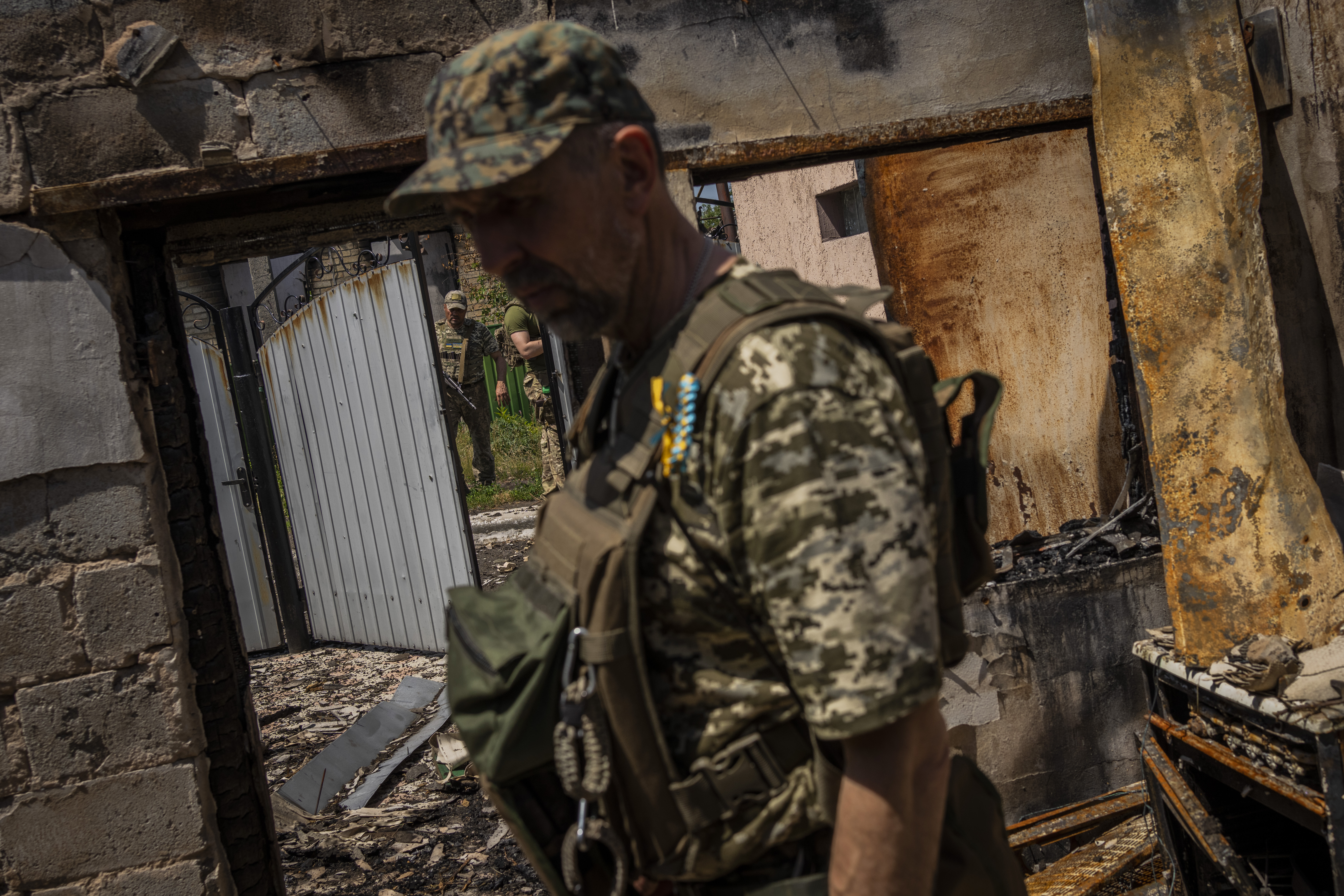 Commander of an artillery unit of the Ukrainian army, Mykhailo Strebizh, center, inside a destroyed house due to shelling in a village near the frontline in the Donetsk oblast region, eastern Ukraine, Thursday, June 2, 2022. (AP Photo/Bernat Armangue) 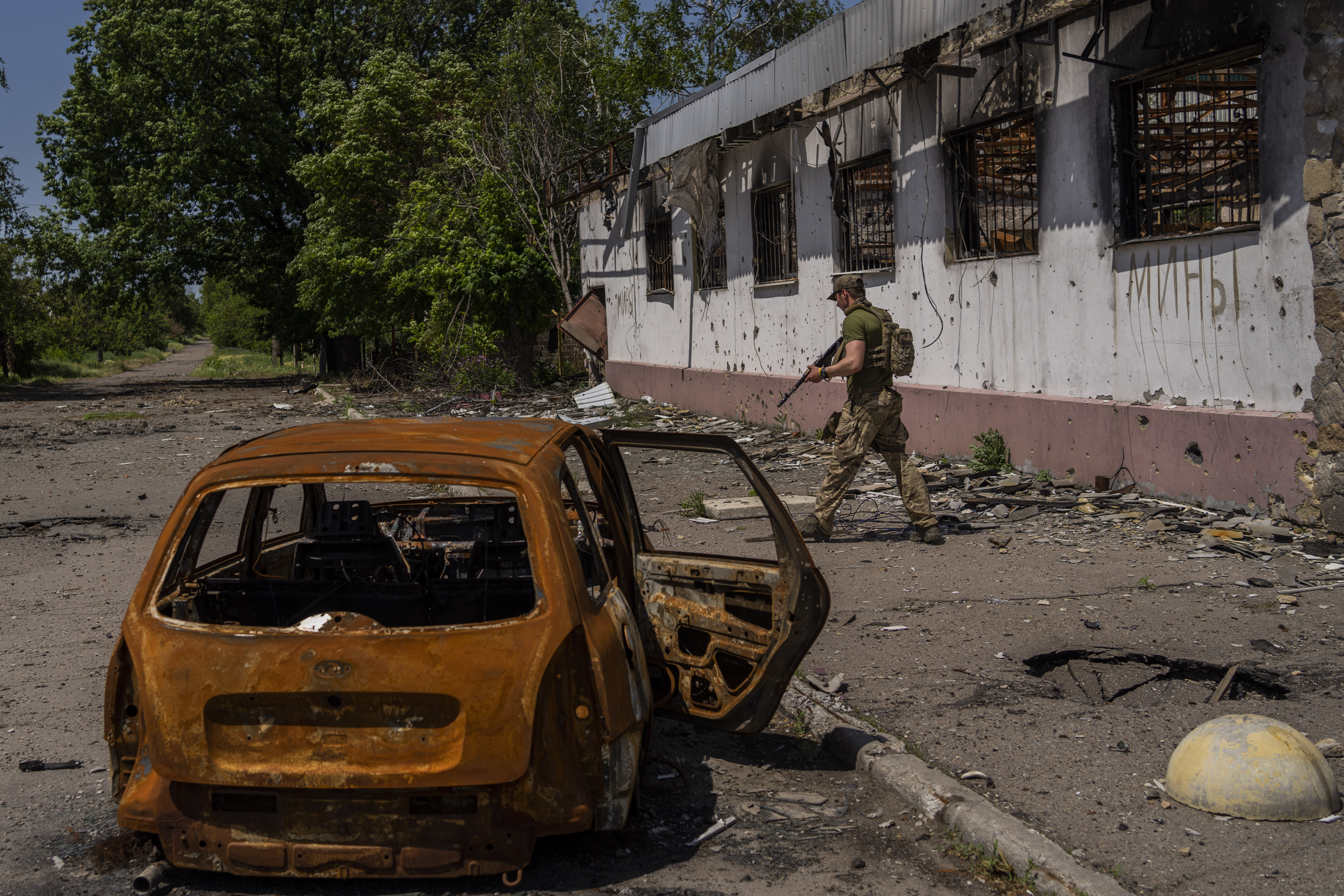 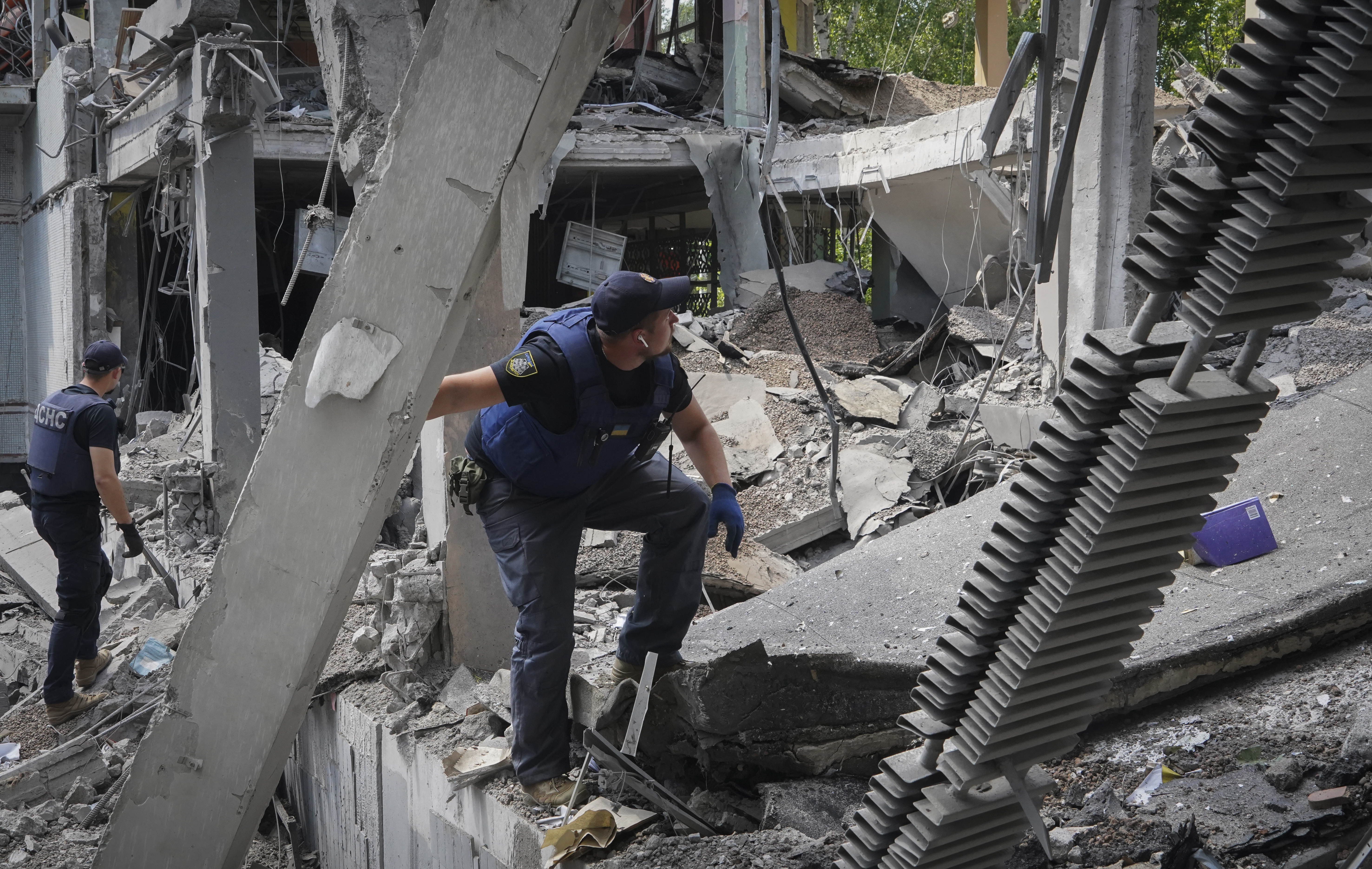 Ukrainian Emergency Situations Ministry employees search the site of a bombing in the school where a graduation ceremony, called the Last School Bell, was supposed to take place in Kharkiv, Ukraine, Thursday, June 2, 2022. (AP Photo/Andrii Marienko) 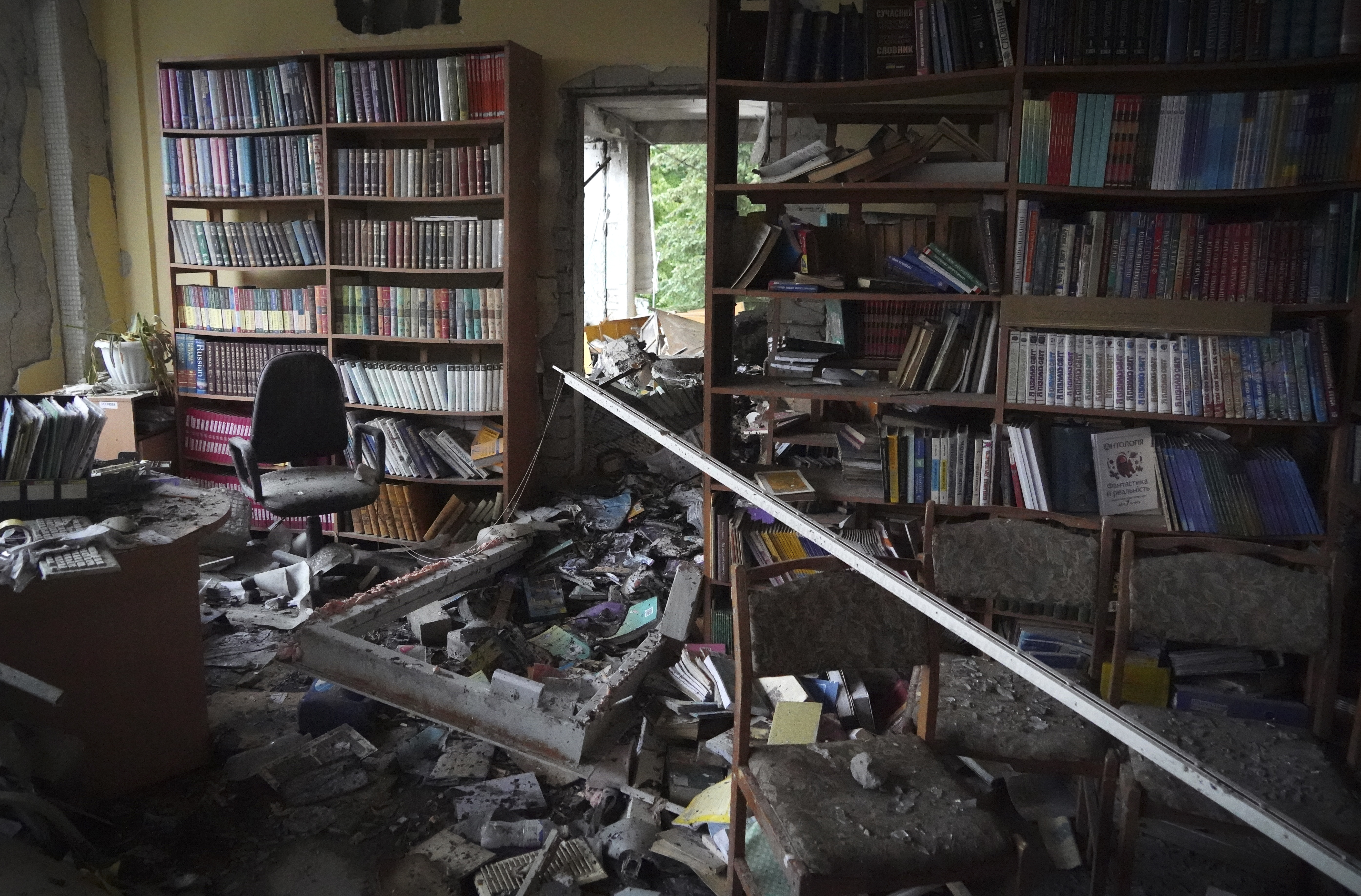 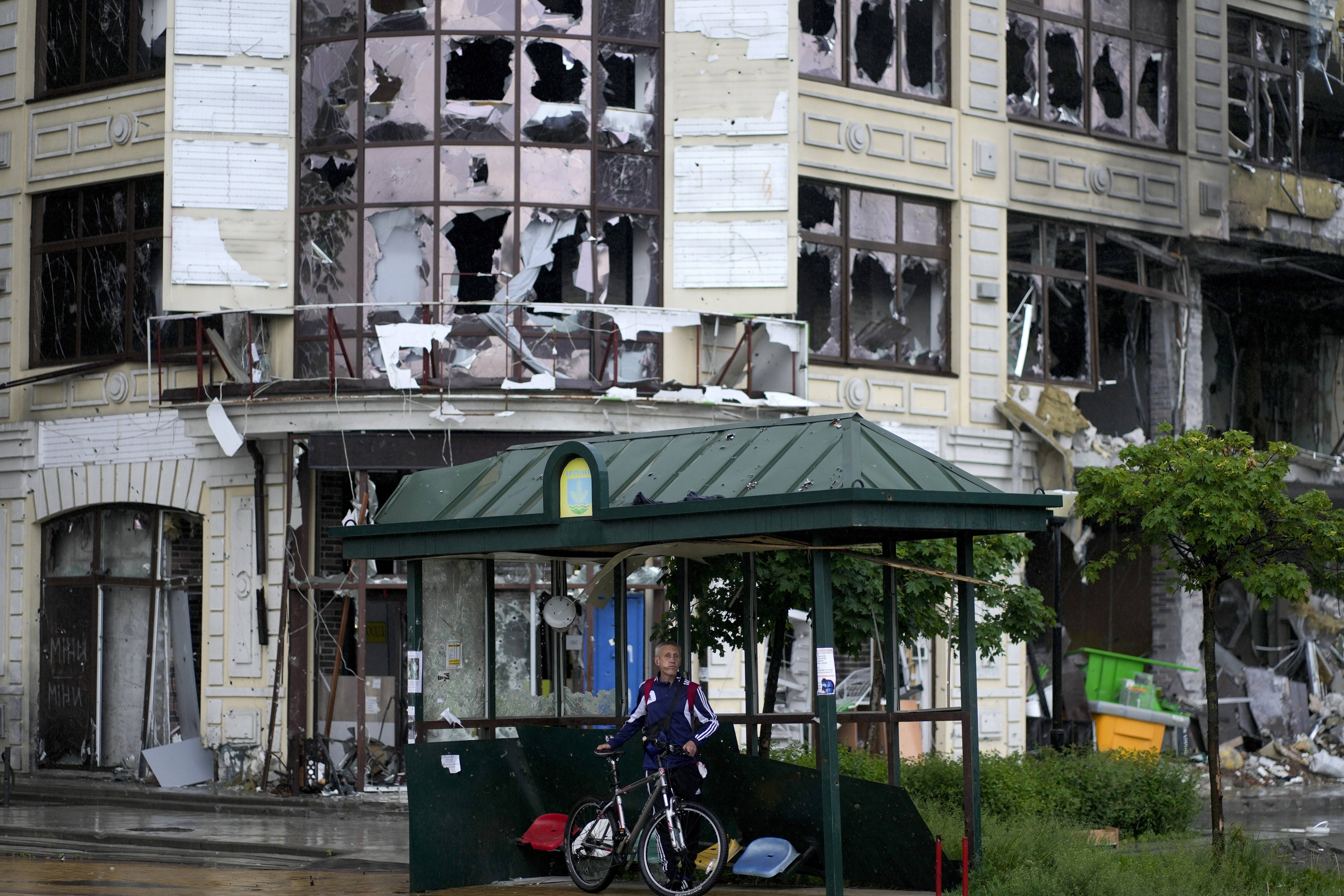 A man stands sheltering from the rain at a bus stop near destroyed building during attacks in Irpin, outskirts Kyiv, Ukraine, Thursday, June 2, 2022. (AP Photo/Natacha Pisarenko) 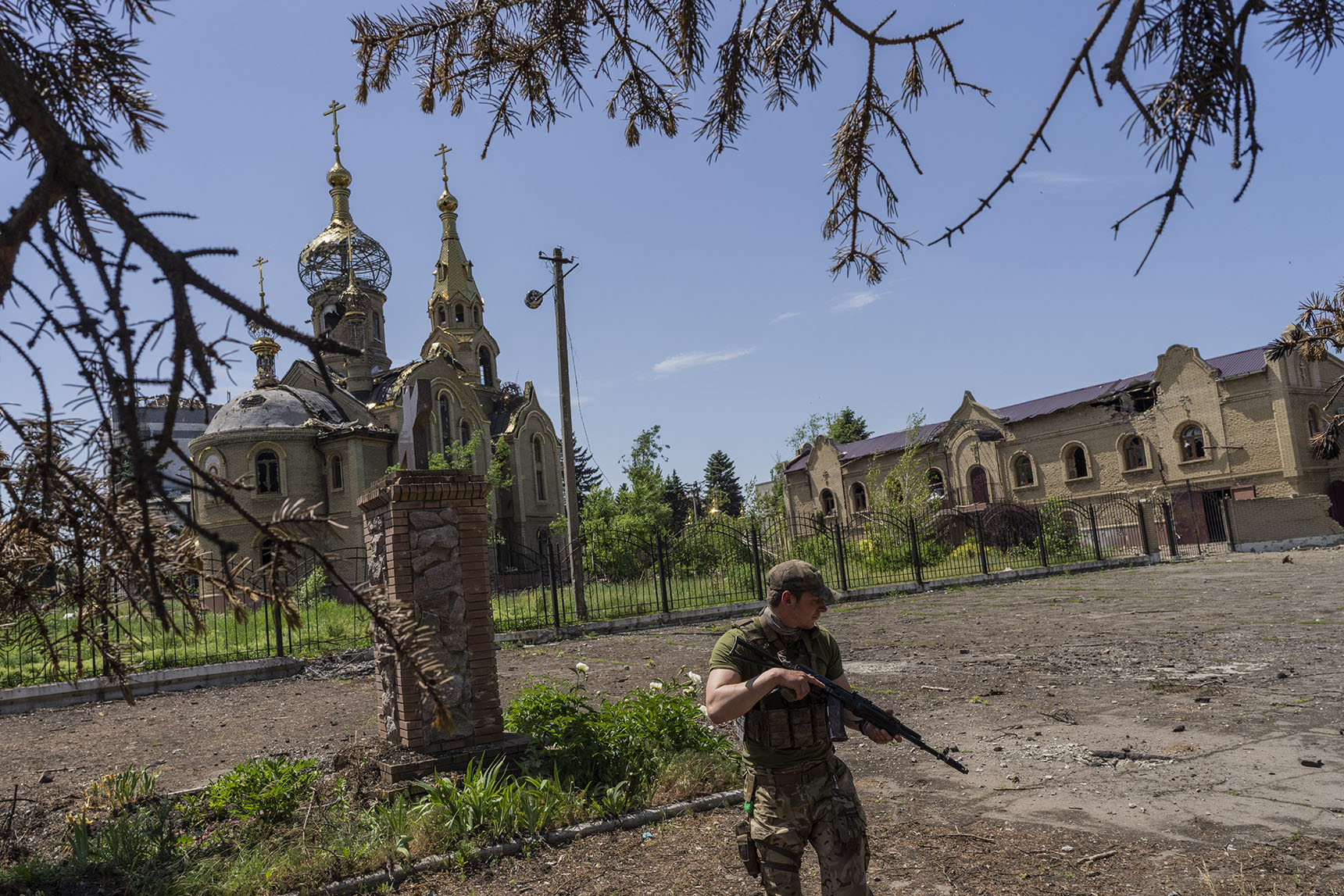 A Ukrainian soldier patrols a village Thursday near the front line in the Donetsk oblast region in eastern Ukraine. Ukrainian President Volodymyr Zelenskyy, calling for more weapons from the West, said that “as of today, the occupiers control almost 20% of our territory.” (AP/Bernat Armangue)

Print Headline: Ukrainians hold on as they await West’s aid