Rain in store for Bahamas as Agatha changes to Alex by FREIDA FRISARO AND CURT ANDERSON THE ASSOCIATED PRESS | June 4, 2022 at 4:02 a.m. 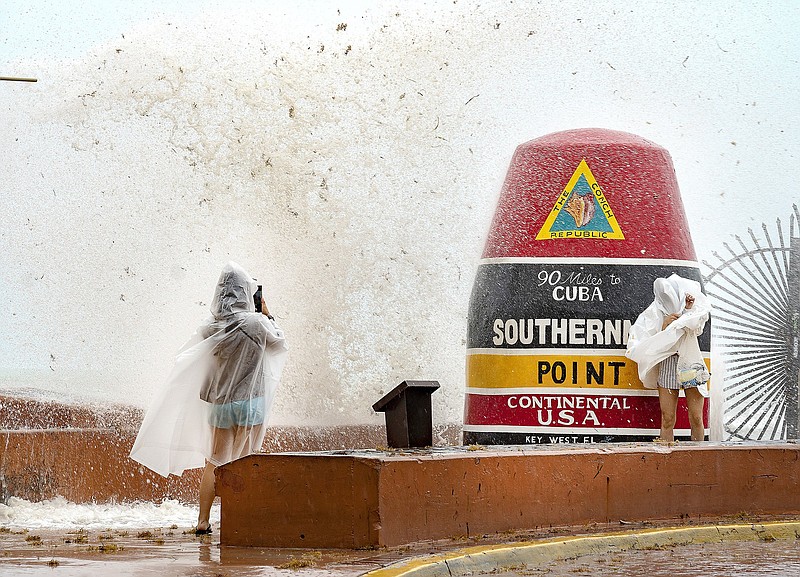 Vistors to the Southernmost Point buoy in Key West, Fla., brave the waves Friday for photos as the island chain was under a tropical storm warning on Friday. (AP/The Key West Citizen/Rob O’Neal)

FORT LAUDERDALE, Fla. -- Tropical storm warnings were issued Friday for much of the Florida peninsula, Cuba and the Bahamas as a system that battered Mexico moves through the Gulf of Mexico, bringing threats of heavy rain and wind for the weekend.

The National Hurricane Center in Miami said the storm once known as Agatha in the Pacific Ocean will be known as Alex in the Atlantic Ocean basin.

A Friday evening advisory from the center said the storm was picking up speed to the northeast and had maximum sustained winds of 40 mph, just above the tropical storm threshold. At 8 p.m., forecasters said the disturbance was about 300 miles southwest of Fort Myers, Fla., moving at about 7 miles per hour.

A Hurricane Center advisory said the system was expected to develop "a well-defined center and become a tropical storm" as it approaches Florida on Friday night and into today.

In Cuba, heavy downpours brought by the system caused landslides and accidents that left two people dead in the capital, Havana, state media reported. A person was also reported missing in Pinar del Rio province after falling into a rain-swollen river.

Miami-Dade County Mayor Daniella Levine Cava said most government services, such as bus routes and trains, planned to operate as normal over the weekend.

"If it isn't necessary to go out, it's probably better to stay home," she said Friday.

The storm warning affects both Florida's Gulf Coast and Atlantic Coast, from just below Tampa Bay and Daytona Beach to the Florida Keys and Dry Tortugas. Parts of Cuba, including the provinces of Pinar del Rio, Artemisa, La Habana and Mayabeque, and the northwestern Bahamas are also under a warning with tropical-storm-force conditions expected within 36 hours.

The National Hurricane Center predicts that rainfall up to 10 inches is possible in South Florida, including the Florida Keys. The storm is not expected to produce huge winds or major storm surge, but local flooding is likely and winds could be somewhat strong.

"Heavy rains will begin to affect South Florida and the Keys Friday and continue through Saturday," the Hurricane Center said in an online post. Also predicted is storm surge and flooding, the severity of which depends on the timing of tides.

Florida Gov. Ron DeSantis said the forecast was somewhat unusual in that substantial rains were expected in southwestern Florida on Friday and windy but drier conditions today. "The rain is actually beating the wind" instead of the two coming together, he said.

"No one's going into emergency posture" yet, DeSantis said, but authorities would monitor for a strengthening storm. "We've got to be ready no matter what."

Some cities and counties across Florida's coastal and low-lying areas, including Pembroke Pines and Miami-Dade County, were offering sandbags to residents to shore up their homes on Friday morning.

As a Pacific storm, Hurricane Agatha caused flooding and mudslides that killed at least 11 people and left 20 missing in Mexico, officials said. It caused rivers to overflow their banks and swept away people in homes, while other victims were buried under mud and rocks.

Agatha made history as the strongest hurricane ever recorded to come ashore in May during the eastern Pacific hurricane season since 1949. Climate scientists say tropical systems will become more powerful and destructive because of global warming. 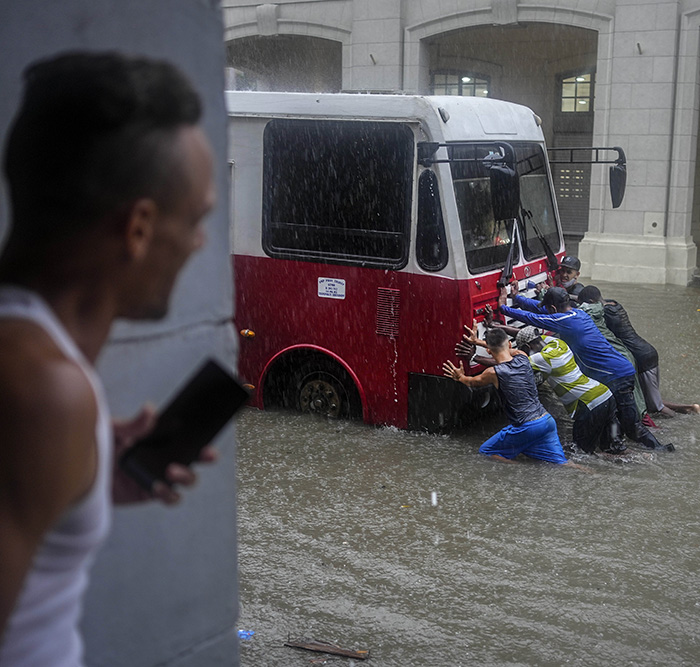 Volunteers push a stalled bus through a flooded street Friday in Havana, Cuba, as Tropical Storm Alex unleashes nonstop rain. The storm, which formed in the Pacific as Agatha, threatens to drench much of the Florida peninsula, Cuba and the Bahamas all weekend. More photos at arkansasonline.com/64havana/. (AP/Ramon Espinosa)

Gallery: Storms in the Gulf of Mexico