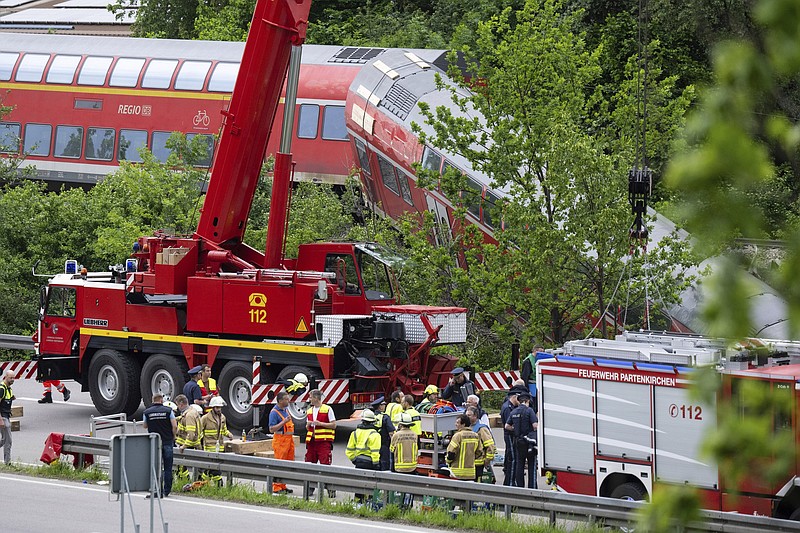 Emergency and rescue forces work on the site of a train crash Friday in Burgrain, Germany. (AP/Sven Hoppe)

FRANKFURT, Germany -- Police said Saturday the body of a fifth victim has been been found beneath a train that derailed Friday in the Alps in southern Germany.

The man's body was uncovered after initial attempts to lift the derailed carriages failed. Recovery workers had to wait for a heavy crane to be brought to the site near the resort town of Garmisch-Partenkirchen.

The cause of the derailment was under investigation.

About 140 people were on the train at the time, including students headed home from school for the Whitsun holiday. Police for the southern Bavaria region said 44 people were injured.

The regional train headed for Munich went off the tracks after noon Friday in Burgrain after pulling out of the resort town from where it had set off. Three of the double-deck carriages overturned at least partly and people were pulled out of the windows to safety.

LUCKNOW, India -- At least eight workers were killed and over a dozen others injured after a fire broke out in a chemical factory in northern India, police said Saturday.

The fire started after a boiler exploded in the factory in the Hapur area of Uttar Pradesh state, said senior police officer Pravin Kumar. The injured have been hospitalized and three of them were in critical condition, he said.

The intensity of the blast blew off the factory's roof, said Ajay Mishra, a rescue worker.

South Korea's Joint Chiefs of Staff said the missiles were fired in succession over 35 minutes from the Sunan area near the capital, Pyongyang. It didn't immediately say how far the missiles flew but noted the South Korean military has heightened its monitoring in case the North fires more missiles.

The launch came a day after the U.S. aircraft carrier Ronald Reagan concluded a three-day naval drill with South Korea in the Philippine Sea, apparently their first drill involving a carrier since November 2017, as the countries move to upgrade their defense exercises in the face of growing North Korean threats.

The launch was North Korea's 18th round of missile tests in 2022 alone -- a streak that has included the country's first demonstrations of intercontinental ballistic missiles in nearly five years -- as it continues a push toward weapons development at a time when the U.N. Security Council is divided over Russia's war on Ukraine.

South Korean and U.S. officials say there are signs that North Korea is also pressing ahead with preparations at its nuclear testing ground in the northeastern town of Punggye-ri. The North's next nuclear test would be its seventh since 2006 and the first since September 2017, when it claimed to have detonated a thermonuclear bomb to fit on its ICBMs.

On Friday, President Joe Biden's special envoy for North Korea, Sung Kim, said Washington is "preparing for all contingencies" in close coordination with its Asian allies as he participated in a trilateral meeting in Seoul with his South Korean and Japanese counterparts over the nuclear standoff with North Korea.

Nuclear negotiations between Washington and Pyongyang have stalled since 2019 over disagreements in exchanging the release of U.S.-led sanctions against North Korea and the North's disarmament steps.

BEIJING -- The driver of a high-speed train in southern China was killed and eight people were injured when two cars derailed early Saturday after hitting a mudslide, state broadcaster CCTV reported.

The accident occurred midmorning as the train was entering a tunnel in the inland southern province of Guizhou. It had been traveling on a regular route to the coastal business center of Guangzhou.

Those injured were in stable condition and the other 136 people aboard the train were evacuated safely, CCTV said.

The cause of the accident is under investigation. Landslides have become common in the region from a combination of heavy precipitation and the development of infrastructure in mountainous areas.

China has the world's most extensive high-speed rail network, with 24,855 miles of tracks nationwide and trains running at more than 186 miles per hour. Hundreds of millions of passengers are carried annually, although that figure has been severely reduced under pandemic-related travel restrictions.

The system's safety record has been generally good, with the exception of a 2011 collision between two trains outside the southern city of Wenzhou that left at least 40 people dead and prompted a public uproar over an apparent effort to cover up the extent of the damage.