Hutchinson supports proposal to raise minimum salaries of teachers to $46,000 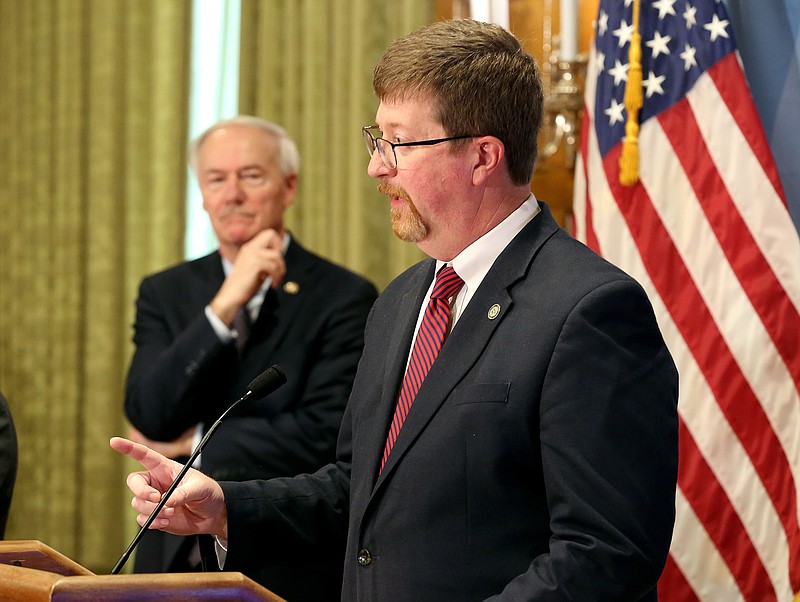 Gov. Asa Hutchinson has surprised many state lawmakers with a proposal to boost teacher salaries as a possible item in a special session that he said he could call as soon as July or August.

With a projected state surplus of $1.47 billion in fiscal 2022 that ends June 30, Hutchinson has repeatedly brought up in the past two months the possibility of calling a special session to provide more tax relief to Arkansans struggling with inflation, including the rising costs of food and gasoline.

At a news conference Thursday, the Republican governor added public school security and safety as another item for the possible special session. That comes on the heels of the May 24 attack in Uvalde, Texas, by a lone gunman at an elementary school that left 19 students and two teachers dead and 17 others injured.

Hutchinson, whose eight-year stint as governor ends in January, acknowledged Thursday that there have been ongoing discussions about the possibility of raising teacher salaries, but "we have got to look at the entire budget picture and the uncertainty in the economy in the future and make a judgment as to what we can do and when we can do it."

Department of Education Secretary Johnny Key said in an email dated May 5 to the governor's Deputy Chief of Staff of External Operations Bill Gossage that implementing the $4,000 salary increase, combined with a new minimum salary of $46,000, would cause Arkansas to leap up the rankings of states for average salary.

"We estimate that under this scenario, the average teacher salary would be near $60,000," Key said in the email obtained by the Arkansas Democrat-Gazette under the Arkansas Freedom of Information Act.

"Based on the NEA estimates for 2021-22 ... we would rank higher than all surrounding states, and conceivably could go from a ranking of 46 in the 2020-21 school year to ranking in the top half of the nation. Of course, this could vary depending on legislative action in other states," he said.

But Senate President Pro Tempore Jimmy Hickey, R-Texarkana, said Hutchinson's proposal to raise teacher salaries would cost about $333 million and "I don't see we get anywhere close to that.

"That's a huge lift," he said. That's "way in excess of what the Legislature would look at," he said.

Asked what led to the development of the teacher pay raise proposal, Hutchinson said Friday that teachers are critical to the success of Arkansas.

"We need to continue to invest in our teachers and competitive pay is an important factor," the governor said in a written statement. "Lawmakers in Mississippi recently passed the largest teacher pay increase in their state's history. To stay competitive and to combat a teacher shortage it is important that we evaluate what level of increase the state can afford."

Key said Friday in a written statement that "We realize that $333 million is a significant amount out of the projected surplus, but based on what I am hearing from superintendents and education leaders around the state, it needs to be a top priority.

"We have worked closely with [state Department of Finance and Administration] to be confident that its current forecast supports the proposal for [fiscal year] 2023 and beyond," he said.

"However, if we wait until the next regular session [in 2023] instead of seizing this moment to increase salaries for the next school year, it puts us another year behind surrounding states, and we will lose the tremendous opportunity this presents for teacher recruitment and retention," Key said.

The cost for a $4,000 increase for teachers, including counselors and other licensed building-level personnel, is about $200 million, he said. The proposal would add $425 to the foundation funding amount that goes to school districts and charter schools.

Key said Hutchinson and the General Assembly have made great strides since 2015 increasing the state's base salary from $29,244 to $36,000, but surrounding states have increased theirs as well.

"Going into the 2022-23 school year, base salaries in Oklahoma, Missouri, Tennessee, and Mississippi are all higher than Arkansas," he said in his written statement. "Mississippi just increased its base salary to $41,500 along with an approximately $5,000 salary increase for every teacher. This proposal does more than just catch us up. It would make us the leading state in the region. It would help us attract new teachers to the profession, and it would make Arkansas more attractive for current teachers to stay in their present district, or help them reconsider leaving the profession altogether."

Asked about her thoughts on this proposal, Senate Education Committee Chairwoman Missy Irvin, R-Mountain View, said Friday that "I cannot comment on this because I have not been briefed by Secretary Key or the Executive Branch about their proposal."

Asked about his opinion about the proposal, Rep. Brian Evans, R-Cabot, who serves on the House Education Committee, said Friday that he hasn't seen this proposal.

"But I know that there is continuous discussions that are had between the [Legislature's educational] adequacy committee and the [education] department," he said. "I am sure those same conversations happen between the department and the governor's office. We'll be happy to sit down with all parties and look at this plan and see if we can make this work."

"To have a plan in 30 days to have a special session, we'll just be throwing money," said Jean, a co-chairman of the Joint Budget Committee.

"We need to have some study and a target for the [regular] session," starting in January, he said. "Also, we'll have more [information] of how much inflation is hitting on food prices, fuel prices, energy prices and the security to run these schools."

Nonetheless, Hutchinson said Friday that the teacher pay proposal is still being considered as a special session item up for discussion.

"Ultimately, this is a legislative decision but I have laid out alternatives to be considered," he said.

On the tax cut front, Hutchinson on Thursday signaled his support for accelerating the implementation of cutting the state's top individual income tax rate from 5.5% to 4.9%, retroactive to Jan. 1, 2022, in a possible special session based on the state's general revenue tax collections, projected surpluses and projections for future general revenue collections.

Jean said he also expects a consensus to emerge between lawmakers and the governor to enact some type of tax refund or tax credit in the possible special session.

Asked if there is a tax cut proposal geared for low-income Arkansans that the governor favors for the special session, Hutchinson said Friday that "One of the goals of our tax cut proposals is to give Arkansans relief from inflationary costs.

"We continue to discuss the fairest ways to provide that relief," the governor said. "Based upon that principle we are looking at accelerating the tax code, while also considering potential corresponding low- and middle-income reductions."

Hutchinson said Friday that he hasn't taken a position on the subject at this time, adding that he has not received a finance department report on the cost involved in this proposed change.

According to finance department records, $250 million of the state's projected $1.47 billion surplus in fiscal 2022 already has been obligated by the Legislature and the governor.

Besides using $333 million of the projected general revenue surplus for the teacher salary increase, other potential uses of the surplus include $202 million for a new Arkansas Crime Laboratory building, $147 million to pay a third of the cost of a University of Arkansas for Medical Sciences' hospital tower, $300 million to set aside for a reserve fund, and $30 million toward a proposed advanced manufacturing, robotics and automation center in Conway, according to finance department records. The state currently has $1.2 billion in a reserve fund called the catastrophic reserve fund.

If all these possible uses of surplus were funded, that would leave the state with an unobligated surplus of $211 million from what's currently a projected surplus of $1.47 billion in fiscal 2022, according to finance department records.

The finance department currently projects a $914 million general revenue surplus at the end of fiscal 2023, which starts July 1 and ends June 30, 2023. Accelerating the implementation of the top individual income tax rate cut to 4.9%, plus enacting middle-income and low-income tax cut proposals would leave a general revenue surplus of $471.8 million at the end of fiscal 2023, the finance department estimates.