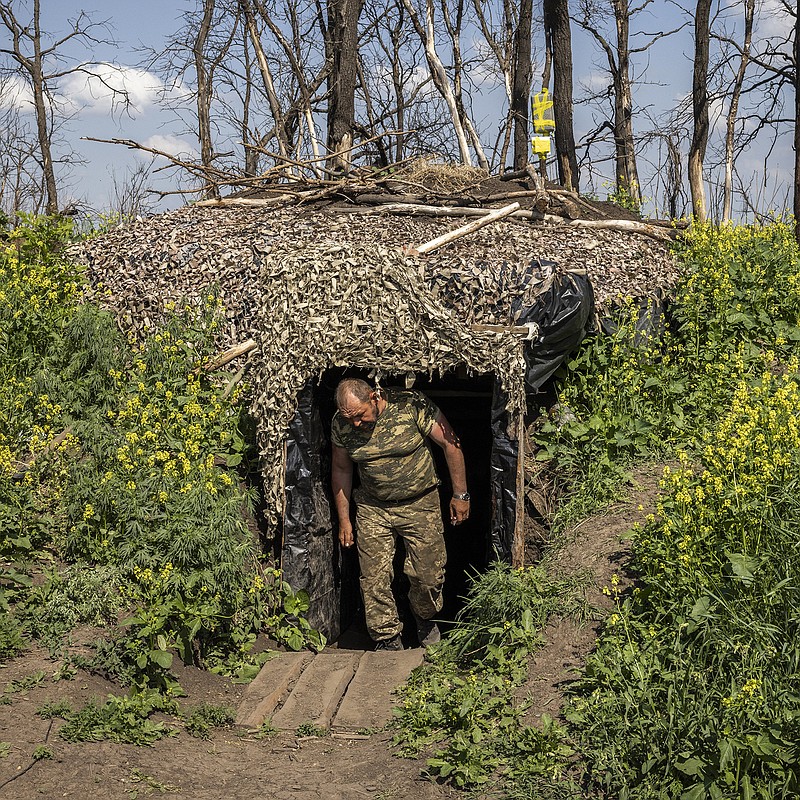 A Ukrainian soldier leaves a bunker Saturday near the front line in the eastern Donetsk region of Ukraine as Ukrainian troops tried to claw back territory and stave off a fierce Russian assault. More photos at arkansasonline.com/ukrainemonth4/. (The New York Times/Ivor Prickett)

KYIV, Ukraine -- Reinforced Russian troops backed by airstrikes pummeled a portion of eastern Ukraine on Saturday, blowing up bridges and shelling apartment buildings as they fought to capture two cities that would put a contested province under Moscow's control, Ukrainian officials said.

Russian and Ukrainian forces battled street-by-street in Sievierodonetsk and neighboring Lysychansk, the regional governor, Serhiy Haidai, said. Russian strikes killed four people, including a mother and child, in the nearby village of Hirske, Haidai said.

The cities are the last major areas of Luhansk province still held by Ukraine. The Russian attacks are central to the Kremlin's reduced wartime goal of seizing the entire Donbas region, where Moscow-backed separatists have fought Ukrainian forces for eight years and established self-proclaimed republics.

Russia also escalated attacks in Donetsk, the other province that makes up the Donbas, the Ukrainian military said as the war reached its 101st day.

Reflecting the close combat, Russian and Ukrainian military officers blamed one another for a fire that destroyed a 1912 wooden church at the Sviatohirsk monastery, one of Ukraine's holiest Orthodox Christian sites. The sprawling, 16th-century monastery, which sits on the bank of the Siverskiy Donets River, has been hit several times previously during the war, most recently on Wednesday, when three monks were killed.

In his nightly video address Saturday, President Volodymyr Zelenskyy accused Russia of "deliberately and systematically destroying Ukrainian culture and its historical heritage, along with social infrastructure like housing and everything needed for normal life."

He said 113 churches have been damaged or destroyed during the invasion, including some that survived the battles of World War II.

In recent days, Russian forces have focused on capturing Sievierodonetsk, which had a prewar population of about 100,000. At one point they held 90% of the city, but Ukrainian soldiers clawed back some ground, Haidai reported Friday. Zelenskyy described the city's situation as "extremely difficult" on Saturday.

Western military analysts said Russia was devoting significant troop strength and firepower to what British officials called a "creeping advance" in the Donbas.

"The combined use of air and artillery strikes has been a key factor in Russia's recent tactical successes in the region," the U.K. Ministry of Defense said in a Saturday assessment. The ministry warned that after launching so many guided missiles, Russia was employing unguided missiles that have "almost certainly caused substantial collateral damage and civilian casualties."

The Ukrainian military reported that it repelled nine attacks in the Donbas over 24 hours. The claim could not be independently verified.

While Russian forces are concentrated on the Donbas, Ukraine has staged counterattacks to try to regain territory in the south.

After seizing most of the Kherson and Dnipropetrovsk regions, as well as the port city of Mariupol, Moscow has installed local administrators, offered residents Russian passports and taken other steps to consolidate its hold on occupied areas.

The Institute for the Study of War, a Washington-based think tank, said Russian-installed officials and troops face growing resistance among the local population and "an increase in partisan activity in southern Ukraine."

The institute cited accounts on Russian Telegram channels of threats against locals who received Russian passports.

The Ukrainian Center for National Resistance, which established a website to advise people on sabotage and other techniques, said Kherson residents were encouraged to burn down a Russian passport center.

The Ukrainian military noted with approval the trouble that occupation authorities were encountering, saying Russian-installed leaders in Kherson were wearing bulletproof vests and traveling in armored vehicles.

The bodies of more than 1,300 civilians have been exhumed so far in the region around Ukraine's capital after Russia's military retreat from the area, Ukraine's Interior Ministry reported Saturday. The bodies were sent to morgues for forensic examination, and some 200 of the victims have not been identified, ministry spokeswoman Alyona Matveyeva said.

Since Russian forces left the region in early April, Ukrainian authorities have been collecting the dead, exhuming bodies from mass graves and collecting evidence for possible war crimes investigations and prosecutions.

A Russian rocket hit an agricultural site Saturday in the Odesa region, wounding two people, according to a regional military chief. A Russian Defense Ministry spokesman said a missile attack destroyed a base of foreign mercenaries.

Odesa is home to Ukraine's largest seaport and therefore vital to the country's ability to ship grain and other commodities. The attack came hours after Ukrainian Foreign Minister Dmytro Kuleba tweeted: "Ukraine is ready to create necessary conditions to resume exports from the port of Odesa. The question is how to make sure that Russia doesn't abuse the trade route to attack the city."

The lower figures might make Russian commanders "think that they are fighting successfully," the website Meduza quoted Podolyak as saying. Speaking on Ukrainian television, he expressed optimism that new Western-supplied weaponry could change the "mathematics" of the war.

Ukraine has cleared more than 127,000 explosive devices from its territory since Russia invaded in late February, according to a United Nations report.

The report, issued by the U.N. Development Program, said that the retreat of Russian forces from areas in and around Ukraine's capital, Kyiv, and the northeast of the country had "offered space for considerable explosive ordnance cleanup operations."

Most of the efforts to remove unexploded mines, rockets, bombs and artillery shells undertaken by Ukraine's State Emergency Services have been focused on urban areas in the Kyiv, Chernihiv, Sumy and Zhytomyr regions, according to the report, which was issued Wednesday. It added that the emergency service had covered an area of more than 11,000 square miles.

The United Nations has said it could take years to clear all of the mines in Ukraine. Anti-personnel land mines often kill and maim civilians long after hostilities have ended. Ukraine is one of the 164 nations that signed a 1997 treaty banning their use. The United States and Russia have refused to join it.

The United Nations estimates that more than 12 million Ukrainians have been displaced from their homes since Russia launched a full-scale invasion of the country Feb. 24. They've had to "move across a landscape littered with unexploded rockets, bombs and land mines," according to the HALO Trust, a British-American charity that clears land mines and other explosive remnants of war to help countries recover after conflicts.

Ukrainian officials have been warning residents of the dangers of explosives since reports emerged that retreating Russian forces left buried land mines and rigged bombs across large parts of the country.

According to Human Rights Watch, Russian forces also have used a new type of anti-personnel mine in the eastern Kharkiv region equipped with sensors that can detect people walking nearby. When the mine senses a person, it launches a small warhead that is lethal up to 50 feet away.

French President Emmanuel Macron said in an interview with French newspapers Friday that Putin made a "historic error" in invading but world powers shouldn't "humiliate Russia, so that when the fighting stops, we can build a way out together via diplomatic paths."

Kuleba, the foreign minister, tweeted in response: "Calls to avoid humiliation of Russia can only humiliate France and every other country that would call for it. ... We all better focus on how to put Russia in its place. This will bring peace and save lives."

Elsewhere in Europe, Pope Francis said he needs to wait for the "right moment" to go to Ukraine. A Ukrainian refugee who was in a group of children visiting the Vatican asked the pontiff if he would go to his homeland. Francis told the boy he thinks a lot about the children in Ukraine and has a desire to go there.

He said it's "not easy to take a decision that could do more harm to all the world than good. I must find the right moment to do it." The pope said he would discuss the issue this week when Ukrainian government representatives visit the Vatican.

NATO Secretary-General Jens Stoltenberg has met with Finland's prime minister and spoken to Turkey's president as he seeks to overcome Turkish resistance to Finland and Sweden joining the alliance.

Stoltenberg, who visited Washington last week, tweeted late Friday that he met with Finnish Prime Minister Sanna Marin while there and discussed "the need to address Turkey's concerns and move forward" with the Finnish and Swedish membership applications.

Russia's war in Ukraine pushed the Nordic countries to apply to join NATO, but Turkish President Recep Tayyip Erdogan accuses Sweden and Finland of supporting Kurdish militants deemed by Turkey to be terrorists.

Stoltenberg said he had a "constructive phone call" with Erdogan, calling Turkey a "valued ally" and praising Turkish efforts to broker a deal to ensure the safe transportation of grain supplies from Ukraine amid global food shortages caused by Russia's invasion. Stoltenberg tweeted that he and Erdogan would continue their dialogue, without elaborating.

Erdogan's office released a statement in which it said the president had emphasized that Sweden and Finland should "make it clear that they have stopped supporting terrorism," have lifted defense export restrictions on Turkey and are "ready to show alliance solidarity."

The Nordic states, among other countries, imposed limitations on arms sales in the wake of Turkey's 2019 military incursion into northern Syria.

The NATO chief's diplomatic efforts came before a gathering of senior officials from Sweden, Finland and Turkey this week in Brussels, where NATO is based, to discuss Turkey's opposition to the applications.

Information for this article was contributed by John Leicester, Inna Varenytsia, Andrea Rosa and staff members of The Associated Press and Alexandra E. Petri and Cassandra Vinograd of The New York Times. 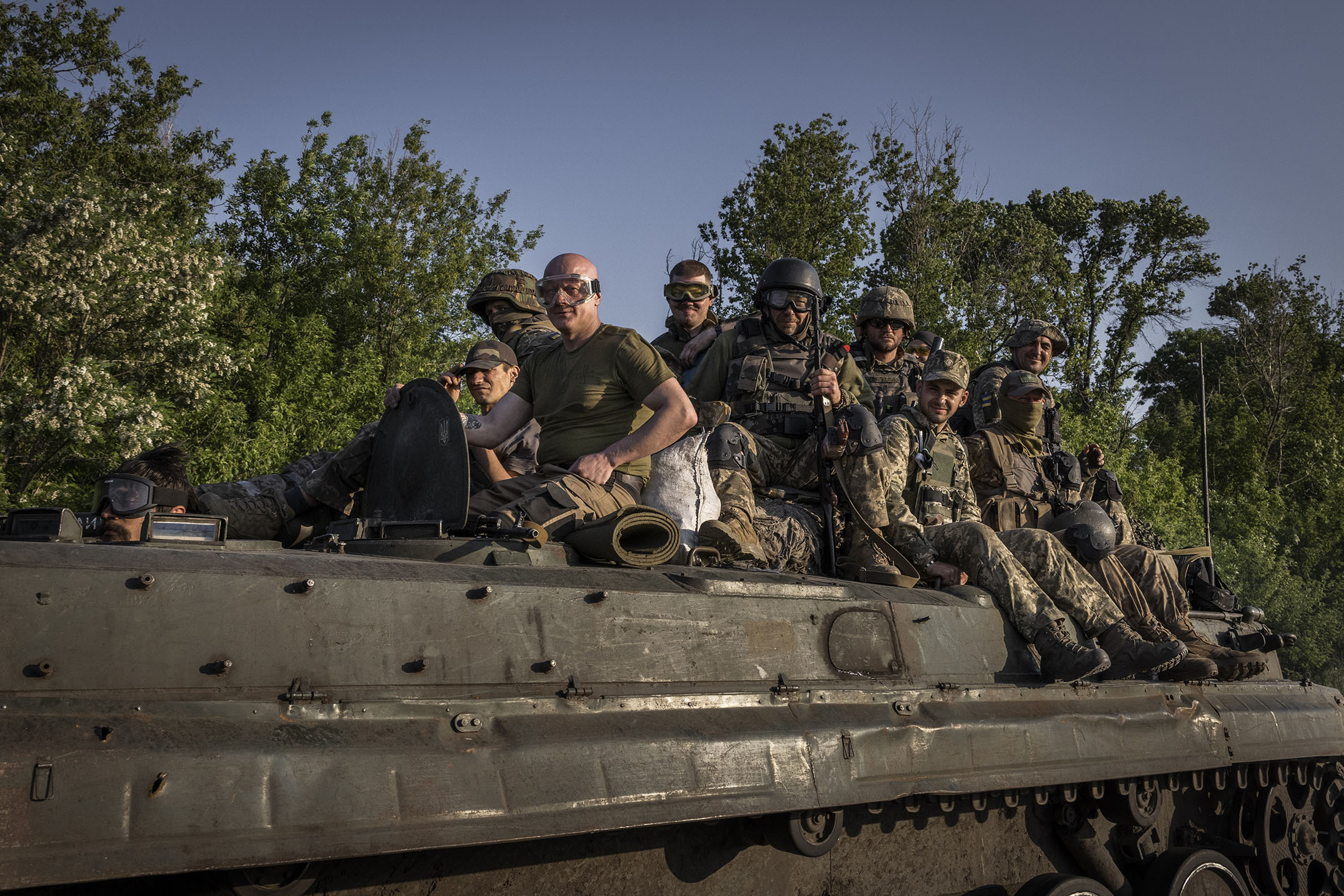 Ukrainian soldiers ride an armored fighting vehicle Saturday in an area near Kramatorsk in the Donbas region of eastern Ukraine. Russia has committed significant troop strength and firepower to what British officials called a “creeping advance” in the Donbas. (The New York Times/Ivor Prickett)