They cultivated their agriculture jobs and their love 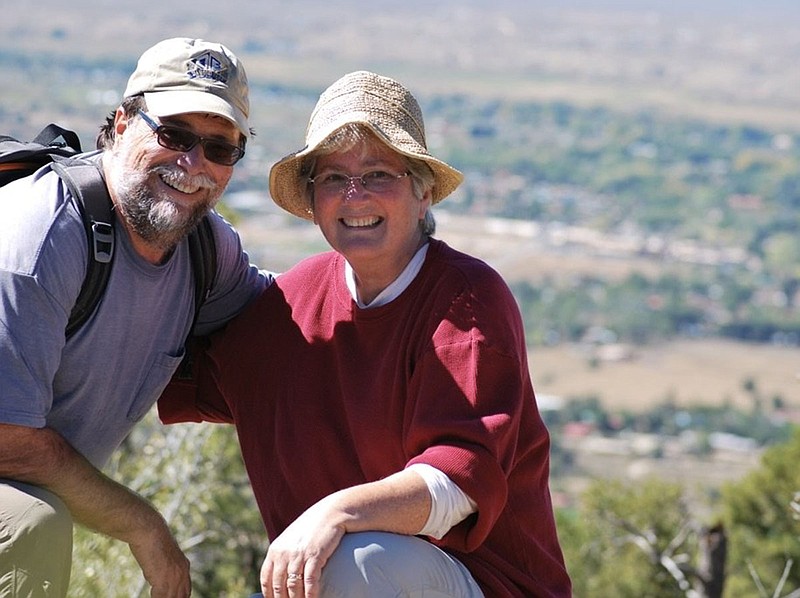 Julia Hohenberg and James Gibbons were each doing agricultural research about 7,000 miles from home when they discovered one another.

Julia, a California native, and James, who grew up in Ozark, were both working at the International Institute of Tropical Agriculture in Oyo State, Nigeria, in 1982.

"We were both post-docs," says Julia, "and we both had connections that enabled us to go do research at this international center."

Julia completed her PhD in soils and plant nutrition at the University of California at Davis, and James finished his in plant breeding from the University of Arkansas at Fayetteville. Their jobs involved improving food crops indigenous to the area, like cowpeas, maize and cassava.

The institute was a 1,000-acre self-contained research area, Julia explains, with laboratories as well as home, service and recreational areas for the people who worked there and its own electric generators and water supply.

James and Julia were each assigned a Volkswagen Beetle to get around, including to remote fields where they would drive to fields outside the institute to work with crews on crop experiments.

The institute's workers socialized often, meeting at the pool, gathering for parties or going into the nearest town to explore.

"You could try and buy groceries," Julia says. "You could go on Saturday mornings and see what they had. On Fridays the University of Ibadan was a neat place to go. They had a place where you could go dancing. And there was always something going on at the institute."

Many of their friends and colleagues attended the same dance they went to on Valentine's Day 1983, but that was the first time they had gone out on an official date.

They began spending time together as often as possible, visiting Benin, or going to the beach in Togo.

"We had a group of friends who would travel in Nigeria and so we would go with our group of friends," says James. "Her mother traveled a lot and so one time after we got to know each other we went to Togo and that's when I asked her mother for her hand in marriage."

They bought an engagement ring from a vendor on the beach in Togo.

"We finally arranged for a day we could have this wedding and it turned out it was in the middle of the week, so we were going to have to take off work," Julia says. "We just planned to go, and then everybody that we worked with -- the whole institute -- all of a sudden they all came with us."

Colleagues of varying nationalities witnessed their civil ceremony at City Hall and offered foods, gifts and traditions from their cultures for a celebration.

"The Germans got us two sawhorses and a log and a two-man saw and we had to saw the log in half to show that we could do something together," she says.

They procured fabric for traditional Nigerian wedding attire for them both, but making James' outfit -- flowing pants and a long, billowy top -- required most of their fabric supply, so Julia borrowed a dress from her German maid of honor instead. "We got orchids from an Indonesian scientist who worked there and then there was a Burmese who sang a Burmese wedding song and the English came with their marzipan wedding cake," she says.

After the wedding there was an American meal.

"We decided to feed everybody fried chicken and potato salad," Julia says. "Then we had Nigerian food catered for our crews -- for his crew and for my crew -- and we had them all over for lunch."

They honeymooned in Cameroon, where James was working on a rice project.

"They just kind of sent me with him and we took a couple of days off on that trip," Julia says. "Cameroon is a really beautiful country. It was a neat trip."

James and Julia finished out their two-year job commitments in Nigeria and moved to a remote area of Colombia to work with a sister institute.

They later made Arkansas home for a few years before returning to Colombia a second time.

As their children approached high school-age they moved back to Arkansas so they could finish their educations here. Their daughter, Nora Gibbons, lives in Santa Fe. N.M.; their son, Andrew Gibbons, lives in Little Rock.

James and Julia visited Arkansas for the holidays about a month after they were married. Julia met James' family for the first time then, and there was a wedding reception for them in Ozark. During that trip, they chose new wedding rings at a jewelry store in Fayetteville.

"I am a geneticist and the rings sort of look like DNA strands," James says.

They have held onto their lust for travel over the years, revisiting places they have been as well as exploring new ones. They don't wait around for a special occasion to hit the road.

Print Headline: They cultivated their agriculture jobs and their love