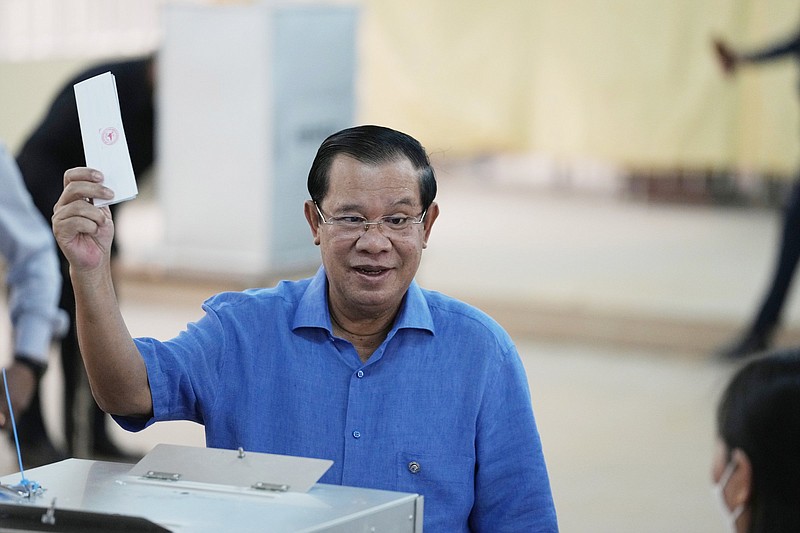 Cambodian Prime Minister Hun Sen, of the Cambodian People's Party (CPP), holds his ballot before dropping it into a ballot box at a polling station in Takhmua in Kandal province, southeast of Phnom Penh, Cambodia, Sunday, June 5, 2022. Cambodians headed to the polls Sunday in local elections that are their first chance to vote since the ruling party of long-serving Prime Minister Hun Sen swept a 2018 general election that was widely criticized as unfair. (AP Photo/Heng Sinith, File)

Hun Sen's Cambodian People's Party was virtually certain to capture the lion's share of 11,622 council seats being contested in 1,652 communes throughout the country. The party has held an iron grip on power for decades and has the huge advantage of controlling almost every local government. Its opponents are less organized, with much fewer resources and have complained of intimidation and threats.

The preliminary results were set to be announced commune by commune by state media Sunday night, but an aggregated official tally won't be given until June 26.

Several governors quoted by the Fresh News website, which is close to the government, said unofficial results showed Hun Sen's party winning most council races in their provinces. Earlier, news websites that broadcast counts from polling stations had generally put the ruling party in the lead.

Turnout was more than 77% out of 9.2 million registered voters, said Prach Chan, chairman of the National Election Committee.

He said the election was free and fair, without intimidation or threats, contrary to the U.N. Human Rights Office in Geneva that last week said there has been a "pattern of threats, intimidation and obstruction targeting opposition candidates."

Hun Sen's party was the only one to field candidates in all the communes. Its most serious challenger was the Candlelight Party, which was rallying opposition supporters.

Hun Sen, an authoritarian ruler in a nominally democratic state, has held power for 37 years. He and his wife cast their ballots Sunday morning in Kandal province near the capital, Phnom Penh. Hun Sen has said he intends to stay in office until 2028 and has endorsed one of his sons to succeed him.

The local elections are held a year ahead of the general election, and are regarded as a test of the parties' strength.

In the last communal elections in 2017, the main opposition Cambodia National Rescue Party made an unexpectedly strong showing, which led Hun Sen's government to crack down on it as well as independent media. The party was dissolved by the Supreme Court on a charge of treason, widely seen as politically motivated, and the free press was driven out of business or cowed into submission.

Without the Cambodian National Rescue Party on the ballot, Hun Sen's party was assured of victory in the general election the following year, taking all the seats in the National Assembly.

Several Western nations imposed sanctions on the government after judging the 2018 election neither free nor fair. The harshest measure came from the European Union, which withdrew some preferential trading privileges.

The dissolved Cambodia National Rescue Party, whose sitting members were also ousted from their political posts, remains banned, with most of its top leaders in exile.

The Candlelight Party sought to take its place though it had to hurriedly organize and came under pressure from the government.

The original Candlelight Party was founded in 1995 by Sam Rainsy, the main political rival of Hun Sen, and later folded into the Cambodia National Rescue Party.