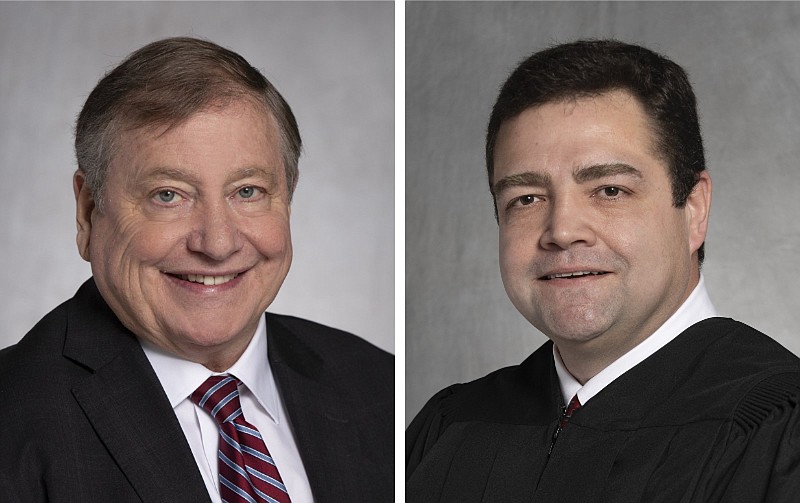 Arkansas Supreme Court Justice Robin Wynne (left) and District Judge Chris Carnahan will face each other in a November 2022 runoff for Position 2 on the state's high court.

The Republican Party of Arkansas has formally endorsed District Judge Chris Carnahan of Conway for the Arkansas Supreme Court in the Nov. 8 runoff election -- a move described by one party official as a first for the organization when it comes to nonpartisan judicial elections.

State Rep. David Ray, R-Maumelle, posted on social media that he wrote and presented a resolution for the Republican Party of Arkansas' State Committee to endorse Carnahan.

Reynolds said that to her knowledge the vote marked the first time the organization has formally endorsed a state Supreme Court candidate.

Carnahan is facing Supreme Court Justice Robin Wynne of Little Rock in the Nov. 8 runoff election for Position 2 on the Arkansas Supreme Court, after Carnahan and Wynne were the two top vote-getters in the May 24 nonpartisan judicial election that included attorney David Sterling of Little Rock.

The state committee resolution states the judiciary is an integral part of government and that the Arkansas Supreme Court is the highest court in the judiciary of Arkansas, holding expansive powers and responsibilities including appellate jurisdiction and judicial review.

The resolution goes on to back Carnahan as the best pick for the Republican Party of Arkansas.

"Whereas, it is critical that judges exercise a philosophy that values the original understanding of our Constitution rather than a philosophy that changes the meaning of the Constitution to conform to evolving societal whims, and that judges read and interpret the law as it was written rather than they wish it were written," the resolution stated.

The resolution describes Carnahan as a judge who declares that his judicial philosophy is simple and time-tested.

"[H]e believes laws passed by the people and the legislature should be respected and interpreted with their original meaning in context; that innocent human life must be protected by judges and the guilty should be humanely punished; and that finally, farmers, business, and citizens need a Supreme Court that allows them to make rational decisions about their economic interests and that will protect private property rights," the document stated.

On Tuesday, Ray told the Arkansas Democrat-Gazette that while candidates run for state Supreme Court as non-partisan, that doesn't mean political parties can't or shouldn't have an opinion about who serves on the state's highest court.

"It's important that we elect people to public office, especially the Supreme Court, who understand the proper role of government and will interpret the law as it was written, not as they wish it were written," he said in an email. "Judge Chris Carnahan has a worldview that values the Constitution and rule of law, and he also has outstanding legal credentials."

Ray said Wynne was an elected Democrat, has donated money to Democrat candidates, and has what he called a troubling record.

Wynne represented the 91st district of the Arkansas House of Representatives as a Democrat from 1985-1988. Carnahan was an executive director of the state Republican Party from 1999-2001.

The Republican Party of Arkansas has been involved in the Supreme Court race before officially announcing its endorsement.

Carnahan and Sterling both reported receiving donations from the Republican Party of Arkansas in April.

Democratic Party of Arkansas Chair Grant Tennille told the Arkansas Democrat-Gazette in a written statement that his party doesn't take a position in nonpartisan judicial elections.

Carnahan told the Arkansas Democrat-Gazette he is glad when anyone takes interest in his campaign for Supreme Court.

"I fully support the Republican Party of Arkansas' Constitutional Rights as an organization to weigh in on this race, as I do any other person or organization," he said.

When asked whether the endorsement will be used by his campaign, Carnahan said he doesn't publicly discuss such matters beyond the disclosures that are required by law.

In 2000, voters approved approved a constitutional amendment shifting the state to nonpartisan judicial elections, starting in 2002. The push resulted from concerns in national judicial circles that judicial races had become too much like races for other public offices and threatened an independent judiciary.

However, the state Senate that year stripped out of the bill setting up the referendum a provision to prohibit nonpartisan judicial candidates from seeking the endorsement of a political party or purporting to have been endorsed by a party.