An octopus motif is omnipresent at Mar y Tierra Cantina & Grill. It’s on the logo, which appears throughout the restaurant, emblazoned on the chairs in the dining rooms and in the bar and here and there on the walls. A fanciful cephalopod extends all the way across the ceiling in the entranceway.

But despite a fairly lengthy selection of seafood items, as you would expect from the name, the only octopus on the menu is the one in the logo. No pulpo, as they say in Spanish.

Mar y Tierra, on Little Rock’s West Third Street near the state Capitol, does not hold the record for the longest wait for an area restaurant between announcement and opening — that honor most likely belongs to Kobe Japanese Steakhouse & Sushi, which was nothing but a sign saying “coming soon” for about five years on a plot of unbroken land on Little Rock’s Financial Center Parkway.

But it’s certainly high on the list of lengthy “approaches” — 2 ½ years between the first report, in November 2019, that the restaurant was pending and the date last month (May 3) that the doors actually opened. In that interim, the place faced all kinds of construction delays, not to mention changes in chef, ownership, management and even the name.

Based on a sampling, in-house and to-go, of its extensive menu, which co-owner Hugo Rios proudly proclaims has more than 200 items, we can declare that it has been worth the wait. And we hope it survives in a revolving-door space that has housed at least eight former eating and drinking establishments over the past two decades or so, some of which had extremely short life spans. 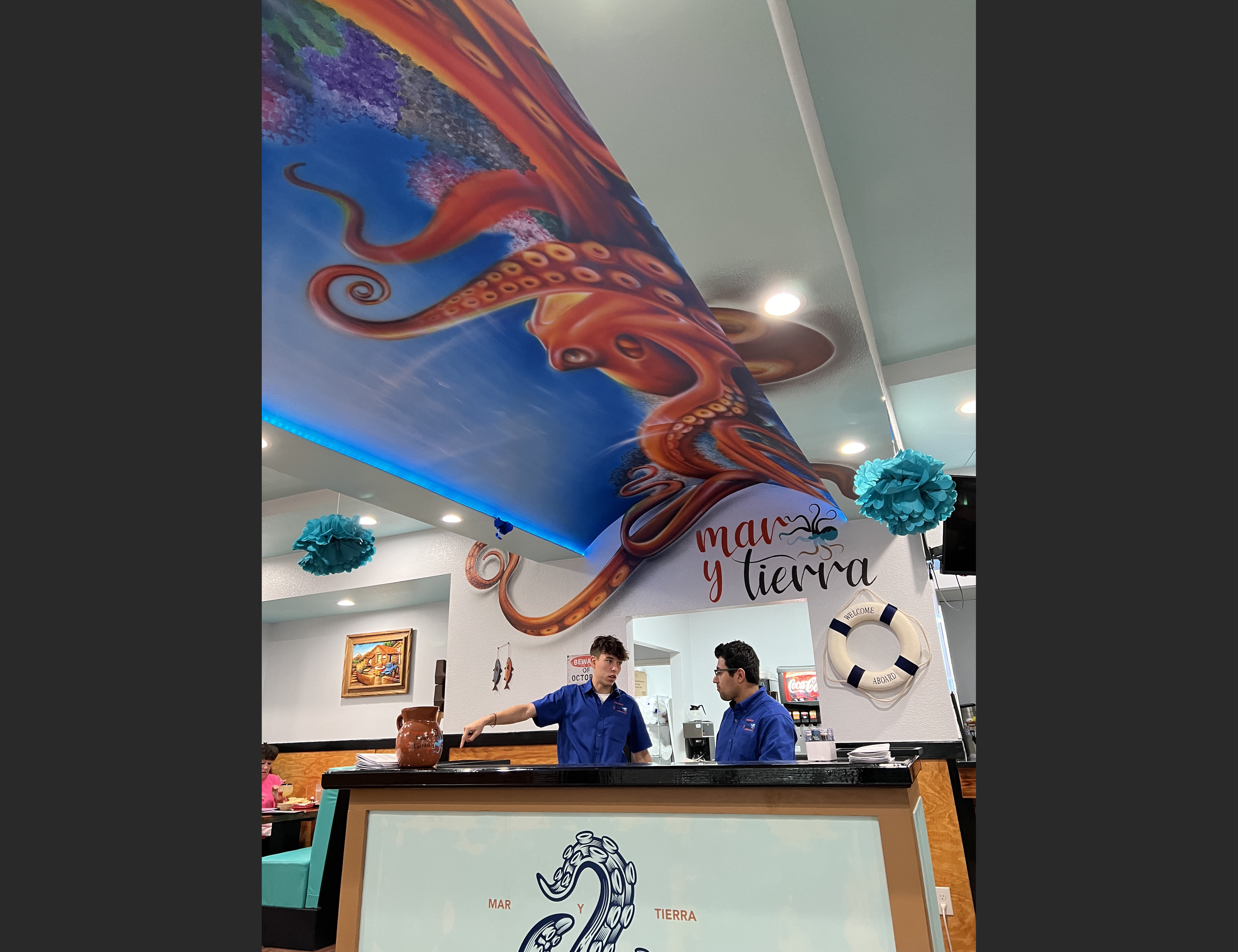 The octopus motif is omnipresent at Mar y Tierra Cantina & Grill, on the logo and also on the walls — a fanciful cephalopod extends all the way across the ceiling in the entranceway — but not on the menu. (Arkansas Democrat-Gazette/Eric E. Harrison)
The food so far has been good, priced just a smidge higher, perhaps, than much of its Mexican restaurant competition, although for immense portions. The staff is friendly and service has been good. There’s a pleasant patio with a good view of the Capitol building. The parking lot, however, is a little weird — it sort of wraps around the building and both the entrance and exit are on the back (west) side.

The complimentary chips have universally been fresh and crisp, not just at lunch, when you know they’ve just come out of the fryer, but also at dinner. The consistency of the complimentary red salsa has been consistent but we’ve noticed that the level of spiciness has varied slightly in the month since we first tried it, indicating that perhaps it’s still a work in progress.

Otherwise, start with the white cheese dip at $4.25 for the regular size, which is more than enough for a single diner. The $6.99 large was more cheese dip than we needed to feed a party of three. It’s got a light but pleasant kick, and the consistency remained fluid even after it sat for a bit on the table — it thickened just a little but never developed a skin, as queso often does. Appetizers on our list for future visits include Guacamole Mexicano (“freshly chopped avocado with onions, tomatoes, cilantro and jalapenos,” $7.99), a Ground Beef Dip (also $7.99) and the Queso Fundido ($8.99).

Mostly we tried and were satisfied, or even excited by, Mar y Tierra versions of stuff we’ve enjoyed at other area establishments. The Alambre, for example (normally $14.99 but on a weekend “special” for $13.99, $16.99 if you get it either with shrimp instead or adding shrimp) was delicious — chicken, steak or mixed grilled meat with bits of bacon and ham, green peppers and onions, topped with a a lot of melted cheese, even more than we expected. A pleasant orange rice and rather soupy refried beans came on the side. It was a monster portion — we took about half of it home — and made a nice lunch even as cold leftovers.

We also enjoyed our Molcajete ($16.99), another of the Especialidades Mar y Tierra, grilled chicken, steak and shrimp in a slightly tart green sauce, served in a “stone” cauldron and garnished with a split ancho chile.

Intrepid Companion was thrilled to discover charro beans, a relative rarity on area menus, “cooked slowly to perfection with bacon and sliced wiener, the good old country way.” And while they didn’t meet her “gold” standard — established at an unidentified Hot Springs restaurant — she enjoyed them. We enjoyed even more seeing that the kitchen substituted them for her soupy side of refried beans and didn’t charge us the $4.99 menu price.

We can highly recommend Mar y Tierra’s Carnitas ($14.99), marinated and roasted pork tips, because they were lean, tasty and tender — just short of melt-in-your-mouth tender, true, but a lot closer to that than we’ve had around here (too many places overcook carnitas to unpleasant toughness). And the portion, which we got to go, was almost too large to finish. It, too, comes with rice, beans and a small salad topped with a mild and unimpressive guacamole.

We felt compelled to try a couple of seafood items, with mixed results. The Seafood Fajitas ($16.99) included shrimp, tiny scallops and rolled surimi (the menu says crab meat but of course that’s expensive, so instead we get quasi-crab) on a not-quite-still-sizzling skillet with bell peppers, onions and tomatoes. It had a pleasant after-spice that accumulated on the back of the tongue but on the whole we were not especially impressed. Nor were we much impressed by the bland Quesadilla Seafood ($12.99), a grilled flour tortilla wrapping “crab meat,” shrimp and much larger scallops with the same veggies as in the fajitas.

The menu is rife with other options, including nine chicken dishes, seven steak dishes, nine versions of fajitas, three soups, a range of Ranchero Specials (“our most popular meals,” saith the menu, though it doesn’t provide much detail in the description), a range of vegetarian possibilities, enchiladas, tacos, chimichangas, burritos and a surprisingly large list of desserts (including, to Intrepid Companion’s delight, fried ice cream, which also, she indicates, has been hard to find hereabouts; that’s something else to try on a subsequent visit, because we were far too full for dessert this time around).

Service was exceptionally friendly, as we mentioned, both at table and for to-go orders, though we had a couple of itty-bitty glitches for our in-house meal, possibly as a result of things being lost in translation — two people in the party requested flour tortillas with their entrees, while one requested corn tortillas, and all three got flour. And we were not offered refills on our soft drinks.

Print Headline: Worth the wait