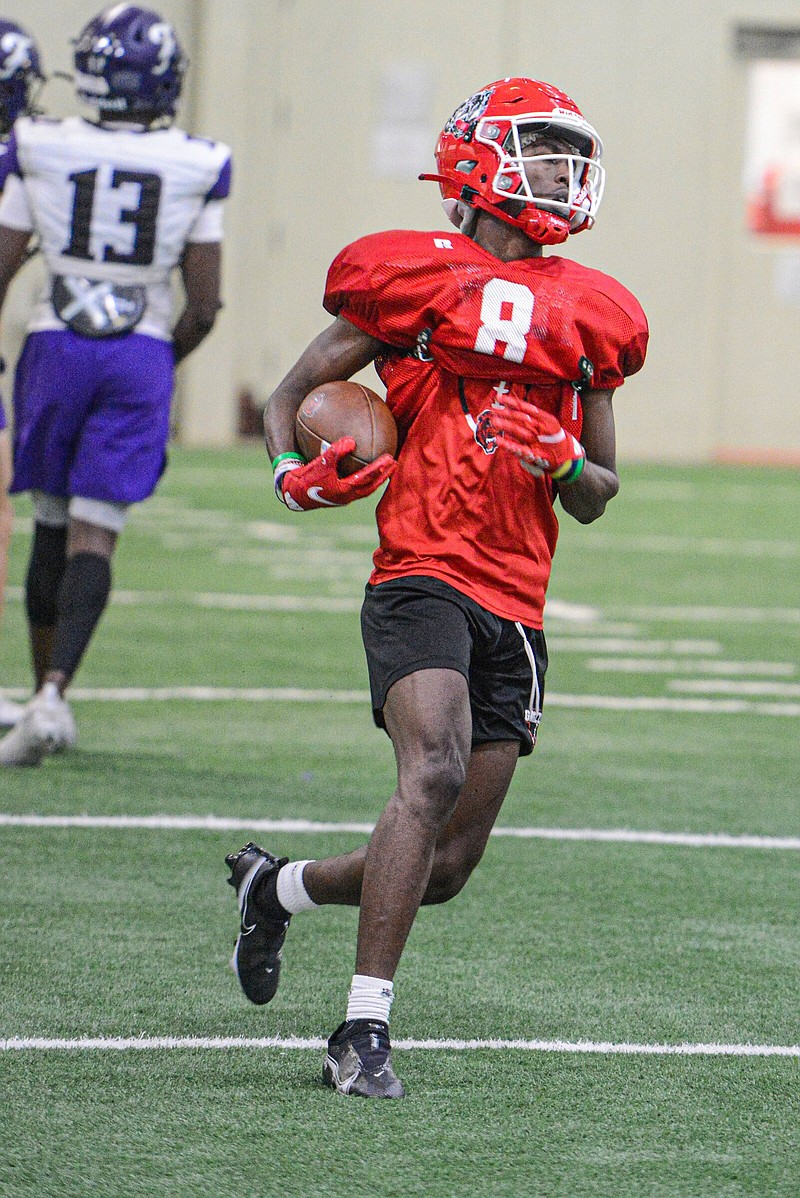 Fort Smith Northside’s Damari Smith caught four touchdown passes last season as a junior for the Grizzlies, who advanced to the second round of the Class 7A playoffs. Smith and the Grizzlies took part in a team camp at Northside on Wednesday and were joined by Greenwood, Alma, Fayetteville and Fort Smith Southside. (NWA Democrat-Gazette/Hank Layton)

That continued Wednesday morning, only now on a football field with the Grizzlies hosting a team camp for area programs. Smith enters his senior year with plenty of momentum. He was able to win the 200 meter state championship and finished third in the 100 meters while coming off a 460-yard receiving season with 32 catches and four touchdowns.

"The speed is always there with him," Northside first-year coach Felix Curry said. "He is getting a chance now to put it all together. That's what these reps out here are good for. If he stays healthy, we are good up front and at quarterback, he can have a very good year."

Smith flashed his big-play ability on the road last year against Little Rock Catholic in his best game of the season. He finished with a season-best 119 yards on five catches with two touchdowns. He now hopes to put more games together like that for the Grizzlies, who finished 7-5 last year and made it to the second round of the playoffs.

He will have somebody new throwing him the ball though. Northside will be breaking in a new quarterback with Daemarion Savoy and McLane Moody battling for the job. Smith said he feels comfortable with whoever wins the position.

"I'm feeling pretty fast coming off that track season," Smith said. "It helped me a lot working on my speed. I feel like this could be a special season for us. We feel good about whoever wins that quarterback battle. I love those guys. They are trying to get me the ball to get it all started."

Northside was joined at the team camp by Greenwood, Alma, Fayetteville and Fort Smith Southside. The action was fast and furious indoors with a thunderstorm in the area throughout the hour and a half long event. The teams were limited to just one offense and one defense going against each other inside, but teams were able to rotate in and out quickly to offset the limitations.

The offensive weapons were plentiful Wednesday for Greenwood, which returns quarterback Hunter Houston (3,080 passing yards with 26 touchdowns) along with Aiden Kennon and L.J. Robins back at wide receiver. That duo combined for more than 2,000 receiving yards with 17 touchdowns.

One of the missing pieces to the high-powered offense returned Wednesday with running back Jake Glover, who was on pace for a special season last year before breaking his tibia early in the year. He finished with 79 rushes for 576 yards (7.3 yards per carry) with seven touchdowns. His last healthy game was his best, rushing for 209 yards on 23 carries with four touchdowns.

Greenwood is working him back cautiously, but he is ready to make another huge impact for the 6A state runner-up Bulldogs.

"I feel so good running around and cutting again," Glover said. "It's good to be out here again. Even if we want to hold me out for a little bit, it's just great to be out here. Last year was so hard. You put a lot of work into this and good things were happening for me. It was over before it started. But we'll get back there."

Greenwood coach Chris Young said he loves what he is seeing from Glover and the other players expected to get touches at the running back position to keep defenses balanced.

"Losing Glover was a big problem for our football team," Young said. "We are at our best on offense when we can throw and run the ball. We are getting healthier at that position with Javon Williamson as well. We expect both those guys to have great years. Jake is a good football player but an even better leader. He wants to get out there. But we want him ready to go in August."

Alma made plenty of strides last season during a 3-7 campaign a year ago. Quarterback Joe Trusty returns after getting the offense going in the right direction with the Airedales averaging 26 points per game.

The shift of focus for Alma coach Rusty Bush now is on the defense, which allowed 37 points per game. Bush, a defensive coach in the past, has taken over the unit and has installed a brand new system. It is drawing rave reviews from the players, who have enjoyed working more hands on with their coach on that side of the ball.

"I think we struggled a little on defense last year giving up points," Alma running back and safety Brady Noyes said. "But this year we have a new defense and a new coordinator with coach Bush taking over. I feel like once we get that down, we have a chance to win a whole bunch more games this year. The defense has completely changed and looks better."

Fayetteville looked much different on offense Wednesday than it did a year ago. That happens when you graduate a starting quarterback in Bladen Fike (4,000 yards with 44 passing touchdowns) and his three main targets in Isaiah Sategna, Jalen Blackburn and Dylan Kittell.

The Class 7A runner-ups from a year ago now look to reload rather than rebuild. Wide receiver Lach McKinney said he loves the talent he sees around him and hopes to step up to be part of the solution for the Bulldogs.

"It's a lot of pressure," McKinney said. "But I want to try to put this team on my back. There are plenty of guys around me to make plays. The offensive line and quarterbacks are great. I think we have a chance to be good this year. I think people might count us out, but we just have to show them. That's how you prove people wrong."

Southside continued to look Wednesday for its starting quarterback without David Sorg (2,832 passing yards with 26 touchdowns last season), who is out because of an injury. George Herrell and Carter Zimmerman are battling for the job.

What the Mavericks didn't need to look hard for are players to make plays for the signal caller. Amari Tucker returns after he rushed 124 times for 465 yards and 5 touchdowns last year and also caught 52 passes for 377 yards and 4 touchdowns on last year's senior-laden team. His success has continued as his role is set to expand this coming season for Southside, which is coming off a 2-9 year and graduated several of its top skilled position players.

"It was about getting my offseason work in and putting it on the field," Tucker said. "When I got my opportunity, I wanted to make the most out of it. I want to play a big role this year. I want to keep it going for my teammates. I like what we are seeing from the quarterback position. I know these guys can step up for us."