State delegation in U.S. House all vote against gun bill 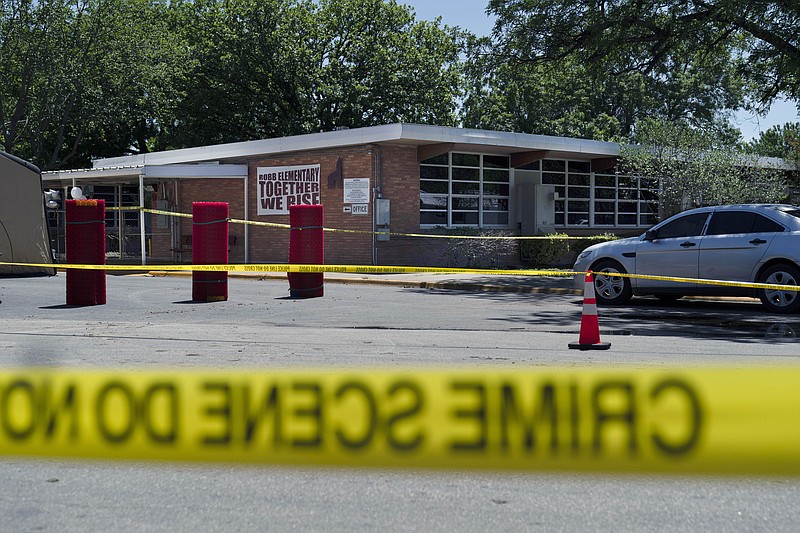 FILE - Crime scene tape surrounds Robb Elementary School in Uvalde, Texas, May 25, 2022. When the gunman arrived at the school, he hopped its fence and easily entered through an unlocked back door, police said. He holed himself up in a fourth-grade classroom where he killed the children and teachers. (AP Photo/Jae C. Hong, File)

The House vote comes more than two weeks after an elementary school shooting in Uvalde, Texas, left 19 students and two teachers dead, a massacre that added fuel to the nation's long-running gun debate and marked another moment in the country's struggle with gun violence.

The legislation cleared the House 223-204 with the support of Democrats and some Republicans. The legislation is not expected to clear the Senate, but a bipartisan group of U.S. senators have been working on how to respond in the aftermath of the mass shooting in Texas.

The 18-year-old gunman in Uvalde bought two guns, an AR-style rifle and a second rifle, days before the May 24 mass shooting at Robb Elementary School.

"Wish we could focus on what would actually make school safer for children instead of attacking the Second Amendment, which Democrats have obviously taken this opportunity to do that," U.S. Rep. Bruce Westerman of Hot Springs said Wednesday ahead of the vote.

There's no guarantee, he said, that a higher purchasing age would have stopped recent mass shootings.

"You can speculate about what would have, could have, should have been, but we don't know that that would have stopped what happened," Westerman said. "I mean these are sick criminals that are obviously breaking laws."

U.S. Rep. Rick Crawford of Jonesboro said House Democrats did not engage in a fair effort to negotiate with Republicans on the legislation.

Crawford, who said he does not view the gun package as a serious legislative effort, said people should not pounce on an incident to score "political points," and accused Democrats of bringing the legislation up for a vote for public relations purposes.

U.S. Rep. French Hill of Little Rock explained his vote in a statement after the House vote Wednesday.

"I did not support the bill that we voted on today because it was not negotiated in bipartisan manner," Hill said in the statement, adding that it "unnecessarily infringes upon the guaranteed constitutional rights of law-abiding citizens."

U.S. Rep. Steve Womack of Rogers, in a statement on Wednesday, said the "focus needs to be on hardening schools, supporting mental health, expanding information sharing, and proactively identifying and halting threats."

In the aftermath of the Uvalde shooting, Arkansas' congressional members pointed to the importance of school security. Both Westerman and Womack support providing additional funds for mental health guidance counselors and school resource officers.

However, Democrats and gun safety advocates argue that legislative action on firearms is necessary to combat mass shootings and other forms of gun violence.

"The federal delegation, just like the Arkansas legislature, is out of step with everyday Arkansans," said Ben Hall, the elections lead with the Arkansas chapter of Moms Demand Action, which advocates for gun safety legislation.

In response to mass shootings at schools, Republican lawmakers want to talk about everything but firearms, Hall said.

The House legislation voted on Wednesday would set up new federal offenses for gun trafficking and the use of straw buyers and put in place requirements on the home storage of firearms. It also would outlaw the selling, manufacturing and possession of large-capacity ammunition magazines with certain exceptions.

The school shooting in Uvalde came more than a week after 10 Black people were killed in a shooting at a Buffalo, N.Y., supermarket. The accused gunman in the massacre is a white man who posted documents shortly before the shooting that included his white supremacist views, according to the Associated Press.

In 2020, Arkansas had the 8th-highest firearm death rate among U.S. states, according to data from the Centers for Disease Control and Prevention. The rate includes homicides, suicides and other types of deaths.

Casey Burgat, director of the Legislative Affairs program at the Graduate School of Political Management at George Washington University, said gun policy is an issue of high importance for the Republican base and one that energizes those voters.

For Republican lawmakers, it's an issue that can make voters turnout for or against them, he said.

"It'll be the difference for enough people to be engaged or not," he said.

Along with political pressure from the base, the National Rifle Association wields a robust mobilization force, Burgat said.

All of Arkansas' congressional members have been backed by the NRA in the past.

NRA spent more than $1.9 million supporting Republican Tom Cotton's candidacy during the 2014 Senate campaign, according to the Federal Election Commission.

Cotton, of Little Rock, supports increasing penalties for felons who use a gun. He said the whole gun legislation package in the House is "not acceptable" to most Arkansans.

"The deterrent effect of longer sentences for using a gun in a crime is significant and demonstrated," the U.S. senator said in an interview Wednesday.

Cotton said the bipartisan group of senators do not have legislation but is debating a number of ideas. The junior senator from Arkansas said he thinks it will take a number of weeks before there is any legislation.

Ahead of the House vote, U.S. Sen. John Boozman of Rogers on Tuesday said there are good faith negotiations.

"I'd like to see some things that would actually make a difference and so we're working with Senator (John) Cornyn (of Texas) and his staff to try and understand better what's going on with the negotiations," he said, adding that he's not pushing for any specific policy.