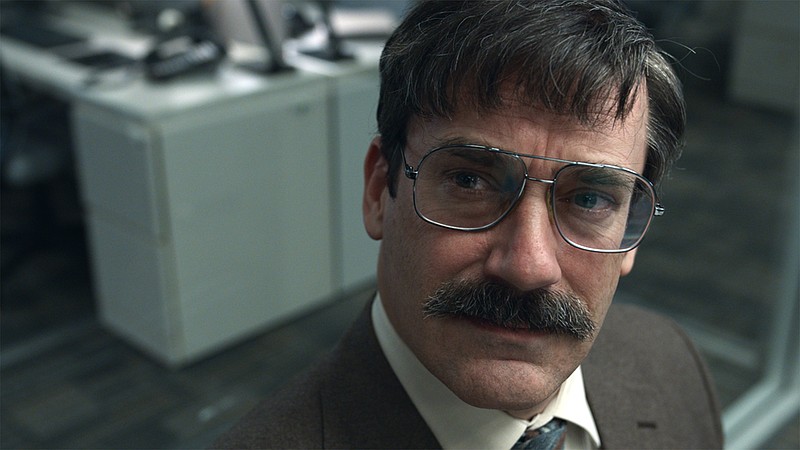 The moustache un-makes the man? Jon Hamm is Orson, a compulsive bureaucrat who takes refuge in a secret office he discovers in his workplace in Joachim Back’s Kafkaesque black comedy “Corner Office.”

In some ways, Tribeca, a film festival started in the immediate aftermath of 9/11 by Robert De Niro, among others, as a means of revitalizing downtown New York, was better posed to pivot to the radical, many-faceted, multimedia showcase model that many such "film" festivals now subscribe. With a dearth of big-name, glossy premieres to choose from, Tribeca programmers always embraced a creative approach to curation, bringing in smaller, indie narratives and docs, and focusing on the various ways such entertainments were being consumed in the 21st century.

Now, finally restored to a somewhat woozy, post-covid situation, Tribeca has so embraced its many winding threads -- including TV, Audio Storytelling, Games, Music, and something they call "Immersion" -- it technically doesn't even include the word "film" in its title. That's cool, and all, but we're really just here for the flicks. And by "here," we actually mean, "back in our living room in Philadelphia," as we -- sorry, I -- will be attending this year's affair via my own TV. I have mixed feelings about this state of affairs -- it has been three years since I've visited Gotham, which is about the longest I've gone since I went to college up in Westchester -- but what I will miss out on in pizza slices, superior bagels, and the warm camaraderie of my critic friends who live there, I will attempt to make up for with convenience, savings, and labradoodle cuddlings.

In any event, with a rush of material out there to choose from, here are some of the titles I'm most looking forward to this go-round.

"Corner Office": Proving again the adage that a bad mustache can make even the most handsome men hideous (if there isn't such an adage, there oughta be), Jon Hamm sports a rueful set of whiskers portraying an office drone so indoctrinated in his job, the greatest reward he can imagine is an office that signifies to him how much his sterling work is appreciated. Only, it seems, not everyone among his co-workers agrees with his self-assessment. Workplace satire feels pretty firmly established as a genre type by this point, but there's always room for more.

"Don't Make Me Go": John Cho has found a good niche for himself as a compassionate, caring father amid difficult circumstances (see also "Searching"). Here, in Hannah Marks' dramedy, he plays a man with a terminal illness who wants to spend as much loving time with his teenage daughter as possible in the days he has left. The two embark on a road trip from California to New Orleans, ostensibly so he can attend his high school reunion (while giving her driving lessons), but more specifically so he can reconnect his daughter with her mother, whom he hasn't seen in years after she left them. Could be maudlin, but Cho has a careful dignity to him, and I suspect he will be up to the challenge.

"The Drop": Oh, good, a cringe comedy! This one involves a married couple (Anna Konkle and Jermaine Fowler) trying to conceive a baby themselves, who travel to a friend's destination wedding on a tropical island, and promptly drop another guest's baby in front of nearly everyone attending. Recriminations, accusations, and embarrassing high jinks ensue, in a film whose setup sounds like a Ruben Ostlund affair.

"The Integrity of Joseph Chambers": I was an enormous fan of Robert Machoian's previous indie film, "The Killing of Two Lovers," and its leading man, Clayne Crawford, so much so that with the pair's latest outing, about a man who decides spontaneously to go on a solo hunting trip, I will shelve my inherent unease with the premise. It helps to find out things go quite hauntingly wrong for the would-be hunter, and with Machoian behind the lens, we can expect an atmospheric odyssey.

"Lynch/Oz": A documentarian for cinephiles, Alexandre O. Philippe's films take an academic air as they explore the inner workings of classic films (see "78/52," concerning the shower scene in "Psycho"). For this one, he delves into director David Lynch's well-established adoration of "The Wizard of Oz," making the case that Lynch's entire oeuvre stems from the story of Dorothy attempting to get back home. Along the way, he interviews many other filmmakers and critics, honing in on his thesis. For Lynch fans, it's a must see.

"Subject": In an era of endless streaming possibilities, in which documentary films have come to fill a huge content niche, Jennifer Tiexiera and Camilla Hall's doc, about what happens to a film's subjects in the aftermath of appearing in one, seems particularly prescient. They revisit the subjects of famous docs such as "Hoop Dreams," "The Staircase" and "Capturing the Friedmans," to find out how those films changed the lives of the participants. It's a necessary addendum to the documentary experience, and should shed interesting light on the ways such films have helped -- or hindered -- their subjects.

"Taurus" aka "Good News": Your interest in this one might well depend on your interest in Colson Baker, better known as Machine Gun Kelly, as the rapper -- and infamous Megan Fox partner -- takes center stage in this fictionalized drama about a whacked out musician, lost to a sea of drugs, booze and hedonism, tasked with creating one more hit before he completely loses himself to his addictions. True, it doesn't sound like it's breaking any new ground, exactly, but Baker's involvement is intriguing, and writer/director Tim Sutton has fashioned a career out of such dark, brutal stories.

"There There": Andrew Bujalski's filmography is a fascinating case study in artistic fulfillment. After pioneering what became known as the "Mumblecore" movement in the early aughts, Bujalski has moved on to slightly bigger projects -- "Computer Chess," "Support the Girls" -- that have met increasing critical and mass approval. His latest effort involves a series of vignettes (starring such luminaries as Jason Schwartzman and Lili Taylor), designed to reflect everyday life through a riotous lens. He has hits and misses on his resume, but Bujalski's films are never dull.

"Vengeance": Such is the powerful branding from re-watching episodes of "The Office," it can be difficult to see B.J. Novak's face anywhere and not instantly think of Ryan, the once-intern, later-drugged up mid-manager he played on the seminal show. Be that as it may, we have arrived at his directorial debut, about a NYC podcaster (Novak), who heads down to Texas to investigate the death of a young woman he may have had a relationship with some time ago. His investigation is a search for truth, to be sure, but it might also be a way for him to delve into the sort of true crime narrative that has become all the rage in the podcasting field. Novak did plenty of writing on "The Office," so he's in good standing there. It should be interesting to see him play a character, one supposes, far removed from Michael Scott's erstwhile "best friend." 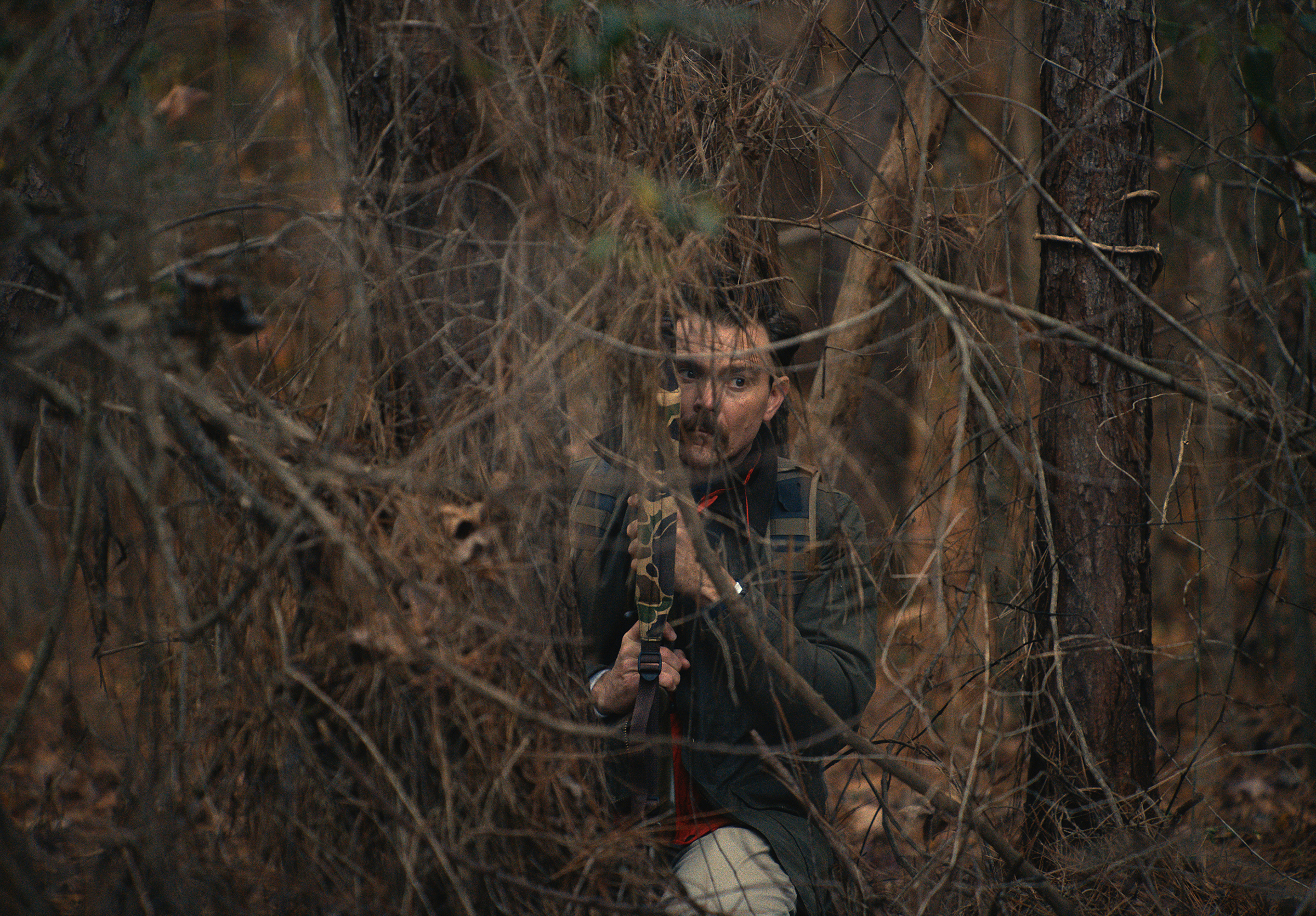 The deer hunter: Actor Clayne Crawford plays an insurance executive who decides to go off on a solo hunting trip in “The Integrity of Joseph Chambers,” a film that reunites Crawford with writer-director Robert Machoian (“The Killing of Two Lovers”).