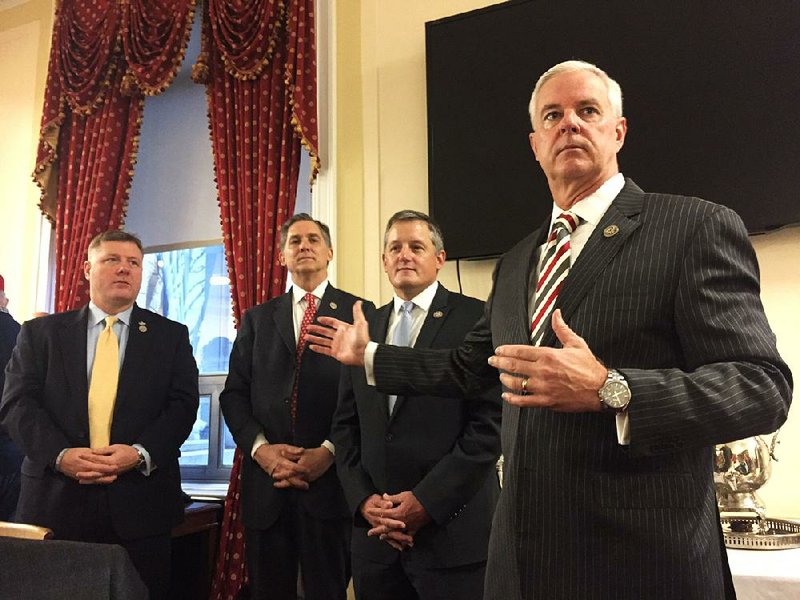 WASHINGTON -- Democrats passed "red flag" firearm legislation in the U.S. House on Thursday without the help of Arkansas Republicans.

The four House members from Arkansas voted against the bill, which allows a court to temporarily ban a person from possessing or buying a firearm if they are believed to pose a risk to themselves or others.

If enacted, police, family and household members would be able to ask a court for an order temporarily prohibiting a person from purchasing or possessing firearms. Anyone requesting an order would have to submit a signed affidavit explaining why they think a person poses a risk.

Supporters of "red flag" laws say the legislation has the ability to stop mass shootings and gun suicides.

The push for tougher gun legislation comes in the aftermath of the elementary school shooting in Uvalde, Texas, which left 19 students and two teachers dead.

"I don't think we solve our problems with firearms by attacking law-abiding citizens. This has the potential to do that," he said on Thursday.

Thursday's measure, which passed the House by a 224-202 vote, is not likely to clear the Senate. Five House Republicans voted for the bill while one Democrat voted against it.

A bipartisan group of senators have been in talks on how to respond to the shooting in Texas.

The Congressional Budget Office has estimated that approximately 10,000 petitions would come on a yearly basis under the bill.

U.S. Rep. Lucy McBath, the sponsor of the legislation, said during debate Thursday that her bill would empower loved ones and law enforcement "to help prevent mass shootings before they happen."

"Every family in every community in our nation deserves access to these life-saving measures. No child, no parent deserves to live in fear of gun violence," said McBath, a Georgia Democrat, during a speech on the House floor. "And we are paying for it. We're paying for this gun violence every single day. Day after day. Hour after hour."

U.S. Rep. Mike Johnson, a Louisiana Republican, spoke out against the bill during a speech on the House floor, saying it would allow courts to take firearms away from people without notice.

U.S. Rep. Steve Womack of Rogers on Thursday declined to comment to the Democrat-Gazette on why he voted against the "red flag" legislation.

U.S. Rep. French Hill and U.S. Rep. Bruce Westerman were not available for an interview on Thursday.

However, Westerman released a statement after the vote saying the bill "was an outright violation of Americans' due process right, which is a core tenet of our Constitution."

In a statement on Wednesday, Hill of Little Rock said he did not support the "red flag" measure because "it infringes upon an individual's due process and Second Amendment rights."

Arkansas gun safety advocates chided the state's U.S. House delegation for not voting for the bill.

"By refusing to cross this line and come over to the side of reason, they are going to get more children killed and the blood will be on their hands," said Kate Fletcher, a longtime volunteer with the Arkansas chapter of Moms Demand Action, which advocates for gun safety legislation.

Thursday's vote came one day after Arkansas' House delegation also voted against raising the purchasing age for semi-automatic weapons from 18 years old to 21 years old. They also voted against outlawing the selling, manufacturing and possession of large-capacity ammunition magazines with certain exceptions. The legislation passed the House in a near party-line vote.

"It is baffling to me that our elected officials have decided to just absolutely ignore their constituents when we are screaming for them to do something to protect our communities," Fletcher said.

"People around them know that that person is unstable. And yet time and again, they're able to go purchase a gun," she said.

As for Thursday's vote from the House delegation, she said they "vote the way of the gun lobby."

Nineteen states, not including Arkansas, have adopted "red flag" legislation, according to Everytown for Gun Safety, a gun safety advocacy organization.

In 2019, so-called red flag legislation before the Arkansas Legislature failed in committee. There was not a major push for similar legislation during the 2021 legislative session, advocates said.

Advocates for tougher gun laws also say "red flag" laws can cut off gun access to a person in crisis, preventing them from harming themselves.

In 2020, Arkansas had the 8th-highest firearm death rate among U.S. states, according to data from the Centers for Disease Control and Prevention. The rate includes homicides, suicides and other types of deaths.

Womack, in a statement issued Wednesday after voting against the measure to raise the age for buying semi-automatic weapons, said the "focus needs to be on hardening schools, supporting mental health, expanding information sharing, and proactively identifying and halting threats."

"Wish we could focus on what would actually make school safer for children instead of attacking the Second Amendment, which Democrats have obviously taken this opportunity to do that," Westerman said during an interview Wednesday on efforts to strengthen gun laws.