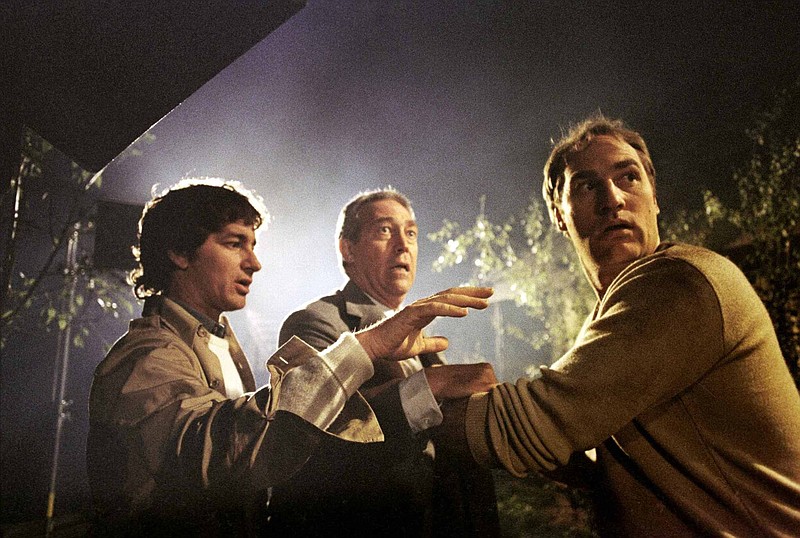 Producer Steven Spielberg is absolutely not usurping the role of director Tobe Hooper as he talks to actors James Karen and Craig T. Nelson on the set of “Poltergeist” (1982).

Forty years years ago this month, the acclaimed director of such hits as "Jaws," "Close Encounters of the Third Kind" and "Raiders of the Lost Ark" released two big movies one week apart. "Poltergeist" hit theaters June 4, 1982, and "E.T. the Extra-Terrestrial" followed close behind on June 11. Both films were critical and box office successes and further cemented Steven Spielberg as the king of the Hollywood blockbuster.

"Poltergeist" ended up being the highest grossing horror film of 1982 and the year's eighth-highest grossing movie overall. It also earned three Academy Award nominations (Original Score, Sound Effects Editing, Visual Effects), losing all of them to "E.T." A global phenomenon, "E.T." became the highest grossing film of all-time (toppling "Star Wars"), a distinction it held for eleven years until another Spielberg film, "Jurassic Park" took the honor. "E.T." left a major mark, earning nine Oscar nominations of its own, including one for Best Picture.

Obviously we live in a cinema age where the box office is still driven by big blockbusters. We just had "Top Gun: Maverick" and "Jurassic World: Dominion" open today. The lucrative cash cow that is the Marvel Cinematic Universe has already released one superhero movie in 2022 and has two more slated before year's end. So we're pretty accustomed to a steady diet of $200 million tent-pole extravaganzas.

But in 1982 it was a pretty big deal, especially coming from a filmmaker of Spielberg's caliber. Back then more people held the big screen experience in high regard, and trips to the movie theater really meant something for many of us. In addition to the immersive and communal qualities of watching a movie in a dark room with a group of total strangers, theaters provided our only access to new films. There was no internet, meaning there were no streaming services. And the video rental boom was near but it hadn't fully bloomed yet. So we went to the theater. It was special.

I still recall seeing "E.T." three times at the Flick Twin Cinema in Pine Bluff. Even though I was only 11 years old, I remember that theater well -- the welcoming smell of popcorn as you entered the front door, the big wide-open lobby, the gaudy Greek theater masks on the carpeting. But what I remember most are the many movies I would see there during my childhood. It's where I had seen one of my all-time favorites, "Raiders of the Lost Ark" the year before. But in June of 1982, Spielberg released two dramatically different movies, both of which had audiences buzzing.

"Poltergeist" is considered a Steven Spielberg film although the level of his involvement has been debated for decades. Spielberg conceived the story, co-wrote the script, and co-produced. But he was already at work making "E.T." and a clause in his contract forbid him from directing another film while still in production. So Tobe Hooper ("The Texas Chainsaw Massacre") was brought on to direct. Accounts vary on who had creative control with some going as far as proclaiming Spielberg as co-director. Co-producer Frank Marshall insisted Spielberg was "the creative force of the movie" while in 2012 interviews several cast and crew members credited Hooper.

Controversy aside, "Poltergeist" has Spielberg's fingerprints all over it. It's perhaps best known for a chillingly calm 5-year-old Heather O'Rourke standing in front of a snowy television screen uttering the words "They're heeeere." But watching it again I was reminded of its many strengths that go beyond its fun but somewhat dated special effects. There's the mischievous jolt it gave to the old-fashioned ghost story. There's its hefty focus on developing a genuine and relatable family. There's the terrific Zelda Rubinstein as an eccentric clairvoyant who brings a wonderful energy and kookiness to the film's second half.

"Poltergeist" was well received by audiences at the time and has won over numerous skeptics in the decades that have followed. Generally speaking, critics also liked it although there were a few notable exceptions (Pauline Kael notoriously dismissed it as a "dumb concoction" and "entertaining hash"). And while it made good money, its box office numbers could have been even higher if not for the movie that came just one week later.

"E.T. the Extra-Terrestrial" was conceived, directed and co-produced by Spielberg, and its creative control was never in question. Despite claims he had plagiarized the film from an unproduced script by Indian filmmaker Satyajit Ray, Spielberg maintained that "E.T." was inspired by the childhood imaginary friend he invented following his parents' divorce. Whichever is true, "E.T." was an instant hit. Including its two ­re-releases, the film has grossed just under $800 million.

Its massive popularity led to "E.T." becoming a merchandising goldmine. Plush toys, storybooks, breakfast cereal, lunchboxes -- the film generated over $1 billion in merchandising alone. Yet one reason "E.T." remains one of Spielberg's most beloved movies is that it wasn't made just for kids. He gave ­audiences more than a suburban fairy tale about a young boy who befriends a homesick alien. He gave them a touching portrait of youth that kids of all ages could relate to.

As "Poltergeist" and "E.T." turn 40-years-old, I can't help but look back at June 1982 with a particular sense of longing. Don't get me wrong, I still enjoy many of today's blockbusters, and I can get caught up in the near rabid excitement that surrounds certain high-profile releases. But this is a more homogenized era where blockbusters more often than not revolve around sequels and franchise-building. That's why it's easy to reflect on "The Spielberg Summer" with such fondness. It reminds me of a time when big summer movies and our first experiences with them were truly memorable. But then again, maybe I'm just old. 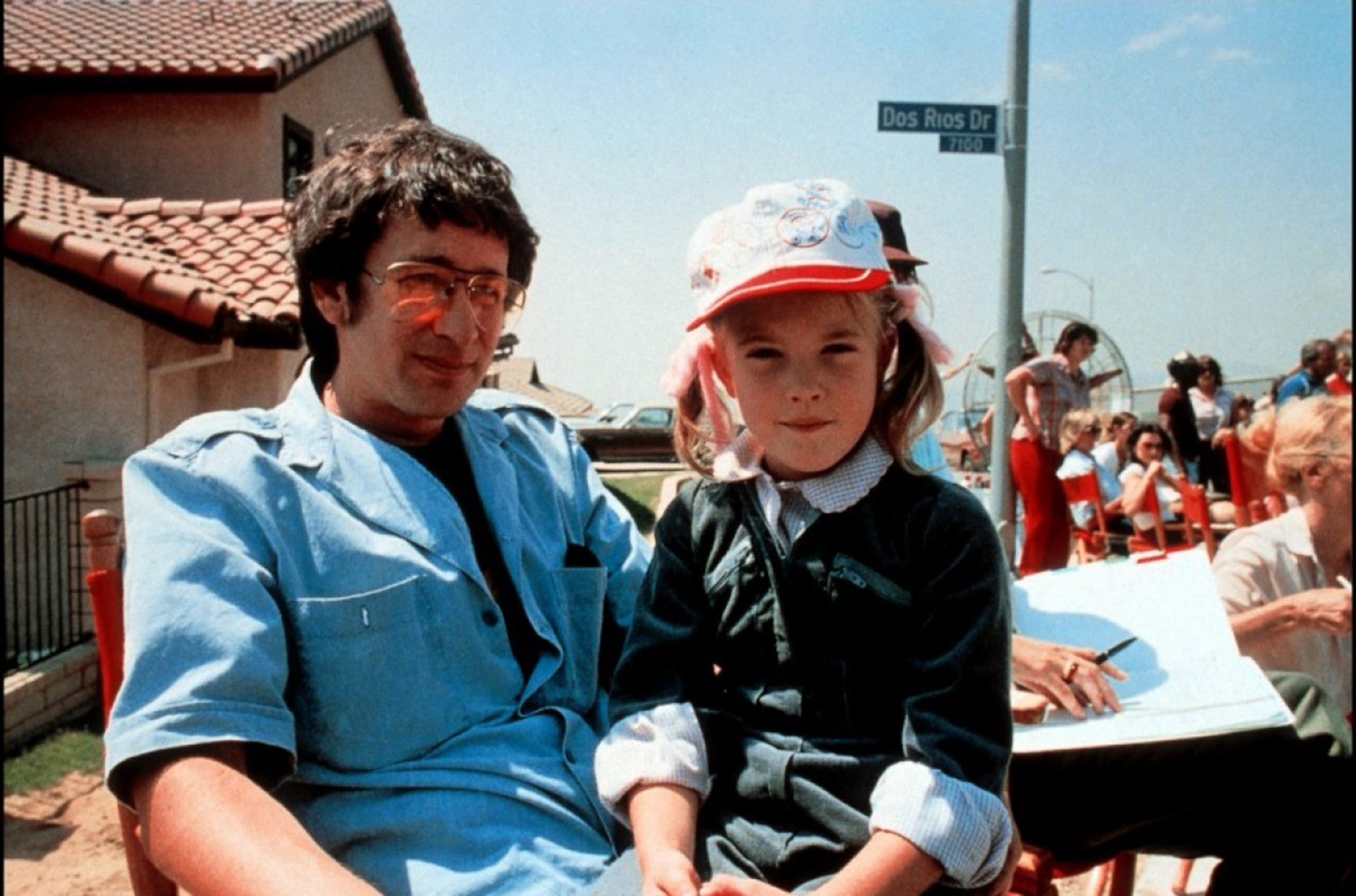 Director Steven Spielberg relaxes with a young Drew Barrymore on the set of “E.T.: The Extra-Terrestrial,” which was originally released 40 years ago.