Costs of gasoline, groceries soar in May from year ago by Compiled by Democrat-Gazette Staff From Wire Reports | June 11, 2022 at 10:12 a.m. 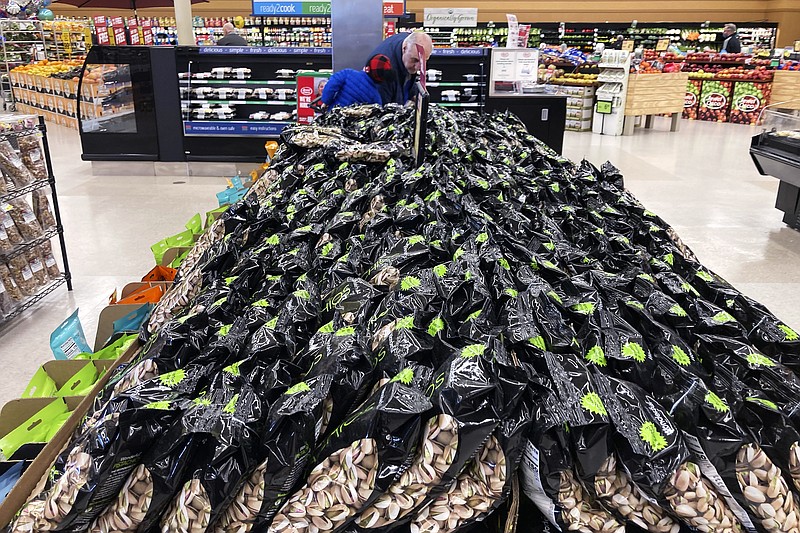 WASHINGTON -- The prices of gasoline, food and most other goods and services jumped in May, raising inflation to a four-decade high and giving American households no respite from rising costs.

Compared with a year ago, consumer prices were up 8.6% last month, faster than April's year-over-year increase of 8.3%, the Labor Department said Friday. The new inflation figure, the highest since 1981, will heighten pressure on the Federal Reserve to continue raising interest rates aggressively.

"Inflation remains unrelenting -- consumers continue to get hit from all sides," said Sarah Watt House, a senior economist at Wells Fargo. "There is very little inflation relief in sight."

On a month-to-month basis, prices jumped 1% from April to May, much faster than the 0.3% increase from March to April. Contributing to that surge were much higher prices for everything from airline tickets to restaurant meals to new and used cars. Those price spikes also elevated so-called core inflation, a measure that excludes volatile food and energy prices. In May, core prices jumped a sharp 0.6% for a second straight month. They're now 6% above where they were a year ago.

Friday's report underscored fears that inflation is spreading well beyond energy and goods whose prices are being driven up by clogged supply chains and Russia's invasion of Ukraine.

Evidence of rising prices sent stocks tumbling. The S&P 500 fell 2.9%, closing out the second worst week this year and the ninth weekly drop in the past 10, as fears mounted that efforts to combat inflation risk stifling growth. The Dow Jones Industrial Average fell 2.7%.

The increased pressure on the Fed to raises rates even faster -- which means higher-cost loans for consumers and businesses -- will raise the risk of a recession, too.

"Virtually every sector has higher-than-normal inflation," said Ethan Harris, head of global economic research at Bank of America. "It's made its way into every nook and cranny of the economy. That's the thing that makes it concerning, because it means it's likely to persist."

Gasoline prices rose 4% just in May and have soared nearly 50% in one year. The national average price at the pump reached $4.99 a gallon on Friday, according to AAA, edging closer to an inflation-adjusted record high of $5.40. In Arkansas, the average price on Friday was $4.51 a gallon, up from $3.96 a month ago and $2.77 a year ago.

The cost of groceries surged nearly 12% last month from a year earlier, the biggest such increase since 1979. Rising prices for grain and fertilizer, in the wake of Russia's war against Ukraine, are intensifying that increase. Restaurant prices jumped 7.4% in the past year, the largest 12-month gain since 1981, reflecting higher costs for food and workers.

Employers face immense pressure to raise pay in a job market that remains robust, with low unemployment, few layoffs and near-record job openings. But while average wages are rising at their fastest pace in decades, they aren't increasing fast enough for most workers to keep pace with inflation. Many households accumulated savings from government stimulus aid during the pandemic and are now having to draw on those savings to pay bills.

Rampant inflation is imposing severe pressures on families. Lower-income and Black and Hispanic Americans, in particular, are struggling because, on average, a larger proportion of their income is consumed by necessities.

In light of Friday's inflation reading, the Fed is seen as likely to implement the fastest series of interest rate increases in three decades. By sharply raising borrowing costs, the Fed hopes to cool spending and growth enough to curb inflation without tipping the economy into a recession.

The Fed has signaled that it will raise its key short-term rate by a half-point -- double the size of the usual increase -- next week and again in July. Some investors had hoped the Fed would then slow its rate increases to a quarter-point increase when it meets in September or perhaps even pause its credit tightening. But with inflation raging hot, investors now foresee yet another half-point rise in September, which would be the fourth since April.

Talk of an even larger move by the Fed entered the conversation Friday with investors increasing bets on a 75 basis-point increase.

"We think the U.S. central bank now has good reason to surprise markets by hiking more aggressively than expected in June," economists at Barclays wrote after the inflation report's release.

"Even in these fast-moving times, the Fed is likely to be reluctant to surprise markets, which keeps the chance of a 75 basis-point surprise at next week's meeting small," said Sarah House, senior economist at Wells Fargo & Co. "However, we could see Chair Powell at the post-meeting press conference more clearly signal that 75 basis-point hikes are on the table for future meetings if we don't see a let-up in inflation."

Surveys show that Americans see high inflation as the nation's top problem, and most disapprove of President Joe Biden's handling of the economy. Congressional Republicans are hammering Democrats on the issue in the run-up to midterm elections this fall.

On Friday, Biden responded to the latest figures in a speech at the Port of Los Angeles, which is now moving a record amount of cargo under an agreement the White House has shepherded. Yet even as the number of ships waiting to unload at the port has dropped sharply, inflation has not.

"My administration," the president said, "is going to continue to do everything we can to lower the prices to the American people."

The president on Friday also blamed corporate profits for inflation, saying that some companies -- including shipping firms and the oil industry -- are focused on maximizing profits. Biden specifically targeted Exxon Mobil for not doing more to increase oil production.

"Exxon made more money than God this year," he said.

Exxon Mobil responded to Biden's comment by saying that it is producing more oil.

"We have been in regular contact with the administration, informing them of our planned investments to increase production and expand refining capacity in the United States," Casey Norton, a spokesperson for the company, said in an email. "We increased production in the Permian Basin by 70%, or 190,000 barrels per day, between 2019 and 2021. We expect to increase production from the Permian by another 25% this year."

A report from the World Bank this week made clear that high inflation is a global problem that threatens to slow economies around the world. For the 19 countries that use the euro currency, inflation fueled by rising food and fuel prices hit a record 8.1% last month, leading the European Central Bank to announce that it will raise interest rates for the first time in 11 years, starting in July and again in September.

In the coming months, prices in the United States may ease somewhat. Some large retailers, including Target, Walmart and Macy's, are now stuck with too much of the patio furniture, electronics and other goods that suddenly are no longer in demand. Target said it's cutting prices because of mounds of unsold inventory.

Though Americans have soured on the economy, they have largely kept up their spending. They are increasingly turning to credit cards, with total card debt rising sharply in April, the Fed reported, though such debt has only barely surpassed pre-pandemic levels.

How long these trends -- higher wages, extra savings and rising card debt -- enable Americans to keep spending will help determine whether a recession can be avoided. To cool inflation, spending growth must be slowed.

For lower-income Americans, there are signs it's already slowing. Walmart said customers are shifting to cheaper items, while sales are picking up at retailers that cater to budget-conscious shoppers, like dollar stores.

Research by the Bank of America Institute, which uses anonymous data from millions of their customers' credit and debit card accounts, shows gasoline eating up a larger share of budgets.

For lower-income households -- defined as those with incomes below $50,000 -- spending on gas reached nearly 10% of all spending on credit and debit cards in the last week of May, the institute said. That's up from about 7.5% in February, a steep increase in such a short period.

Many small businesses are still struggling to keep up with rising costs for supplies and labor, a sign that price increases will continue. Andrew McDowell, founder of With Love Market & Cafe in Los Angeles, said he's paying more for food supplies, workers and reusable bags, which used to cost him 23 cents but now cost 45 cents.

The company's chicken BLT now costs 20% more than it did before the pandemic. McDowell said he's grappling with the highest prices for supplies and workers he's ever faced. He thinks he may have to rise prices again, by 10% to 20%.

"Every product is impacted, every aspect of the business is affected," McDowell said.

Information for this article was contributed by Christopher Rugaber, Chris Megerian and Josh Boak of The Associated Press; by Steve Matthews of Bloomberg News (TNS); and by Jeanna Smialek of The New York Times. 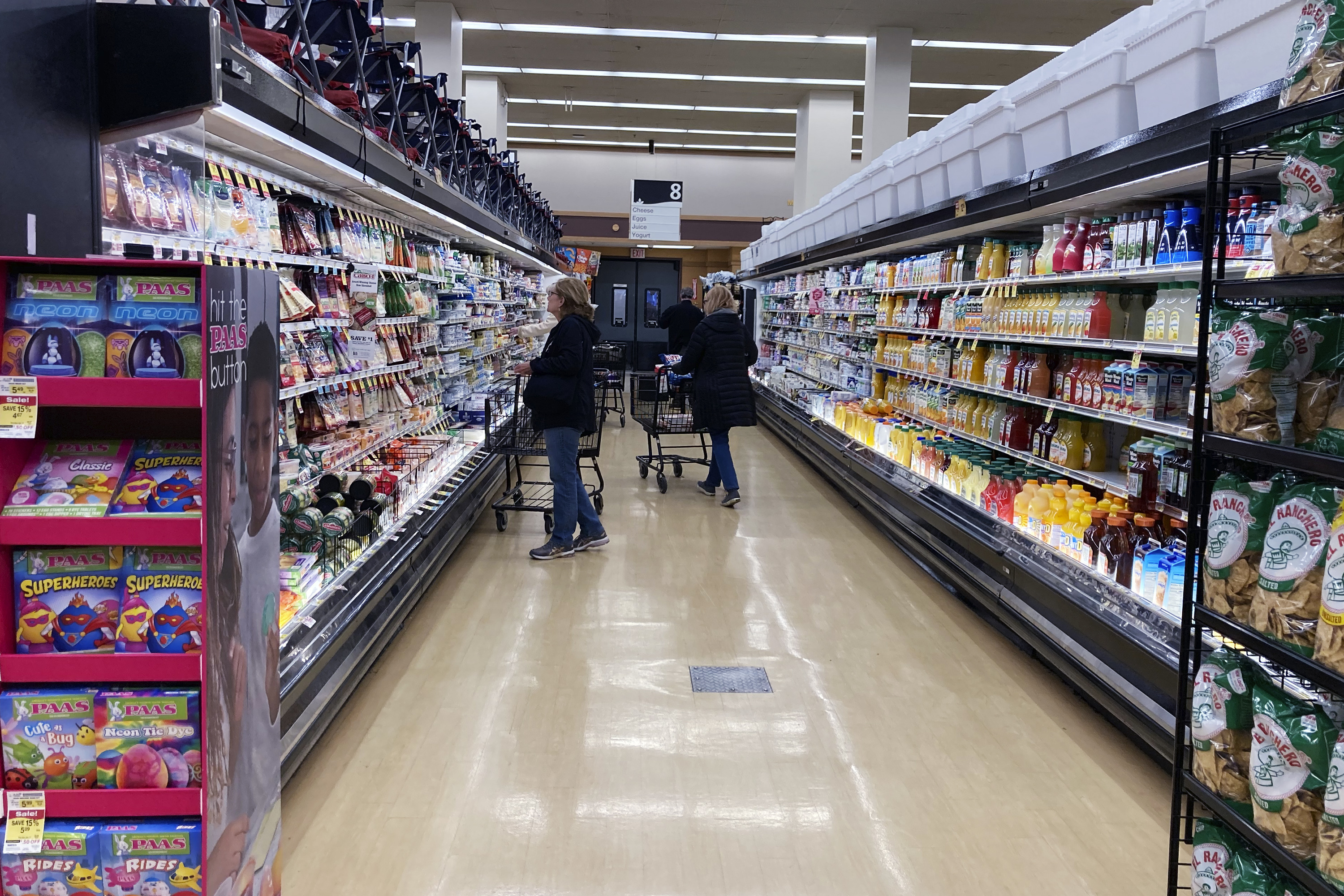 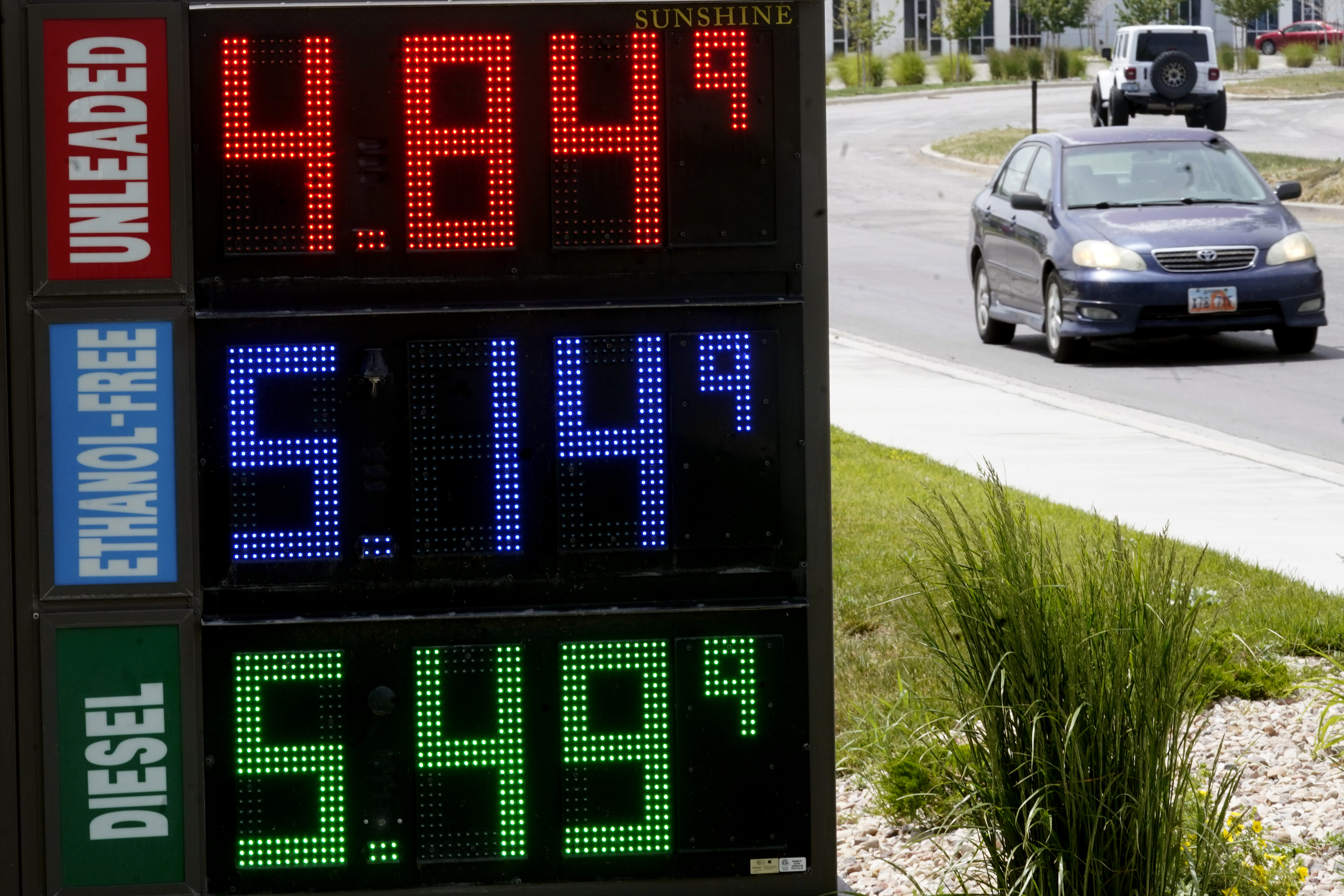 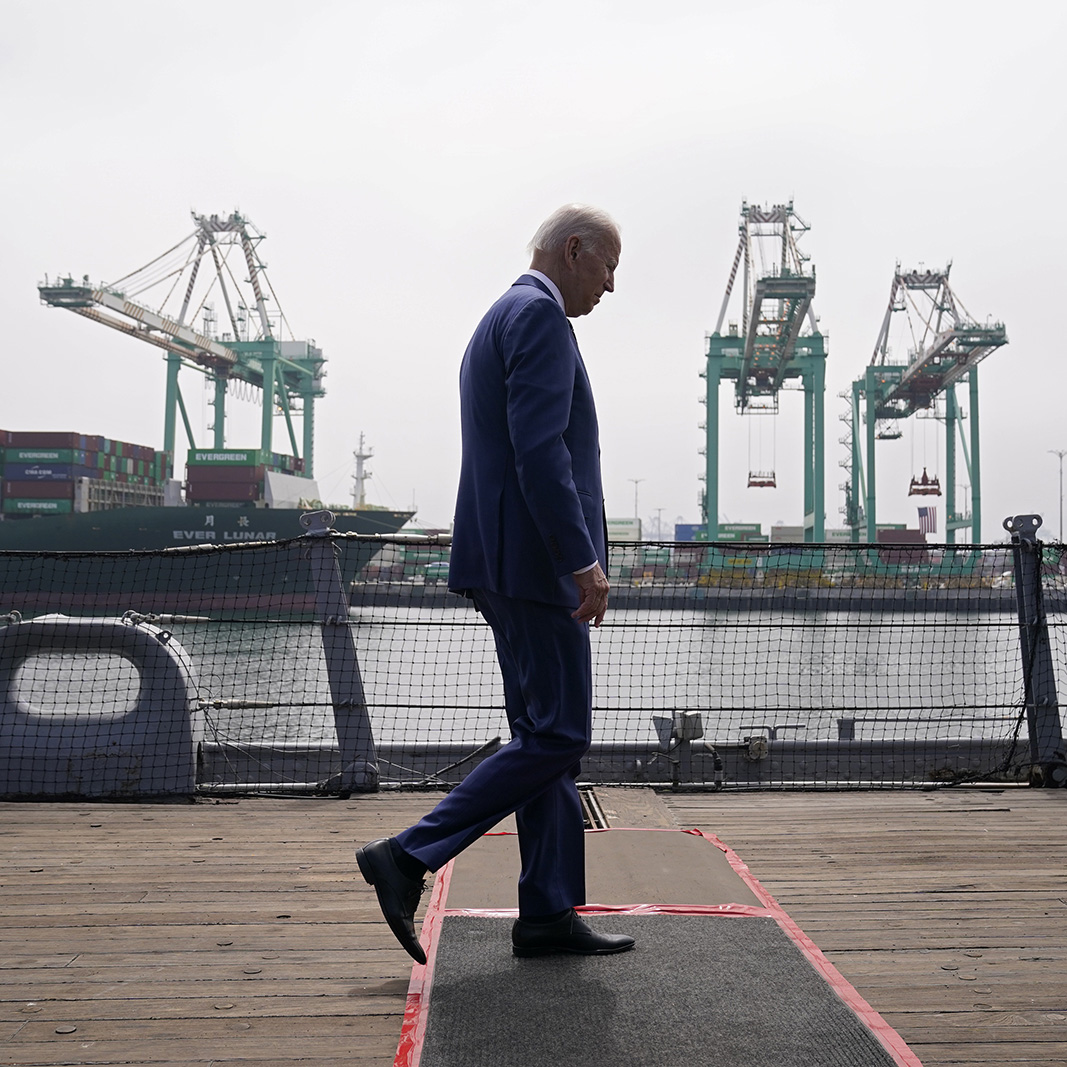 President Joe Biden walks across the deck of the battleship USS Iowa on Friday at the Port of Los Angeles after speaking about inflation and supply chain issues and lashing out at firms for maximizing profits. While the backlog of ships waiting to be unloaded at the port has dropped, prices continue to rise. (AP/Evan Vucci)