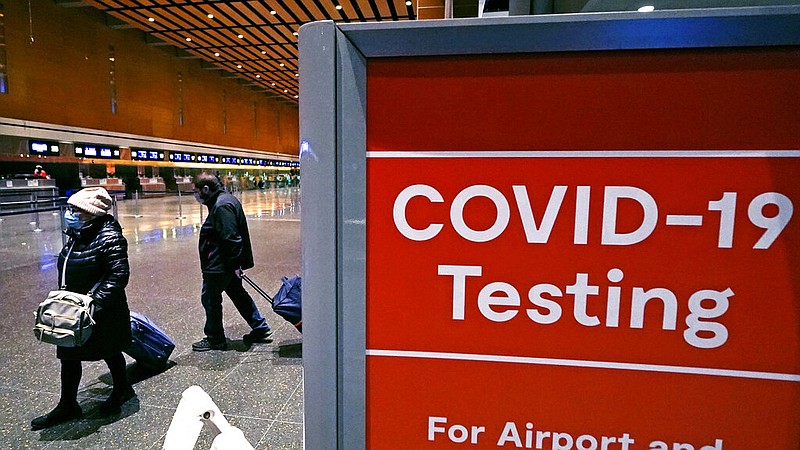 Travelers pass a sign near a covid-19 testing site in Terminal E at Logan Airport in Boston in this Dec. 21, 2021 file photo. The Biden administration is lifting its requirement that international air travelers to the U.S. take a covid-19 test within a day before boarding their flights, easing one of the last remaining government mandates meant to contain the spread of the coronavirus. (AP/Charles Krupa)

International travelers will no longer need to show proof of a negative coronavirus test before boarding flights to the United States, a senior Biden administration official said Friday, ending one of the nation's last pandemic-related travel requirements.

On Friday, the official, speaking on the condition of anonymity, said the administration decided to lift the requirement Sunday at 12:01 a.m., after Centers for Disease Control and Prevention officials determined that the widespread adoption of vaccines and treatments for covid-19 no longer make it necessary.

American travelers had held off on overseas vacation plans because of the mandate, worried that they would be stuck in foreign countries if they discovered they were infected and would be forced to pay thousands of dollars in hotel fees and other expenses, said Marc Casto, chair of the board of the American Society of Travel Advisors, a trade group.

Conversely, international travelers to the United States faced the uncertainty of testing positive before their trips began. Travelers who are not U.S. citizens, U.S. nationals, lawful permanent residents or traveling to the United States on an immigrant visa must still show proof of vaccination before boarding their flight.

The decision was met with joy in the travel industry, which for months has been lobbying the administration hard to get rid of the testing rule.

The hard-hit travel industry is already in the middle of a comeback, but Casto said he believed dropping the mandate would lead to double-digit percentage increases in the number of people flying and staying in hotels abroad.

The U.S. Travel Association, a trade group, projects that dropping the testing requirement will bring 5.4 million additional international visitors to the United States and $9 billion in additional travel spending through the end of the year.

"Today marks another huge step forward for the recovery of inbound air travel and the return of international travel to the United States," said Roger Dow, chief executive of the U.S. Travel Association. "The Biden administration is to be commended for this action, which will welcome back visitors from around the world and accelerate the recovery of the U.S. travel industry."

The testing requirement was first introduced in January 2021, when fewer than 10% of Americans were vaccinated and new infections were reaching record levels.

In December 2021, amid heightened concerns about the omicron variant, the CDC tightened the rule by requiring that travelers present a negative test taken within 24 hours of departure. Previously, a test taken within three days was required.

The administration's mask mandate, which required all passengers on planes and other forms of public transport to wear masks, was struck down in April by a federal judge appointed by former President Donald Trump.

The testing requirement was also unpopular with many travelers, who faced the prospect of getting stuck overseas after testing positive.

The CDC recommends travelers isolate and delay travel for 10 days regardless of symptoms or a negative test taken within the isolation period. Some people who did not want to wait that long used a "backdoor" route, returning home via land borders with Canada and Mexico, which do not require a coronavirus test.

For President Joe Biden, the decision to drop the requirement is welcome news at a time that the administration is struggling on a series of fronts. White House officials described the decision as a validation of the president's efforts to aggressively combat the virus.

New confirmed cases in the United States have been roughly flat at around 110,000 a day on average as of Thursday over the past two weeks, according to a New York Times database, after rising from lower than 30,000 a few months ago.

Infections, though, are thought to be widely undercounted, as at-home test results are often not officially reported and many people with no or mild symptoms may not test at all. Death counts have been volatile in recent weeks but remain below 400 per day on average.

Health experts said the end of the testing requirement -- combined with the lifting of other pandemic-related travel mandates -- signals a new phase in which individuals will increasingly have to make their own determinations about safety.

The CDC decision was important and overdue, said Dr. Luciana Borio, a former acting chief scientist at the Food and Drug Administration who also oversaw public health preparedness for the National Security Council. She said federal scientists had to continue considering the goals of the pandemic response and how effective certain interventions are. Most transmission, she said, was occurring domestically.

"If the idea is to minimize the number of covid cases in this country, the impact of entrance screening is negligible," she said. "We are at a point where we have the tools to minimize morbidity and mortality associated with the virus. We should be focusing on the measures most effective."

The rule, she added, also "disproportionately impacts people who can't afford to be stuck in an international country."

But the decision provoked criticism and alarm from other corners of the public health field.

Meegan Zikus, a bioethicist at Grand Valley State University in Michigan who is immunocompromised, said lifting the mandate "completely disregards the safety and well-being of people who are at high risk."

"Lifting covid testing for international travel entirely negates that there remains a worldwide pandemic," she said. "The world is exhausted by the pandemic. Trying to pretend that it is over is destructive, ignorant and hurts those least able to protect themselves."

But William Hanage, a public health researcher at the Harvard T.H. Chan School of Public Health, said that while the change could lead to some new infections in the United States, it would have a considerably smaller effect than other policy decisions, such as lifting mask mandates.

"Travel restrictions make sense when there is a big difference between prevalence and risk when you're going between points A and B. If there isn't a big difference, then they are not particularly valuable," he said. "In many parts of the world, there is now less infection than in the U.S., and you are vastly more likely to be infected in a bar in New York City or elsewhere than you are in most random places overseas."

The Biden administration official said the CDC will reevaluate the decision in 90 days and added that the requirement for predeparture testing could be reinstated if there are new concerns about another variant.

The official said the agency would continue to recommend testing for travel.

Some American travelers currently on trips abroad breathed a sigh of relief Friday.

Lucia Torres, 39, who is booked to fly home to Florida from Spain on Tuesday with her husband, said she canceled some activities planned for the last days of her vacation because she was worried she would test positive before her flight home. She and her husband are vaccinated and boosted.

"When we booked our vacation we decided to take the risk, but we haven't been able to completely relax because it's always in our heads," she said. "Now we don't have to worry; I can book a massage, go to a party, do whatever people do on vacation."

The end of the requirement will reduce costs for some travelers since they no longer must pay for testing.

Elaine Sosnowski of Arizona said she and her family are scheduled to fly back to the United States as the order takes effect on Sunday. They have been in Italy for two weeks on a trip originally scheduled to take place in 2020.

"We are currently scheduled to get preflight tests in about 11 hours at a cost of about $300 and a fair amount of inconvenience," she said in an email. "It would be great to avoid this cost and avoid the hassle of getting everyone in for a test."

The announcement was so fresh on Friday, she said, that neither the U.S. Embassy in Rome nor the airline through which she booked the tickets, Delta Air Lines, could confirm the policy had changed.

"Such is the life of international travel," she wrote. "All in all still worth it, but fingers crossed this requirement will be lifted before incurring this expense."

David Freedman, president-elect of the American Society of Tropical Medicine and Hygiene and professor emeritus of infectious diseases at the University of Alabama at Birmingham, said the strategy behind testing and masking was always to slow the spread of the virus.

"You're never going to keep it out, no matter what you do," he said. "But if we are able to delay its introduction in a way that's widespread until we get better vaccines, that helps," he said.

Freedman said it is difficult to determine what effect the reduced pandemic-related travel measures will have on the number of infections. As the nation moves into a new phase, he said, he hopes people will continue to be cautious while keeping in mind that the virus still poses risks.

Information for this article was contributed by Michael D. Shear, Ceylan Yeginsu and Maria Cramer of The New York Times and by Lori Aratani and Tyler Pager of The Washington Post.