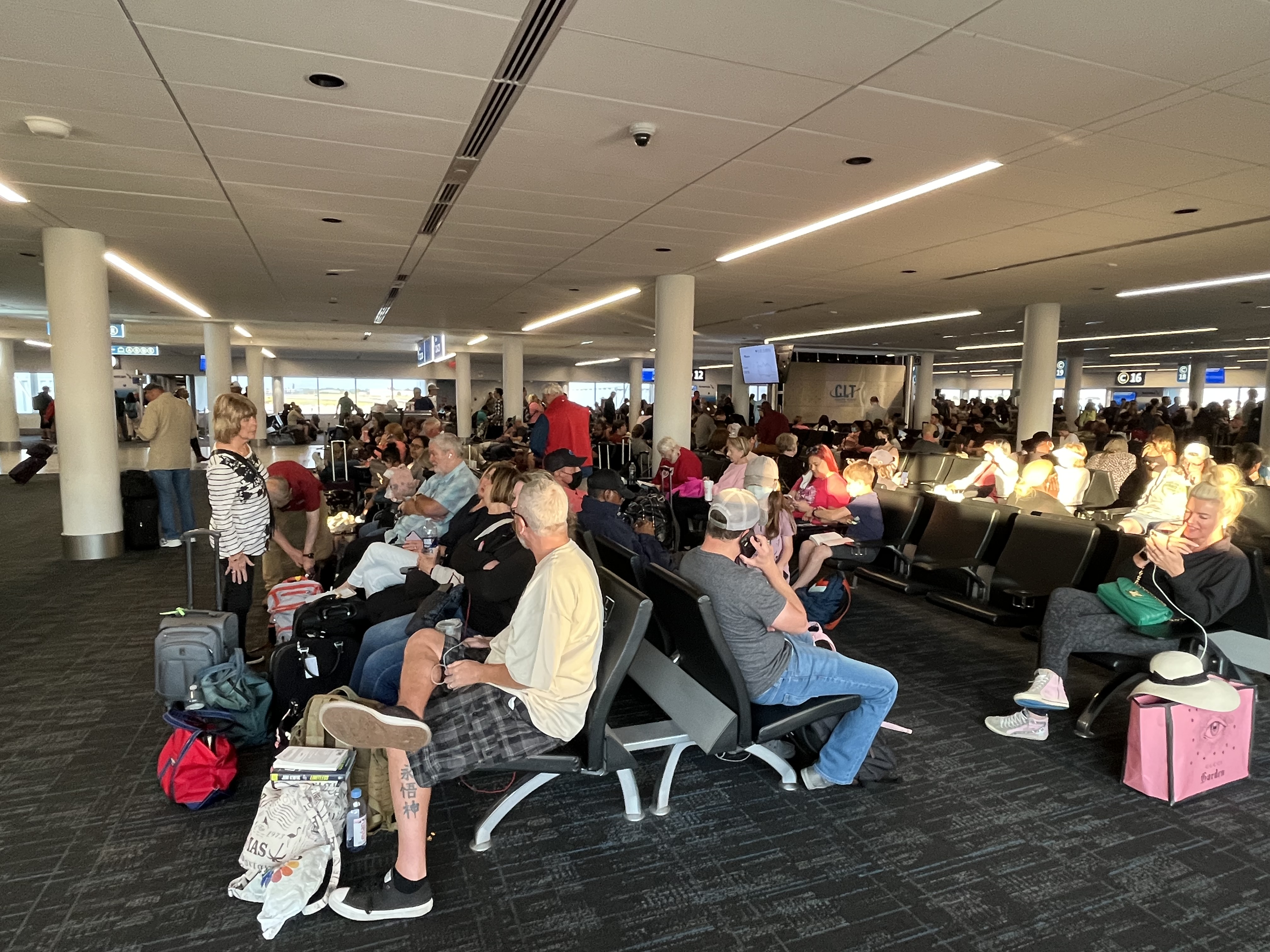 On the way up to Maine, an early (7 am departure) had us at the airport at 5 a.m. with some leaving their homes as early as 1:30 a.m. (we have travelers from all over the state on our trips).  We had a slight delay which cut our connection in Charlotte short (44 minutes).  We landed at the farthest end of A terminal and departed at the farthest end of E terminal--a 35-minute jog.  We all made it and we smugly rolled into Maine on a high.  Two of our other travelers who did their own air were not as lucky and ended up arriving in Bar Harbor at 1 a.m.  We were happy that wasn't us. . .

Fast forward to Friday.  Our scheduled departure of 4 pm from Portland kept getting delayed, delayed and delayed. 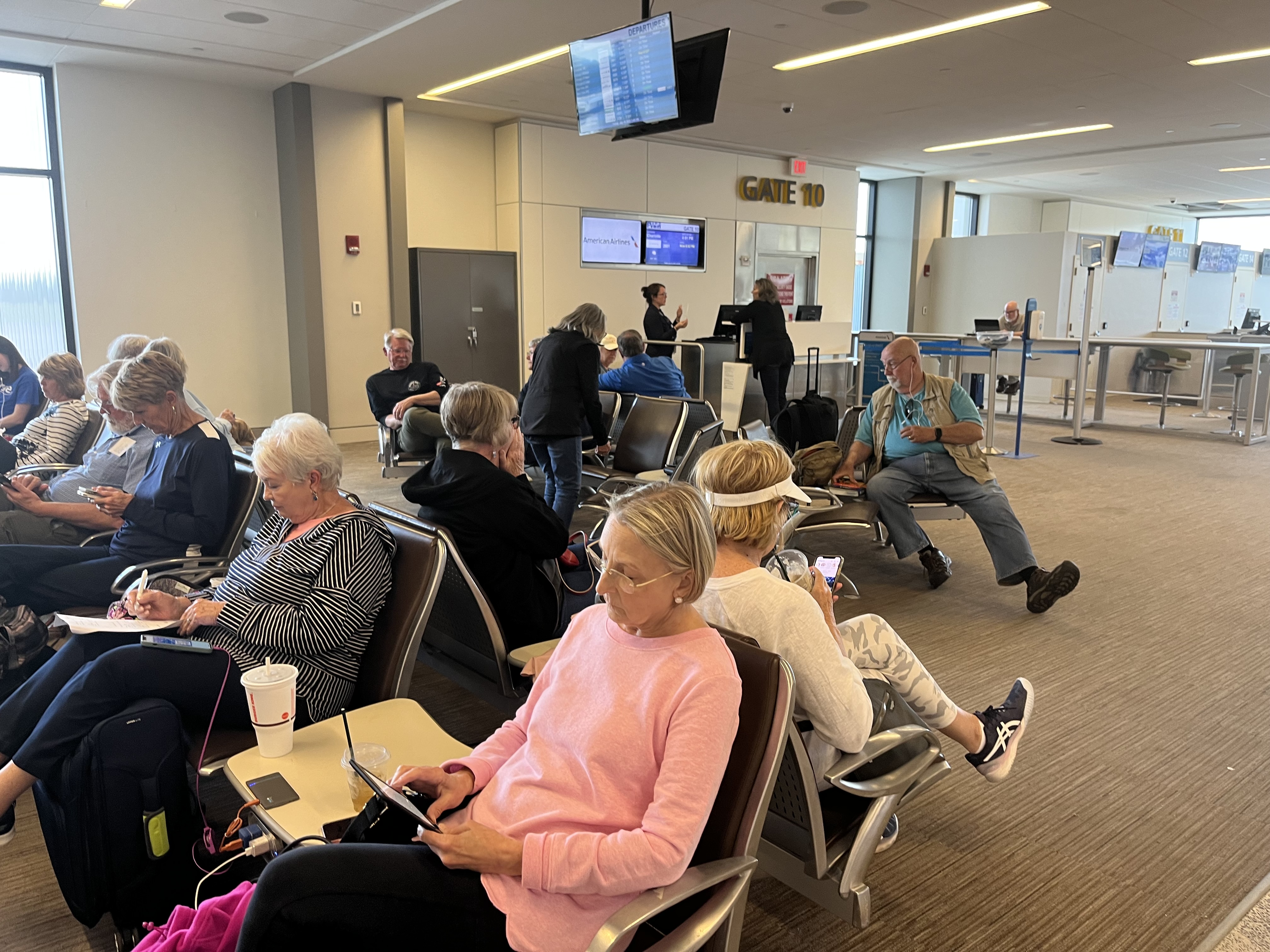 We were a bit worried about our connection in Charlotte but the airline representative in Portland came and said: Little Rock group, don't worry, they will hold the connection.  Again, we were happy.

We finally took off and arrived in Charlotte about 10 pm but our connection there got delayed some more.  We also changed terminals 4 times.  During one of those changes, some other travelers did not listen and put a wheelchair on one of the rolling people movers and caused a log jam with some of our travelers about to collide.  Luckily, Mike pushed the stop button and we survived with a few hurt toes only--it could have been much worse.

At midnight, we finally boarded our plane and we were pleased that home was just a short distance away, or so we thought.  After sitting on the airplane for an hour with a computer glitch that needed fixing, our pilot timed out and we had to unload for a cancelled flight. It was now 1 a.m.  I had everyone sit while I started the arduous task of getting 32 travelers rebooked on another flight.  We also called around looking for accommodations, but needing 20 rooms there wasn't anything to choose from, and all the vouchers for the night were already gone from the airlines.  We got to spend the night in chairs, freezing in the airport. We also got food vouchers, but half worked, and half did not.   I got us all on a flight at 8:50 p.m. later that evening, but we still needed boarding passes and someplace to sleep. I was told to come back at 6 a.m. for boarding passes, and 10 for hotel vouchers.  I got both accomplished by 9:30.  Several of us also found the new minute suites, small rooms (Shoeboxes as Clay calls them) 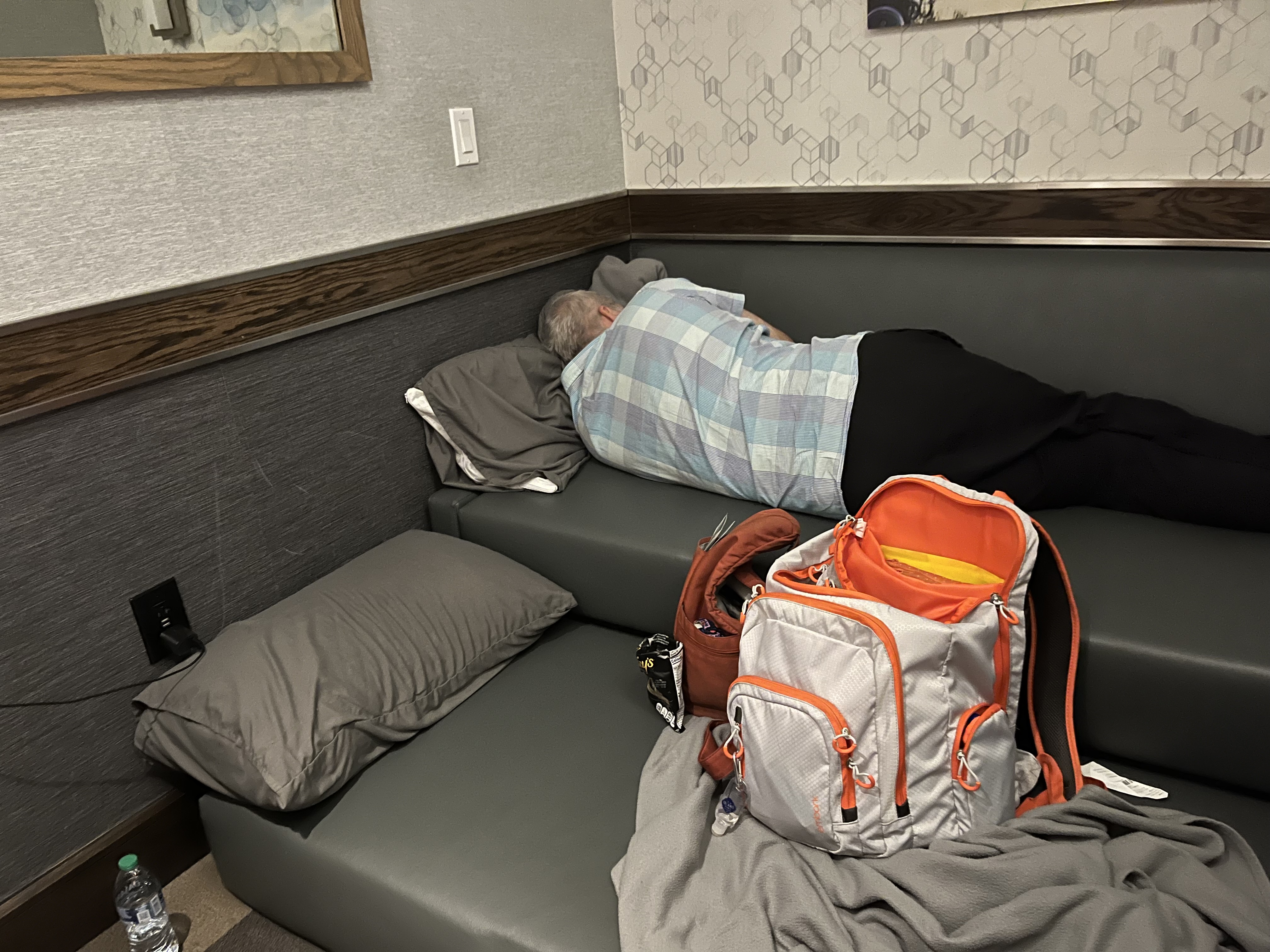 to sleep in by the hour, and charged by the hour.  12 of us slept for several hours in those.  I got the rest of us vouchers at the Airport Sheraton where they slept and showered.  We all reconvened at 6 p.m. Our gate did not change this time, but our flight did get delayed, first by 10 minutes, then an hour. Our plane finally arrived. 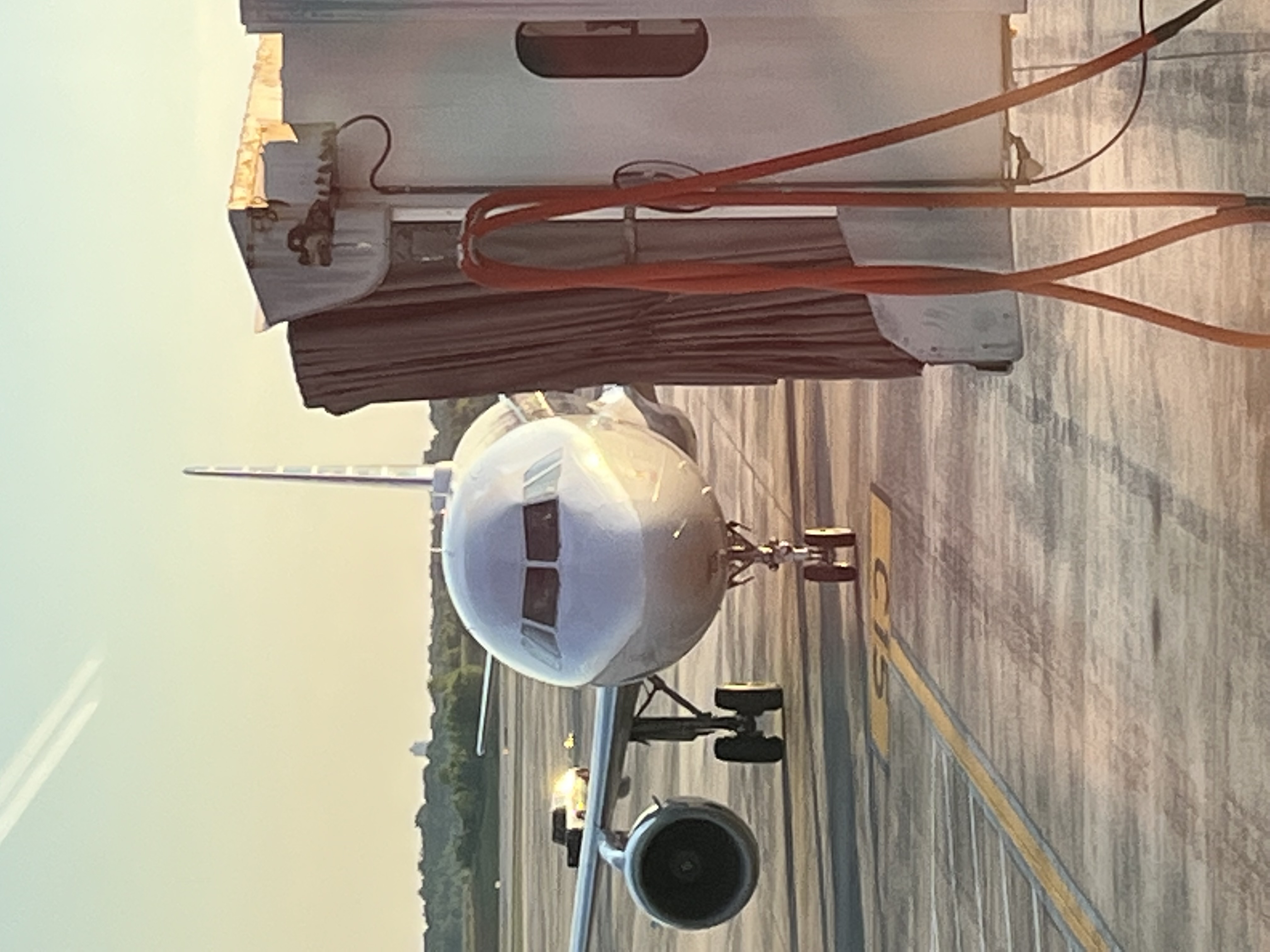 We were now waiting on pilots, then flight crews.  We eventually got both and took off at 10:30 p.m. with an arrival in LR at 11 pm central time.  We arrived on time, but then waited 20 minutes for personnel to meet the plane to direct it in.  Then we waited even longer for our luggage. 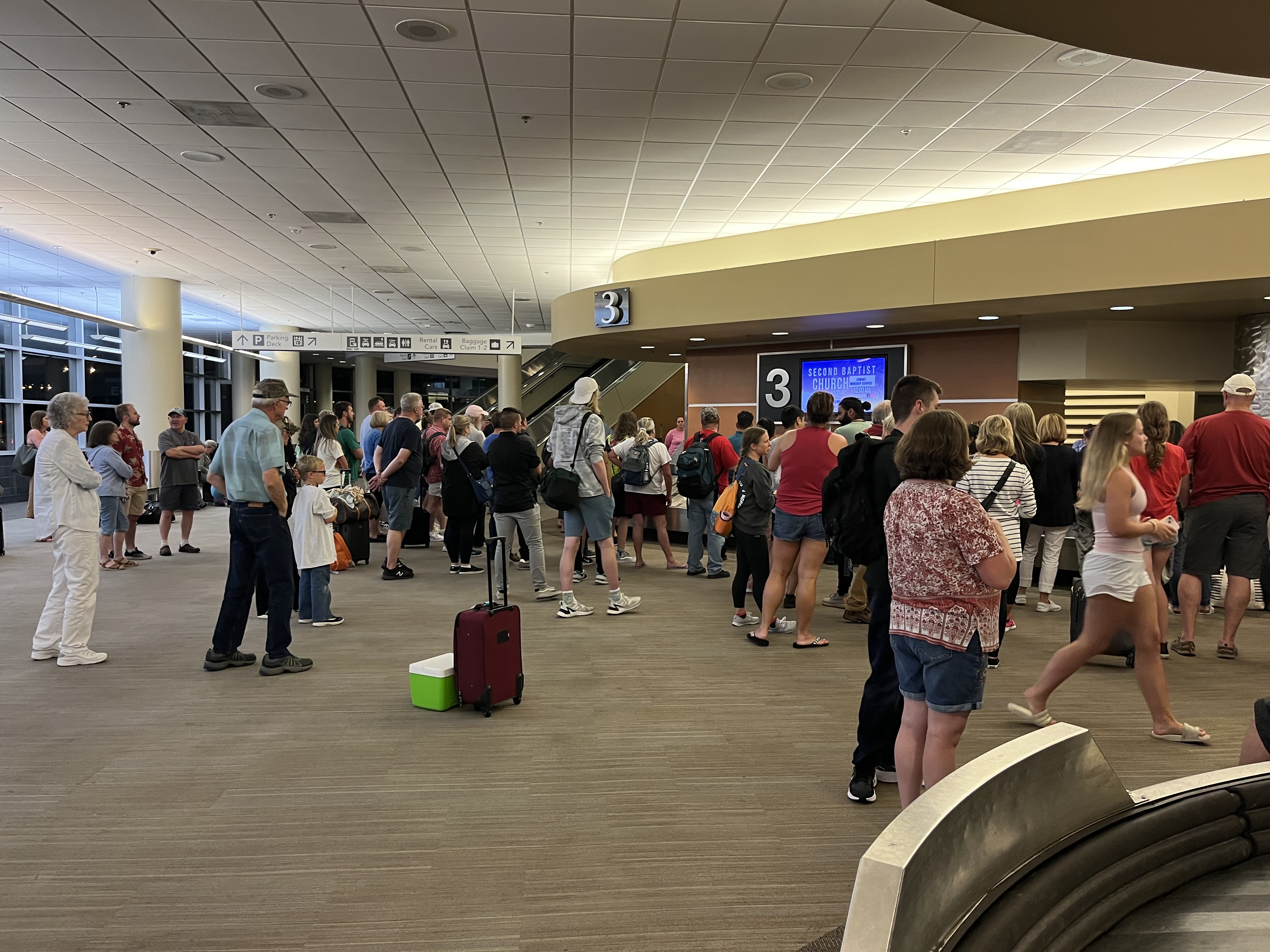 All total, we were at the airport for a solid hour after we landed.  I got home at 12:30 a.m. and in bed a bit before 1, but I was home and in my own bed.   We had several solo flyers who made it with no problems.

In spite of the difficulties, we all have a slew of new stories to tell, and we are all comrades in arms.  I also want to thank all our travelers for meeting this adversity with grace and humor--no one was happy with the situation, but everyone made the best of it, and helped each other out.  That is why I love traveling with Arkansas gardeners!  if you need any pointers about the Charlotte airport, just ask. We are all intimately familiar with every inch of it, because we walked it several times over.

If you are planning a flight in the near future, a word of advice.  Give yourselves plenty of time, take a good book to read, carry a change of clothes, any medicines you might need and a ton of patience.  In spite of it all, we had a great trip.