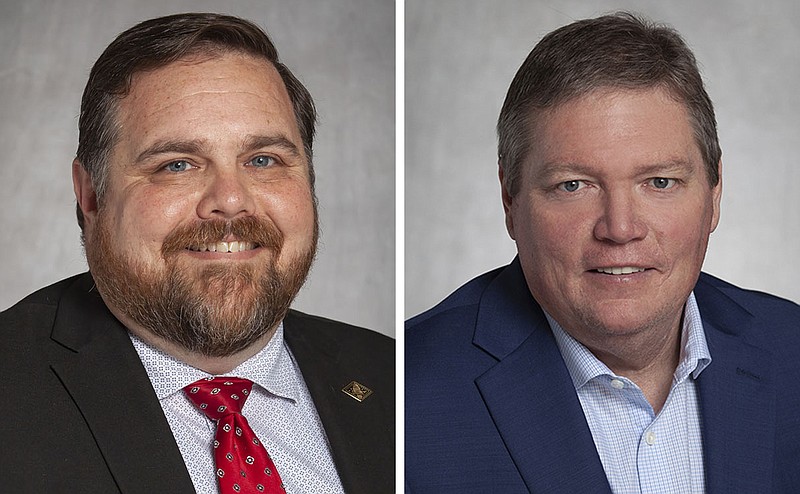 Two well-known Arkansas lawmakers are battling it out for the Republican nomination in Senate District 28.

Between them, the two men have spent 22 years in the state Legislature.

The winner of the June 21 runoff election will face Jim Wallace of Eureka Springs, an artist and owner of Paradise Pottery, in the Nov. 8 general election.

King got most of the votes in the May 24 Republican primary election.

According to the Arkansas secretary of state's office, the results were:

On Monday, Slape, the third-place finisher, endorsed Ballinger in the runoff election.

"Sen. Bob Ballinger has been a proven conservative voice who has fought to lower taxes, protect our rights, back the blue and stand up to woke activists," said Slape.

District 28 stretches from the Missouri state line south to Interstate 40 in the Arkansas River Valley. The district includes all of Carroll and Madison counties and parts of Boone, Franklin, Johnson and Newton counties.

Ballinger, 48, a lawyer, is considered the incumbent in the race. Since 2019, he has represented the old Senate District 5, which included some of the same territory as the new Senate District 28. The districts are redrawn every 10 years after the census.

King, 53, a cattle and poultry farmer, represented Senate District 5 from 2012 until he was defeated by Ballinger in the 2018 Republican primary race by 374 votes. Ballinger went on to win the general election in November 2018.

Ballinger and King each spent six years in the state House of Representatives before serving in the Senate.

Both candidates consider themselves conservatives.

In his campaign announcement, Ballinger said he had led the fight to expand Second Amendment rights in Arkansas. He said there were "relentless attacks on Arkansas values and our way of life."

In King's campaign announcement, he said it was time to "drain the political swamp." King said he has a history of "standing up to the establishment."

The candidates agree on many of the issues but don't seem to care much for each other personally.

According to campaign finance reports filed with the Arkansas secretary of state's office, Ballinger received $82,375 in contributions for the 2022 primary election and spent $58,157.

State Sen. Bart Hester, R-Cave Springs, donated $500 and gave Ballinger $1,260 worth of non-money contributions, namely banners for trailers, according to the filings.

Ballinger spent much of his money on consulting fees to JCD Consulting of Little Rock.

Ballinger's campaign paid JCD Consulting of Little Rock $36,288 from December through May.

According to King's campaign filing, he received $17,160 in contributions and had $137,489 in total expenditures. His top donors were in the legal field. They included Justice PAC of Little Rock, which was established by the Arkansas Trial Lawyers Association ($2,900); Brad Hendricks, a Little Rock lawyer ($2,900); and Greg Thurman, a Berryville lawyer ($2,700).

Most of King's expenditures were for advertising, according to the filings. In April, he paid Clint Reed of Alexander $51,639 for political mailings and consulting. Reed was paid another $36,543 in May for "mail."

Reed is the former chief of staff for U.S. Sen. Marco Rubio, R-Fla.