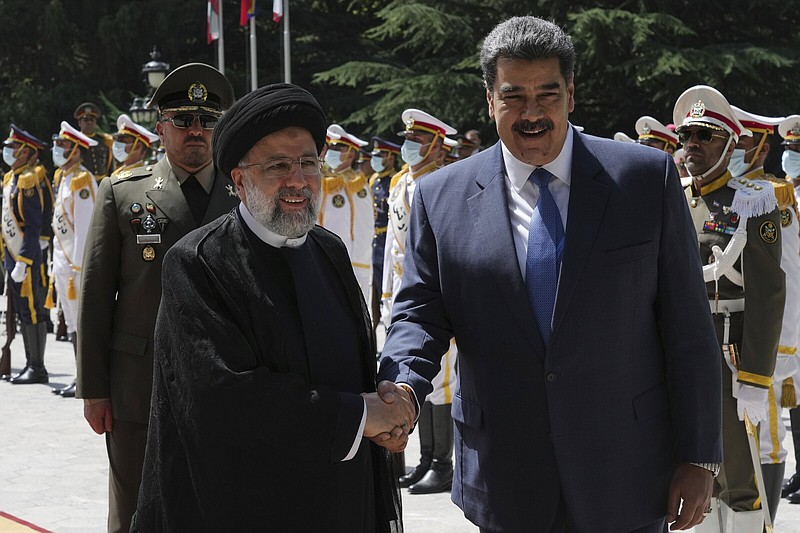 In an interview with Maduro after his arrival in Tehran for a two-day visit, Iranian state media reported late Friday that Maduro hailed Iran's move to send fuel tankers to his energy-hungry nation.

"Tehran's delivery of oil to Caracas was a great help to the Venezuelan people," he said.

Maduro's first visit to Iran comes amid tensions across the Middle East over the collapse of Iran's nuclear deal with world powers. U.S. sanctions and rising global food prices are choking Iran's ailing economy, putting further pressure on its government and its people.

A high-ranking political and economic delegation from Venezuela -- which like Iran is under heavy U.S. sanctions -- is accompanying Maduro on his visit, following an invitation from hard-line President Ebrahim Raisi.

In a joint news conference Saturday, Raisi and Maduro signed a 20-year agreement to expand ties in the oil and petrochemical industries, the military and the economy.

Iranian English-language PressTV quoted Maduro before the news conference as saying the two men would meet to discuss "the need to well inform the Iranian and Venezuelan nations about the war of sanctions and find ways to counter them with steadfastness."

Maduro said Venezuela and Iran are united by "a common vision" on international issues and are both victims of coercive measures by the United States and its allies.

"Caracas and Tehran have shaped the strategy of [a] resistance economy and are working to expand it," he said.

On his website, Ali Khamenei, Iran's supreme leader, said that the successful experience of the two countries showed that the only way to face the United States' pressures and wars is "to resist." He thanked Maduro and the people of Venezuela for their resistance, saying that "today, the United States views Venezuela differently."

Maduro is on a Eurasia tour after President Joe Biden decided not to invite him to the Summit of the Americas, which began Thursday. His stops earlier this week included Algeria and Turkey.

Turkey is one of a handful of places around the world -- Russia and Iran are among them -- where Maduro is welcome amid U.S. sanctions on his country.

Venezuela, Cuba and Nicaragua were not invited to the summit by the Biden administration because of their authoritarianism and human rights violations. That decision led to Mexico's president announcing he would not attend.

Raisi praised Maduro as a leader "who has shown a policy of fighting against imperialism and has achieved a good position by overcoming sanctions and threats."

Maduro announced that a direct flight between Tehran and Caracas would begin next month.

The semi-official Tasnim news agency later reported that Iran had delivered the oil tanker Aframax-2 to Venezuelan officials, the second of four vessels Iran was contracted to build for the South American country.

Amid rising tensions with the West, Iran has started removing 27 surveillance cameras from nuclear sites across the country, the head of the U.N. atomic watchdog said Thursday. He warned this could deal a "fatal blow" to the tattered nuclear deal as Tehran enriches uranium closer than ever to weapons-grade levels.

That development came a day after the International Atomic Energy Agency's board of governors censured Tehran for failing to provide "credible information" over manufactured nuclear material found at three undeclared sites in the country.

Iran's currency dropped to its lowest value ever after the censure -- to 327,500 rials to the dollar.