Lynch leads a gleeful tour of her home state of Illinois 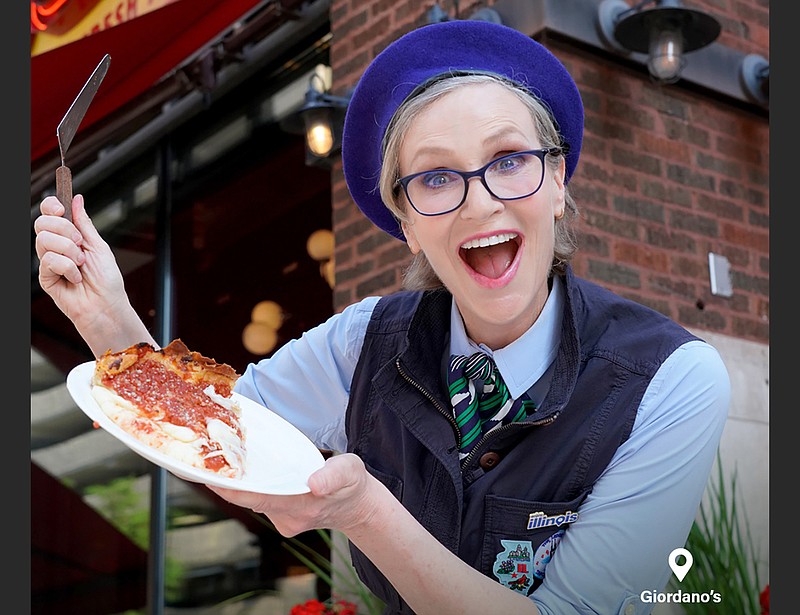 In April, Jane Lynch started appearing in two places at the same time: in New York, in the Broadway revival of "Funny Girl," and around the Midwest, in regional and national ads for the Illinois Office of Tourism.

For the "Middle of Everything" campaign, the award-winning actor traipses around the Prairie State wearing a jaunty blue beret and a gleeful expression. Playing the role of official tour guide, the Illinois native comes face-to-hologram-face with Honest Abe at the Abraham Lincoln Presidential Library and Museum in Springfield, gets her kicks at the Illinois Route 66 Hall of Fame & Museum in Pontiac and waddles with penguins at the Shedd Aquarium in Chicago. In addition, Lynch, who directed two of the four ads, assembled a list of her favorite places to eat, sleep, soak up culture and, of course, laugh.

Lynch, who is temporarily based in New York, talks about her affections for her home state, which include an allegiance to the Chicago Cubs but not to deep-dish pizza. (The following responses have been edited for length and clarity.)

Q: What is your connection to Illinois?

A: I was born in Dolton, Ill., and went to Illinois State University in Normal, getting an undergrad degree in theater arts. I did theater in Chicago after college, working in a lot of non-equity theater companies (which means for free), and finally got my equity card touring with Second City and performing in Steppenwolf Theatre shows.

Q: How did the state shape your interests, creativity and sense of humor?

A: In terms of Chicago theater, it's an actors' town. A lot of self-starters creating their own companies. Actors come from all over the country to Chicago to create their own work and blaze their own trail. There's a purity to the arts and theater in Chicago. It's done for art's sake. You don't hear a lot of talk about, "Oh, I hope this gets me a sitcom."

Q: Did you enjoy attending college a few hours south of Chicago?

A: I went to school in Normal, and it's a little town basically full of cornfields. It's quite rural and simple and a perfect place for a university. Bucolic and far enough away from home to feel almost exotic!

Q: Where do you live now, and how often do you return to Illinois?

A: I have lived in Santa Barbara, Calif., for the past 30 years. My parents, who have both passed, never left the south suburbs of Chicago, and my sister and brother are raising their families in the south suburbs. My 91-year-old Aunt Marge still lives in the city. I spend every Christmas in Chicago and get back there to visit often. My sister and I just bought a house together in Hinsdale, about 20 miles west of downtown Chicago.

Q: What makes Illinois such a special place to visit?

A: Illinois has everything: a big, beautiful lake that's almost an ocean, untouched prairies and a state capital, Springfield, that is bursting with Abraham Lincoln remembrances. Illinois also contains Chicago, one of the most beautiful and cosmopolitan cities on the map. As opposed to New York and Los Angeles, Chicago is known for its down-to-earth people — a small-town feel in a big city. An ordinance was created that forbids building on the beautiful Lake Michigan shore, so our beaches are plentiful and stretch the length of the city.

Some of the most beautiful architecture is in Chicago. Frank Lloyd Wright lived and worked in Oak Park, a nearby suburb, and many of his famous houses can be found there. Some of the most iconic Bauhaus structures in the world are also in Chicago. The architecture boat tour along the Chicago River is exhilarating. The World's Fair was in Chicago in the late 19th century, and two of the buildings remain standing, because they were so beautiful and it seemed a shame to knock them down. The fire of that era also destroyed most of the Near North Side of the city, meaning that anything new had to be built in stone or other nonflammable materials. No more wood!

Q: What misconceptions do people have about Illinois?

A: That it's flat prairie land. It's not. It's gorgeous, replete with rolling hills and breathtaking bodies of water, plenty of places to camp and sightsee, some of the best food in the world and some really nice people.

Q: If Illinois were a person, what sense of humor or personality would it have? Would it be the life of the party, dancing on the coffee table; the prankster, pouring booze into the hot tub; or the polite guest who cleans up the empties?

A: Illinois has too much variety to be one person. But one person could find many different things to do. It's Midwestern. There's a simplicity and a gorgeousness to the landscape. Some of the funniest people are from Chicago, and not just from Second City. There seems to be a really great sense of humor and lack of pretentiousness in Chicago and Illinois. It's also a virtual melting pot. I heard once that Chicago has one of the largest Polish populations outside of Warsaw. My grandparents came to Chicago from Ireland. There are Swedish neighborhoods and African American neighborhoods, Russian neighborhoods and Chinese neighborhoods.

I asked Lynch to share some of her favorite Illinois attractions. Here are her recommendations:

◼️ The Ulysses S. Grant Home in Galena. Galena itself is a quaint, beautiful town, and it's well worth a trip.

◼️ A Chicago architecture boat tour on the Chicago River.

◼️ Wrigley Field, home of the Chicago Cubs. Outdoor baseball lives at Wrigley, in the heart of Wrigleyville.

◼️ Crystal Lake Park, just off the University of Illinois campus in Urbana.

◼️ Aurelio's Pizza in Chicago Heights. The best Chicago-style pizza is not deep dish. That's for the tourists. Real Chicago pizza is thin crust with tangy, sweet tomato sauce, and no one does it like Aurelio's.

◼️ The Ann Sather restaurant on Belmont Avenue in Chicago. Authentic Swedish cuisine and an institution on the North Side.