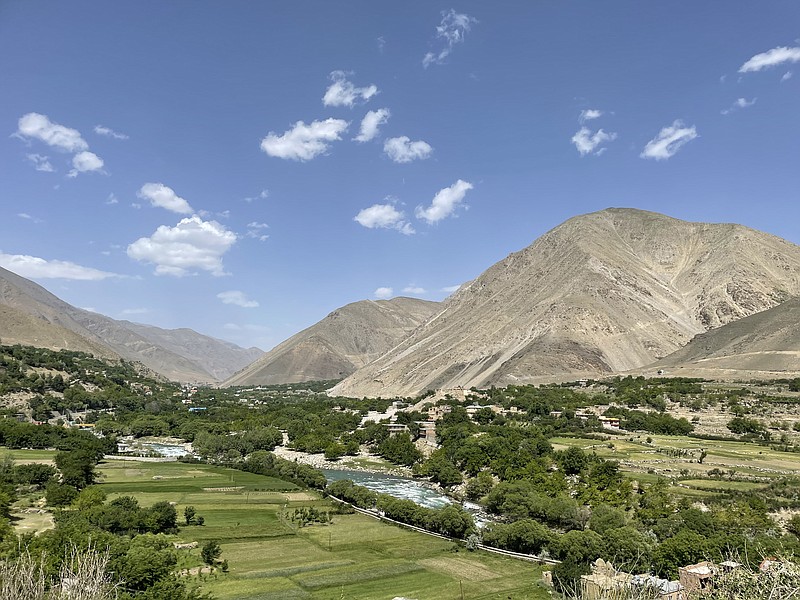 Afghanistan's Panjshir Valley, just a few hours' drive north of Kabul, has long been an anti-Taliban stronghold and remains the only significant pocket of resistance to the group nearly 10 months after the fall of Kabul. MUST CREDIT: Washington Post photo by Susannah George.

DARA, Afghanistan -- Taliban forces have been locked for months in a shadowy on-again, off-again battle with opposition fighters based in the Panjshir Valley. Just a few hours' drive north of Kabul, the province has long been an anti-Taliban stronghold and remains the only significant pocket of resistance to the group since the fall of Kabul last August.

The Washington Post secured a rare visit to the mountains and villages where the fight is playing out, getting a glimpse of a conflict that the Taliban has gone to great lengths to conceal.

Taliban officials flatly deny there is any violence in the area, even though thousands of the group's forces are visible across the valley. "Everything here is fine," insisted Nasrullah Malikzada, the Taliban's local information director in Panjshir. "There is no fighting at all."

Yet residents say assaults on Taliban positions are a regular occurrence, and dozens of people have been killed, with some civilians imprisoned in sweeping arrests. Those residents spoke on the condition of anonymity or used only one name for fear of reprisals.

The clashes in Panjshir are unlikely to pose an imminent threat to the Taliban's control of the province or the country, but the violent resistance here punctures key narratives propping up the movement's claim to legitimacy: that its rule has brought peace to Afghanistan and that its fighters are capable of maintaining security.

When the Taliban swept into Kabul in summer 2021 and the Afghan military melted away, a small band of fighters in the Panjshir held out for weeks. The Taliban claimed to have taken full control of the valley in September, but spokesmen for the National Resistance Front say they never surrendered.

Panjshir has a long history of resistance: It was the one province Taliban fighters were never able to pacify after taking Kabul for the first time in 1996. The current anti-Taliban movement is led by Ahmad Massoud -- the son of legendary resistance leader Ahmed Shah Massoud, who was assassinated by al-Qaida two days before the Sept. 11, 2001, attacks on the United States -- and former vice president Amrullah Saleh. Both men fled Afghanistan in late 2021, but they continue to direct operations from exile and are believed to command thousands of fighters.

A commander of approximately 100 fighters in Panjshir said the opposition is mostly armed with weapons shipped into Afghanistan across its borders with Uzbekistan and Tajikistan. But the munitions, including heavy weapons such as rocket launchers, are not enough.

"We are supported by several countries, but we need more," he said, speaking on the condition of anonymity for security reasons.

Taliban leaders have sought to contain news from Panjshir by limiting access to the valley and issuing sweeping denials when confronted with reports of fighting.

"Of course no one knows what is happening here," a 62-year-old shopkeeper named Gulzar told The Post on the recent visit to the valley. "No one is allowed to come here; I don't even know how you got here," he said, cautiously watching pickups and armored vehicles packed with Taliban fighters race up and down the hillside.

The Post was officially granted access to the valley by Taliban leaders in Kabul and Panjshir, who said they wanted media coverage of security and stability in the area. After a guided tour of the province's capital, The Post team was given permission to travel unaccompanied to villages and to interview civilians. Those interactions offered a small window into an opaque struggle.

Gulzar said the most recent wave of fighting spilled into his village. "I was here at my shop when I heard the gunfire begin," he said, pointing to the orchards separating him from his family home on the opposite cliffside. He immediately gathered his relatives and fled to the mountains.

The clashes raged for more than a day before anti-Taliban fighters ran out of ammunition and surrendered. Gulzar said he watched dozens of men hand over their weapons before being taken away. Two other men from the area confirmed his account.

Malikzada, the Taliban information minister, said the fighting Gulzar described was "propaganda from outside forces" and "entirely false." He also denied restricting access to Panjshir, though he admitted to having recently blocked at least one international news outlet from visiting the valley because he thought the organization repeatedly published reports filled with "lies."

Under Taliban rule, information that challenges the official line is increasingly difficult to verify. The country's media landscape has shrunk, civil society faces constant intimidation, and human rights groups have either disbanded or operate under severe limitations.

In Panjshir, there are competing, one-sided narratives. As the Taliban maintains that all is calm, spokesmen for the resistance post near-daily social media updates on their armed struggle. Residents have learned to be skeptical.

"There is a lot of propaganda [on both sides] in the war in Panjshir," said a farmer in Dara village who was once a member of the Afghan police force.

The farmer says he often sees the bodies of dead Taliban fighters driven away in the back of trucks after battle, though he thinks claims by the resistance to have killed more than 300 fighters over the past month are greatly exaggerated.

"It's a big province. People in one village don't necessarily know what's going on in another every single day," said Ali Maisam Nazary, the head of foreign relations for the resistance. Nazary said the group's information comes from commanders on the ground and informants inside the Taliban.

The farmer believes both sides are playing down civilian casualties. After a recent clash, he said he attended back-to-back funerals for 10 people killed in the crossfire in his village alone. Talking to friends and family elsewhere in the valley, he estimated the total number could have been four times that in a single day.

Both the Taliban and the National Resistance Front claim that no civilians have been killed in the recent fighting.

"Maybe two or three people have died, [but] it was probably from the cold or from falling off a mountain," Malikzada said. , the Taliban's information minister "No one has been killed in clashes."

Clashes have increased since the end of the holy month of Ramadan in May, according to residents interviewed by The Post. Spring has always marked the beginning of Afghanistan's fighting season, as the weather in the north becomes milder and makes it easier for fighters to maneuver.

The attacks have become more brutal as casualties have mounted on both sides, according to a tribal elder, Tawhidi, who spoke on the condition that he be identified only by his last name for fear of reprisals. He said he has witnessed Taliban fighters carrying out summary executions after suffering losses in an assault and has heard similar reports from other parts of the valley.

Faramaraz, who works in a bazaar not far from Dara village, said Taliban fighters left the body of a dead opposition fighter on the side of a main road in late May.

"They wanted everyone to see," he said. "And they wouldn't allow the men to move him for burial; they made the women take the body to the cemetery."

Malikzada conceded that thousands of Taliban fighters have been dispatched to the province, including some of the group's most elite units. Their forces can be seen everywhere in the valley, and sophisticated military equipment is positioned along otherwise idyllic orchards and rivers.

DadMuhammad Battar, a former Taliban Red Unit commander in Laghman, is now one of the group's top special forces leaders in the area. He said he coordinates with similar units attached to the Defense Ministry and a Taliban quick-reaction force stationed in the provincial capital.

"The situation is completely fine here," he said, seated beside a bouquet of plastic flowers and a dozen American-made M-16 rifles. "We go on patrol, but we haven't conducted any operations. We are mainly here to focus on criminal cases."

Along the road just outside Battar's base, dozens of Taliban convoys could be seen weaving in and out of the valley as the sun began to fade. Further down, heavy armored vehicles -- Humvees and MRAPs -- formed checkpoints along the roads leading to and from villages that residents said had seen the most recent round of fighting.

"It's important for the foreigners to trust us," Malikzada said at the end of the guided tour. "We don't lie to the foreign media. The Islamic Republic of Afghanistan already proved to the people of Afghanistan that everything we say is the reality."

Turning to The Post reporter, he added: "There is no reason for you not to trust us." 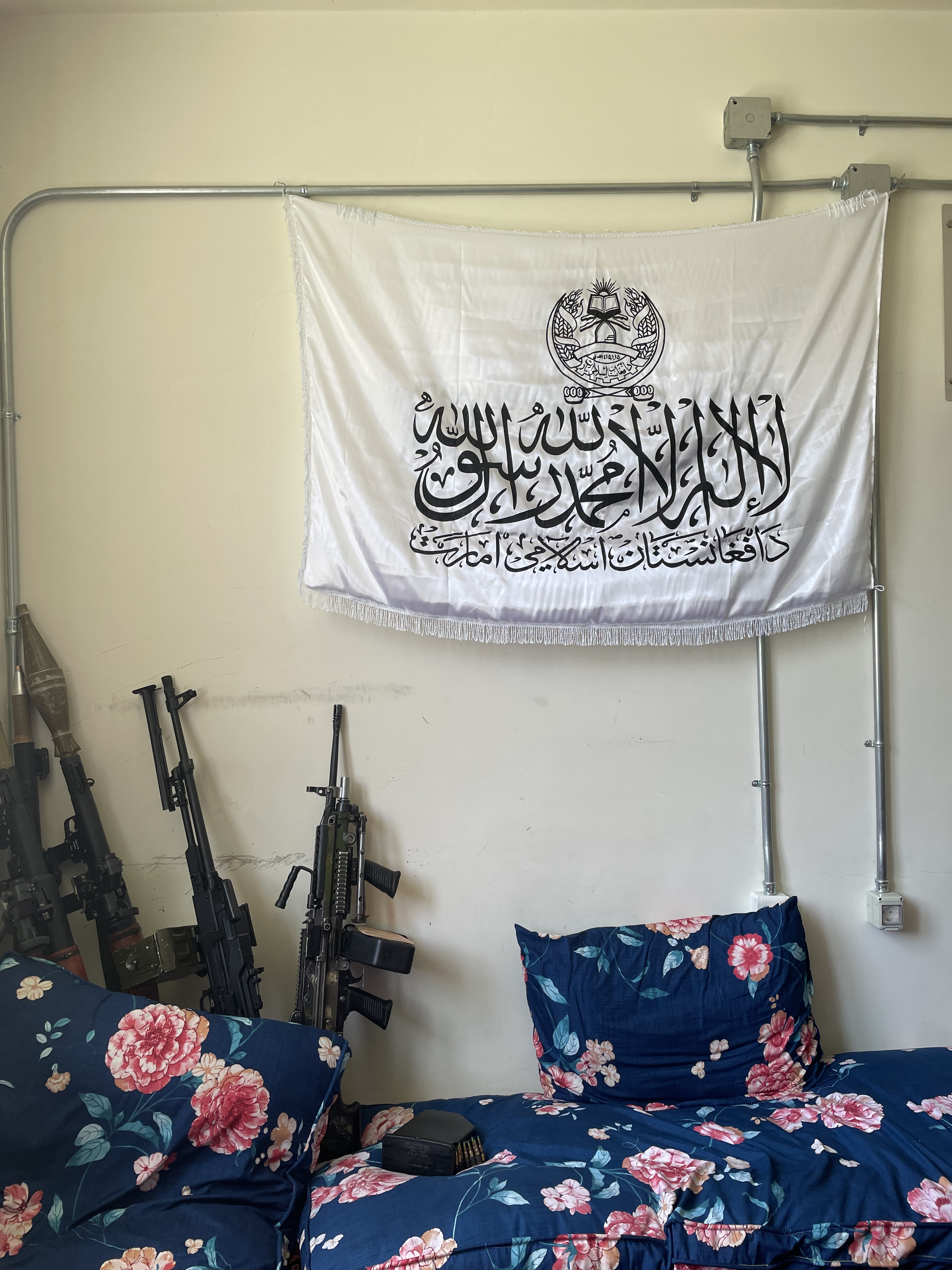 American- and Russian-made firearms at a Taliban special forces base in Panjshir. Taliban leaders insist there is no fighting in the valley, but thousands of fighters, including some of the group's most elite units, have been dispatched to the area. MUST CREDIT: Washington Post photo by Susannah George.