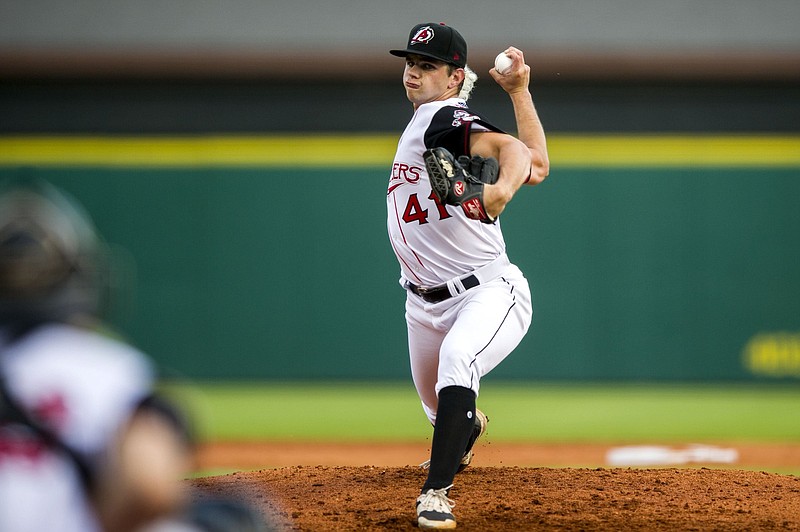 Taylor Dollard isn't particularly concerned with his stats. Not that most players are.

But when talking about Dollard, it's impossible to ignore his 0.86 earned-run average.

Yes, zero point eight six -- and no, that's not a typo. The product of 5 earned runs over 52 1/3 innings in 11 starts, Dollard has the best ERA in all of major- and minor-league baseball this season among qualified pitchers.

Just seven guys in Class AA or above have a sub-2.00 ERA. The next closest mark in the Texas League is 2.13.

"Honestly, I don't really think about it too much," Dollard said.

The 23-year-old right-hander kept up the act Saturday night at Dickey-Stephens Park in North Little Rock, helping the Arkansas Travelers to a 5-2 win against the Wichita Wind Surge. Dollard pitched 5 shutout innings -- striking out 8 and allowing 4 hits on 87 pitches -- while the Travs' offense buoyed him with a four-run second inning.

Cade Marlowe capped the early outburst with a 369-foot home run down the right-field line, staking the Travs to a 4-0 advantage they'd never surrender.

Dollard credited his defense for as much of his success as anything. Patrick Frick made multiple diving grabs at shortstop and catcher Matt Scheffler threw out consecutive runners in the third inning.

But their efforts pale in comparison to Dollard's

He struck out the side in the first, working around a pair of two-out singles. The Wind Surge didn't get a runner in scoring position for the next four innings.

Dollard, the Mariners' 2020 fifth-round pick, isn't particularly overpowering. His fastball sits around 92 mph, but he does his damage with a looping curveball in the high 60s and low 70s as well as a change-up that was the focus of his work entering 2022.

As is the case with all of the Travs' young arms, Dollard is constantly learning from his teammates.

Currently ranked as Seattle's No. 14 prospect, Dollard has shared a clubhouse with George Kirby (No. 2), Emerson Hancock (No. 5), Levi Stoudt (No. 6) and Stephen Kolek (No. 29) this season alone.

It makes for what Dollard describes as an "irreplaceable" environment.

Even after a full outing Saturday, Dollard wasn't done working. He and Hancock discussed grips and mimicked their release while hanging over the railing near the far end of the Travs' dugout in the ninth inning.

And surely it was Dollard because, well, he's just about impossible to miss.

Although his black hair usually remains tucked under his cap, Dollard's long blonde locks always flood out the back.

It's something he's stuck with since his junior year at Cal Poly. The mother of one of Dollard's teammates was beginning chemotherapy, so all of the Mustangs shaved their heads during his sophomore season.

When their hair returned, they decided to grow mohawks. Eventually it got long enough, and Dollard, on a whim, decided to bleach the ends.

With his season going this well, there's certainly no reason for Dollard to change anything -- hair included -- anytime soon.

"I plan on sticking with it until it starts falling out," he said.