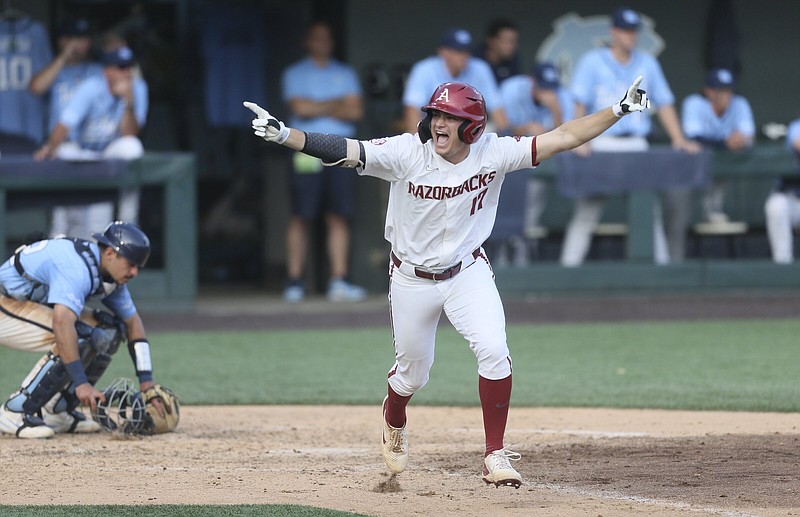 Arkansas Brady Slavens (17) celebrates, Sunday, June 12, 2022 at the end of the 9th inning during the NCAA Baseball Super Regional game 2 at Boshamer Stadium in Chapel Hill, NC. Check out nwaonline.com/220613Daily/ and nwadg.com/photos for a photo gallery...(NWA Democrat-Gazette/Charlie Kaijo)

Slavens has 15 home runs and 10 doubles on the season, but the left-handed hitter was batting .231 against lefties with 20 strikeouts in 65 at-bats.

With runners on first and third base, O'Brien desperately needed a strikeout, as he got against Slavens in the ninth inning Saturday when the Razorbacks beat the Tar Heels in the super regional opener.

But Slavens came through with a game-winning single that lifted Arkansas to a 4-3 victory at Boshamer Stadium.

The Razorbacks (43-19) won the best-of-three Chapel Hill Super Regional 2-0 and advanced to the College World Series in Omaha, Neb., for the 11th time.

Slavens hit a 1-0 fastball from O'Brien into right field to score Peyton Stovall from third base as Arkansas -- the designated home team -- overcame a 3-2 North Carolina lead the Tar Heels had taken in the top of the ninth inning.

O'Brien, who pitched three scoreless innings in the Razorbacks' 4-1 victory on Saturday, came into Sunday's game for Davis Palermo after the Razorbacks tied it 3-3 on a RBI groundout by Braydon Webb.

"I kind of knew they were going to bring him in," Slavens said. "They were warming him up."

Slavens faced O'Brien twice Saturday and had an RBI single along with striking out.

"I had seen him, seen all of his pitches and I felt comfortable," Slavens said. "I put a good swing on it the first pitch I saw in the zone."

Slavens spoke calmly after the game, as if the Razorbacks had just won a midweek non-conference game instead of a super regional.

"It's just a game," Slavens said. "You don't need to make the moment bigger than what it was.

"We already tied the game. There's no pressure. Just put a good swing on it."

Jalen Battles began Arkansas' ninth-inning rally with a single off of Palermo, the Tar Heels' closer.

Stovall, who homered in Saturday's game and was 3 for 4 on Sunday, followed with a single that sent Battles to third base.

"Obviously, I wasn't going to play for the tie," Arkansas Coach Dave Van Horn said of letting Stovall swing away rather than try to bunt Battles to second base. "It's supposed to be 97 degrees tomorrow. I wanted to win tonight.

"Peyton Stovall, he's on fire right now. I mean, the only out he made he hit the ball hard to second base. What a great at-bat, slashing one into the gap.

"First and third, nobody out. We felt like we were going to win the game."

With North Carolina leading 3-2, Van Horn pinch-hit freshman Kendall Diggs for Zack Gregory. Diggs drew a four-pitch walk at-bat to load the bases and send Battles to third base and Stovall to second.

It was the first at-bat for Diggs since Arkansas played Alabama in the SEC Tournament on May 25.

"Kendall Diggs hadn't been up to the plate in [18] days, and he looked polished up there," Van Horn said. "He took a couple borderline pitches and drew a walk. Pushed a runner into scoring position that's the winning run."

Webb followed with the run-scoring groundout to tie the score 3-3 and set the stage for Slavens' game-winner.

The Razorbacks went 2-0 in a super regional for the first time since they swept Florida State in 2009 at Tallahassee, Fla.

"I want to congratulate Arkansas. They've a heck of a team. A heck of a season they've had.

"They play the right way. They play hard. They don't showboat. They keep their mouths shut, and they play how baseball is supposed to be played."

North Carolina (42-22) took a 3-2 lead with two outs in the top of the ninth inning when Patrick Alvarez -- a defensive replacement batting .121 (4 for 33) -- singled off Arkansas freshman left-hander Hagen Smith to score Tomas Frick from third base.

It was Alvarez's first RBI since Feb. 20 in the Tar Heels' 7-3 victory over Seton Hall.

"I feel very fortunate to win the ballgame," Van Horn said. "I thought Will McEntire did a tremendous job for us right out of the gate."

McEntire, a sophomore right-hander, started for the Razorbacks and pitched 5 2/3 scoreless innings and limited the Tar Heels to 3 hits and 2 walks with 4 strikeouts. He got a text Sunday morning from pitching coach Matt Hobbs that he would be starting.

"I just knew I needed to do the job to get my team to Omaha," McEntire said. "I was ready to go. I was excited.

"This is probably the best day of my life."

North Carolina scored two runs in the top of the seventh inning to tie it 2-2.

Mikey Madej hit a leadoff single against Kole Ramage, who then hit Frick with a pitch to put runners on first and second base. Brady Tygart replaced Ramage and the runners advanced on a sacrifice bunt by Johnny Castagnozzi.

Madej scored on a groundout by pinch hitter Eric Grintz, which moved Frick to third base. Frick scored on a wild pitch by Tygart, who then got pinch-hitter Max Riemer on a flyout.

North Carolina got the tying runs on base with one out in the sixth inning after an infield single by Colby Wilkerson and a walk by Honeycutt. McEntire got Serretti on a flyout, then Van Horn brought in Ramage.

Ramage ended the scoring threat when Alberto Osuna popped out in foul territory to Stovall at first base. The ball looked like it might get into the stands, but Stovall caught it against the wall at the edge of the Arkansas dugout.

"[McEntire] still had stuff, but we just felt they were getting to see him a fourth time and it was time to get him," Van Horn said. "We just kept fighting at the plate. What a great comeback."

The Razorbacks went ahead 2-0 in the fifth inning on a one-out home run by Webb against North Carolina starter Brandon Schaeffer.

After Slavens followed with an infield single, Forbes brought in Gage Gillian to replace Schaeffer. Cayden Wallace hit a single to put two runners on, but the Tar Heels got a double play on a ground ball by Michael Turner.

Arkansas took a 1-0 lead in the fourth inning on Battles' RBI double.

"We've known all year how good we can be and the potential of the team," Slavens said of the Razorbacks advancing to the College World Series. "It's just been a crazy year and we're clicking at the right time. I'm just so happy that we can go to Omaha."