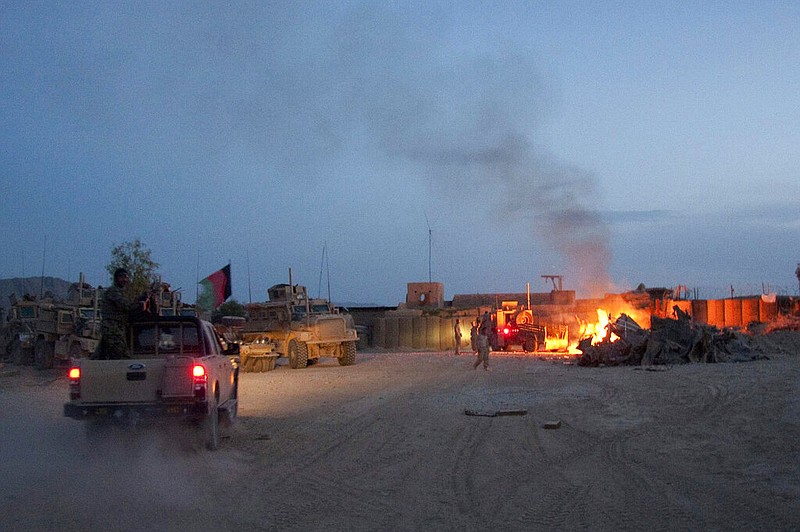 An Afghan National Army pickup passes parked U.S. armored military vehicles as smoke rises from a fire in a trash burn pit at Forward Operating Base Caferetta Nawzad, Helmand province, south of Kabul, Afghanistan, in this April 28, 2011 file photo. The University of Arkansas for Medical Sciences will conduct a study into the long-term health effects from veterans’ exposure to toxic burn pits during the wars in Iraq and Afghanistan. (AP/Simon Klingert)

The University of Arkansas for Medical Sciences will conduct a study into the long-term health effects from veterans' exposure to toxic burn pits during the Iraq War and Afghanistan War.

The research, which will study Arkansas veterans, will determine if exposure to toxic burn pits can be directly linked to numerous health problems.

Leading the study are researchers Shuk-Mei Ho, vice chancellor for research and innovation at the College of Medicine Department of Pharmacology and Toxicology at UAMS and Dr. Kalpana Padala, associate director for clinical research at the Central Arkansas Veterans Healthcare System.

The researchers hypothesize that exposed service members will have persistent organic pollutants in their blood and heavy metals in their urine because of exposure to burn pits. Researchers will also use new genome sequencing technology to study modification to DNA and whether veterans' health problems from burn pit exposure can be passed on to their children.

"This grant is trying to link the diseases or the disorders that the veterans are experiencing right now -- that they believe are derived from that exposure during that time -- to get evidence for them that it is connected," Ho said.

The burns contained numerous kinds of trash including chemical, plastic and electronic and human waste often set ablaze with jet fuel. Since returning home, thousands of veterans were diagnosed with numerous health problems, including various types of skin, lung and heart disorders and cancers.

When veterans made claims to the Department of Veterans Affairs asking for health-care coverage, many were met with skepticism, with officials saying there was not enough evidence to prove that exposure to burning piles of trash could be linked to specific health ailments.

Critical for many veterans, the research will also study if burn pit exposure can modify one's DNA to see if there are biomarkers or signs of modification to one's DNA, which could mean it passes down to future children.

"Our ability to identify these biomarkers is hoped to give veterans and their doctors the information needed to develop personalized prevention and treatment plans for specific medical problems," Padala said in a statement.

The study will recruit 220 Arkansans registered in the Veterans Affairs Airborne Hazards and Open Burn Pit Registry. A further 110 veterans, who were not expose to burn pits, will also be recruited for the study.

The research is being funded by a $2.9 million grant from the U.S. Department of Defense and is estimated to take four years. According to the Department of Defense, an estimated 3.5 million service members may have been exposed to toxic burn pits in Southwest Asia. The practice, which consisted of disposing of waste through burning piles of trash in the open air, was a standard procedure for decades.

The VA has said some veterans' health problems will be presumed to be caused by exposure to burn pits depending on when and where they served and what illnesses they have. But many veteran advocates argue that the list of health problems is not inclusive enough and more research is needed into how exposure to burn pits affects veterans' health long-term.

"There are chronic health issues that they are beginning to experience a few years after they finished their deployments," Ho said.

"The policymakers are desperately needing this kind of information to inform them how to better to do their job and help veterans," she said.

On June 7, President Joe Biden signed a bill into law that expands mammogram eligibility for veterans. The law, sponsored by U.S. Sen. John Boozman, R-Ark., came as some veterans developed breast cancer after exposure to toxic burn pits during their service.

"This is a tremendous day for the men and women who served our country and now rely on the VA for quality health care and benefits," Boozman said in a statement. "I've been pleased to work in a bipartisan way to get these measures across the finish line so we can save lives through modern approaches to breast cancer screening and treatment as well as increased accountability within the department."