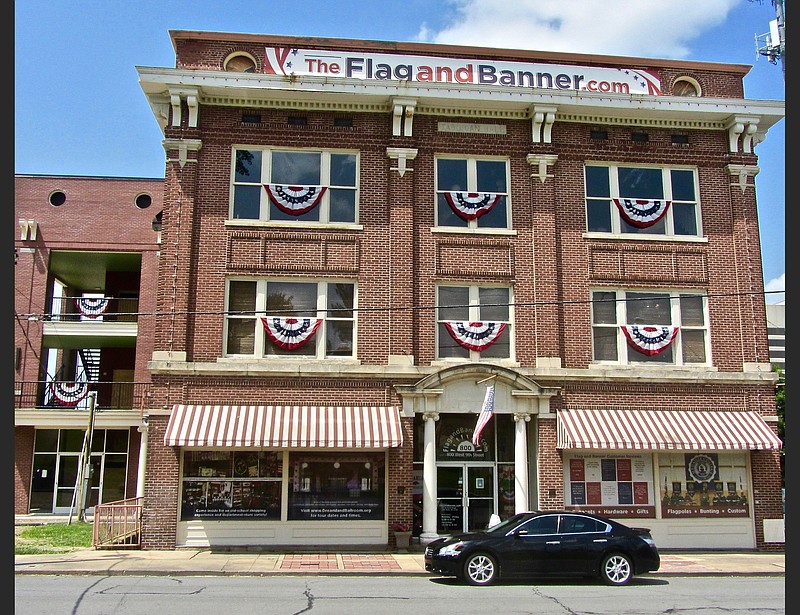 The building at 800 W. Ninth St. was dedicated in 1918 by a Black fraternal order. (Special to the Democrat-Gazette/Marcia Schnedler)

Two holidays with disparate roots intersect this month at one historic building in Little Rock. Flag Day, a yearly homage to “The Star-Spangled Banner,” takes place today. Juneteenth, which celebrates the freeing of Black Americans from slavery, is on the calendar Sunday and will be marked as a federal holiday Monday.

Both occasions have links to the three-story building at 800 W. Ninth St. Listed in 1982 on the National Register of Historic Places — it now houses TheFlagandBanner.com. Familiarly known as Arkansas Flag & Banner, the company makes and sells U.S. flags and patriotic regalia along with novelty banners. Embattled Ukraine’s flag, recently added to the inventory, is selling well.

Dedicated in 1918 as Taborian Temple and renamed Taborian Hall in the 1950s, the masonry structure was built by the Black fraternal group Knights and Daughters of the Tabor. It long served as an anchor for five blocks of businesses. That Ninth Street stretch was widely known as “The Line,” denoting the Jim Crow color line faced by Black Americans for many decades.

The hall’s first floor served in 1918 as an informal Negro Soldiers Club for Black service members stationed at what was then called Camp Pike but barred by segregation from the base’s recreational facilities. During World War II, the three floors were turned into a USO club for Black men from renamed Camp Robinson as well as Stuttgart Army Air Field.

As “The Line” was eroded and then erased as social change was followed by construction of the Interstate-630 expressway, Taborian Hall’s clubs went dark by 1970. The vacant building became a refuge for the homeless. A fire possibly set by a vagrant caused the roof to collapse, leaving the building under threat of condemnation and demolition.

It was bought to be renovated in 1992 by Kerry McCoy as headquarters for her budding Arkansas Flag & Banner business, which she developed into a thriving enterprise with a second outlet in Florida. She is determined to restore Dreamland Ballroom to a semblance of its former splendor.

McCoy’s son, Matthew, heads efforts by Friends of Dreamland to return the third-floor space to its onetime role as a social and entertainment venue. Funding for that ambitious project includes 2018 and 2020 grants totaling $999,391 from the U.S. Department of the Interior. One aim of the money is to make the ballroom conform to the Americans With Disabilities Act.

In a brochure, Matthew notes that the challenges to reopening have been daunting, “but the largest obstacle for a business model was the unprofitable nature of the structure itself — a very large, old empty third-floor space with no elevator or running water.” Some of the federal funds have been used to install an elevator. 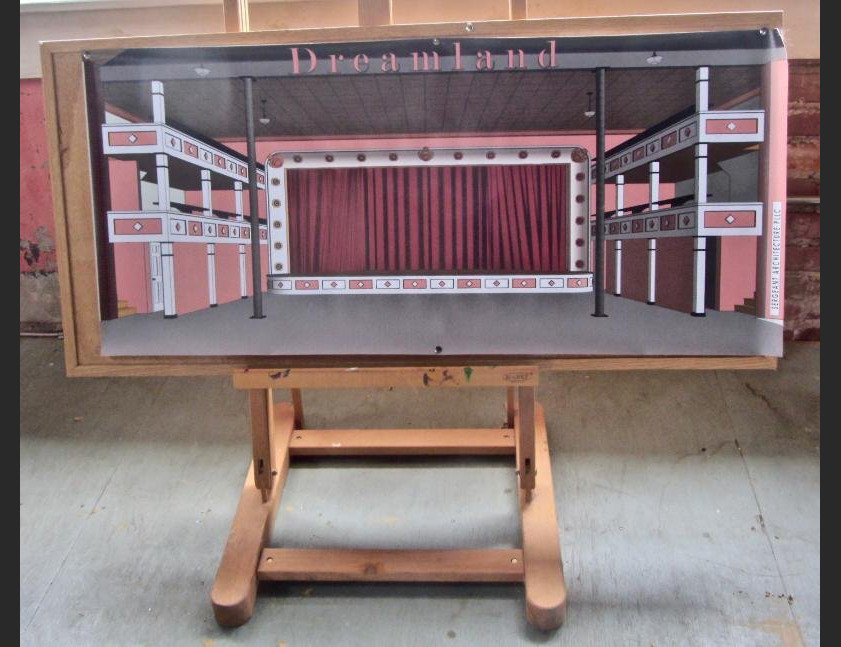 A poster shows how part of a restored Dreamland Ballroom might look. (Special to the Democrat-Gazette/Marcia Schnedler)
Adrienne McNally, the showroom manager, is happy to show visitors around Dreamland, taking the new elevator to the third floor. Partial repairs to the roof are evident, but air conditioning and heating remain lacking. Swathes of pink, shades of blue and other hues that brightened the ballroom are still visible. Evidence of the venue’s use as a nightclub includes an industrial-strength corkscrew mounted on a counter.

Back on the first floor, showrooms are stocked with a panoply of flags, banners and other patriotic merchandise suited for Flag Day and Independence Day. U.S. flags to run up the pole come in 16 sizes, depending on the pole’s height, with the largest fluttering 40 feet by 70 feet.

Along with the national flag of Ukraine in various sizes, the store offers one novelty item “to enjoy a good laugh.” It’a a whoopee cushion emblazoned with the face of Vladimir Putin, priced at $15.99 — with $5 going to aid Ukraine’s Red Cross.