From Dogtown to Tinsel Town: Corbin Pitts, 16, sets the stage for a career in film 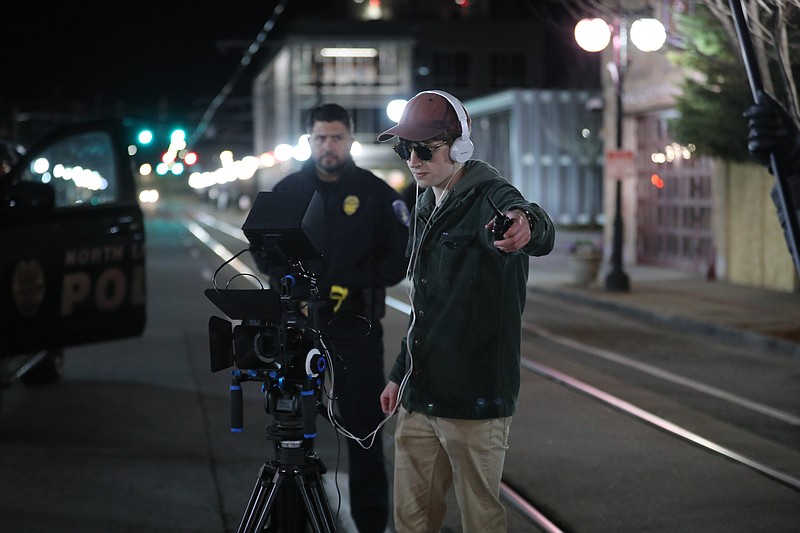 Ask anyone who knows, and they'll tell you the Arkansas film scene is burgeoning as never before. More major film and television projects — to say nothing of dozens of short and independent films — are finding their way to The Natural State where costs are cheaper, people are friendlier and the backdrop is unparalleled by anything in the industry's traditional production centers.

And in the middle of this gathering wave bobs Corbin Pitts, a mild-mannered 16-year-old who is among the state's brightest stars.

"I think the potential for film in Arkansas is just unknown right now," he said. "We just dropped tax in the state and that's why a lot of different companies are coming here. It's a very beautiful state. Southern hospitality is actually a real thing here. The potential is just limitless."

The same can easily be said of Pitts himself. The North Little Rock native began his acting career in commercials at age 5, and 11 years later has a growing resume that includes 18 film and television projects and 14 live theater credits. At age 11, he formed his own production company, Heroe Productions Entertainment, which focuses on film projects written and directed by young filmmakers. And last month, he debuted his first directorial project, "Salad Days," which he also wrote and executive produced.

Not bad for a guy who only recently got a license to drive himself to the set of his own movie.

"I don't really like to consider myself to be exactly one thing," he said. "I just consider myself to be kind of a jack-of-all-trades because I think if I put a label on myself then it just limits me on what people think I can do and what I can't do. I would say I'm an actor and a director, not necessarily putting one in front of the other."

NOT A SIMPLE PROCESS

To hear him tell it, one could get the impression Pitts' path to the silver screen was an altogether logical and deceptively simple process. Land some commercials as a tot, shine in auditions and then work your way up the food chain to increasingly more appetizing roles.

The reality, of course, is a much more arduous process.

"I was 5 years old, and they were looking around town for a boy to play the younger version of the main character in a short film I did 10 years ago called 'Red Courage,'" he said. "The years following that was going to open casting calls in different states. Sometimes the gigs I'd be auditioning for I wouldn't be getting paid for, but I would still be taking road trips for it. My earliest memories are going to New Orleans for feature films."

With time, experience and sheer dogged determination, other roles came his way in more prominent pictures. His most recent project, "Murder at Hollow Creek," put him alongside Jason Patric, Mickey Rourke and other well-known actors.

But his most recognizable role came in the HBO series "True Detective" in the acclaimed drama's third gritty season, shared by Mahershala Ali and Stephen Dorff and directed by Jeremy Saulnier and series creator Nic Pizzolatto.

The exposure and career impact of that are enough to make any actor giddy, but Pitts has learned how to balance the excitement of being in such proximity to established stars. It's all part of being a professional, he said. 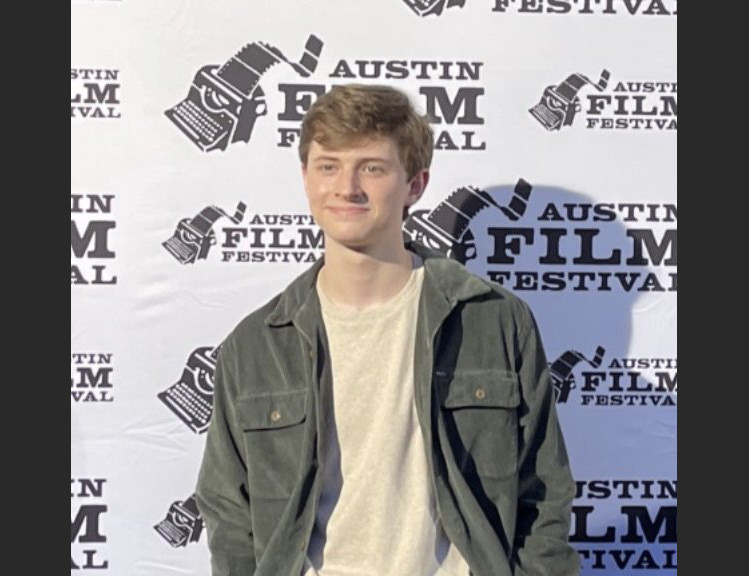 Corbin’s mother, Christen Pitts, took this photo of her son on the red carpet at the world premiere of “Ghosts of the Ozarks,” with Tim Blake Nelson and David Arquette. (Special to the Democrat-Gazette/Christen Pitts)
'JUST A JOB'

"To me it's just a job of mine," he said. "Since I've worked with a lot of well-known and household names, I don't want to say it's desensitized me. Obviously, I have respect for everyone that I'm working with.

Pitts doesn't deny the blessing of being able to do what he loves but says the perception of his relationship to his co-workers is often flawed.

"Not everyone in this industry is coming to you with open arms. In fact, most of the time it's very stand-offish," he said. "You came here to do one thing and one thing only. And sometimes you meet great people who are wanting to take you under their wing and mentor you. Fortunately for me, I have a lot of those people in my life."

Daniel Campbell, a North Little Rock-based writer and director who has known and worked with Pitts for a decade, said the teenager's sense of professionalism is a standout quality.

"I've known Corbin, I believe, since his first acting gig," Campbell said. "I was an assistant director on a film years and years ago and Corbin showed up with his parents and his sister and he just knocked it out of the park.

"He is just unbelievably driven for his age. Through the years, as we would work on different projects together, he would show up on set for a role and there was always such a seriousness to him. He never approached it with a kid's mind-set. He came into it, even at that age, just ready to roll with a professional mind-set of 'this is what I want to do.'"

There are a lot of assumptions that tend to ride shotgun on a story like Pitts'. One is there must be some maniacal stage parent shoving him in front of the camera or kicking him out onto the stage. Another is the peer response to his work must be heady stuff, especially on a cultural phenomenon such as "True Detective."

Like many assumptions, the truth is often much different. No, his parents did not and do not force him to follow this path, he said.

Pitts says he keeps himself grounded by doing so-called normal teen things with his friends and staying involved with his work.

"It's been a little crazy," he said. "For most people, they complain about how covid threw them off. I'll admit, it did shake my world up a little bit, but it made me more creative. It made me write more material.

"If there is something that's kept me grounded it's creating. I'm half virtual and I half go to school, but people think since I'm half virtual that I just sit around all day. It's quite the contrary. I fill my day up. I have meetings with people. I meet with people about film. I'm doing auditions."

Pitts views his first foray into directing as the next natural step in his progression as an artist, calling "Salad Days" one of the most difficult things he has ever done.

"It never really was that one day I just woke up and I wanted to do it. It was more of a slow burn," he said. "I used to grab disposable cameras from the CVS and I would just walk around my neighborhood with them. Then I would take old cameras that my mom used to take home videos with and make little videos with my friends.

"I didn't quite realize how hard it was making a film until you actually go and make a film. I went from shooting with one friend to having everyone that I know help out with it and having an event for it and it being streamed. It's kind of surreal." 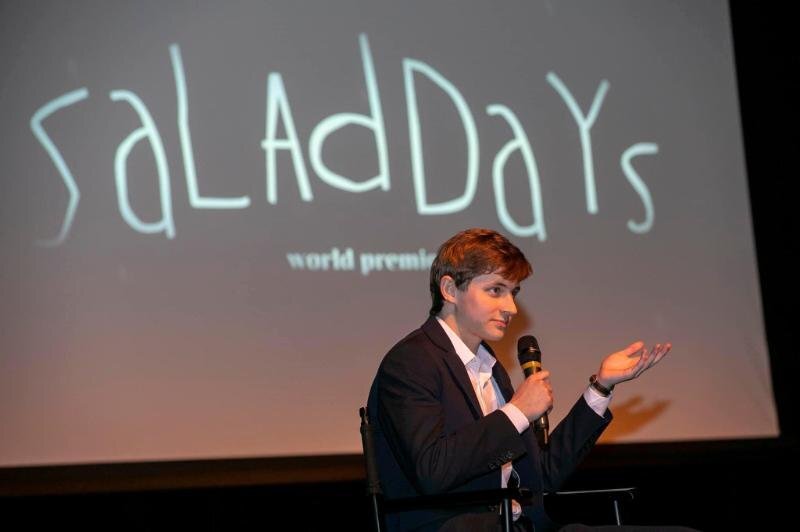 Corbin Pitts takes part in a question-and-answer session following the premiere of “Salad Days.” The North Little Rock native is an actor, director and producer at the age of 16. (Special to the Democrat-Gazette/Warren McCullough)
GIVES FEW HINTS

The movie, which tells the story of a family struggling to cope with internal tensions and loss, gives few hints that a high school sophomore was at the helm of direction and production. The professionalism of the finished product also belies the lack of funding and resources of its rookie director.

"I was a little bit naive before shooting this film, thinking if I plan everything out from how much money we're going to be spending on craft services to how much money it is to rent out a location, then this should go smooth sailing," he said. "That was far from the truth. I planned the heck out of this and it was still hard. We shot a car chase scene and half my crew wasn't there. It was just me and one of my best friends who's also 16."

The guerilla nature of the project permeated every aspect of shooting and post production.

"People think there is a whole production team behind me and there wasn't," he said. "I had two other friends who helped me out with this film. One ran sound and one was a production assistant. There would be days where there would just be me and one other guy.

"The majority of the stuff that you see in the film is just made by kids on a shoestring budget. There is no money here and a lot of people think there were a ton of people involved. There really weren't. It wasn't like we had an actual equipment van with three different semi-trucks of lights. We would haul around all the equipment in my mom's Tahoe."

Pitts may one day look back on the experience with nostalgia, but right now he's just happy to have it done. He'll need more time to let the more stressful elements of directing his first film soften around the edges.

"It sounds fun on paper, but it is the hardest thing I've ever done, ever, ever, ever," he said. "It was like walking blind into a room filled with traps and you don't know where the traps are lying. It's just terrifying. Especially when you have a scene with so many different people and you think what if this doesn't work out? Maybe these people will never want to work with me again. Your mind's just filled with all the possibilities and the negatives."

With "Salad Days" wrapped and released, Pitts is left to ponder what comes next and on that question the answer is a shrug and a "We'll see." Spending a decade in this business has helped him learn to take things as they come and not always as he would like them to be. It's just the nature of life in show business.

"I'm going to be honest, I don't know what the plan is right now," he said. "Life as an actor is so sporadic. One week you think you're going to be in a $90 million film and live in Canada for a year, then the next week you're like, 'I didn't get it.' I have had a lot of those experiences and it is a weird thing to go from the verge of stardom and then not, on the flip of a dime."

This reality also makes it hard to predict which path he is more likely to follow in the future, acting or directing. But having done both gives him valuable insights for making the appropriate decision when opportunities present themselves.

"The path for an actor and a director are two different things," he said. "An actor, no matter how good of a performance you give, often won't lead to anything. I've done many films and obviously I've given my best in every single film and there were times nothing came of it."

"As a director you put your all into it, it's great, people start recognizing it's great, and that may very well lead you to bigger things. I'm not saying that happens with everyone, because there's a lot of people that I know that are very talented in what they do and they've never gotten anywhere. But that's kind of the plan. There's kind of a path, I would say."