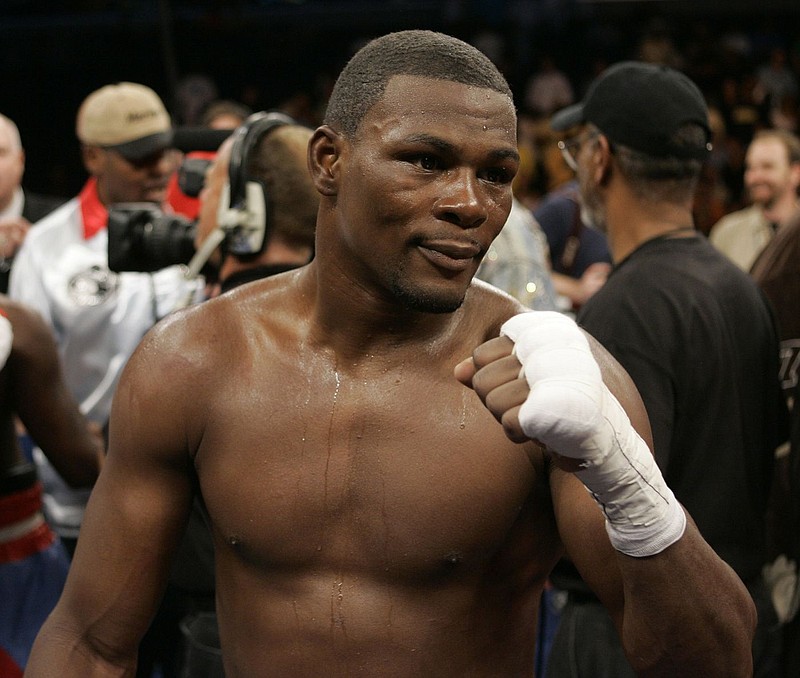 Jermain Taylor poses after winning by split decision over Cory Spinks in 2007.

Two weeks before Jermain Taylor is scheduled to stand trial on felony domestic violence charges, the former boxing champ avoided jail after his neighbor testified Monday that he called and texted a woman who has accused the Arkansas Sports Hall of Famer of domestic violence without Taylor knowing.

Deputy prosecutor Reese Lancaster had called for Taylor's arrest, asserting that the contact violated a court order barring Taylor from contacting the woman either directly or through intermediaries. He told the judge the contact was either an intimidation attempt or an effort to influence her testimony.

"Suspicious" and furious Pulaski County Circuit Judge Leon Johnson declined to jail the Olympic bronze medal winner after the neighbor testified that he reached out to the woman by phone in a drunken moment without Taylor's knowledge.

"This is very suspicious. If she doesn't show up [for the June 28 jury trial], I'm not dismissing the case," Johnson said, telling Taylor he'll go to jail if the woman does not appear.

Neighbor Michael Burnett, presented by defense attorney Lou Marczuk, testified that he had called the woman in a drunken moment on June 5 after having spent some time visiting with Taylor.

Burnett said he knew the woman from her days dating Taylor, telling the judge he had not seen her in years and had not talked to her by phone in at least six months. He denied calling the woman a second time, contradicting her report to the police.

"Why would you call the woman, just out of the blue?" the judge asked, reminding Burnett that lying under oath could get him charged with perjury. "What were you going to talk to her about?"

Taylor's accuser, Labiba Sutton, 43, notified police about the phone call as a violation of the judge's no-contact order, telling investigators that she got a call from Taylor's neighbor, who said, "Hey, Jermain wants to talk to you."

Sutton hung up because of the no-contact order then got a text message stating: "You hung up on me?" She responded: "lost the signal," prosecutors state in court filings. Sutton said the neighbor called back but she did not answer. She was not called to testify on Monday; neither was Taylor.

Johnson ordered Taylor's arrest on Friday, and Taylor attempted to surrender to the jail on Sunday, but the necessary paperwork had not yet been provided to the sheriff's office so he was not taken into custody, Taylor's lawyer said.

Sutton, then known as Labiba Higgins, was Taylor's girlfriend in August 2018 when a report of a disturbance brought Little Rock police to his Azalea Drive home.

Officers arrived to find Taylor outside with some friends. He declined to speak with police, directing them to talk to whoever was in his house.

"[Sutton] mouthed to officers 'Help me' while Taylor was still around," the report states. "Officers observed minor injuries to Sutton's chin, mouth, neck and right arm."

Taylor was arrested after Sutton told investigators he attacked her after she spoke to another man at the house.

The couple had been outside drinking with their neighbors, but she had left to get more alcohol. When she returned with the beverages, a man -- not named in the report -- thanked her and she replied, "Any time."

About a week after the disturbance, Sutton obtained a civil order of protection, barring Taylor from contacting her for seven months.

In her sworn statement to the court, the North Little Rock woman described a 10-month relationship with Taylor that began in October 2017 and ended with his arrest.

Sutton stated that Taylor has threatened her life before and that he's also threatened to kill her teenage son.

"He got mad and said he will kill me," Sutton wrote. "This happens every time we have a verbal altercation. Has also threatened to put a bullet in my head and my 15-year-old son would be [second]."

In describing the events that led to Taylor's arrest, Sutton said in her statement to the court:

"He got mad and he strangled me and he hit my head against the wall over and over," she said. "He hit me in the leg with a closed fist. He slapped me on my face multiple times.

"He strangled [me] again until I was unconscious. He said, 'You deserve to die, b***h.' He got the [machete] out of the case and walk [sic] towards me with it, and I begged him not to kill me. He stopped, put the knife down. He dragged me by my hair and started slapping me with an open hand. He was spitting on me."

Taylor spent the night in jail before posting a $15,000 bond to be released. The 43-year-old faces up to 30 years in prison on the resulting felony charges of aggravated assault on a family or household member and first-degree terroristic threatening along with misdemeanor domestic battering.

A guilty verdict carries the potential of additional prison time if the court finds Taylor violated the conditions of the six-year suspended sentence he received in May 2016 after pleading guilty to nine felony counts of second-degree battery, aggravated assault and terroristic threatening.

Those charges stemmed from a trio of arrests over a nine-month span between August 2014 and May 2015 for shooting his cousin in the leg, punching a fellow patient while in a drug rehabilitation center and threatening a family in the presence of three children by shooting a pistol in the air at Little Rock's Martin Luther King Jr. parade.

Lawsuits related to those incidents were settled out of court.

Taylor also has new legal woes. In April, 47-year-old Corvette Miller of North Little Rock sued Taylor in Pulaski County Circuit Court under Taylor's birth name, Lecester Jermain Taylor, for battery and negligence, claiming that Taylor had punched him in the head during a Nov. 26, 2021, card game at Taylor's residence.

According to the three-page suit, Taylor and Miller were part of a group playing cards when Taylor "got upset and started accusing others of cheating."

Miller claims Taylor struck him in the head when he went to leave, injuring him, the suit states. Miller wants compensation for his pain and suffering, medical costs and lost wages, plus any future expenses incurred due to the injury. He's further seeking punitive damages.

A survey of police departments in Little Rock, North Little Rock, Maumelle, Jacksonville and Sherwood show no such incident was reported to those agencies.

Print Headline: Olympic-medal boxer from Little Rock allowed to remain out on bond