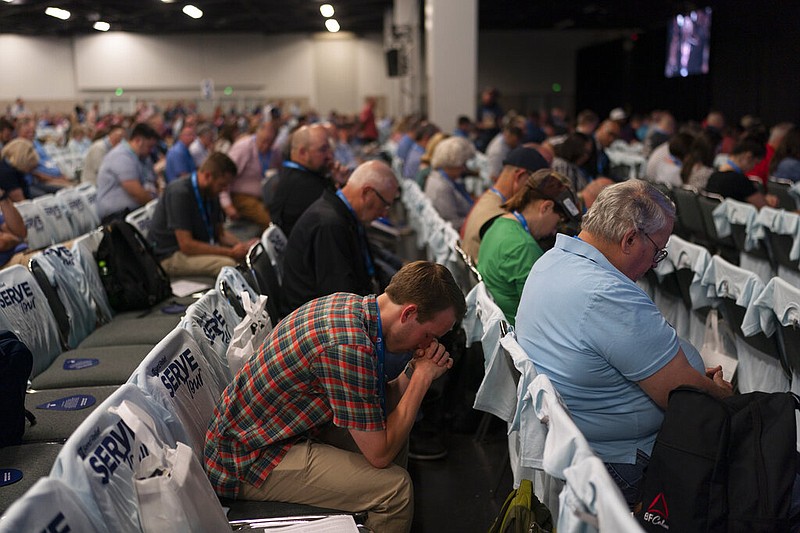 The vote came hours after Baptists approved the recommendations of the Sex Abuse Task Force, which included creation of a database containing the names of current or former Baptist ministers, missionaries and others who have been credibly accused of sexual abuse.

When the results were announced, shortly after 7:30 p.m. Pacific, the convention hall erupted in applause.

Ascol, favored by Baptists who want to move their denomination further to the right, had adopted the campaign theme "change the direction."

Barber, on the other hand, urged fellow Baptists to set their differences aside and focus on the gospel, calling on "an army of peacemakers" to help unify the 13.7 million-member body.

That included 285 Arkansans, including a large contingent from Central Baptist Church in Jonesboro, where Barber's sister, Traci Smith, attends. Barber is a native of Lake City in Craighead County.

Brad Lewter, pastor of Grand Avenue Baptist Church in Fort Smith, voted for Barber, calling him "the right man for this time."

"I think he's a peacemaker. He's a unifier. Our convention is divided right now. ... I believe he's got a spirit of kindness, which is what we desperately need right now," Lewter said.

"He's a pastor. ... He's got academic credentials but he's also a thinker. I think he's just very thoughtful, so what he'll say will be tempered with a good view of the Bible and a good view of history. To me that kind of temperance in this moment is important," he said.

Barber, who chaired the convention's committee on resolutions, nearly was elected on the first ballot, capturing 47.58% of the vote.

Traci Smith arrived at the convention center at 6:25 a.m. Tuesday and stuck around until the final vote tallies were announced.

"People were excited," she said.

After the vote was announced, Ascol told Barber he would be praying for him and the two men shook hands, she said.

She predicted her brother would serve the convention well.

"I think, in light of all the things that have happened over the last year, he's the perfect person to lead," she said.

Barber was 5 years old when he responded to the altar call at Bethabara Baptist Church, a small congregation on the east side of the St. Francis River, roughly 4 miles north of Lake City. He was 11 when he first felt the call to ministry, a call that was confirmed while attending summer church camp three years later.

While still in high school, he was "licensed to preach the Gospel" by First Baptist Church in Lake City.

Barber preached his first sermon while in high school and soon was asked to serve as interim pastor at New Hope Baptist Church near Black Oak, according to Smith, his sister.

Barber went to Texas to attend Baylor University, preaching at a small country church on the weekends.

He's been ministering ever since.

Barber's campaign was followed by friends and family back in Arkansas, including Pat Qualls, his former piano teacher.

"He always said, from day one, 'I'm gonna be a preacher,' and he never wavered from that," she said.

With Barber as president, the convention will be getting "a peacemaker," somebody who will "try to get people to come together and fix the mistakes," she said.

"I just think he has the right attributes, the right motivation and the right attitude to do what the Southern Baptist Convention needs," she added.

"All four of those guys are great guys," he said. "No matter which one of these guys gets it, we're in good shape."

Earlier Tuesday, the messengers had voted overwhelmingly to approve the recommendations of their denomination's sex abuse task force, showing their support for creation of a "Ministry Check" database and a process for compiling information about ministers, denominational employees, church workers and volunteers who have been credibly accused of sexual abuse.

The task force had also recommended creation of a new Abuse Reform Implementation Task Force, to help oversee implementation of the recommendations.

As the incoming convention president, Barber will be responsible for appointing the new task force members.

At a news conference earlier in the evening, the task force's chairman, Bruce Frank of Arden, N.C., had emphasized the importance of the presidential race, noting the winner's ability to shape the Abuse Reform Implementation Task Force.

Messengers who approved the recommendations did so by holding their ballots in the air. The vote was so lopsided that there was no need to complete a formal tally.

Tuesday's vote was a vindication for those who had urged the convention, for years, to address the problem of sex abuse within Southern Baptist churches, she said.

Survivors, seeing those ballots raised, should recognize "That's me being believed and that's the impact that my voice can have," she said.

At last year's annual meeting, messengers called for an independent investigation of the convention's past handling of sex abuse allegations, requesting that the denomination's executive committee waive attorney-client privilege and give investigators access to documents that would otherwise have been privileged.

Last month, Guidepost Solutions, the firm that completed the study, released a 288-page report that was critical of past convention leaders.

For many years "a few senior [executive committee] leaders, along with outside counsel, largely controlled the [executive committee's] response to these reports of abuse ... and were singularly focused on avoiding liability for the SBC," the report said.

"In service of this goal, survivors and others who reported abuse were ignored, disbelieved, or met with the constant refrain that the SBC could take no action due to its polity regarding church autonomy – even if it meant that convicted molesters continued in ministry with no notice or warning to their current church or congregation," the report stated.

Floyd and several other officials resigned in October, warning that the decision would expose the denomination to potential liability.

Following the release of the Guidepost Solutions report, the executive committee released a list of 585 Baptist clergy and laymen who had been accused of abuse. Most of the information had been collected from newspaper reports. The list identified at least 15 current or former Arkansans who had committed sexual abuse or failed to report it as required by law.

Advocates for sex abuse survivors have argued that the document is just the tip of the iceberg, noting that most instances of abuse are never reported to authorities.