Souped-up summer: 4 recipes that make the most of fresh vegetables 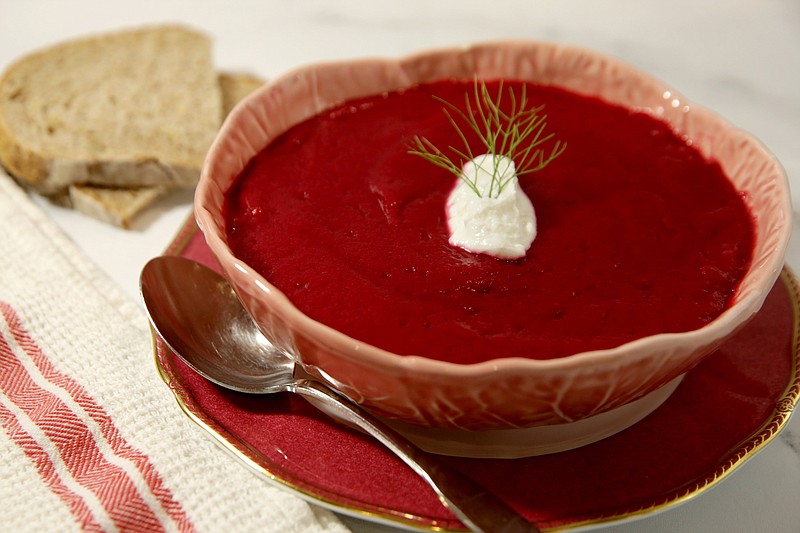 When the produce at your local store, farmers market or your own garden is at its peak, it's time to make fresh vegetables the star of your meal.

It's time to make summertime soups.

In the summer, you want to make the most out of your produce by bringing out its flavor in the most pure and natural way. The fewer adornments, the less complexity, the better. Other flavors should not distract you from the garden-fresh goodness of your bounty.

In other words, summertime soups are delicious and easy to make. Win-win.

I recently made four summertime soups. Only one of them was chilled, but each, in its own way, was unforgettable.

We'll start with the chilled soup first. It's called Beet-Fennel-Ginger Soup, and along with beets, fennel and ginger it is also made with cabbage and vegetable stock.

OK, it's borshch. But this version is made without meat, so it is a hearty vegetarian meal — or vegan, if you forgo the dollop of yogurt on top. While it still has the sweetly earthy undertone that comes from the beets, it is also enlivened by the exotic, anise taste of fennel and the finishing warm bite of ginger.

When pureed together — and these recipes are going to require a lot of pureeing — the ingredients become better than their individual parts. The soup is also light and smooth, perfect for a warm summer's evening.

I went the elegant route for my next effort, Asparagus and Shiitake Mushroom Soup. The recipe came from the now-sadly-closed Trellis restaurant, which in its heyday was one of the best restaurants in Virginia.

The soup that results is magnificently subtle, playing the delicate, fresh springlike taste of asparagus off the satisfying umami burr of the shiitake mushrooms.

As befits the restaurant that also created the dessert called Death By Chocolate, this soup is not for people counting their Weight Watchers' points. A rich roux turns the texture of the soup to velvet, and the flavors are all tied together by a cup of heavy cream.

I used half-and-half to save a few calories. That way, I felt virtuous and healthful, even though I wasn't.

My next soup also came from a famous restaurant. Cream of Zucchini and Almond Soup was a dish served at the Walnut Room in the flagship State Street location of the Marshall Field's store in Chicago.

And again I am in awe at the creativity of chefs.

Who would ever think to combine the grassiness of zucchini with the warm, nutty crunch of almonds? And then who would think to put it together in a cream soup?

But that's not where the brilliance of this dish ends. The soup stands out because of the subtle inclusion of sweet spice: a restrained mixture of brown sugar, cinnamon and nutmeg.

It's a soup unlike any you've had before, unless you've been to the Walnut Room.

My last soup is the easiest of them all to make. Sweet Pea Soup also has the freshest taste — even though it uses frozen peas.

You could use fresh peas — if you can find them.

All you do is simmer together the peas, some sweet red pepper, a hunk of onion and a carrot in chicken stock, vegetable stock or even ham stock. When the vegetables are thoroughly cooked, but just barely, you puree it to a silky smooth texture.

Salt it generously and serve it, if you want, with croutons or crumbled bacon.

I used both. It seemed like a summery thing to do.

Combine the beets, cabbage, fennel, garlic, ginger and 6 cups of the stock in a large soup pot and bring to a boil. Cover, reduce the heat to medium low, and simmer until the vegetables are tender, about 25 minutes.

Strain the soup through a large-mesh sieve. Puree the vegetables in 1 cup of the heated broth in a food processor or blender until smooth (you may have to do this in batches). Add the remaining heated broth, and blend. If the soup is not of a pourable consistency, add some of the remaining 2 cups of broth until it reaches your desired texture.

Chill at least 2 hours before serving. Season with salt and pepper. Serve in chilled bowls, if desired, with yogurt and fennel sprigs. 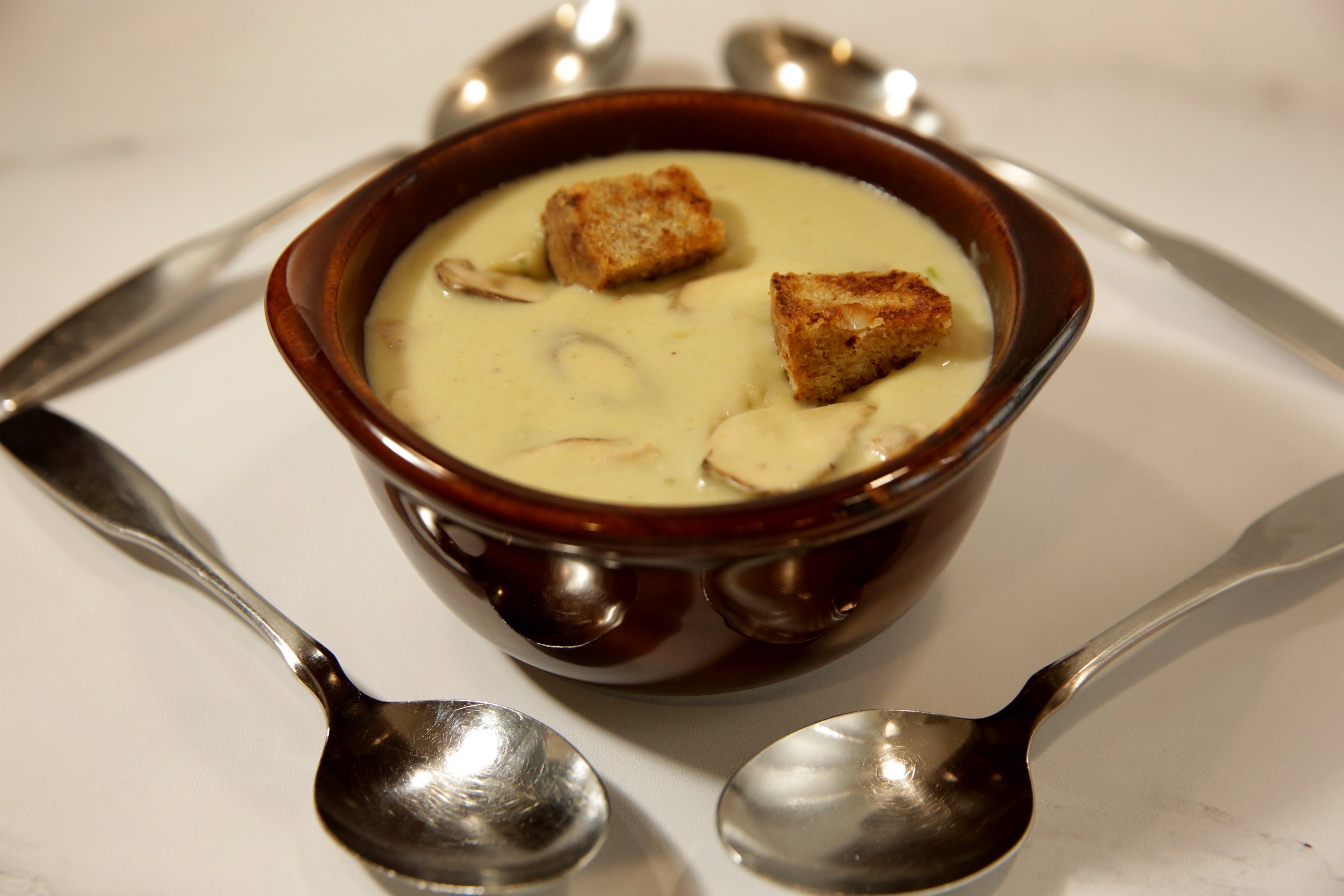 Bring 3 quarts of salted water to a boil.

Fill a large bowl with ice and water; set aside.

Trim the woody stem off each stalk of asparagus, and reserve. Lightly peel half the number of stalks. Chop the reserved ends and the remaining unpeeled asparagus into ¼-inch pieces. Cover with plastic wrap and refrigerate until needed. Blanch the peeled asparagus in the boiling water. Do not overcook; the asparagus should be cooked yet remain crisp. Transfer the blanched asparagus to the ice water.

When the blanched asparagus is cool, cut into ¾-inch pieces. Cover with plastic wrap and refrigerate until needed.

Remove and chop the mushroom stems. Slice and reserve the caps.

Heat the vegetable oil and 1 tablespoon water in a large saucepan over medium heat. When hot, add the chopped (¼-inch) asparagus, mushroom stems, celery, leeks and onion. Season with salt and pepper and saute until the onions are translucent, 5 to 7 minutes. Add the chicken stock and bring to a boil.

While the chicken stock is heating, melt the butter in a separate large saucepan over low heat. Add the flour to make a roux and cook, stirring constantly, until the roux bubbles, 6 to 8 minutes. Strain 4 cups boiling stock into the roux and whisk vigorously until smooth. Add the remaining stock and vegetables. Whisk until well combined. Lower the heat and simmer for 10 minutes.

Puree in a blender or a food processor. Strain into a 5-quart saucepan and return to low heat. Hold at a simmer for a few minutes while completing the recipe (Note: If you are not going to serve the soup within 1 hour, do not complete the next step until ready to serve; otherwise, the delicate flavor and color of the asparagus will be dissipated).

Heat the cream, sliced shiitakes and ¾-inch asparagus pieces in a nonstick saute pan over medium heat. When hot, add to the soup and adjust the seasoning. Serve immediately. (This soup can be held hot in a double boiler for up to 1 hour.)

Recipe from "The Trellis Cookbook" by Marcel Desaulniers 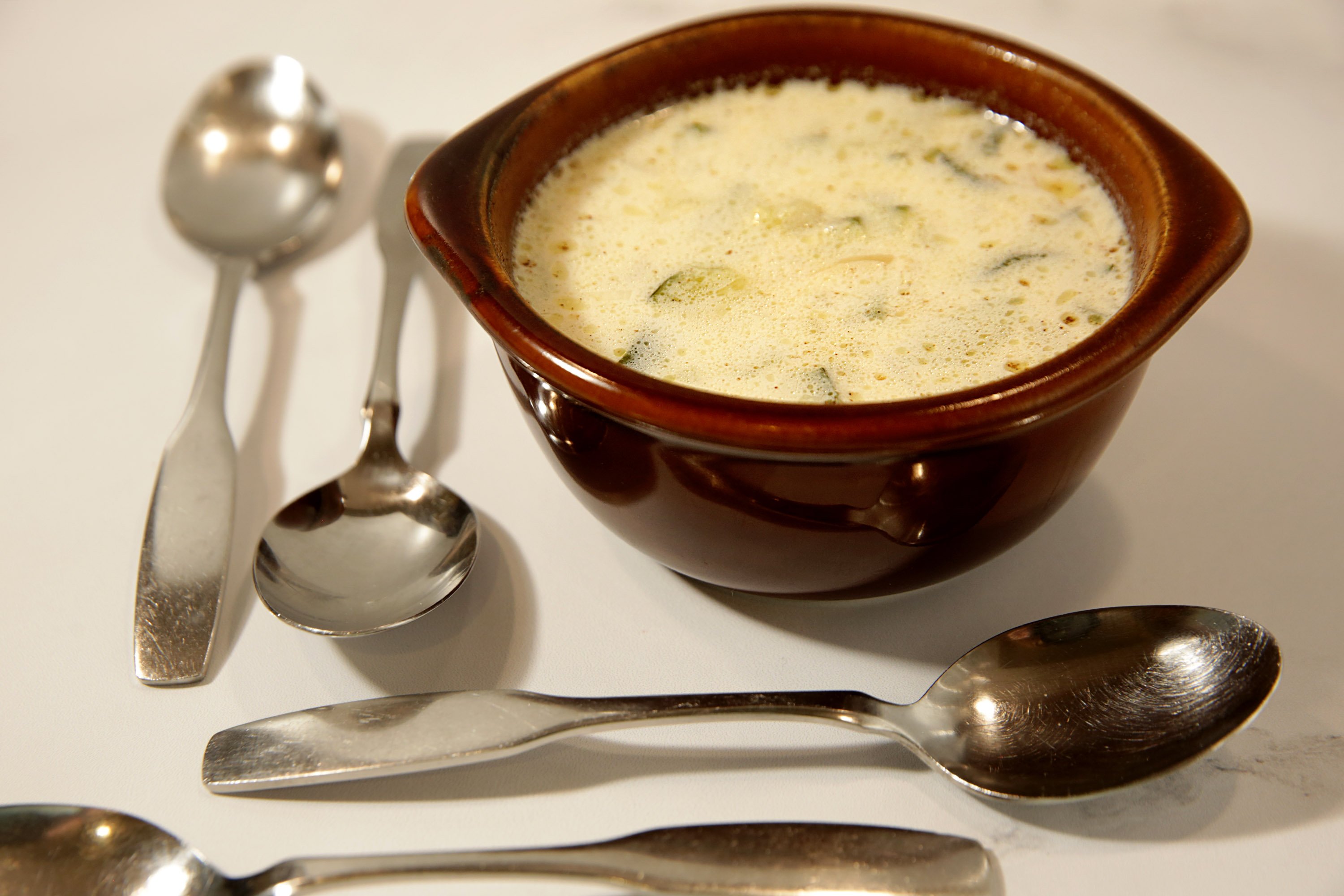 Adapted from "Marshall Field's Gourmet: A Taste of Tradition" 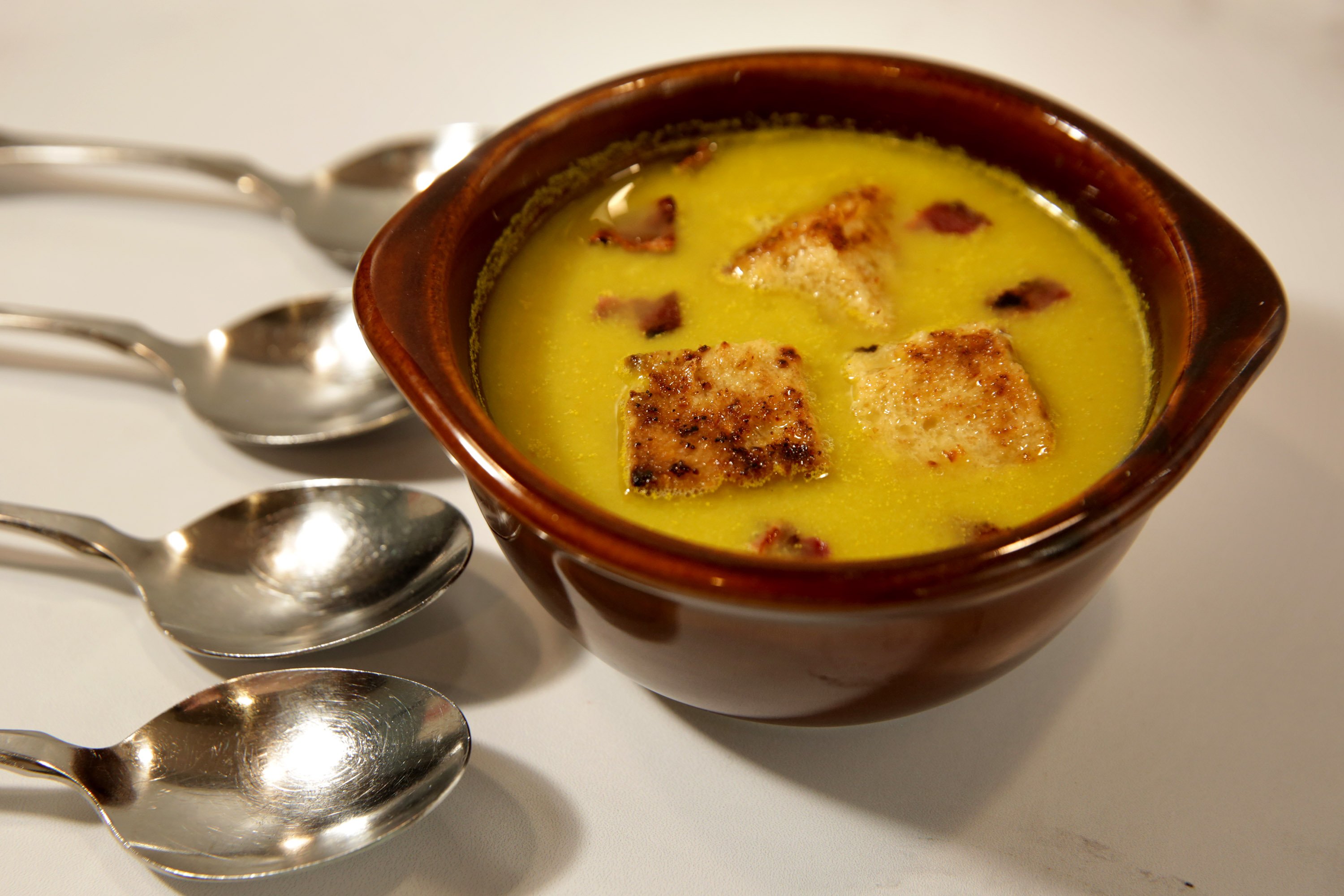 Heat oil in a medium saucepan over medium-high heat. Add onion, bell pepper and carrot. Cook, stirring frequently, until onion is translucent, 3 to 5 minutes. Add stock and simmer 5 minutes. Add peas and cook until peas are heated through, 1 minute for frozen and 3 to 5 minutes for fresh. Add salt to taste. Puree in a blender until smooth. Serve with croutons and crumbled bacon, if desired.