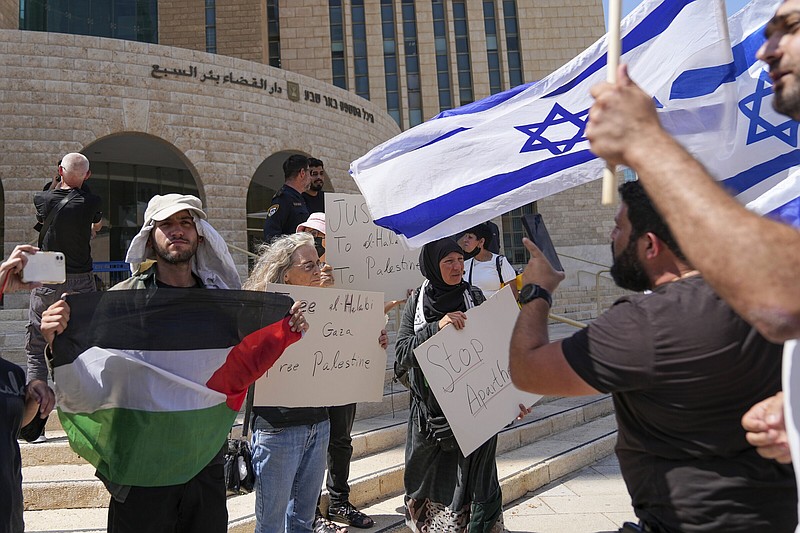 Supporters of Mohammed el-Halabi hold a Palestinian flag and placards as protesters wave Israeli flags on Wednesday, outside the district court in the southern Israeli city of Beersheba. (AP/Tsafrir Abayov)

BEERSHEBA, Israel -- An Israeli court on Wednesday found a Gaza aid worker guilty of several terrorism charges in a high-profile case in which his employer, independent auditors and the Australian government say they have found no evidence of wrongdoing.

Mohammed el-Halabi, the Gaza director for the international Christian charity World Vision, was arrested in 2016 and accused of diverting tens of millions of dollars to the Islamic militant group Hamas that rules the territory. The trial, and his prolonged detention, have further strained relations between Israel and humanitarian organizations that provide aid to Palestinians.

Both he and World Vision have denied the allegations and an independent audit in 2017 also found no evidence of support for Hamas. His lawyer, Maher Hanna, has said el-Halabi turned down several plea bargain offers on principle that would have allowed him to walk free.

El-Halabi has not yet been sentenced. World Vision said he would appeal the ruling, which was largely based on classified information that has not been made public but was shared with the defense.

The district court in the southern Israeli city of Beersheba said el-Halabi was guilty of several charges, including membership in a terror organization, providing information to a terror group, taking part in militant exercises and carrying a weapon.

MOSCOW -- Opposition politician Alexei Navalny confirmed Wednesday that he was transferred to another prison and in quarantine.

Navalny wrote on the Telegram messaging app that he was moved to the maximum security IK-6 prison in the Vladimir region village of Melekhovo, about 155 miles east of Moscow.

Navalny, a political foe of Russian President Vladimir Putin, previously was held at the IK-2 penal colony in the Vladimir region. The facility in the town of Pokrov stands out among Russian penitentiaries for its especially strict inmate routines, which include standing at attention for hours. IK-6 is about 90 miles to its east.

He said he was confined in a "strict regime" and in quarantine, but didn't say why or what his conditions were.

Navalny was arrested in January 2021 upon returning from Germany, where he had been recuperating from nerve-agent poisoning he blamed on the Kremlin. He received a 2½-year sentence for allegedly violating the conditions of his parole while outside Russia.

In March, Navalny was sentenced to nine years in prison on charges of fraud and contempt of court, allegations he rejected as a politically motivated attempt by Russian authorties to keep him behind bars for as long as possible.

PHNOM PENH, Cambodia -- Prime Minister Hun Sen's Cambodian People's Party has sued the vice president of the opposition Candlelight Party for $1 million in compensation for comments he made in an online interview alleging that this month's local elections were unfair, a spokesman for the governing party said.

A lawyer for the Cambodian People's Party filed the lawsuit on Tuesday against Son Chhay for saying that the nationwide commune elections were unfree as well as unfair, according to documents filed with the Phnom Penh municipal court.

Son Chhay charged that the National Election Committee was biased in favor of the governing party and that there had been vote-buying and intimidation of voters. His allegations have been denied by the government.

"Son Chhay's comments spread false information with malicious intent and were slanderous, which was seriously damaging to the reputation of the Cambodian People's Party, which won the election," said the complaint filed by the lawyer, Ky Tech.

ATALAIA DO NORTE, Brazil -- A federal police investigator said Wednesday night a suspect confessed to fatally shooting an Indigenous expert and a journalist in a remote part of the Amazon and took officers to where the bodies were buried.

Police said at a news conference in the Amazon city of Manaus that the prime suspect in the case confessed Tuesday night and detailed what happened to the pair who went missing June 5.

Torres said Pelado took police to a spot Wednesday where they recovered human remains. The remains had not yet been positively identified, Torres said.

"We found the bodies [nearly two miles] into the woods," the investigator said.

He said other arrests would be made soon in the case.

Pereira, 41, and Phillips, 57, were last seen on their boat in a river near the entrance of the Javari Valley Indigenous Territory, which borders Peru and Colombia. 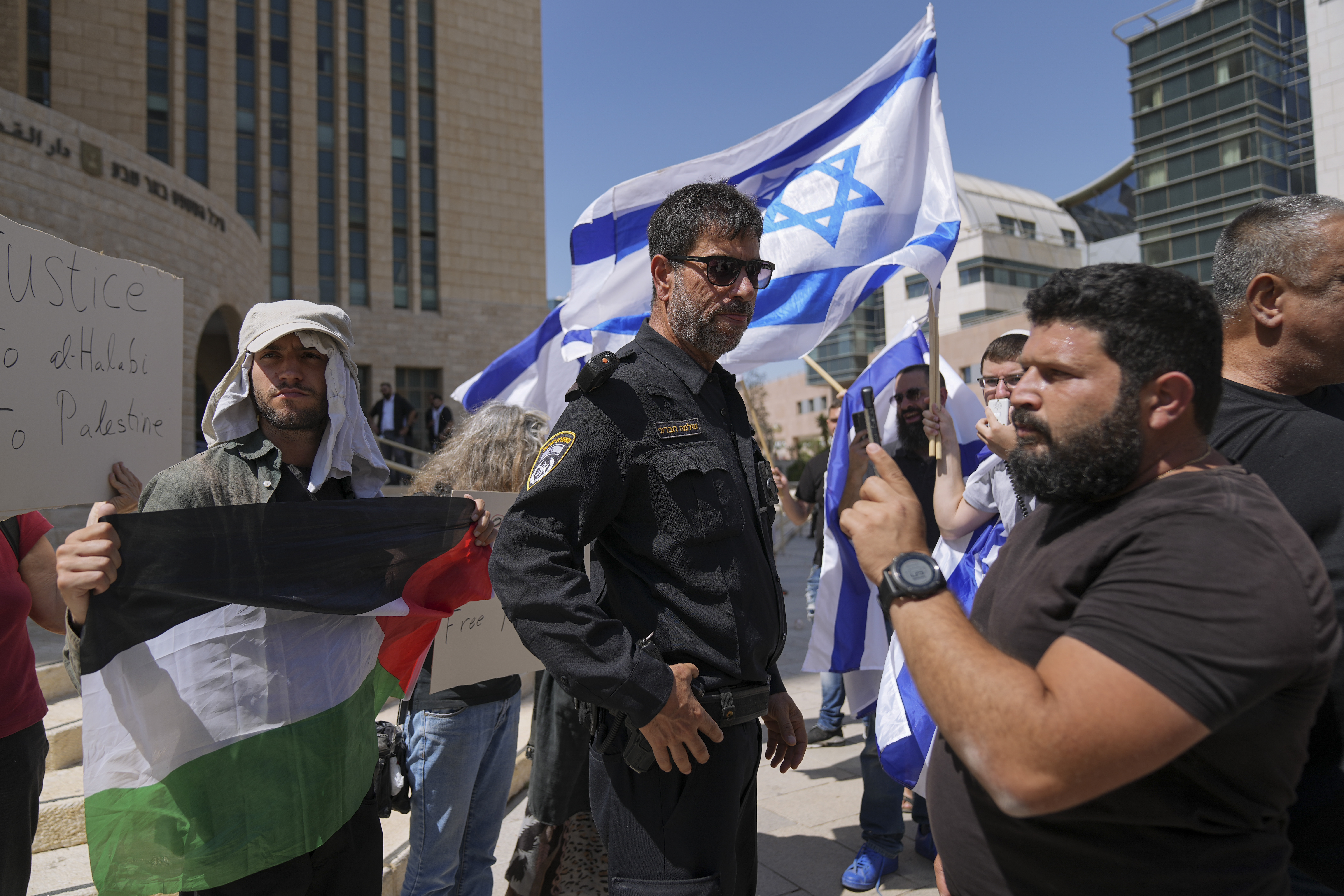 Supporters of Mohammed el-Halabi hold a Palestinian flag and placards as protesters wave Israeli flags, outside the district court in the southern Israeli city of Beersheba, Wednesday, June 15, 2022. The court found the Gaza aid worker guilty of several terrorism charges. El-Halabi, who was the Gaza director for the Christian charity World Vision from 2014 until his arrest in 2016, was accused of diverting tens of millions of dollars to the Islamic militant group Hamas that rules the territory. Both el-Halabi and World Vision have denied any wrongdoing, and an independent audit in 2017 also found no evidence of support for Hamas. (AP Photo/Tsafrir Abayov) 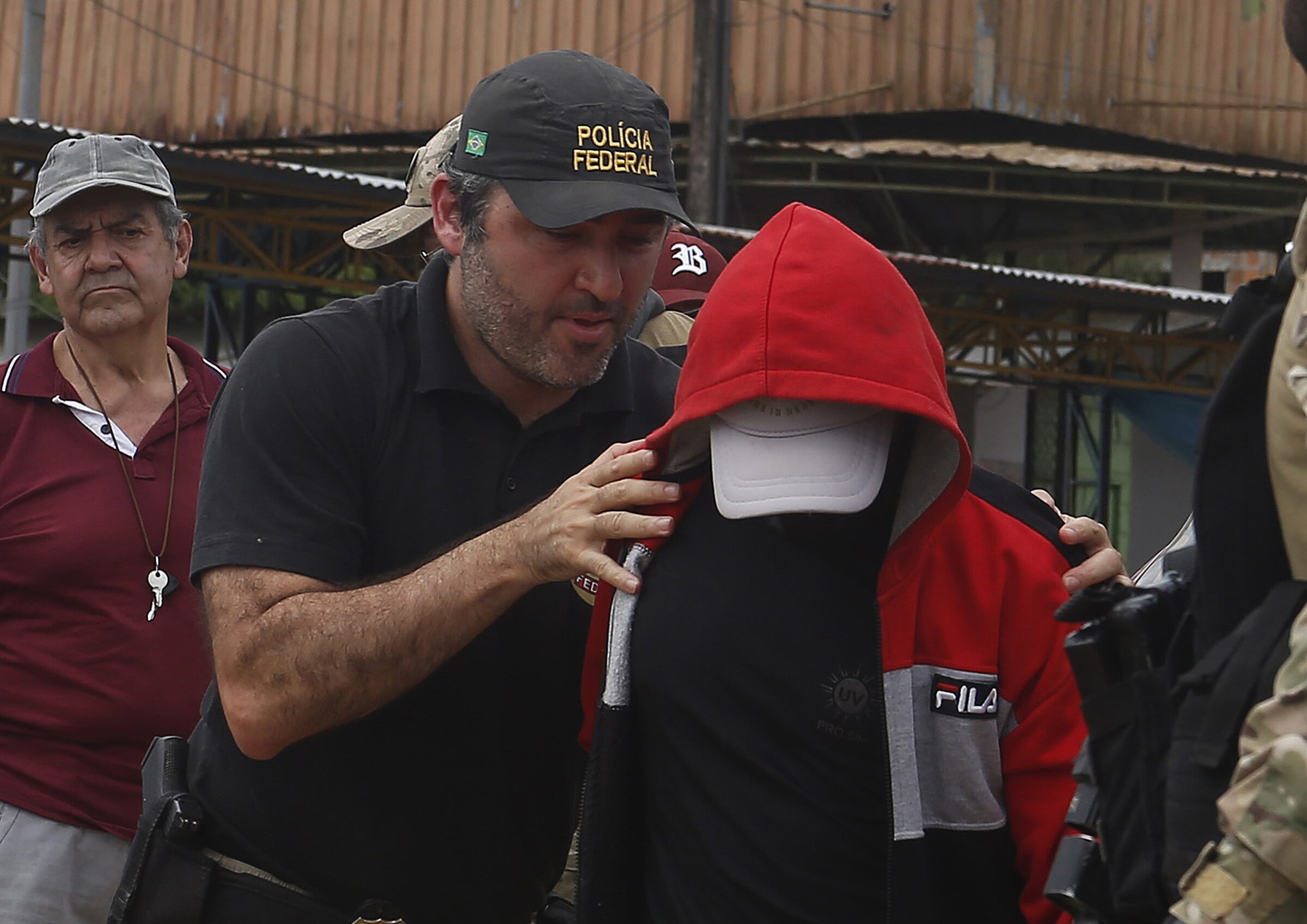 A federal police officer escorts a suspect on Wednesday toward a river in the area where Indigenous expert Bruno Pereira and freelance British journalist Dom Phillips disappeared in Atalaia do Norte, Brazil. (AP/Edmar Barros)