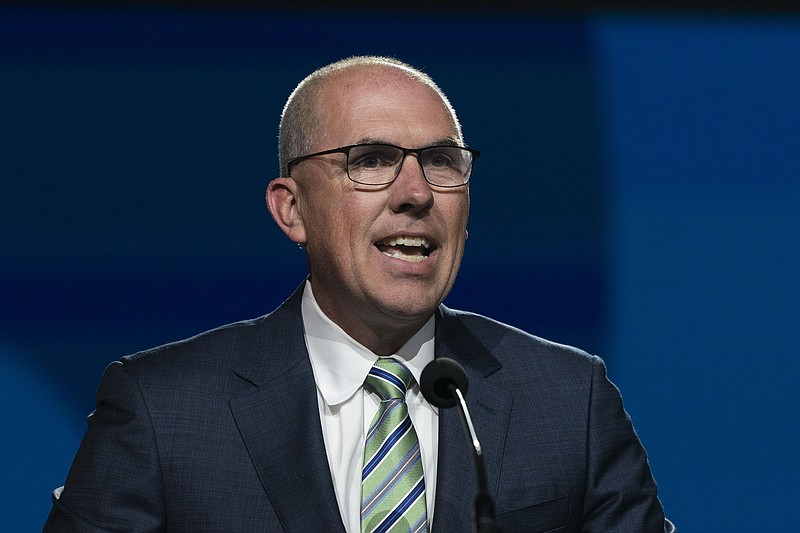 ANAHEIM, Calif. -- Attendees at the Southern Baptist Convention's annual meeting passed a resolution Wednesday encouraging state lawmakers to make it a crime for pastors to sexually abuse their parishioners.

The Baptists also passed a resolution publicly apologizing to survivors of sexual abuse and another urging the U.S. Supreme Court to overturn Roe v. Wade, the 1973 Supreme Court opinion classifying abortion as a constitutional right.

An attempt to abolish the agency that lobbies on behalf of Southern Baptists in Washington failed.

The resolutions addressing sex abuse were adopted one day after the convention overwhelmingly approved recommendations made by the denomination's sexual abuse task force, which called for creation of a database containing the names of church leaders and volunteers who have credibly been accused of sexual abuse.

Noting that many states and their licensing boards already prohibit sexual relationships between clients and their doctors, psychiatrists or attorneys, the Baptists called on "lawmakers in every state to pass laws that would provide consistent definitions and classification of sexual abuse by pastors, as sexual abuse committed by pastors constitutes a clear abuse of authority and trust."

Delegates, known as messengers, voted overwhelmingly for the resolution, which noted that Arkansas is among the states that already has laws addressing the topic.

At the Southern Baptist's 2021 annual meeting in Nashville, Tenn., messengers said pastors who commit sexual abuse should be permanently disqualified from ever holding a leadership position within a church.

Standards for pastoral care should be as high as those set for secular professionals, Wednesday's resolution stated.

"We've spent much time this week and in the history of our convention discussing the need to resist, rebuke and expel wolves from our midst," he said, adding, "There is no more destructive wolf than those who destroy faith through sexual abuse."

All too often, "sexually aggressive or sexually predatory pastors can move from church to church, with a trail of victims left behind them and we simply say 'He fell into sin,'" Gulledge said.

"It is illegal, in many states for a teacher to have sex with a student who is of legal age and it should be illegal for pastors to prey upon their own congregations and this congregation should have no problem saying so," he added.

The resolution also asked legislators to pass laws shielding churches from civil liability "when they share information about alleged abuse with other organizations or institutions."

In 2019, the Texas Legislature unanimously passed such a shield law there that had been championed by Bart Barber, a Farmersville, Texas, pastor and the convention's incoming president.

At a news conference after voting on resolutions was complete, Barber said the Texas legislation had been endorsed by other organizations, including the U.S. Conference of Catholic Bishops.

"This is not just a church problem, it's a problem that touches many parts of our society, so we would be delighted to see not just Southern Baptist churches but also people of goodwill across the country work with us to help these kinds of laws get passed," he said.

During this year's annual meeting, the messengers passed nine resolutions and debated a number of other proposals.

Supporters had warned the move would undercut efforts to lobby against abortion at a time when the U.S. Supreme Court is poised, they believe, to overturn Roe v. Wade.

Critics portrayed the agency as divisive and politically driven.

Joshua Scruggs, a messenger from North Carolina, made the motion, accusing the commission of "causing needless division among Baptists," and of taking positions on issues "that Southern Baptists significantly disagree on."

Richard Land, who served as the commission's president from 1988 to 2013, spoke against the measure, noting that the Supreme Court, any day now, is expected to rule on the constitutionality of Mississippi's 15-week ban on abortion.

A draft copy of the decision, leaked last month, showed that a majority of the court appeared poised to overturn Roe and return the issue to the states.

Such a move, Southern Baptist Theological Seminary President Albert Mohler told messengers moments earlier, would trigger a state-by-state battle, with some states rushing to outlaw abortion and others attempting to bolster abortion rights.

"I can't imagine a more damaging moment for the Southern Baptist Convention to defund the ERLC," he said, maintaining that the agency would be "perfectly primed" to help anti-abortion forces prevail.

The agency, with offices in Washington, D.C., and Nashville, Tenn., became a lightning rod for controversy after its president at the time, Russell Moore, became the denomination's most visible critic of candidate and then President Donald Trump.

Moore's criticism of the convention's handling of sexual abuse allegations further antagonized some of his Baptist colleagues, including Ronnie Floyd, who was serving at the time as chief executive officer and president of the executive committee charged with addressing the issue.

Floyd, the former pastor of Cross Church Northwest Arkansas, had also been a member of Trump's 2016 evangelical advisory board as had Land and several other Southern Baptists.

On Wednesday, Land told messengers he had disagreed with some of the agency's decisions in recent years, but nonetheless insisted the agency was too important to be discarded.

Wednesday marked the final day of the Baptists' annual meeting.

During this week's gathering, messengers also passed resolutions condemning Russian aggression and calling for peace in Ukraine, emphasizing the importance of ministry in rural areas and denouncing the Prosperity Gospel, which teaches that Christ's death on the cross enables believers to obtain health and wealth free from suffering, sickness and poverty.

The resolution "on lament and repentance for sexual abuse" apologized, by name, to ten sex abuse survivors "for our not heeding their collective warnings and taking swift action to address clergy sexual abuse sooner."

Each of the survivors had authorized their name to be included in the resolution, the drafters said.

In another resolution, messengers also condemned past efforts to forcibly assimilate Native American children by forcing them to enroll in federal boarding schools, and said efforts to forcibly convert American Indians to Christianity had been "reprehensible" and contrary to biblical teachings.

Mike Keahbone, a Native American and lead pastor at First Baptist Church Lawton-Fort Sill in Oklahoma, had urged his fellow Baptists to pass the resolution.