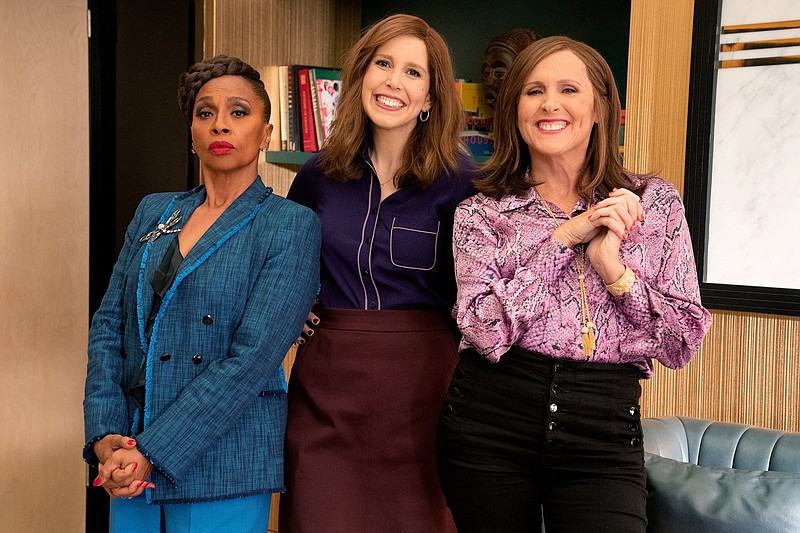 Jenifer Lewis (from left) plays Patricia, Vanessa Bayer plays Joanna and Molly Shannon is Jackie in “I Love That for You.” It might be a nice break from today’s news. (Showtime/Nicole Wilder)

Repeat after us: There is nothing wrong with taking a brief respite from the unrelenting news cycle (read: life) and watching a show that will make you laugh or otherwise bring you joy. Here are some new and returning shows we'll be turning to when the summertime sadness hits.

Robin Thede, an alumna of "The Larry Wilmore Show" and her own short-lived late-night show, is the creator of this beloved sketch comedy series, which returned in April for its third season and was recently renewed for a fourth. The current season begins with "Product Purge," an annual event where Black women have exactly 12 minutes to return hair-care items "that did not have the desired results" (if you know, you know) and get their money back. Other gems include "What Up I'm Three," which features Thede as a very large, cigarette-smoking toddler, and a weather forecast tailored to Black women and their hair. (Streams on HBO)

The second season of Meredith Scardino's musical series comes together like the fine harmonies of the reunited Girls5eva crew — Dawn (Sara Bareilles), Summer (Busy Philipps), Gloria (Paula Pell) and Wickie (Renee Elise Goldsberry) — as they set out to make a new album. Washington Post TV critic Inkoo Kang wrote that "the deeply satisfying character development of each Girls5eva member — and the greater poignancy of their sisterhood in their later years, as the concept matures from Spice Girls-esque marketing hook to genuine affection and respect for one another" is reason enough to keep watching. (Streams on Peacock)

3. "The Proud Family: Louder and Prouder"

"The Proud Family" creator Bruce W. Smith teamed up with "Moesha" co-creator Ralph Farquhar for this fun and hilarious revival of Disney Channel's groundbreaking animated series about Penny Proud (Kyla Pratt) and her family, including dad Oscar (Tommy Davidson), mom Trudy (Paula Jai Parker) and hip grandmother Suga Mama (Jo Marie Payton). "Louder and Prouder" is the perfect description for the update, which reflects the generational advances we've made since the original premiered in 2001, from social media and influencer culture to Lizzo as reigning pop star. (Streams on Disney Plus)

Jean Smart returns to her Emmy-winning role as a pioneering comic Deborah Vance embarking on her second act with the help of a young comedy writer Ava (Hannah Einbinder). The show, which made critic Kang's list of the best TV of 2021, received another rave review for its second outing, which premiered in May. "The writing is funnier and more poignant, the ensemble has gelled and ... with Smart never better," the series is "firing on all cylinders," Kang wrote. "It's exactly what you'd hope from any sophomore season." (Streams on HBO)

Former "Saturday Night Live" MVP Vanessa Bayer plays Joanna Gold, a woman who decides to go after a dream she has had since battling leukemia as a teenager: hosting on a home shopping network. When Joanna lets her awkwardness get the best of her while live on the air, she taps into her traumatic childhood experience to chaotic results. The comedy series, created by Bayer and former "SNL" writer Jeremy Beiler, gets a boost from fellow "SNL" alumna Molly Shannon, who plays Joanna's idol-turned-mentor, and perpetual scene-stealer Jenifer Lewis (whom, while we're on the subject, we wouldn't mind seeing in her own "Hacks"-esque starring role) as the network boss. (Streams on Showtime)

Bill Hader and Alec Berg's comedy about a distinctively talented hit man who pivots to the dramatic life of an actor has been a delight to watch since its very first season. It seems likely that Hader, who won the best-actor Emmy in consecutive years for the first two installments, will again be an awards contender: The third season, which finds Barry's double lives more tangled than ever, recently returned to rave reviews after a multiyear pandemic delay. (Streams on HBO)

Oscar Isaac plays a superhero with dissociative identity disorder who investigates a mystery involving Egyptian gods in this refreshingly oddball Marvel origin story. Isaac "is sometimes a shy Brit named Steven Grant, other times a lethal mercenary named Marc Spector. A multiverse of his mind's own making leaves this show's hero unsure of who he'll be when he wakes up each morning, causing him to sometimes not want to sleep at all," wrote The Post's David Betancourt. (Streams on Disney Plus)

This charming and funny anime, based on the manga by Tatsuya Endo, follows Agent Twilight, a spy who recruits a telepathic orphan and an assassin to pose as his family while he attempts to intercept an elusive criminal. (Streams on Crunchyroll)