Fed raises rate by three-quarters of a point

2nd hike weighed for July if inflation still up by Compiled by Democrat-Gazette Staff From Wire Reports | June 16, 2022 at 7:06 a.m. 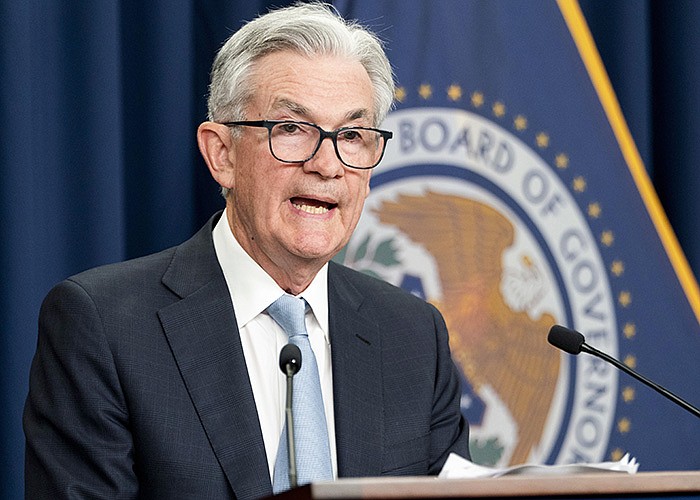 “We thought strong action was warranted at this meeting, and we delivered that,” Fed Chairman Jerome Powell said Wednesday at a news conference in Washington. (AP/Jacquelyn Martin)

WASHINGTON -- The Federal Reserve raised its key interest rate by three-quarters of a point Wednesday-- the largest bump since 1994 -- as it tries to chill the U.S. economy without causing a recession.

The unusually large rate increase came after data released Friday showed that inflation rose last month to a four-decade high of 8.6% -- a surprise jump that made financial markets uneasy about how the Fed would respond. The Fed's benchmark short-term rate, which affects many consumer and business loans, will now be pegged to a range of 1.5% to 1.75% -- and Fed policymakers forecast a doubling of that range by year's end.

"We thought strong action was warranted at this meeting, and we delivered that," Fed Chairman Jerome Powell said at a news conference in which he stressed the central bank's commitment to do what it takes to bring inflation back down to the Fed's target rate of 2%, even if that resulted in a slightly higher unemployment rate.

Powell said it was imperative to go bigger than the half-point increase the Fed had earlier signaled because inflation was running hotter than anticipated -- causing particular hardship on low-income Americans and solidifying the public's view that stubbornly high inflation won't be easily resolved.

Powell said that another three-quarter-point increase is possible at the Fed's next meeting in late July if inflation pressures remain high, although he said such increases would not be common. He said the economy is strong enough to endure higher rates without tipping into recession, a prospect about which many economists are increasingly worried.

Some financial analysts suggested Powell struck the right balance to reassure markets, which rallied on Wednesday. "He hit it hard that 'we want to get inflation down' but also hit hard that 'we want a soft landing,'" said Robert Tipp, chief investment strategist at PGIM Fixed Income.

Still, the Fed's action on Wednesday was an acknowledgment that it's struggling to curb the pace and persistence of inflation, which is being fueled by a strong labor market, pandemic-related supply disruptions and soaring energy prices that have been aggravated by Russia's invasion of Ukraine.

One official, the president of the Federal Reserve Bank of Kansas City, Esther George, voted against the rate increase. Though George has historically worried about high inflation and favored higher interest rates, she would have preferred a half-point move in this instance.

Until late last week, markets and economists broadly expected a half point move. The Fed had raised rates by a quarter point in March and half a point in May, and had signaled that it expected to continue moving up at that pace in June and July.

Some analysts said they welcomed the Fed's more aggressive posture.

"The Fed nailed it," said Ronald Temple, co-head of multi-asset and head of U.S. equity at Lazard Asset Management. "The Fed demonstrated its resolve to tame inflation without undermining its employment mandate."

Matthew Luzzetti, chief U.S. economist at Deutsche Bank, said Powell was right to acknowledge that the faster push on rates will cause pain for consumers. "It's going to be a far bumpier ride to get inflation down than what they had anticipated previously," Luzzetti said.

The Fed's rate increases are blunt tools for trying to lower inflation while also sustaining growth. Shortages of oil, gasoline and food are contributing to higher prices. Powell said several times during the news conference that such factors are out of the Fed's control and may force it to push rates even higher to ultimately bring down inflation.

Borrowing costs have already risen sharply across much of the U.S. economy in response to the Fed's moves, with the average 30-year fixed mortgage rate topping 5%, its highest level since before the 2008 financial crisis, up from just 3% at the start of the year.

Even if a recession can be avoided, economists say it's almost inevitable that the Fed will have to inflict some pain -- most likely in the form of higher unemployment -- as the price of defeating chronically high inflation.

Powell struck a defensive note when asked whether the Fed was now prepared to accept a recession as the price of curbing inflation and bringing it close to the Fed 2% target level.

"We're not trying to induce a recession now," he said. "Let's be clear about that. We're trying to achieve 2% inflation."

In their updated forecasts Wednesday, the Fed's policymakers indicated that after this year's rate increases, they foresee two more rate increases by the end of 2023, at which point they expect inflation to finally fall below 3%, close to their target level. But they expect inflation to still be 5.2% at the end of this year, much higher than they'd estimated in March.

Over the next two years, the officials are forecasting a much weaker economy than was envisioned in March. They expect the unemployment rate to reach 3.7% by year's end and 3.9% by the end of 2023. Those are only slight increases from the current 3.6% joblessness rate. But they mark the first time since it began raising rates that the Fed has acknowledged that its actions will weaken the economy.

The central bank has also sharply lowered its projections for economic growth, to 1.7% this year and next. That's below its outlook in March but better than some economists' expectation for a recession next year.

Even if the Fed manages the delicate trick of curbing inflation without causing a downturn, higher rates will inflict pressure on stocks. The S&P 500 has already sunk more than 20% this year, meeting the definition of a bear market.

On Wednesday, the S&P 500 rose 1.5%. The two-year Treasury yield fell to 3.23% from 3.45% late Tuesday, with the biggest move happening after Powell said not to expect 0.75 percentage point rate increases to be common.

The Fed's move to rein in inflation will affect home mortgage loans, credit card borrowing, car loans, labor market stability and overall consumption. The goal is to reduce the amount of money supply in the economy.

"Too much money makes the money less valuable," said Larry Harris, professor of finance at the University of Southern California Marshall School of Business and former chief economist at the U.S. Securities and Exchange Commission. "To control inflation, the Fed has to stop creating so much money. And when it stops creating money, interest rates tend to rise."

Though the Fed doesn't set the interest rates consumers pay on their credit cards, mortgages or personal loans, it controls the federal funds rate, which is the basic rate at which banks borrow and lend from each other. When that moves, so do consumer interest rates.

Banks are required to have a certain amount of money in reserve, and when they make loans to people who want to buy homes, cars or start businesses, they might have to borrow from other banks to make sure they maintain that reserve number.

At this time last year, the interest rate for borrowing from the general banking system was 0%, said Leo Feler, a senior economist at the University of California at Los Angeles. At that rate, banks were more than willing to make loans to consumers because there were basically no costs involved in covering their reserves. But now, with a higher interest rate range of 1.5% to 1.75%, banks will want to ensure they have enough in reserve and act more cautiously, making fewer home, auto or other loans as a result, he said.

The Fed's benchmark interest rate increase will affect the minority of households who take out adjustable-rate mortgages or home equity lines of credit, likely increasing their cost to borrow.

Affected homeowners who have the option of converting to fixed-rate loans may want to consider doing so, said USC's Harris.

The effect on fixed rate mortgages -- including the popular 30-year fixed loan -- is less certain.

Mortgage experts said increases in the federal funds rate don't directly affect these mortgages, but they can indirectly push fixed mortgage rates higher or lower if Fed actions influence investor thinking about how entrenched inflation is.

That's because if inflation is expected to be high in the future, investors will demand a higher yield, or interest rate, on mortgages before they buy them.

"With rising interest rates, people who have borrowed money at variable rates, like people who borrowed on their credit cards, should make an extra effort to reduce their balances as quick as they can," Harris said. "Otherwise, they'll pay higher rates in the future, which will hurt them."

The Fed's higher-than-expected rate increase means hiring will likely slow down and there may be more layoffs on the horizon, UCLA's Feler said. He forecasts that the national unemployment rate will go up to 4.5% by the end of the year, up from 3.6% right now.

A tighter job market means consumers will be worried about keeping their jobs and could be less likely to ask for higher wages. It also means people in low-wage jobs or jobs they don't like will probably stay in their positions for fear of being unemployed.

"This trickles throughout the labor force," Feler said. "As unemployment goes up, wage growth tends to slow down."

Information for this article was contributed by Christopher Rugaber of The Associated Press, Samantha Masunaga, Somesh Jha and Andrew Khouri of the Los Angeles Times (TNS), Jeanna Smialek of The New York Times and Rita Nazareth of Bloomberg News (WPNS). 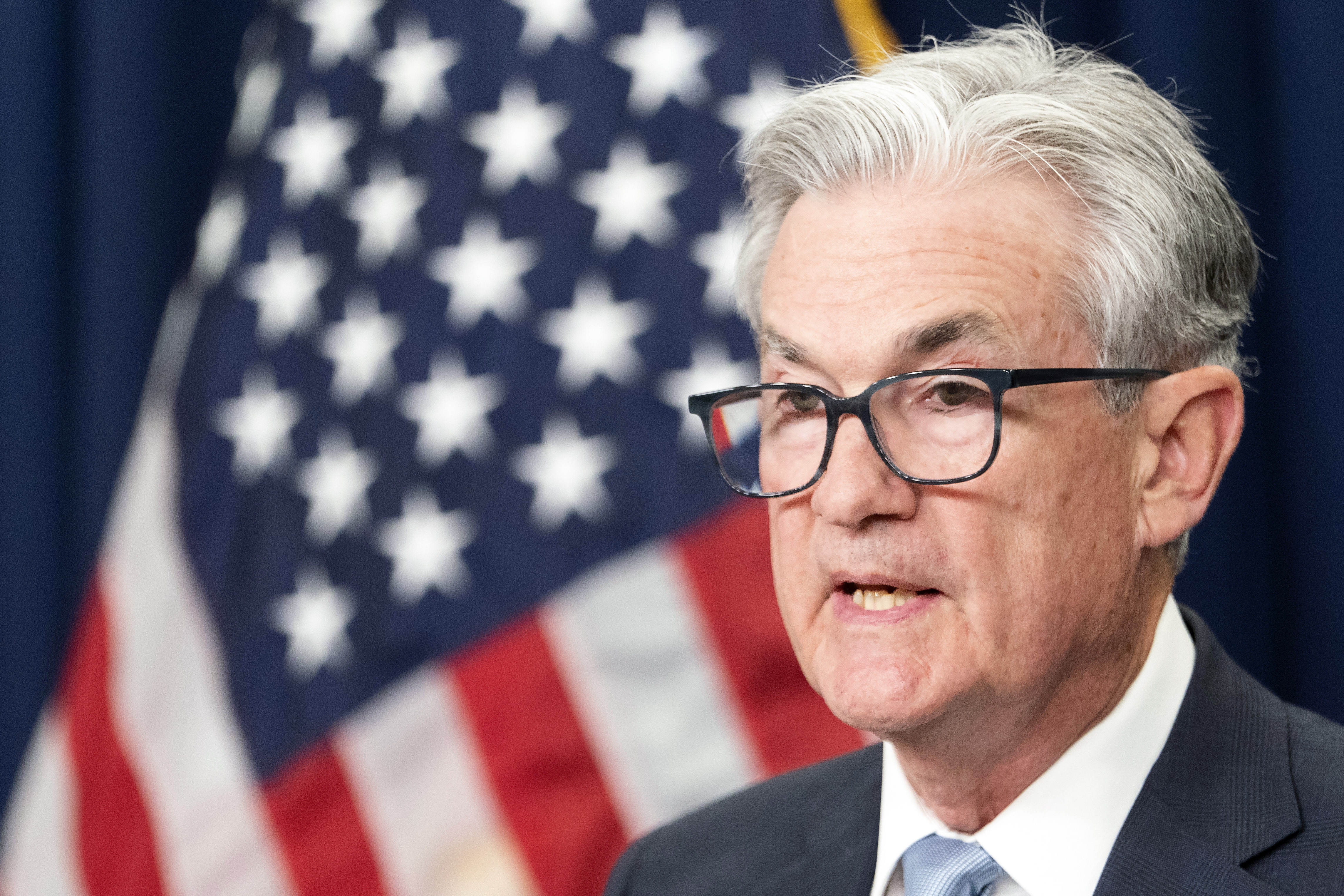