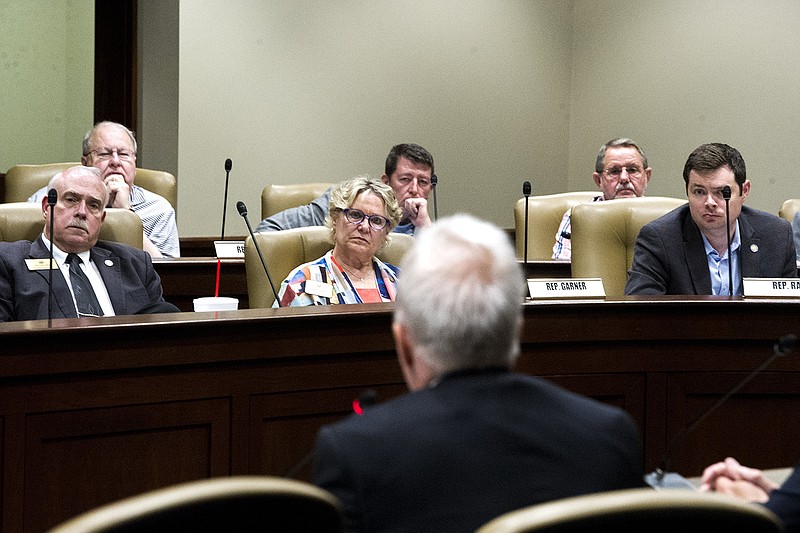 Members of the legislative lottery oversight subcommittee listen Wednesday as Eric Hagler, director of the Arkansas Lottery, discusses a proposal for the creation of a new draw game. (Arkansas Democrat-Gazette/Stephen Swofford)

A legislative panel on Wednesday endorsed the Arkansas Scholarship Lottery's proposed one-year contract for up to $1.5 million with lottery consultant Camelot Global Services that has worked with the lottery since 2015.

About 82 % of the lottery's sales are scratch-off tickets, and "we need more balance" in the lottery's portfolio of games, Hagler said.

"It's not the perfect time to launch the game," Hagler acknowledged. Record high gasoline prices have been a factor in declining lottery ticket sales in recent months.

But potential lottery players are more apt to take a look at a new lottery game even with declining lottery ticket sales, he said.

The lottery has been selling tickets since Sept. 28, 2009, and has helped finance Arkansas Academic Challenge Scholarships for more than 30,000 college students during each of the past 11 fiscal years.

Camelot would be paid base compensation of $500,000 by the lottery in fiscal 2023 under the proposed contract that cleared the Legislative Council's Lottery Oversight subcommittee on Wednesday with no audible dissenters.

The contract still must be approved by the Legislative Council, which meets Friday.

Under the proposed contract, Camelot has the potential to receive up to $1 million more from the lottery in fiscal 2023 based on a formula under which Camelot would receive 5 % of the "total operating income before transfers" to college scholarships that exceed $90 million in fiscal 2023. Under the formula, Camelot also would receive a $500,000 achievement bonus if the combined sales of the Natural State Jackpot and Arkansas Lotto tickets reach $18.2 million in fiscal 2023. However, if the launch of the Arkansas Lotto draw game extends beyond the week starting Oct. 3, this target would be reduced by $312,820 per week under the proposed contract.

The lottery has sold about $8.5 million in Natural State Jackpot tickets so far in fiscal 2022, which ends June 30, said Mike Smith, the lottery's gaming director.

In a letter dated May 24 to Hagler, Mitch Rouse, director of the state's procurement office, said he granted the lottery's special procurement request to enter into a one-year contract with Camelot.

"Given Lottery's assessment of its needs in the performance in its statutory mission of 'maximizing net proceeds in a responsible manner,' I am determining that the request is an unusual or unique situation that makes the application of all requirements of competitive bidding, competitive sealed bidding or competitive sealed proposals contrary to the public interest," Rouse wrote in his letter.

But Rouse denied the lottery's request to include an option to renew the contract for an additional term of one year.

He said the lottery's procurement coordinator, Eric Brown, made a mistake including that option in the proposed one-year contract.

Hagler said he signed a letter dated May 5 to Rouse requesting that option in the proposed one-year contract .

"I apologize," he said. "It was simply a miscommuncation within my own department."

In June 2020, the Legislative Council signed off on a contract extension for Camelot Global Services that started July 1, 2020 and runs through June 30 this year. At that time, then-lottery Director Bishop Woosley told lawmakers that Camelot "has been a good partner," though some lottery officials raised questions to Woosley earlier in the year about the agency extending its contract with Camelot.

In November 2015, state officials initially signed a contract with Camelot through June 30, 2020, with options for two one-year extensions, to help develop and implement a business plan for the lottery. The initial contract was signed several months after Republican Gov. Asa Hutchinson and the Republican-controlled Legislature put the lottery under the control of the state Finance Department and eliminated the nine-member Arkansas Lottery Commission.

In September 2014, the Legislative Council voted to hire Camelot Global Services to review the lottery's operations and make recommendations to improve it, without taking bids, at the request of Sen. Jimmy Hickey, R-Texarkana. Camelot subsequently received $169,500 from the Bureau of Legislative Services for its work.

According to lobbyist registration records at the secretary of state's office, Camelot is represented by the Capitol Advisors Group, which includes Bill Vickery, Mitchell Lowe, former Rep. John Burris, R-Harrison, and Nicole Gillum. 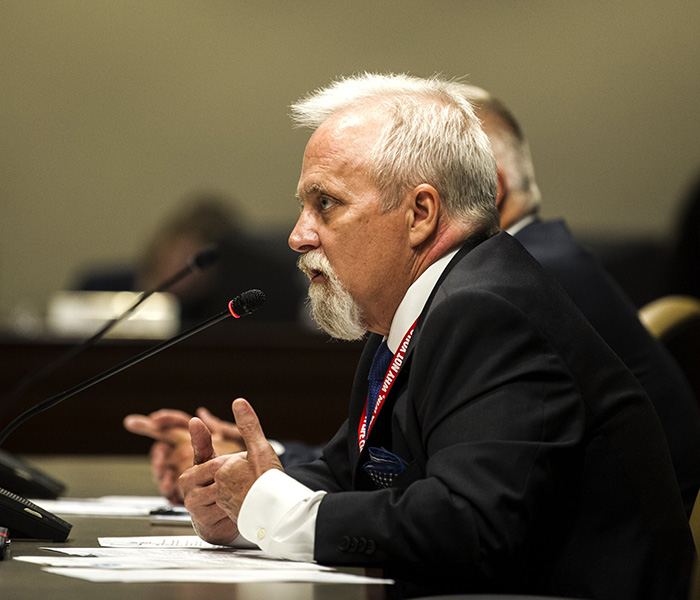 Eric Hagler, director of the Arkansas Scholarship Lottery, discusses a proposal for the creation of a new draw game during a meeting of the legislative lottery oversight committee at the state Capitol in Little Rock on Wednesday. (Arkansas Democrat-Gazette/Stephen Swofford)