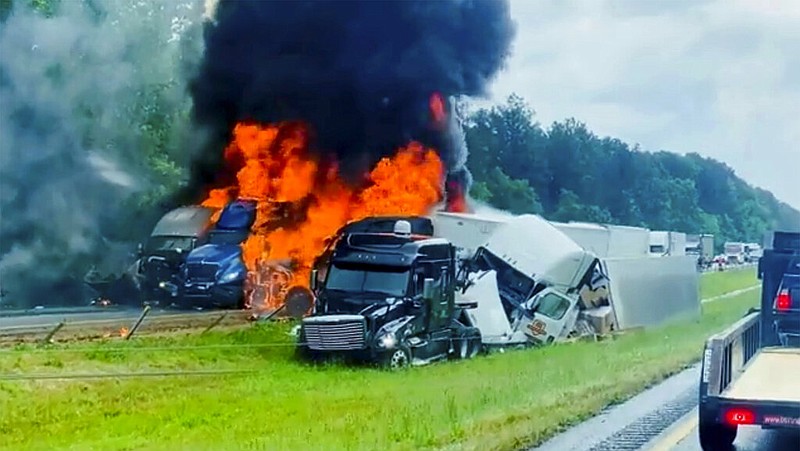 In this image taken from video recorded on June 8, 2022, flames and smoke billow from trucks involved in a deadly multiple vehicle crash along Interstate 30 near Caddo Valley in southwestern Arkansas. (AP/Joni Deardorff)

A man involved in a multivehicle pileup on Interstate 30 last week died on Wednesday, bringing the death toll from that crash to four, a spokesman for Arkansas State Police said.

James Carter Jr., 18, of Arlington, Texas, died of his injuries Wednesday afternoon, state police spokesman Bill Sadler said. Sadler did not elaborate about his injuries, but said police had expected him to recover.

Horace Butcher, 82, of Hensley, and Anthony Peoples, 52, of Hot Springs, were previously named as fatalities in the crash, which involved at least 20 vehicles and was reportedly caused by heavy rain, according to a preliminary fatality report by Arkansas State Police.

Police had to use DNA testing to identify the two, Sadler said. Several of the vehicles involved in the wreck caught fire and burned, melting the pavement near mile marker 85 and closing both westbound lanes for more than 24 hours.

Another man, 65-year-old George Adamson, of Hope, was killed when he tried to avoid the pileup and struck a tree, according to a separate report.

Carter is listed as injured on the same fatality report in which Hensley and Peoples are identified, alongside 11 other injured motorists.

Police don't expect any more people to die of their injuries from the wreck, Sadler said, but did not want to rule out the possibility because Carter's death was unexpected.