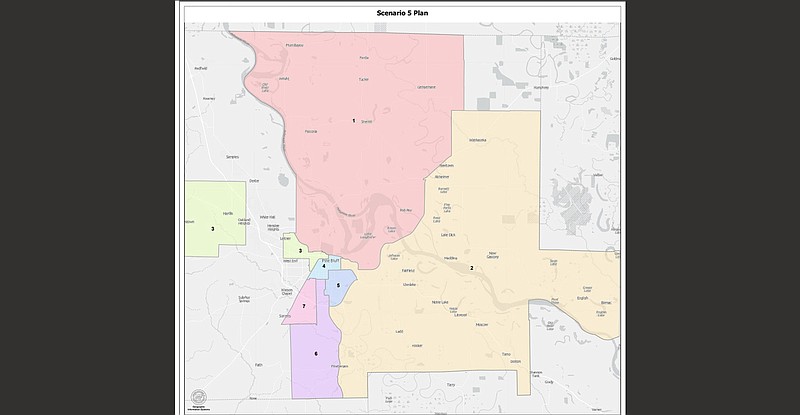 The state secretary of education adopted a drawing of zoning lines for the Pine Bluff School District.

Secretary Johnny Key selected a scenario that was devised after the Arkansas Geographic Information Systems presented three possible drawings to district residents in April at Dollarway High School. District residents then reviewed and voted on the scenarios, with the selected one receiving the biggest tally.

"While I appreciate the submission from members of the community of what was labeled Scenario 4, upon analysis it did not meet the muster for redistricting standards," Key said in a statement Tuesday. "The population deviation of that proposal ranged from minus-76% to plus-42%, which far exceeded acceptable limits. The boundary lines of that submission also gave the appearance of gerrymandering, which we must absolutely avoid."

Scenario 5, however, was developed after researching Scenario 4, district officials said. The selected rendering drew seven zones that each ranged in population from 5,230 to 5,567. The target number was 5,423, which is one-seventh the total district population of 37,961.

"The new zones are well within the allowable population variation for electoral zones, and the boundary lines are clear," Key said. The Arkansas Department of Education operates the PBSD, and Key acts as the district board.

The PBSD hopes to install a limited-authority school board by the start of the 2022-23 school year.

Many of those communities were part of the Dollarway School District, which was annexed into the PBSD last July. The annexation and the 2020 census prompted the redrawing of the zones.

Zones 3-7 cover a large portion of Pine Bluff and extends down to the Pinebergen community, with an unattached portion of Zone 3 circling the Hardin community.