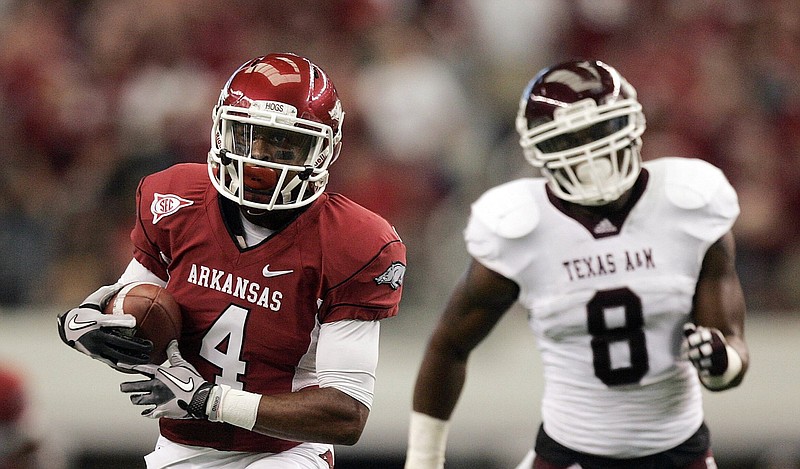 Arkansas’ Jarius Wright heads to the end zone for a touchdown after making a catch over Texas A&M’s Garrick Williams on Oct. 1, 2011, at Cowboy Stadium in Arlington, Texas. (Democrat-Gazette file photo/William Moore)

Jarius Wright, a Warren standout and NFL veteran, reunited with his college quarterback and was also appointed as a middle school paraprofessional. The White Hall School Board approved his hiring, among others, during Tuesday’s board meeting.

Wright, 32, teamed with Mallett during the 2009 and 2010 seasons, helping the Razorbacks win the Liberty Bowl and then reach the Sugar Bowl. A four-year player under coach Bobby Petrino, Wright totaled 2,934 receiving yards and 24 touchdowns.

He then was drafted in the fourth round by the Minnesota Vikings in 2012 and finished with 2,039 yards and 10 touchdowns receiving in six seasons. His final two seasons were with the Carolina Panthers, as he added 743 yards and a touchdown.

Wright will now help the Bulldog team hoping to build on a 5A state runner-up finish from last December under Bobby Bolding. Mallett was named Bolding’s successor in February, but Bolding stayed on as athletic director through the end of this school year.

Bolding will become defensive coordinator at Little Rock Parkview and has helped his brother Brad’s team in a 7-on-7 event in Benton with Mallett and Wright working with the Bulldogs there.

Wright’s hire was one of three key moves within the White Hall athletic department.

The board approved the hiring of Mark Cantwell as athletic director and middle school dean of students. Cantwell will continue to serve as junior high head coach.

Each door on every White Hall School District campus will be equipped with a camera and every exterior door (all doors except the main entrance) as a way to enhance security.

The White Hall board approved the purchase of such equipment, but Superintendent Doug Dorris — who appeared in his final board meeting before retirement — said the move was not made in response to a mass shooting at a Uvalde, Texas, elementary school on May 24.

“We had been working on having security at all of our schools such as main doors and side doors,” Dorris said. “We decided to get everything done at once.” Each school resource officer will then be equipped with a security display that shows all outside angles of the campus, Dorris said.