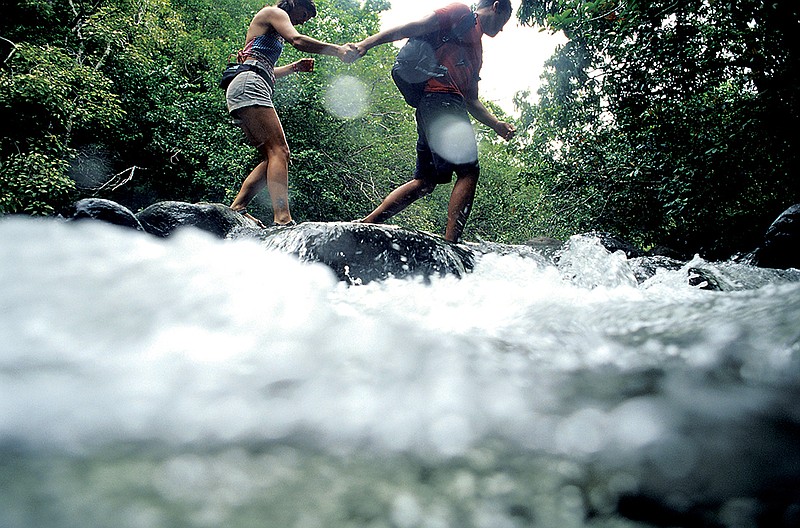 BENTONVILLE -- Adventure racers will take on the outdoor challenges in Northwest Arkansas when they compete in the Expedition Ozark Race next year.

Michael Spivey, president and chief executive officer of Ozark Outdoor Foundation, announced at a news conference Thursday that the foundation and Adventure Racing World Series will co-host the race, to take place April 1-8.

"We believe this event, Expedition Ozark, will showcase the rugged beauty of the Ozark region and further cement Northwest Arkansas as a premier outdoor recreation destination," Spivey said.

Adventure Racing World Series organizes adventure racing events that feature mixed-gender, four-person teams that hike, bike, paddle, climb and run courses across hundreds of miles over five days. Each season culminates with the ARWS World Championships, which will be held in South Africa in 2023.

Spivey said the races are tough, and the Northwest Arkansas event is one of three expedition level adventure races in North America.

The race will showcase the most rugged areas in the region through different activities that include trekking, climbing and rappelling, but also includes use of the area's lakes and rivers, said Danny Collins, race director for Ozark Expedition. The races test competitors both physically and mentally, Collins said.

The race route will remain a secret until a day before the race, Collins said.

Heidi Muller, chief executive officer of Adventure Racing World Series, which is based in Johannesburg, South Africa, said they have 40 races around the world.

"Adventure racing is not a mass sport," she said. "It's definitely more of a niche sport."

Muller said 100 to 200 racers may compete in events. Each person must work as a team to get to the finish line. The races offer life-changing experiences for competitors, she said.

Muller came to Northwest Arkansas to scout the Ozark terrain.

"We endeavor to make our races unique by highlighting the most beautiful parts of each country to the world," she said. "Whether it is ocean coasts or river banks, forests or jungles, sandy deserts or Rocky Mountains, racers are always excited to tackle the unique challenges of every course and in doing so, they provide exciting entertainment for spectators watching from around the world."

Jason Wilford, the director of strategic planning and event director for the race, said the race will take place over four to six days involving more than 300 miles. He said they hope to have 40 to 50 teams, but also will have a 12-hour competition on the last day of the race for some local people or others who want to participate.

Wilford, who competed in adventure racing, said it's an extreme sport and requires a massive undertaking. People can't just wake up and decide to compete in a race, he said.

He said the plan is to make the shorter races fun and competitive for racers.

Anyone wanting to participate in the race can contact him at jwilford@ozarkfoundation.org, Wilford said.

Teams must have a navigator who understands a map. They may not use iPhones or other technology to assist them, he said. Each team will be given a radio or safety phone, but it can only be used in emergencies, Wilford said.

The plan is for the race to become a yearly event, but each year the route will change, he said.

There's an entrance fee for the multiple-day event, and racers can win prize money, but the amounts of the fee and prize money have not been determined, Wilford said.

The Ozark Outdoor Foundation is a charitable organization focused on creating fun and enriching outdoor experiences in Northwest Arkansas that elevate the region as a better place to work, live and play, according to the mission statement on its website.