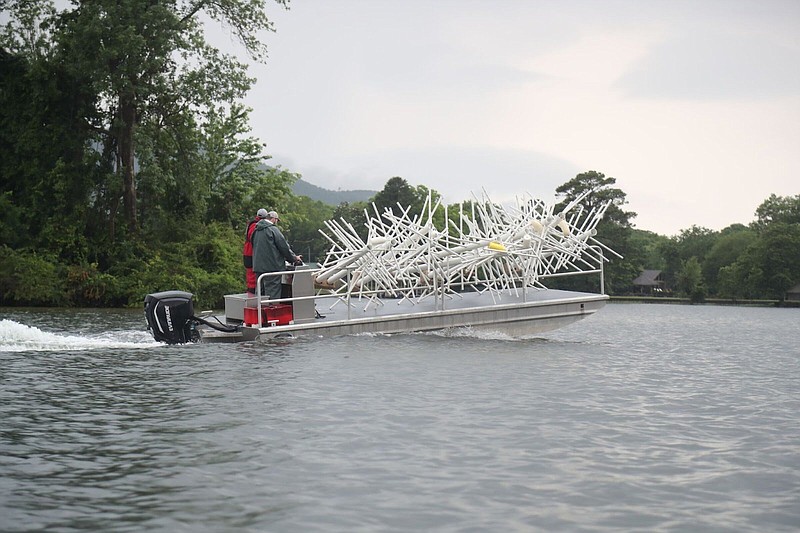 The sinking of trees cut from a lake's nearby shoreline has become a popular Arkansas Game and Fish Commission method for boosting a fishery and helping the anglers using it, but some bodies of water like Lake Hamilton don't offer the luxury of such handy habitat tools.

Lake Hamilton, which doesn't have much if any aquatic vegetation on its lower end, does feature trees along its shoreline, of course, but it also has homeowners who enjoy their landscaping near that shoreline, too.

"I'm sure I could find plenty of trees in the backyards of Lake Hamilton property owners, but they're probably not going to take it real well if we come out with chainsaws," said Brett Hobbs, supervisor of the Arkansas Game and Fish Commission's district fisheries office at Hot Springs.

So, Hobbs and the AGFC have taken a different approach to providing the Lake Hamilton fish population, and the lake's anglers, with habitat improvements.

The "trees" that AGFC staff were building and sinking recently at the Lake Hamilton boat access near the Andrew H. Hulsey Fish Hatchery were made from polyvinyl chloride, commonly known as PVC.

Hobbs assembled a team of other AGFC fisheries staff and created a construction assembly line -- for example, biologists Colton Dennis and Sean Lusk were constantly drilling a series of holes into 10-foot-long pipe, while other staff were putting thinner piping through those holes for the "tree limbs." The base of the two "tree trunks" was secured with a concrete block and further locked together with more pipes on the upper end, forming a "tree stand."

Completed PVC tree structures were loaded onto barges and delivered to predetermined destinations around the lake. Thirteen new fish habitat sites were constructed during this project and those coordinates will be added to the AGFC's interactive map showing all habitat structures on Lake Hamilton.

"A habitat project such as this one is centered around providing places for folks to fish, areas where fish can be concentrated, making it easier for our anglers," Hobbs said. "Lake Hamilton, like other lakes in Arkansas, has been receiving fish habitat waypoints for several years. Some of these habitat sites have aged and degraded over time, especially one constructed of natural brush or trees."

AGFC fish habitat projects have been completed in recent years with the cooperation of the U.S. Army Corps of Engineers at Beaver, Bull Shoals and Greers Ferry lakes and Lake Greeson. For these projects, the Corps gave AGFC approval to cut trees from the shoreline. Much of this work was done with cedar trees when available, but sometimes elm, hickory and sweetgum were used. Trees for these projects were taken from Corps-approved shoreline areas or islands and were dragged by large habitat barges to the shoreline, where they were bundled and weighted for sinking.

New habitat structures attract a variety of baitfish and in turn predators such as black bass and crappie are attracted and concentrated, providing fishing opportunity for anglers. The AGFC Fisheries Division earmarks a portion of its annual division budget for fish habitat work throughout the state.

Lake Hamilton, which is owned and managed by Entergy, "is not one of these lakes that offers the advantage of having natural trees around the shoreline available for such a project," Hobbs said. "We're more constrained to use PVC for any fish habitat work."

"In that particular project we used a different configuration (than at Lake Hamilton)," Hobbs said. "We made habitat cubes out of PVC and corrugated drainage pipe. We mimicked some work another state agency had done, using a version of their design. For this project we decided we were going to use the tree-style structures. A similar project was done at Lake Chicot (in southeast Arkansas) several years ago and I understand those tree-style habitat structures proved popular with their anglers. The PVC trees used for the Lake Hamilton project were considerably larger than what was used there."

Entergy annually lowers Lake Hamilton 3 to 5 feet for a November-to-March drawdown, and it retains the right to lower the lake as much as 9 feet if needed. So, the AGFC made sure to place tree habitat structures, consisting of five groups of trees at the 13 new locations, at about a 20-23 feet depth, eliminating a possible boating hazard.

"The PVC is going to be very long-lived," Hobbs said. "The natural stuff we've used for habitat work, especially if it's not a cedar, tends to decay with time. We had used natural habitat material here in the past, some with cane and some trees that had been brought in from off-site, but as we started looking on some of our waypoints on Lake Hamilton we found that, indeed, many of those had decayed away. We had waypoints on the agency interactive map that were no longer fruitful for anglers. We removed those old waypoints and added these 13 new sites."

Hobbs said he's "fond of the natural stuff when it's available. I prefer cedar for its longevity if you can get it," but PVC fits nicely in this case. Even without natural tree vegetation, the PVC will soon develop an algae and detritus film, periphyton, that will draw small bream and other small baitfish.

Then, Hobbs said, "We expect bass and crappie to be attracted to them as a resting and prey ambush area. Since the majority of our area anglers are pursuing bass and crappie, I expect our new habitat structures will prove popular. ... There will be new fish habitat available where there was nothing existing before."

"It's the 'Field of Dreams.' You build it and they will come." 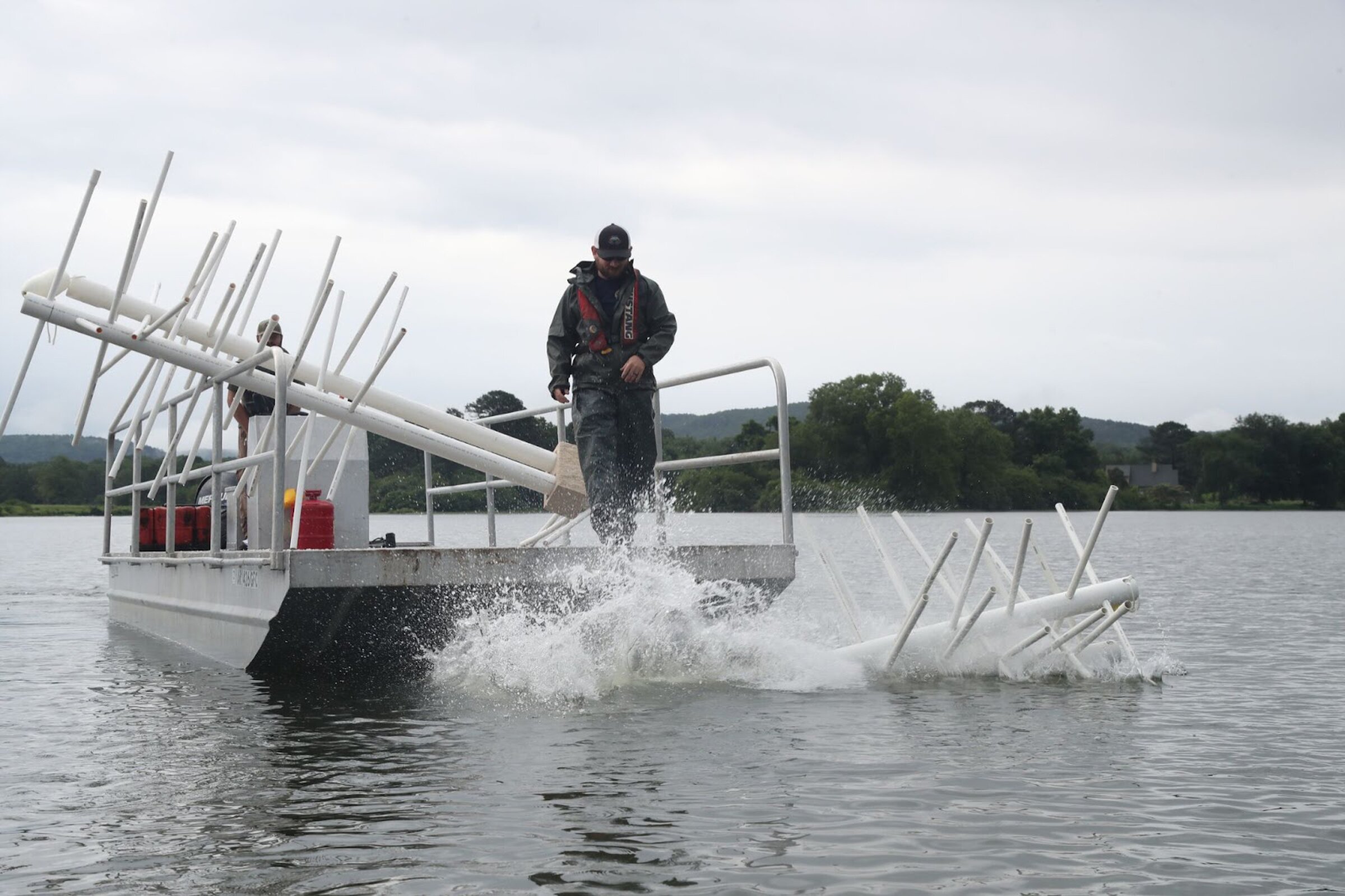