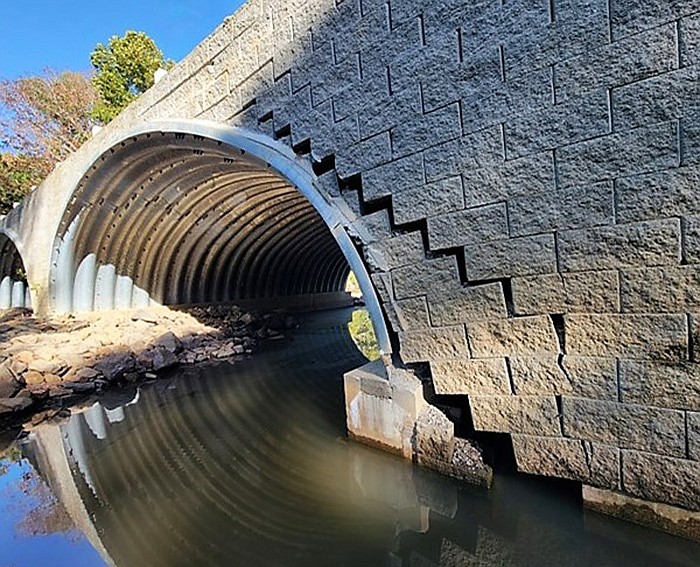 A low-water bridge over the Maumelle River in western Pulaski County that has sustained severe damage from recent flooding is set to be demolished just two years after Central Arkansas Water had the structure built.

Commissioners of the water utility at a board meeting on Thursday approved a demolition contract with a construction company for $300,000. The motion was approved in a voice vote.

The damaged bridge provided access to a nearby utility field station from Arkansas 10. Without the bridge, utility workers must take a longer route over a rougher crossing, officials said.

According to a statement from Central Arkansas Water General Counsel David Johnson that utility spokesman Doug Shackelford provided to the Arkansas Democrat-Gazette, the water utility engaged an engineering firm, GBMc & Associates, to design the bridge in November 2018.

Following the bridge's failure in May 2021, Central Arkansas Water engaged the engineering firm Olsson "to evaluate the original design and construction," Johnson wrote. "CAW anticipates a report from Olsson in the coming weeks."

Central Arkansas Water Director of Engineering Jim Ferguson told board members Thursday that the low-water crossing is approximately 2.5 miles west of the intersection of Arkansas 10 and Arkansas 113.

Work to create the three-barrel low-water crossing was completed in spring 2020, Ferguson explained.

The structure was designed with the understanding that it could potentially be overtopped by water, Ferguson said, but a significant flood in May 2021 caused the structure to fail.

Another flood earlier this month also damaged the structure, he said.

During the original flood event, the foundations that supported the barrels were undercut and broken, Ferguson said. Material that was allowed to get out from cracks and breaks was then washed downstream, leading to several potholes that appeared in the structure, he said.

A memo Central Arkansas Water Chief Operating Officer Blake Weindorf sent to commissioners in July 2021 stated in part that the water utility would engage legal counsel to pursue remedies, according to a copy shown to commissioners during the presentation on Thursday.

After inspections of the structure by all the parties involved, Ferguson said that officials believe it is time to demolish it "before it causes any further damage."

With another flood or two, the structure could "completely come apart," Ferguson suggested, possibly causing a stoppage in the river that could cause upstream flooding for which Central Arkansas Water could be held liable.

Another possibility is that the structure could be washed down the river, meaning any materials could never be salvaged, Ferguson said.

The water utility might be able to get $50,000 to $75,000 in return for some of the salvageable materials following the demolition, he said.

Commissioners approved the $300,000 contract for demolition with Boyles Construction, Inc. out of Paron. The company was the only bidder.

At an August 2019 meeting, commissioners approved the contract with Township Builders for $768,760 to remove the previous low-water crossing and construct a new, elevated crossing intended to improve access and allow passage of fish, according to meeting minutes.

According to the water utility's 2022 financial plan, the collapse of the bridge that began in May 2021 occurred approximately 60 days after the expiration of the bridge's one-year warranty.

The plan put the unfunded capital cost of restoring the river crossing at $850,000. "Funds are needed to disassemble the existing structure and rebuild a sustainable crossing while we await settlement funds," the document said.

In response to a question from a commissioner during Thursday's meeting regarding anticipated restitution, Johnson indicated the water utility would demand all of its costs associated with the bridge.