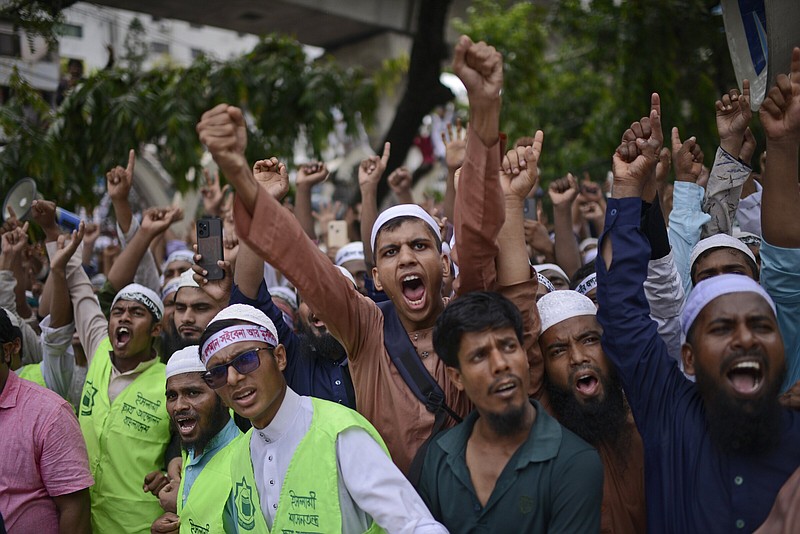 Muslims shout slogans against Nupur Sharma, a spokesperson of India’s governing Hindu nationalist Bharatiya Janata Party, during a protest outside of a mosque Thursday in Dhaka, Bangladesh. (AP/Mahmud Hossain Opu)

The march began at the country's main Baitul Mukarram Mosque but was blocked by police as it headed toward India's Embassy, a few miles away.

Hasina has maintained warm relations with India. Information and Broadcast Minister Hasan Mahmud told a group of Indian journalists that the dispute is an internal Indian matter, according to reports by Indian media.

As they marched, the protesters chanted "Down with Modi" and "Insult to Islam, will not tolerate." Many carried placards reading "We love Muhammad."

After police stopped the march, a group of five people was allowed to head toward the Indian Embassy, according to Shahidul Islam Kabir, a spokesperson for the sponsors of the protest, Islami Andolon Bangladesh. The group vowed to continue its demonstrations.

India's governing party has suspended one of the officials and expelled the other, but protesters say the actions are not enough.

At least five Arab nations have condemned the remarks and lodged official protests against India.

THE HAGUE, Netherlands -- A Dutch intelligence agency said Thursday that it foiled a sophisticated attempt by a Russian spy using a false Brazilian identity to work as an intern at the International Criminal Court, which is investigating allegations of Russian war crimes in Ukraine.

The General Intelligence and Security Service of the Netherlands said the 36-year-old man, identified as Sergey Vladimirovich Cherkasov, worked for Russia's GRU agency and tried to gain access to the global court based in The Hague under the cover name of Viktor Muller Ferreira.

The agency said it uncovered his identity and informed the Netherlands' immigration service in April that he was considered a national security threat.

"On these grounds, the intelligence officer was refused entry into the Netherlands in April and declared unacceptable. He was sent back to Brazil on the first flight out," the agency, known by its acronym AIVD, said.

One of China's largest and most capable combat ships is conducting long-distance exercises in the Sea of Japan, state media reported Thursday, in a display of China's increasing naval reach.

The Communist Party newspaper Global Times said the mission was the first for the Type 055 destroyer Lhasa since its commissioning last year.

It is accompanied by the Luyang-class Type 052D destroyer Chengdu and the Type 903 oiler Dongpinghu, the paper said, citing Japan's Defense Ministry. The Sea of Japan lies to the north of China between the Japanese archipelago, Sakhalin Island, the Korean Peninsula and the Russian Far East mainland.

Japan's Defense Ministry said the three ships were spotted about 120 miles west of Fukue island in Nagasaki on Sunday traveling east toward the Sea of Japan.

It said it also spotted a Dongdiao-class intelligence ship on Sunday operating near the Tsushima Strait which later sailed into the Sea of Japan.

ABUJA, Nigeria -- At least 35 teenage girls held captive and forced to work in a prostitution ring in southeastern Nigeria have been rescued after police raided a hotel where they were being held, police said.

The girls between the ages of 14 and 17 were found by police acting on a tipoff in Nkpor town in Anambra state, according to a statement issued by Tochukwu Ikenga, Anambra police spokesman.

The girls were being used for prostitution and some were impregnated so their babies could be sold, said the statement. Four of the girls rescued are pregnant, police said.

Three suspects were arrested in connection with the incident, the police statement said. Rifles and $2,112 cash were also recovered, police said.

"The suspects arrested are being interrogated with a view to eliciting information on their involvement and unmasking other gang members," said the police spokesman.

The girls freed will be handed over to Nigeria's National Agency for the Prohibition of Trafficking in Persons for their care while, said the statement.