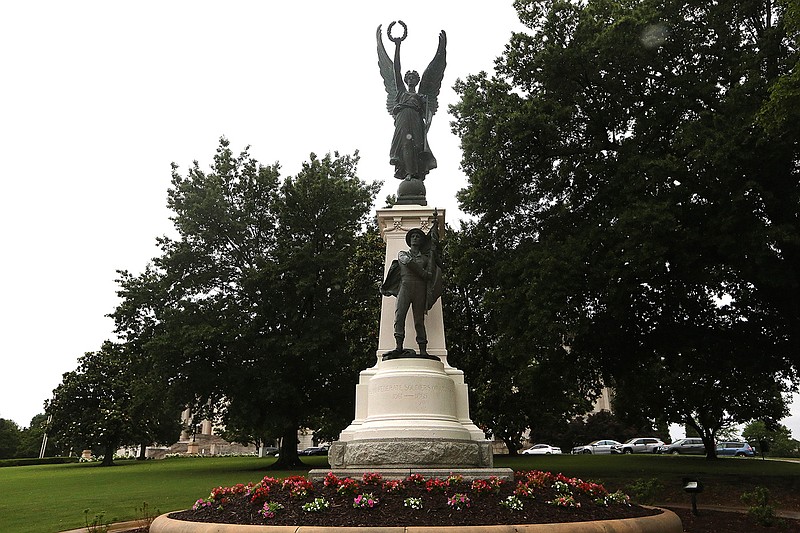 The Confederate Soldiers of Arkansas monument outside the state Capitol on Tuesday, June 7, 2022, in Little Rock. (Arkansas Democrat-Gazette/Thomas Metthe)

According to a criminal complaint filed in federal court, on June 5, just after 1:30 a.m., Arkansas State Capitol Police saw via a roof-mounted security camera a man walk from the north side of the building near the Little Rock Nine monument to the east side of the building near the Confederate Soldiers of Arkansas monument, then light something in his hand and throw it toward the monument.

A third molotov cocktail was found on Miller-Marshall after his arrest, the complaint said, and gasoline and materials to make the improvised devices were found in a car he drove to the Capitol, which he told police he had taken without permission from his roommate.

Miller-Marshall appeared before U.S. Magistrate Judge Jerome Kearney in an initial appearance on June 7 where Kearney appointed Tamera Deaver with the Federal Public Defenders Office in Little Rock to represent him.

After argument from counsel, Kearney determined that Miller-Marshall would be released on conditions to include in-patient treatment followed by 60 days' sober living to be released to third-party custody after the court's review. He was then remanded to the custody of federal marshals until he could be placed into in-patient treatment.

But during an arraignment hearing Thursday, Miller-Marshall's release was rescinded temporarily at the request of both Deaver and U.S. Attorney Erin O'Leary, who noted that he is still under a $5,000 bond on misdemeanor charges of criminal mischief and violation of the Arkansas State Capitol and Historical Monument Protection Act in Little Rock Criminal Court.

Deaver argued that should Miller-Marshall be released from federal custody, he risked being placed immediately into state custody on those charges. O'Leary said her office was trying to get the matter straightened out with the state.

"We're trying to get that resolved so that Mr. Miller-Marshall can go to rehab," she told the judge.

Saying that he had not been made aware bond had been set in the state charges against the defendant, Kearney agreed to take the matter under advisement until more information could be obtained.

As of Thursday night, Miller-Marshall was listed on the Pulaski County jail roster on a hold for State Capitol Police and the U.S. Marshals Service. According to the jail roster, he is being held in lieu of $5,000 bond on the state charges.

On the federal charges, Kearney advised Miller-Marshall that if he is convicted, he could face up to 10 years in prison and a $10,000 fine on each count.