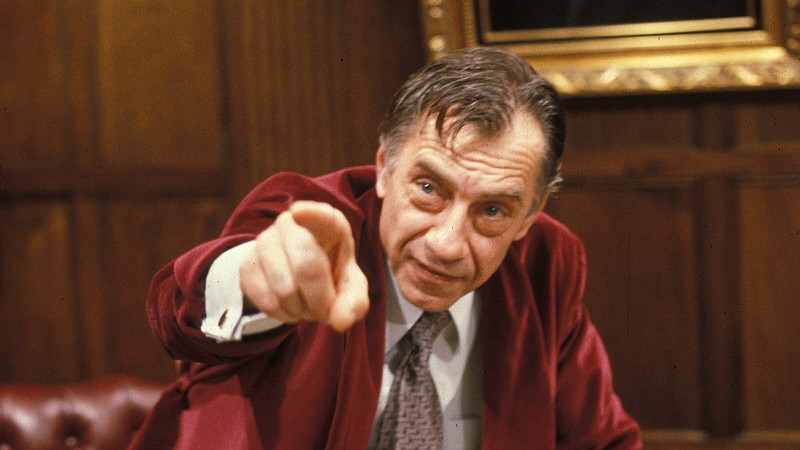 In 1984, Robert Altman cast Philip Baker Hall in “Secret Honor,” a movie with no other characters — essentially a 90-minute monologue by Hall as President Richard Nixon. Though the film wasn’t widely seen, it persists in our cultural memory as one of the great acting feats on film.

When actor Philip Baker Hall died earlier this week at the age of 90, he left behind 185 screen appearances as well as several plum stage roles. If his name doesn't seem familiar you might have spotted him as Lt. Bookman on "Seinfeld." He was so determined to collect two decades of library fines that he made Inspector Javert in "Les Miserables" seem laid back in comparison.

Hall also had memorable roles in "Modern Family" and starred in Paul Thomas Anderson's first three films: "Hard Eight," "Boogie Nights" and "Magnolia." His lengthy list of credits seems even more formidable considering that he didn't start acting until he was 30.

Hall had several roles that showed off his range and his ability to command his viewer's attention, but a single performance demonstrates why the movies will miss him.

In Robert Altman's "Secret Honor," it would have been impressive to merely say Hall made audiences rethink what they thought of Richard Nixon in 1984. Movies and TV shows that had touched on Watergate either portrayed the former president as a shifty caricature or, in "All the President's Men," didn't depict him at all.

The actor delivers an engrossing and kaleidoscopic take on Tricky Dick, and does it so well that after 90 minutes, you almost forget he's the only person in the movie.

Hall was not an admirer, but he and screenwriters Donald Freed ("Executive Action") and Arnold M. Stone take us inside Nixon's wounded and tormented mind. "Secret Honor" is adapted from a play, but Altman and Hall make a virtue of the claustrophobia that often comes from seeing stage work moved to the screen. Altman had a special camera rig made that could smoothly follow Hall as he frantically paces through Nixon's study.

Hall's Nixon is attempting to dictate a book and a defense of his actions in public life, but he's battling decades of resentment and his own inebriation. One second Nixon will be forcefully mounting a defense of his client (himself) and why he didn't need a pardon and would have triumphed in a Congressional hearing. In the next, he's cursing as he loses his train of thought.

He's now using a cassette recorder that is more user-friendly than the White House system, but he's continually telling the unseen Roberto to erase his latest rant.

It's a testament to Hall's work that viewers will remember the outbursts and the heartbreak even if Roberto does manage to remove all of Nixon's babbling. Hall simply slicks back his hair and makes little effort to imitate Nixon's once ubiquitous voice and gestures.

By using his own raspy delivery instead, Hall forces viewers to hear what Nixon has to say with fresh ears. Without the deep familiar voice impersonators loved mocking, even the familiar parts of the president's story seem new. When Anthony Hopkins played the role in Oliver Stone's "Nixon," he wisely followed Hall's example and made Nixon seem more real in the process. It's telling that original stage director Robert Harders provided Hall with little supervision. As the film proves, his instincts were nearly flawless.

It's impossible not to be moved when Hall's Nixon recounts losing two brothers to tuberculosis or the hurt he feels knowing his own father distrusted lawyers and politicians.

He admits he may have been unfair to political opponents and yells at portraits of Dwight Eisenhower and Henry Kissinger, angry that he has often done dirty work for public figures whose legacy may be just as tainted as his own.

Whether he's bellowing or whimpering, Hall gives every syllable his all, even if it's not a word. If his Nixon can't quite give the grand defense of his legacy, the isolation of the study is maybe the only time Nixon may ever face the emotional toll his career has taken on him.

Hall is often manic but never hammy. His crescendoes break down before any artifice is noticeable. "Secret Honor" was shot over a week and a-half at the University of Michigan where Altman was teaching. In the '80s, Altman's hits like "MASH" and "Nashville" were behind him. That said, working on such a unique project as "Secret Honor" helped prove his later comeback with "The Player" wasn't a fluke.

Hall delivered his scenes in 15-minute takes. In addition to memorizing an encyclopedia's worth of text, he also had to synchronize his movements with cinematographer Pierre Mignot and operator Jean Lepine's acrobatic camera work.

It was so exhausting that the star and the director took naps between takes and had beds off set.

Incidentally, the title "Secret Honor" refers to Nixon's assertion that he actually set up Watergate as a way of preventing his wealthy Bohemian Grove benefactors from causing more danger to the United States than he ever could. Hall leaves it to us to figure out if Nixon is bamboozling us or himself with that assertion. Stone and Altman indicate Nixon may have gotten the wrong end of a Faustian deal.

Hall was certainly lucky with the material he had and how Altman expertly captured his performance. Curiously, Hall had to wait to see the rewards. Director Anderson adored "Secret Honor" and cast Hall based on his work in it.

Like Anderson, I had to work to find the movie and ended up buying a used VHS copy from a Hastings in Topeka, Kan. Other fans must have liked it, too. I ended up selling it to a video store in Kansas City for a small profit.

The movie is playing on the Criterion Channel and comes with commentaries from Altman and Freed. Hall gets to spend 22 minutes recounting the role as well. Neil Young wondered if there was a place where even Richard Nixon had a soul. For 90 minutes, Hall gave him a great one.