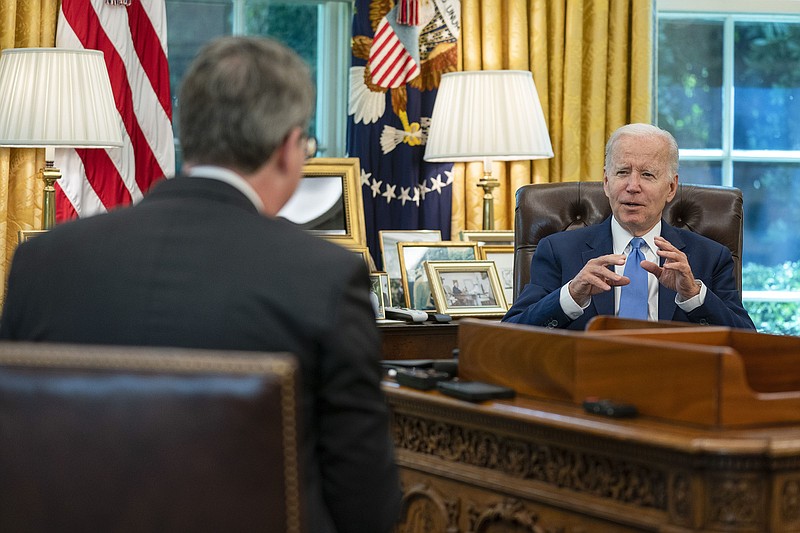 “The need for mental health in America, it has skyrocketed, because people have seen everything upset,” President Joe Biden said, adding it’s a consequence of the covid crisis. (AP/Evan Vucci)

WASHINGTON -- President Joe Biden said Thursday that the American people are "really, really down" after a tumultuous two years with the coronavirus pandemic, volatility in the economy and now surging gasoline prices that are slamming family budgets. But he stressed that a recession was "not inevitable" and held out hope of giving the country a greater sense of confidence.

Speaking to The Associated Press in a 30-minute Oval Office interview, the president emphasized the battered economy and the lingering psychological scars caused by a pandemic that disrupted people's sense of identity. He bristled at claims by Republican lawmakers that last year's covid-19 aid plan was fully to blame for inflation reaching a 40-year high, calling that argument "bizarre."

As for the overall American mindset, Biden said, "People are really, really down."

"The need for mental health in America, it has skyrocketed, because people have seen everything upset," Biden said. "Everything they've counted on upset. But most of it's the consequence of what's happened, what happened as a consequence of the covid crisis."

That pessimism has carried over into the economy, as record prices at the pump and persistent inflation have jeopardized Democrats' ability to hold on to the House and Senate in the midterm elections. Biden addressed the warnings by economists that fighting inflation could tip the United States into recession.

"First of all, it's not inevitable," he said. "Secondly, we're in a stronger position than any nation in the world to overcome this inflation."

As for the causes of inflation, Biden said, "If it's my fault, why is it the case in every other major industrial country in the world that inflation is higher? You ask yourself that? I'm not being a wise guy."

The president said he saw reason for optimism, with the 3.6% unemployment rate and America's relative strength in the world.

But restoring confidence so far has eluded Biden, whose approval ratings have been in steady decline.

His Oval Office is filled with the portraits of presidents who faced crises that have imperiled the country, and Biden acknowledged there were parallels to his own situation. A picture of Franklin Delano Roosevelt hangs over his fireplace, a place of prominence because the historian Jon Meacham told Biden that no president had come into office with the economy in such dire circumstances. There is also a painting of Abraham Lincoln, who became president with a nation brutally divided and on the verge of the Civil War.

Yet Biden's remedy is not that different from the diagnosis made by former President Jimmy Carter in 1979, when the U.S. economy was crippled by stagflation. Carter said then the U.S. was suffering from a "crisis of confidence" and "the erosion of our confidence in the future is threatening to destroy the social and the political fabric of America."

The president said he wants to endow the U.S. with more verve, fortitude and courage.

"Be confident, because I am confident we're better positioned than any country in the world to own the second quarter of the 21st century," Biden said. "That's not hyperbole, that's a fact."

Biden's bleak assessment of the national psyche comes as voters have soured on his job performance and the direction of the country. Only 39% of U.S. adults approve of Biden's performance as president, according to a May poll from The Associated Press-NORC Center for Public Affairs Research, dipping from already negative ratings a month earlier.

The president outlined some of the hard choices he has faced, saying the U.S. needed to stand up to Russian President Vladimir Putin for invading Ukraine in February even though tough sanctions imposed as a result of that war have caused gas prices to surge, creating a political risk for Biden in an election year. He called on oil companies to think of the world's short-term needs and increase production.

Asked why he ordered the financial penalties against Moscow that have disrupted food and energy markets globally, Biden said he made his calculation as commander in chief rather than as a politician thinking about the election.

"I'm the president of the United States," he said. "It's what's best in the country. No kidding. No kidding. So what happens? What happens if the strongest power in NATO, the organizational structure we put together, walked away from Russian aggression?"

Biden spun out the possibility of chaos in Europe if an unimpeded Russia kept moving deeper into the continent, China was emboldened to take over Taiwan and North Korea grew even more aggressive with its nuclear weapon ambitions.

Biden renewed his contention that major oil companies have benefited from higher prices without increasing production as much as they should. He said the companies needed to think of the world in the short term, not just their investors.

"Don't just reward yourselves," he said.

Consumer prices have jumped 8.6% over the past year, the steepest rise in more than 40 years. Republican lawmakers have said that Biden's $1.9 trillion coronavirus relief package from last year kick-started a spiral of price increases.

The president said there was "zero evidence" for that claim, noting that other countries have endured higher prices as economies reopened and people became vaccinated. Still, Biden acknowledged Treasury Secretary Janet Yellen's contention that the spending had a limited inflationary effect.

"You could argue whether it had on the margin a minor impact on inflation," he said. "I don't think it did. And most economists do not. But the idea that it caused inflation is bizarre."

Still, high inflation has created a conundrum for Biden. He prioritized bringing back millions of jobs and has seen the unemployment rate return to close to pre-pandemic levels. The Federal Reserve on Wednesday increased its benchmark interest rate, in hopes of slowing the economy and pulling inflation down to its target rate of 2%.

The tightening of Fed policy has caused financial markets to slump and led many economists to warn of a potential recession next year. The president encouraged Americans to stay patient.

"They shouldn't believe a warning," he said. "They should just say, 'Let's say let's see which is correct.'"

The president is still trying to steer his domestic agenda through Congress, after an earlier iteration last year failed to clear a 50-50 Senate. Biden said "I believe I have the votes" to lower prescription drug prices, reduce families' utility bills with tax incentives and place a minimum tax on corporations. He said his plans would lower expenses for many Americans, though the measure would be scaled back from earlier intentions for an expanded child tax credit, universal pre-kindergarten and other programs.

"I'm going to be able to get, God willing, the ability to pay for prescription drugs," Biden said. "There's more than one way to bring down the cost for working folks. Gasoline may be up to $5 a gallon, but somebody who has a child with stage two diabetes is paying up to 1,000 bucks a month. We can reduce it to 35 bucks a month and get it done."

And then, in acknowledgement of the political restraints he faces, Biden added, "I can't get it all done." 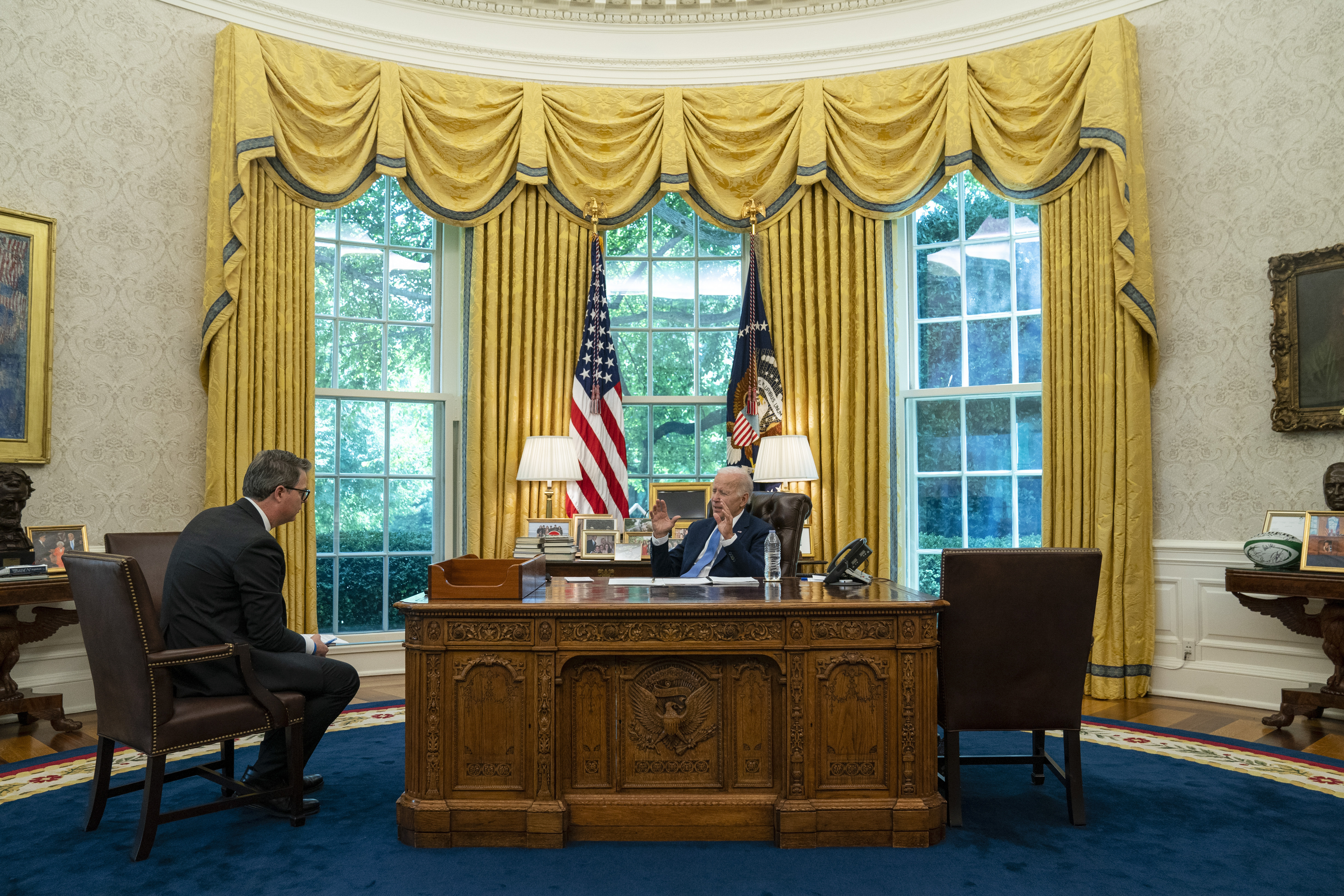 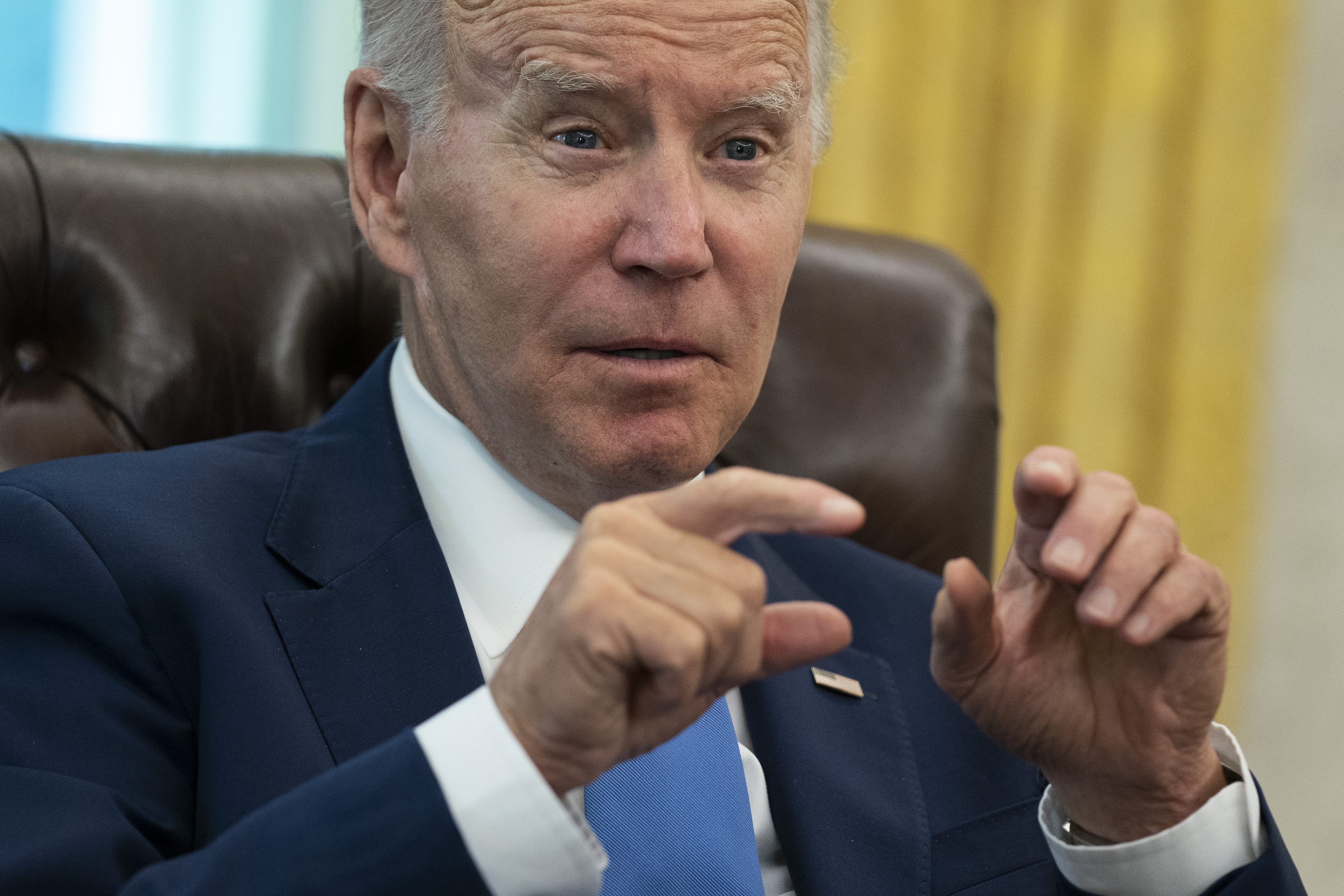 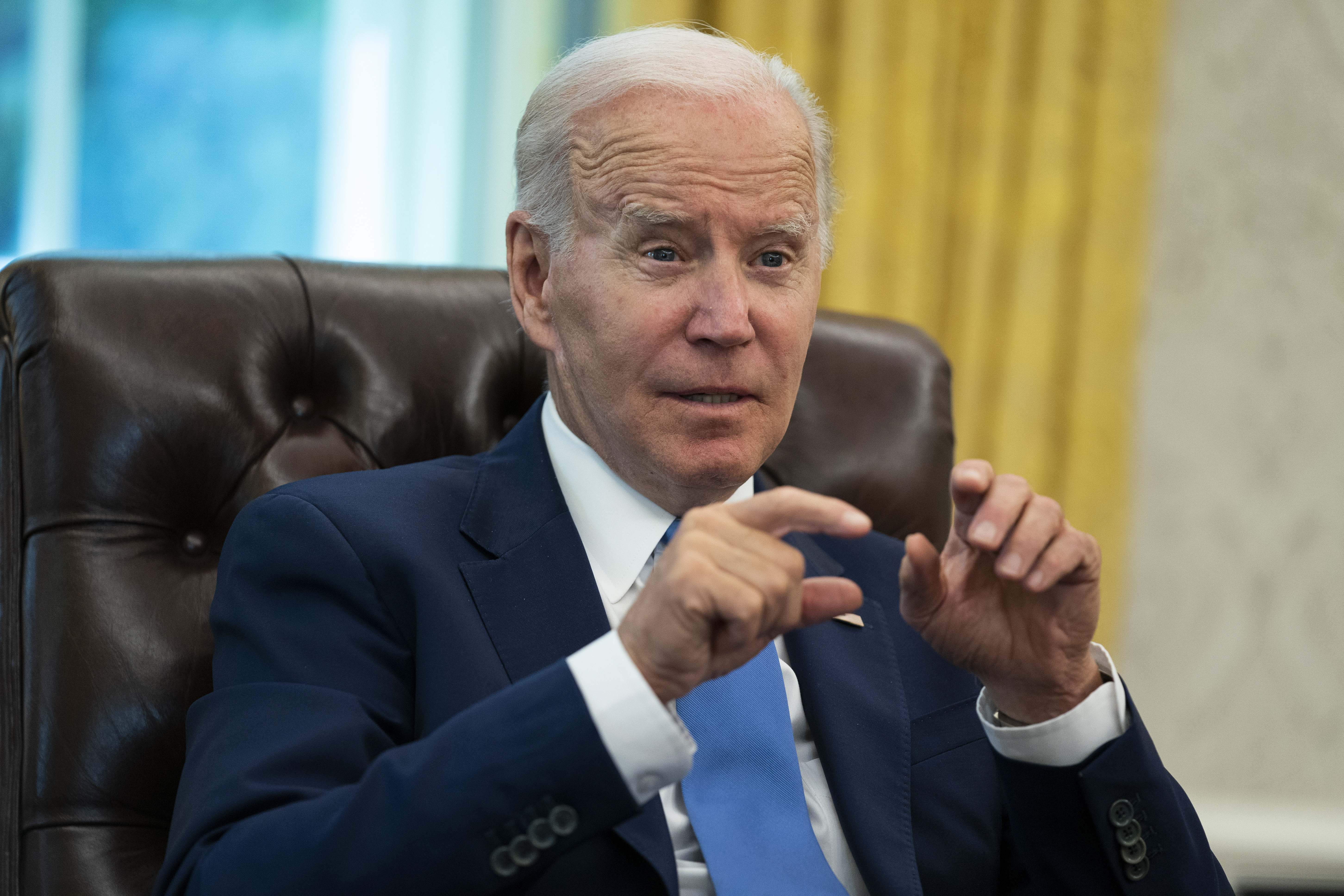 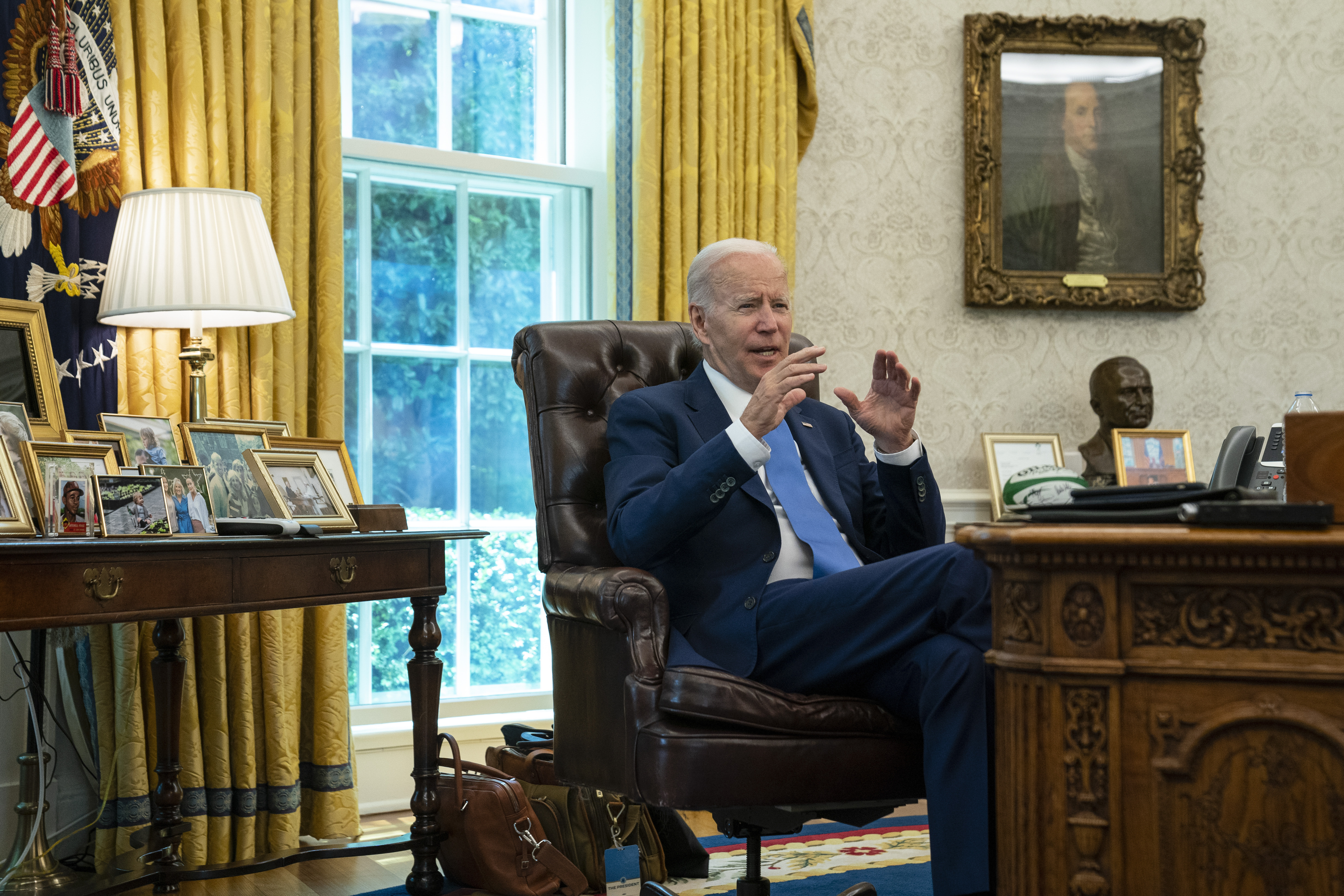 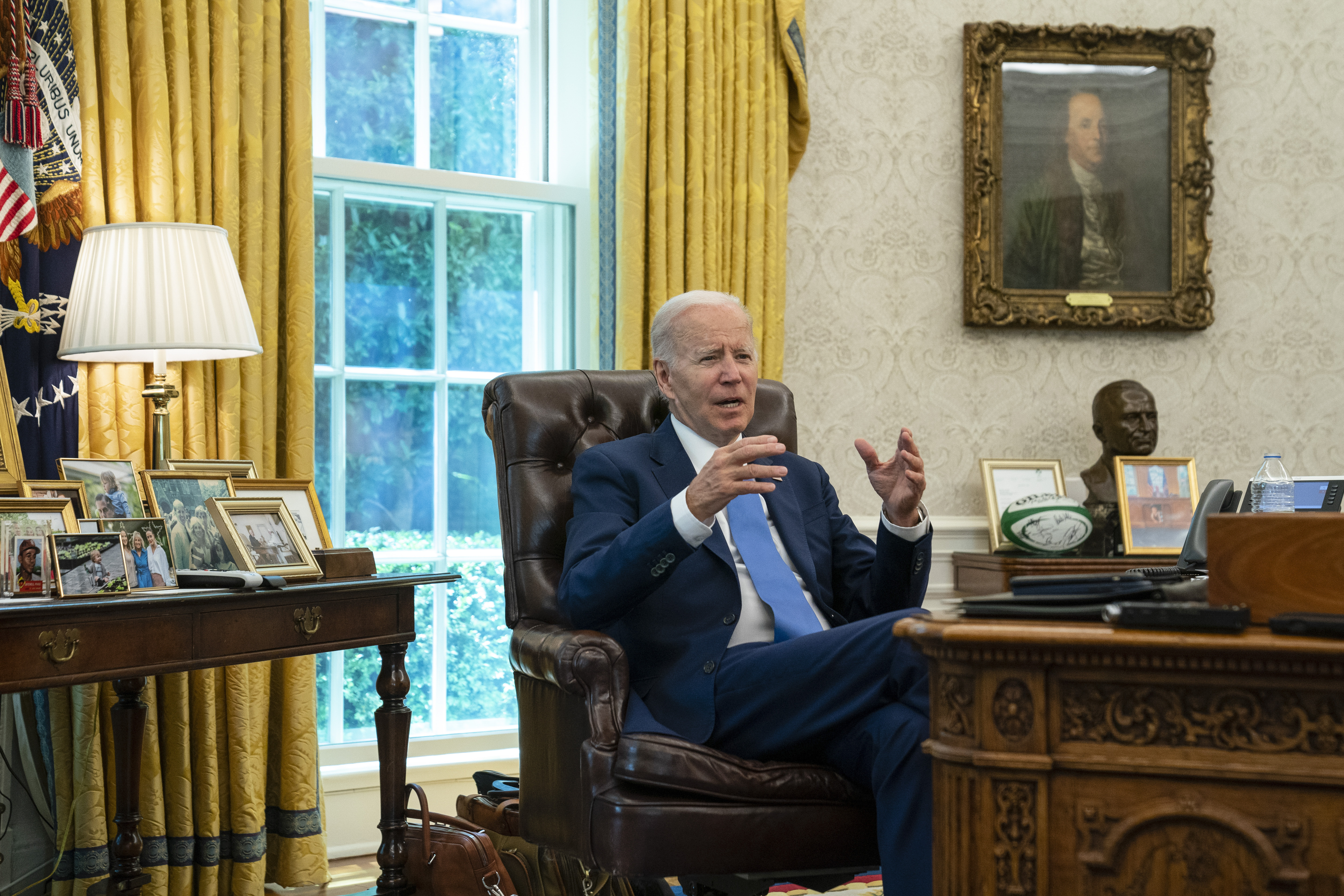 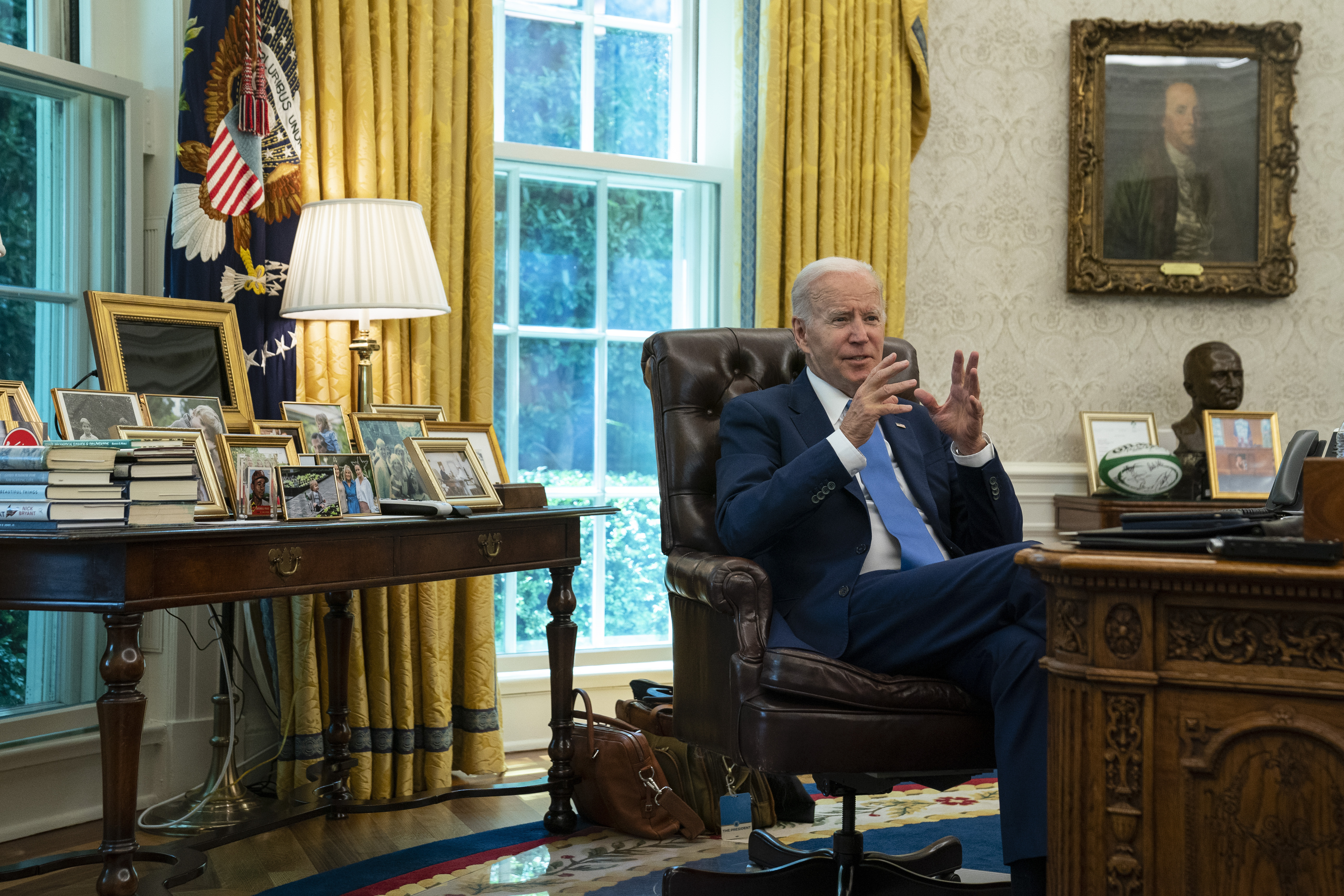 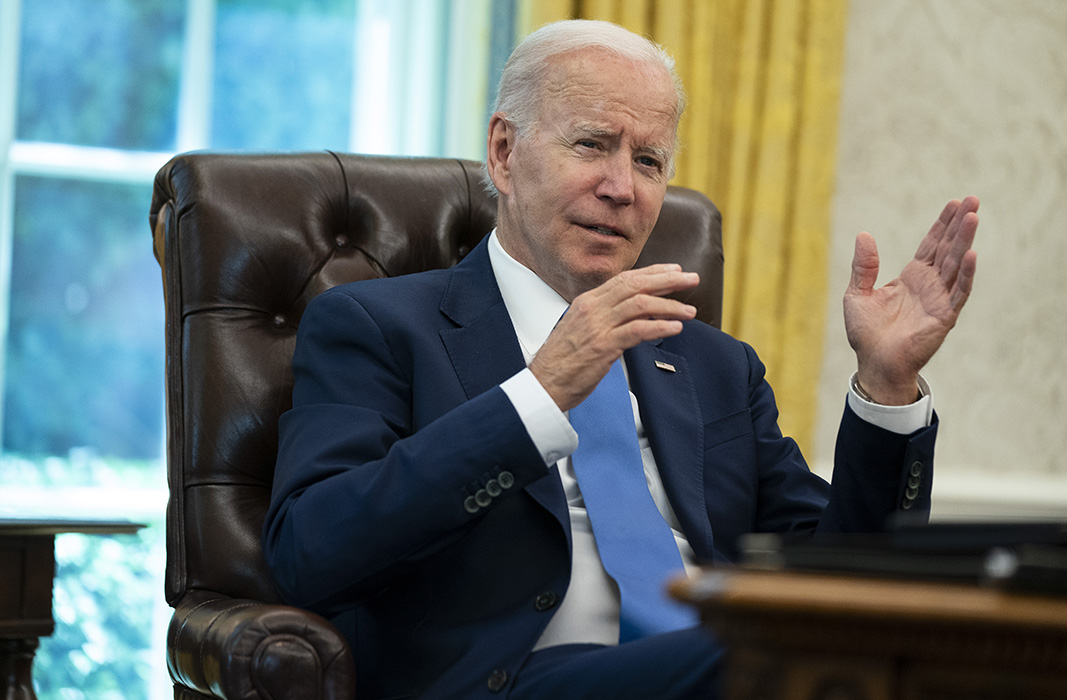 President Joe Biden says a recession is not inevitable despite economic volatility, surging gas prices and continued struggles with the coronavirus. (AP/Evan Vucci)